After getting to my sister’s home Wednesday nite we took most of Thursday easy.  Later in the evening my sister, nephew, and I went to Disney Springs to hang out for a while since I’d not been after the change over from Downtown Disney. I had Blaze Pizza for dinner and it was good.  Then on Friday morning we headed into Orlando around 11 AM on our way to SeaWorld Orlando. We were fortunate that my nephew was able to get us tickets thru work at no cost. We had to meet him and some of his work mates there, and once we arrived at the park I saw a packed parking lot.

Of course I knew it would be busy, this being one of the busiest times of the year in Orlando. Normally I wouldn’t want to go to a new park on such a busy week, but it worked out pretty well. We got in line for the tram, but that line was massive so we just walked over to the front entrance and met everyone. I’d been texted the previous day that it was around a 45 minute wait just to get tickets and get inside the park, and this was obvious when you got to the gate. We, however, walked over and got in the ten or so minute line to get in the front gate. Our first stop once inside was to Guest Services as my sister wanted to get a Handicapped Pass, since she has some major back issues and other health problems, so standing in line wasn’t really an option for her.

Once we had that in hand we went to the restrooms and started our day. We passed by some pink flamingos, then Manta on our way over to check out Kraken. I wasn’t interested in the VR, neither was my sister. We went to the entrance and, although the park was super packed, the lines were never bad, save for Manta. And the way they handle the handicapped pass is that you give them the sheet for eligible rides and they give you a return time, much like Disney. They basically looked at the wait time and assigned your time based on that. With Kraken being a 30 minute wait we were asked to come back in 30 minutes for our timed ride. As we walked back towards Journey to Atlantis we noticed that it was a walk-on, so we headed there first. 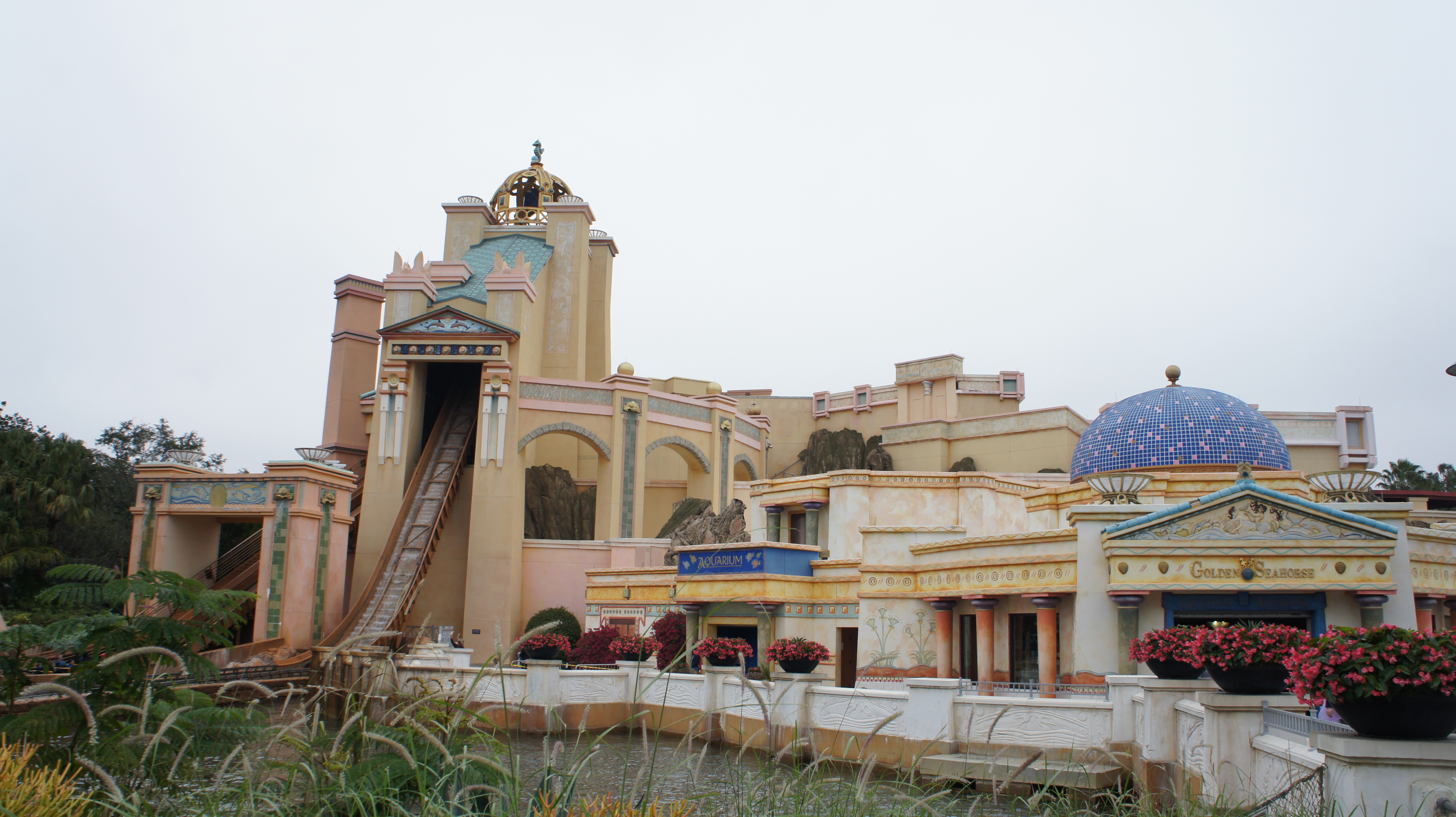 Journey to Atlantis–I’d read about this ride quite a bit and watched POVs. Interestingly enough, I knew that most of the effects no longer worked, and that was the case this day. You head into the first themed section which, according to what I’d read, was something about a fisherman, a fairy or some such something, and then an attack by a stationary Medusa like creature that was supposed to attack you before going up the first lift. The first drop out the front  show building was fun and you get pretty wet, which wasn’t great when it’s in the 40s in Orlando. Then you splash around, head up inside the building again where none of the theming works, and then there was the coaster section behind the building before you hit the brakes. I think it could be much better, I wish they’d fix the theming though.

At this point we were ready to head over for our ride on Kraken. You head up the exit stairs and get in the Quick Queue line. After a few moments a ride attendant came down and got us and put us in line for the next train.

Kraken–Loading was…long, at best, but oh well. Of course I never rode prior to the new version of Kraken, but the coaster itself hadn’t changed. I liked the first drop, loop, inversion, etc. I wasn’t aware that the ride dove into deep trenches as much as it did. It may rank as one of my most favorite floorless coasters once I think about it some more. Then you end with a dive into an underground lair before hitting the final brake run. 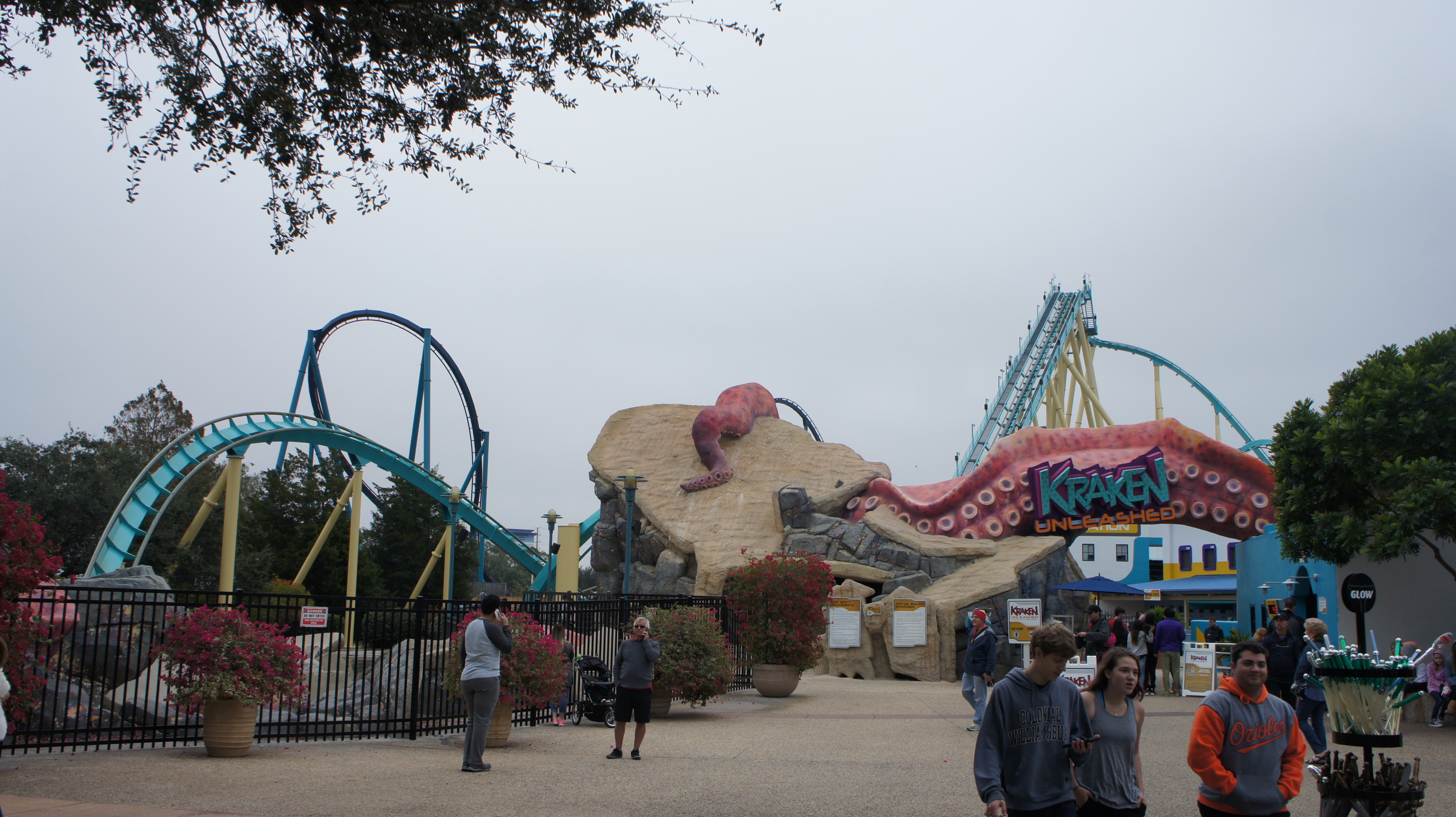 We walked over towards Mako to get a return time. As we were able to get into the park for free we’d decide to take advantage of the all you can eat day pass, so after getting a 30 minute return time we went to order our food pass on my phone which was a pain in the backside, as the Sea World app kept opening up the website and it wouldn’t add the food option to the cart, ugh. But we finally got it to work after several tries and lots of annoying grunts. Afterwards we walked over by the shark feeding area. We hung out by the shark area and asked if the shark restaurant was on the all you can eat pass (It’s not, but you get a 30% off with it). Then we went by a bird enclosure to look at the birds, before walking thru the Antarctica section. Soon it was time for our ride on Mako, so we headed back over.

Mako–I had heard great things. My sister had ridden it before and loved it. I liked the shark effect on the ceiling. We were strapped in and ready to go. The first drop was major. I loved it. Very Fury-esq, just obviously not as tall. This would have been a great opportunity to add in some major sideways airtime, but we didn’t get any. Bummer, but the next element was still fun. Then you hit another large hill with airtime, the turnaround, then three more hills in rapid  succession with B&M’s standard floaty airtime. After the mid-course brakes you have several small hills, some high banked twists and turns, a dive down by the lagoon, and then the final brake run. The ride was really great.

After Mako we went to get something to eat and, while in line, my sister ran into someone she graduated with. We then ate on the waterfront porch. After lunch we went back to Antarctica to get a return time for Empire of the Penguin, which was a 45 minute wait. This gave us ample time to rest. I’d planned to walk around the park as my sister sat for a while and rested, but there was a 20 minute dolphin show getting ready to start, so we went to watch that instead. The show was good, featuring several dolphins and birds, but the music was corny. After the show ended we walked the long way around the park before going to our next ride. 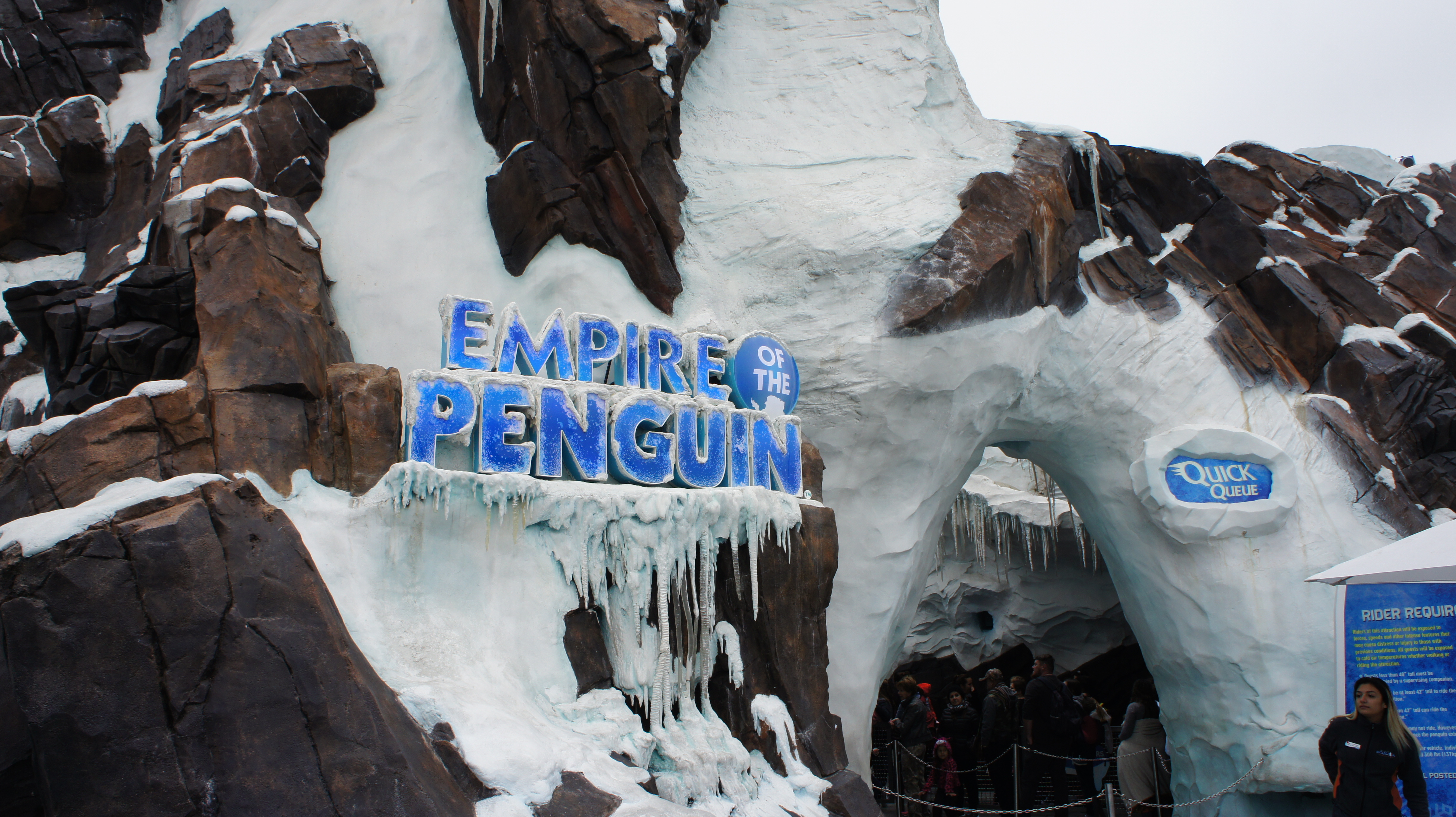 Empire of the Penguin-I have to say, I had decently high hopes. I’d read some decent reviews, but nothing much about the ride experience. The area was very well done, and the pre-show was cute. When I realized it was one of the trackless rides, I was very excited, especially finding out that the ride vehicles spin and bounce. We boarded and…it was over like two minutes later. I mean, the ride section was well done, but it was waaaayyyy too short. We stayed and watched penguins diving at the end of the ride for a bit before leaving the ride.

The day was getting long and we had yet to ride Manta, so we went to get our return time for that. It was about a 30 minute wait. My sister decided to sit by the entrance as I walked around the park by myself for some photos. I walked over by the dolphin nursery and over by the lake. I walked around and saw that there was a Shamu show starting later, which would be a great way to end the day. I walked by the area where the new rapids ride for 2018 was going in, then back across the wooden bridge, eventually making it back to Manta to meet up with my sister and get on the ride.

Manta–I do want to mention that I liked the printed net under the lift with the manta ray design on it. That was cool. So I’d ridden Acrobat back in September of 2017 at Nagashima Spa Land, which was an exact clone of Manta, meaning I knew what to expect. Granted, this version had slightly nicer scenery, though both rides were well done. And they both had the splash element. I liked the familiar first drop and pretzel loop. One good thing about these layouts is that after that its a decent run at swoops, turns, and some inline twists, not at a high enough speed that makes you sick, especially after the massive positive Gs on the pretzel loop. This was my sister’s first flying coaster. She was not amused. It will likely be her last. 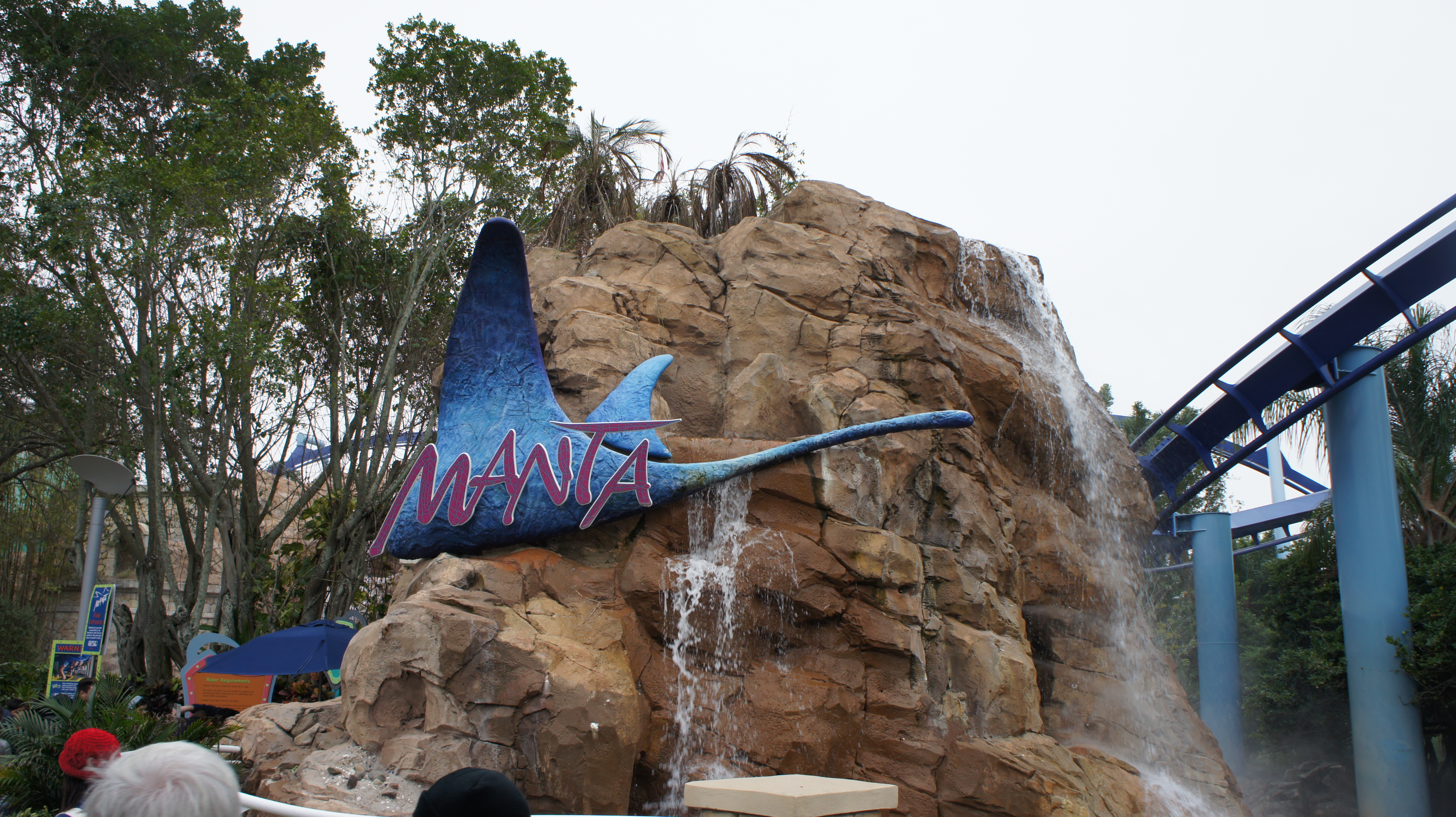 After this my sister definitely needed a break from rides, so we went in to the aquarium.  She rested near the entrance to one of the underwater viewing tunnels. We wanted to use our food pass again as some time has passed, so I suggested that we eat dinner, check out the shark encounter, then watch the Shamu show. After all of that we’d have another shot to use our food pass one more time before leaving. The shark enclosure was really decent, and larger than I’d expected.

We decided to head on over to the stadium and get decent seats for Shamu, which was a good call. We were able to get really decent seats before it filled up, sit and rest for a while, run to the restroom, and watch the show. It was really well done. I know these shows are on their way out, but I enjoy seeing the Orcas. If they’re going to end up getting rid of the shows everywhere, I hope that they do end up making large habitats for the Orcas that people can see and have some limited interact with them up close.

It was time to start heading out of the park. We stopped at a bakery and I got a really good oreo cheese cake, then we went towards the entrance and backtracked to another restaurant to have another small snack. The park was still open for a couple of hours but we were done. We went to the front of the park and took the tram to the overflow lot.  I really liked Sea World. This one was playing a mixture of themed music and Xmas music, unlike the park in San Antonio, which played no music other than around some of the rides. But I enjoyed myself. It was a long, leisurely day. I got all of the major credits, save for the kiddy coaster as we barely walked thru that section. Next time I’ll go when the weather is a little nicer and watch more shows.