As I’d taken two weeks off in September of 2017 to visit Japan I really hadn’t planned a lot of domestic travel in 2017. I knew getting back from Japan would lead into a busy time. The following two weeks after my return to the US were busy with local events including a work trip at Kure Beach. Then there was a pre-planned trip with friends in October to Atlanta. I took most of November easy, but I knew that December would be another busy month to cap off the end of the year. I had tickets to see Janet Jackson in Columbia, SC and Atlanta, GA which were rescheduled dates from her Unbreakable World Tour, renamed the State of the World Tour, at the beginning of December. These were the last two dates of that leg of the tour. Needless to say, I was busy.

Earlier in the year I had the opportunity to request 2 days of vacation in between Christmas and the New Years holidays at work, which meant I would have 10 days off in a row. I didn’t plan out anything, but in the back of my mind I had considered spending part of the time in the Orlando area as my sister and her family have been there for 6 years and I’d only made the trip down once. Eventually I made the commitment and let my sister know I’d be down for the latter half of my time off. Time slowly approached and soon it was Friday.

Some more back story, during my trip to Japan there was a position at an office very close to my house that I’d hoped to transfer to before the year’s end. I knew the position would be available, but unfortunately due the incompetence of some human resource employees I missed my chance at an interviewee even though the local management team tried to set up a phone interview while I was abroad. However, in a surprising turn of events, 2 more unexpected positions became available before year’s end. I was able to secure an interview this time, but the wait in between interviewing and finding out whether I was selected for a position was nearly a month an a half. I was in a bad mood during most of that time, but 3 days before the start of my vacation I received confirmation that I would be transferring, starting effective the first of the year. 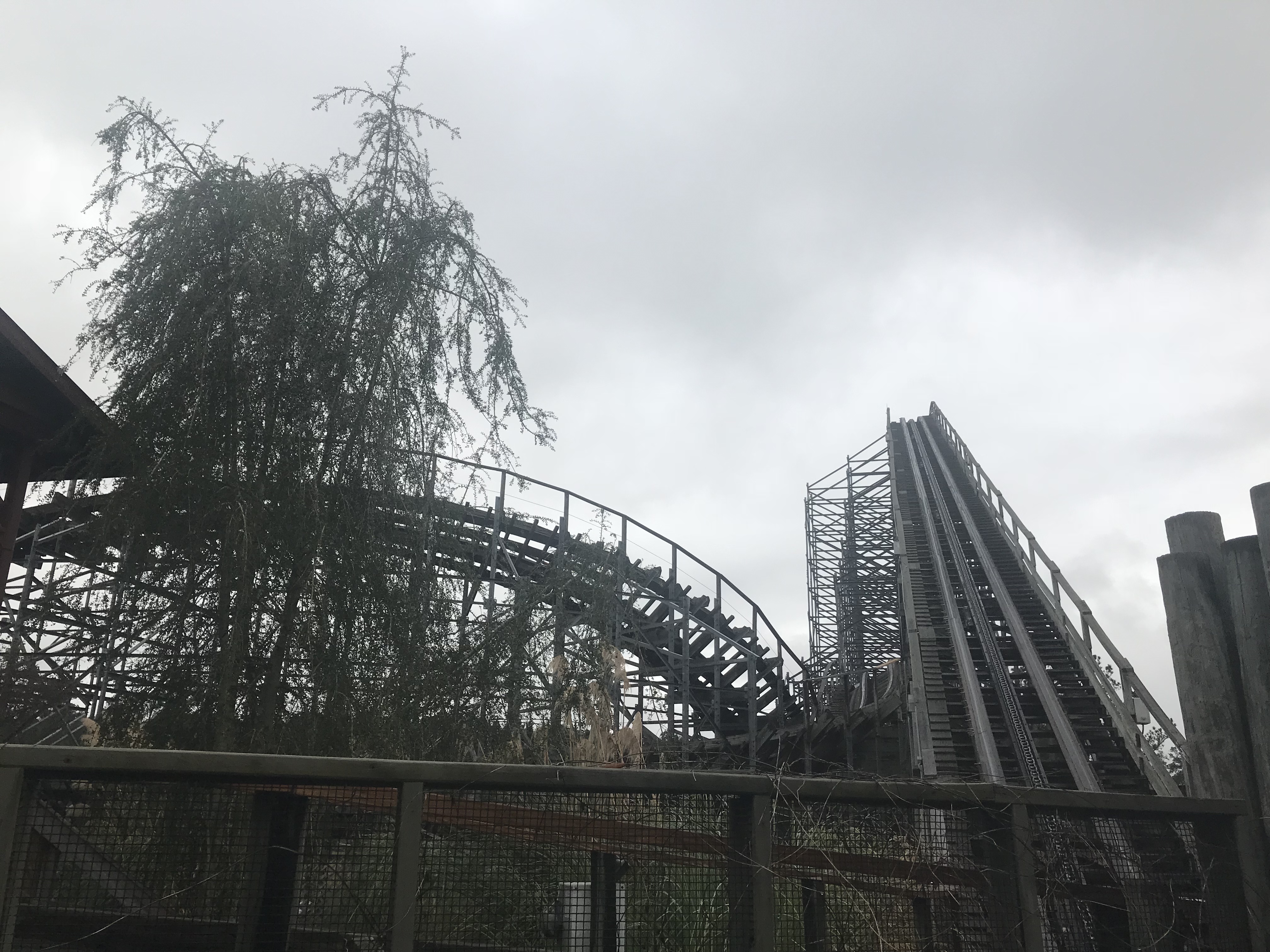 As Friday approached, not only would I be leaving for vacation, but I would be leaving my old office in order to start at the office closest to my home on January 1. Now I had 10 days to celebrate. The first part of my time off was spent with friends, packing for the trip, and cleaning house. Unfortunately I also spent an entire day sick with food poisoning, which threw off my schedule. Wednesday morning, however, I was up and ready to go at 5:40 AM. Or so I thought.

I packed up the car and headed down the road a little after 6 AM. I knew I needed gas so I stopped at the local gas station, but my debit card gave me issues at the pump. I’d planned to get some gas now and fill up once in South Carolina where it was much cheaper. It told me to see the cashier, so I went inside, grabbed a bottle of water, and tried to get some gas. No luck. It was denying my debit card while not giving a reason. And I had checked my balance before leaving the house, so I knew there was money there.

I had to go out, get in my car, and call my Credit Union’s hotline to find out what was going on. They let me know it was locked due to potential fraud. I assumed maybe it was because of the Wild Adventures Groupon I’d ordered the day before. But once I was connected, apparently my card had been skimmed, perhaps when I was in Atlanta or Columbia, and thereafter someone tried to get money in Orlando (imagine that…). They were able to unlock my card so I could fill my tank up and get some money out, so I got gas and went back in to get my water, then I was off.  Almost. I drove to the entrance ramp for I85 and headed to Bojangles for breakfast. When I went to pay, though, I realized that the cashier had only given me $3 from the $20 I’d given her for my bottle of water. 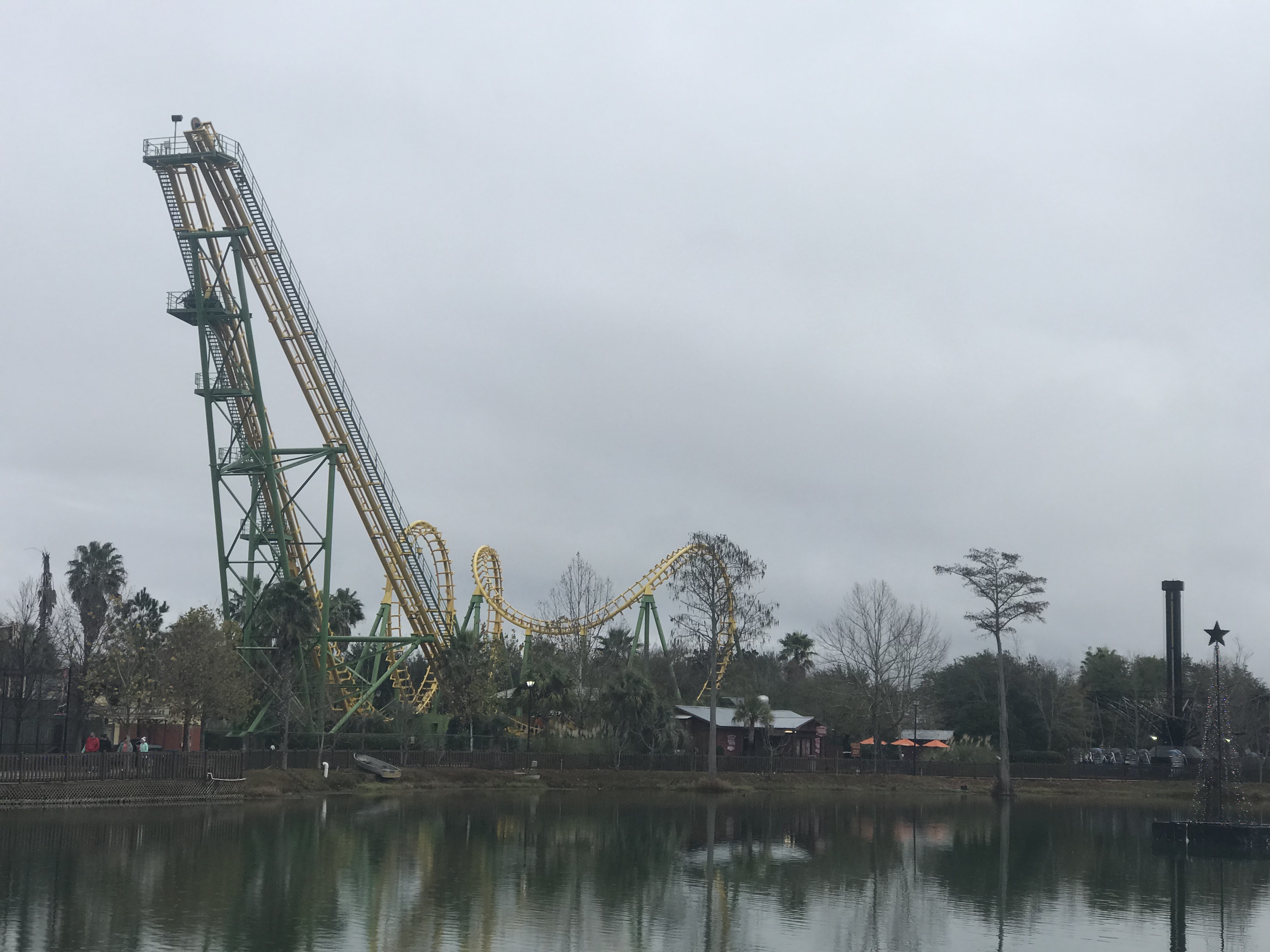 I couldn’t figure it out at first, and with the issues I was having, the $15 was going to be needed since my finances were going to be frozen for the next two days, requiring a call any time I needed to use an ATM. So I drove all the way back, then on the way realized the cashier had charged me for the $15 in gas I initially was going to purchase, though I’d filled up on my card. So I went in as the cashier was staring at her register trying to figure out what was going on. She thought I’d left without getting gas. So we cleared that off and finally, FINALLY, I was on my way south.

And as I headed south I was heading to Wild Adventures in Valdosta, GA. I’d never been there and since it was open and wouldn’t be too far out of the way, I decided to check it out. But the further south I went, the gloomier and wetter it got. Bummer. I had already purchased the Groupon ticket and it expired in April of the following year, but I didn’t see me getting back to Wild Adventures anytime soon, so I decided to head down and potentially maybe get a ride or two on some of the coasters.

Around the 7 hour mark my GPS had me turn onto a dirt road. I thought this was odd to say the least, but I knew Wild Adventures was out in the middle of no where in southern Georgia. So I made my way across the dirt road and came out on the other side just in view of the coasters. Granted, I saw none of them running, but eventually I did see the Star Flyer go up and the parking lot was far from empty. So I headed in. 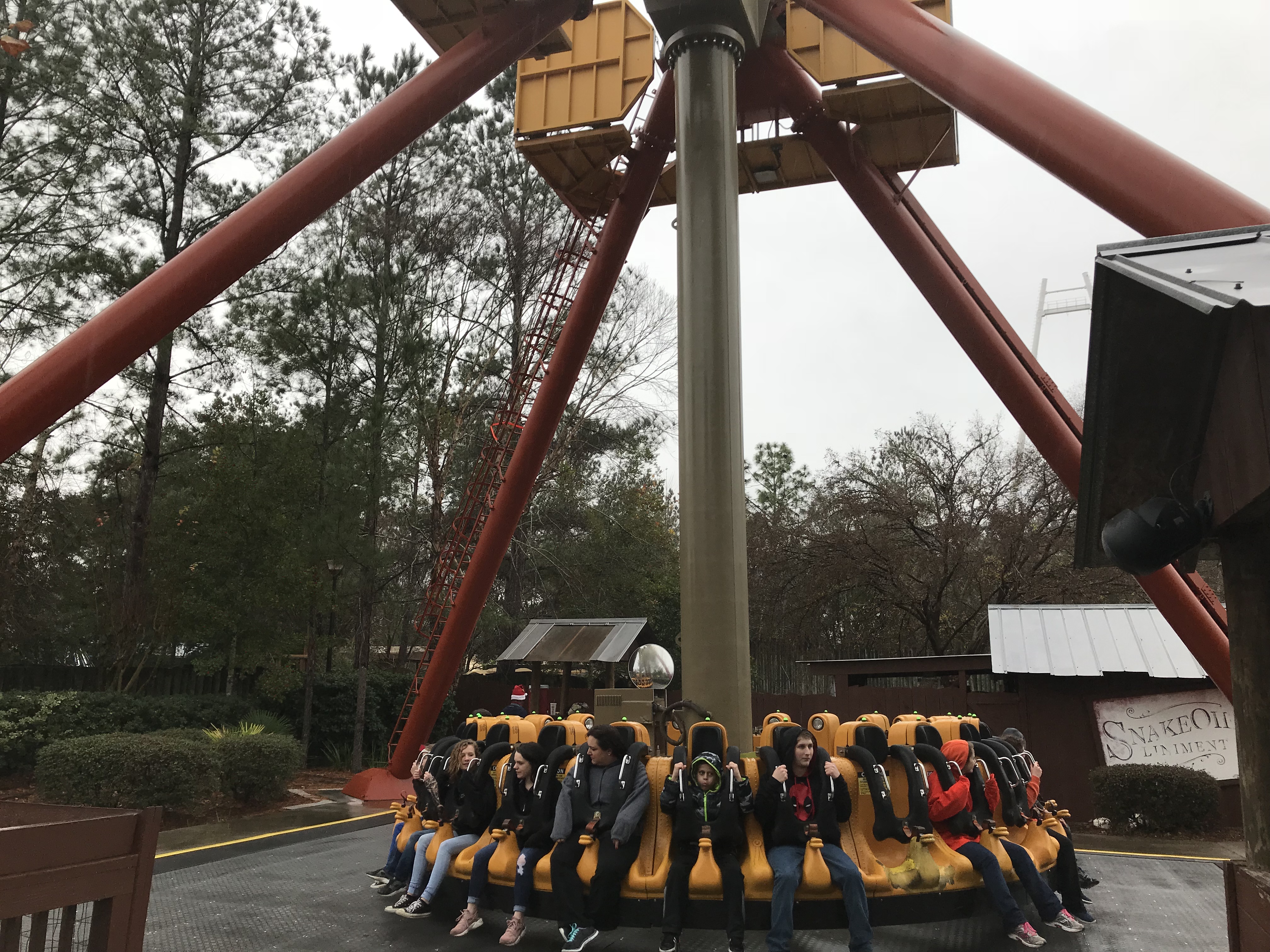 The rain had mostly let up. I headed into the front of the park and around towards the back looking for a restroom. After a brief pitstop I noticed parts for their 2018 addition, large bug parts strewn in the back area of the amphitheater. Then I made my way around towards the park’s SLC. I really did like the paint scheme, but the ride was not yet running or even testing. So I went on and made my way around to Cheeta, as I heard the chain lift engage, then saw a train head up the hill. It was time for my first credit of the trip, and the one coaster here I was really looking forward to riding.

Cheeta–I’d wanted to ride this coaster out for a very long time as it was the smaller cousin to the defunct Myrtle Beach Pavilion Hurricane. Once dispatched you turn left and head up the 90 foot hill. The first drop was really great. I was sitting in the back of the train and it pulled over rather quick. At the top you got a good view of not only the coaster’s layout, but large swaths of the wild animal park included with admission. Then you drop. Then its up into a series of hills before the turnaround, then up into another hill. Then its a dip, drops, and over two bunny hops before you head up and then down into a figure 8 section. Theres a bunny hop over the tracks in the middle, then at the end another hill, then hop up into the brakes. Cheeta was fun, if a bit rattly. It would definitely benefit from a full retracking, and honestly I’d love to see Timberliner trains added, but otherwise I liked it.

After Cheeta I noticed that the SLC was testing so I went back to see if it was open. The ride was going, but they were not open yet and weren’t sure if it would open as they were trying to get it warmed up as it was in the forties. Next up I’d have loved to have ridden the Miler coaster but it wasn’t testing and no-one was even in the station or around it. Bummer. Another ride that I saw running, though, was the drop tower, a small S&S shot tower. I was able to get on it and enjoyed the air time at the top. Right beside that was Rattler, the park’s 24 seat Moser Sidewinder. I really liked this version of the ride. It wasn’t very large, and was great for a smaller park. It gave a great cycle and was very comfortable. 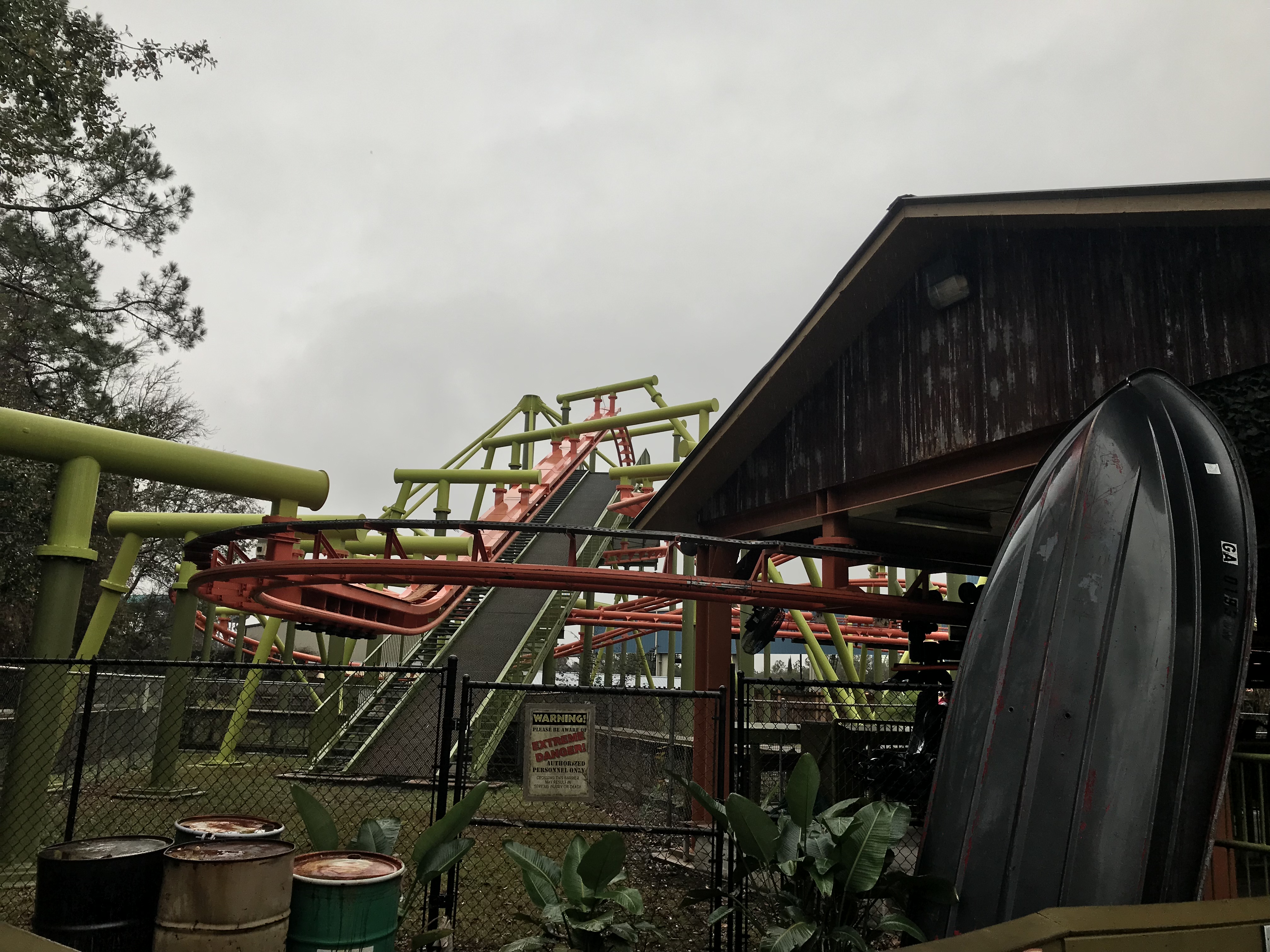 I noticed after Rattler that Boomerang was testing so I headed across the park next. While the park wasn’t very busy many of the rides were opening. The rain would come and go but mostly held off during my 90ish minute visit. So I rode Boomerang in the front row. I liked the paint scheme, but alas, it is just another boomerang. One ride I hadn’t counted on riding was the park’s Jr. SLC, Swamp Thing, but surprisingly enough I fit. Usually I have a hard time with my height getting the restraints to close, but since there was no line I decided I’d give it a try and had no issues. I liked the theming and that it went over the alligator pit.

I went thru a small aviary and took some photos before heading to Ant Farm Express the Roller Skater. I rode all by myself. Sadly, the Mouse right beside it never opened. Once I rode the Roller Skater I headed back around the park once more to see if the SLC was opened. It was still testing, but sadly it was still closed. I toyed with riding Cheeta once more, and probably should have, but decided to call it a day and head the rest of the way to Florida.

The way out of the park took me straight to I75 south. I stopped for some more gas and then eventually made my way to Apopka where my sister lived around 8 PM. I went in to Wild Adventures not expecting much, wanting to at least ride the coasters. I was able to ride 4 of 7. Honestly, I was surprised at how much I liked the park, and looked forward to returning to ride more rides and check out the animal exhibits.