As I’d taken two weeks off in September of 2017 to visit Japan I really hadn’t planned a lot of domestic travel in 2017. I knew getting back from Japan would lead into a busy time. The following two weeks after my return to the US were busy with local events including a work trip at Kure Beach. Then there was a pre-planned trip with friends in October to Atlanta. I took most of November easy, but I knew that December would be another busy month to cap off the end of the year. I had tickets to see Janet Jackson in Columbia, SC and Atlanta, GA which were rescheduled dates from her Unbreakable World Tour, renamed the State of the World Tour, at the beginning of December. These were the last two dates of that leg of the tour. Needless to say, I was busy.

Earlier in the year I had the opportunity to request 2 days of vacation in between Christmas and the New Years holidays at work, which meant I would have 10 days off in a row. I didn’t plan out anything, but in the back of my mind I had considered spending part of the time in the Orlando area as my sister and her family have been there for 6 years and I’d only made the trip down once. Eventually I made the commitment and let my sister know I’d be down for the latter half of my time off. Time slowly approached and soon it was Friday.

Some more back story, during my trip to Japan there was a position at an office very close to my house that I’d hoped to transfer to before the year’s end. I knew the position would be available, but unfortunately due the incompetence of some human resource employees I missed my chance at an interviewee even though the local management team tried to set up a phone interview while I was abroad. However, in a surprising turn of events, 2 more unexpected positions became available before year’s end. I was able to secure an interview this time, but the wait in between interviewing and finding out whether I was selected for a position was nearly a month an a half. I was in a bad mood during most of that time, but 3 days before the start of my vacation I received confirmation that I would be transferring, starting effective the first of the year.

END_OF_DOCUMENT_TOKEN_TO_BE_REPLACED

Isaac and I had slept later than we’d planned and after discussing what to do we decide to go to Tobu Zoo together so that Isaac and I could check out the Zoo, and I could get the credits he got a couple of days prior. I didn’t want him to feel like he had to go back with me, especially with the train ride and cost, but he was happy to go back to the zoo, which he’d not spent any time at on his first visit. Also, he liked the coasters so much, he wanted to ride more, and wanted to see what I thought of them. The only downside is that Tobu Zoo is really rural to the north, about 2 hours from Yokohama, which is already on the south side of Tokyo.

Having said all of that it was definitely worth the trip out to Miyashiro for the zoo.  Getting there on the train takes you to a newly remodeled station on the Tobu line, out in the Tokyo suburbs and farmland. The quaint little town of Miyashiro didn’t seem to see much in the way of Caucasian or generally non-Asians from what we saw on our visit (Isaac’s second). We walked from the station to Tobu Zoo, passing through the town and by Nippon Institute of Technology, a 100 year old college in Japan. We walked to the zoo in the beautiful weather (another reason the visit to Tobu Zoo ended up being today).  I’m not sure what the park is like on the weekends or when school is out, but during midweek with school in the park was absolutely dead. We paid our entrance fee and for a ride all day pass and headed in hopes that all of the coasters would be open, and they were.

You can walk for quite a ways in Tobu without seeing anyone, employee or patron alike.  Our first stop was a walkway to the left of the lake to Regina, the Intamin built wooden coaster built over a small lake, as it was further out from the rest of the rides. I’d heard good things about this ride when people started going to Japan to ride coasters, many years go, but in recent years reviews hadn’t been so good. Isaac wasn’t able to ride in the back on his initial visit and wasn’t so impressed with his front row rides. But today the crew didn’t seem to mind where we sat, so the back it was.

END_OF_DOCUMENT_TOKEN_TO_BE_REPLACED

I’d lived near Tiger World for quite a while, and was familiar with it for far long. Finally I decided to take a friend and go. We had a nice visit, and I just wish I hadn’t waited so long. 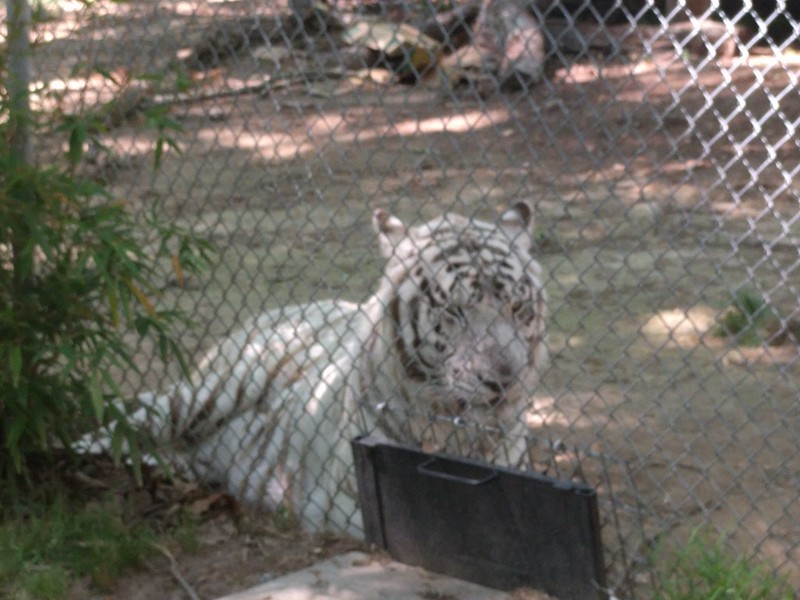 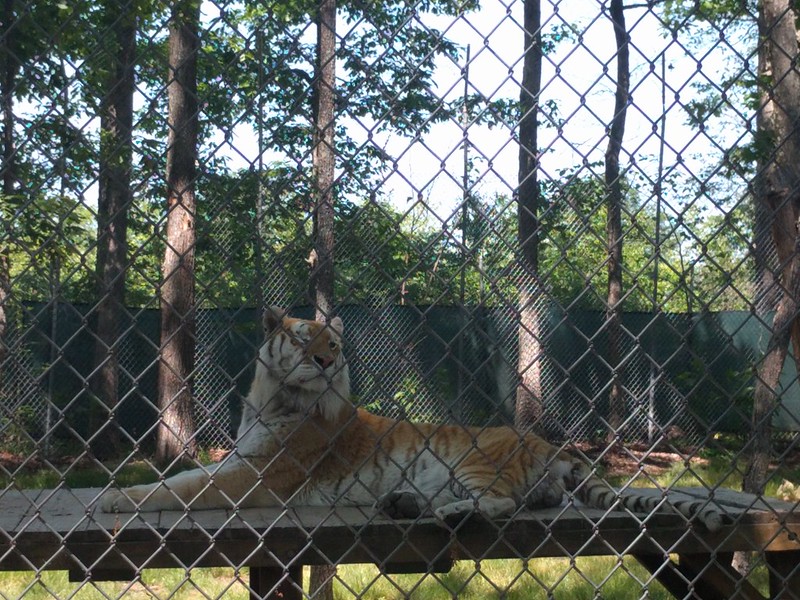 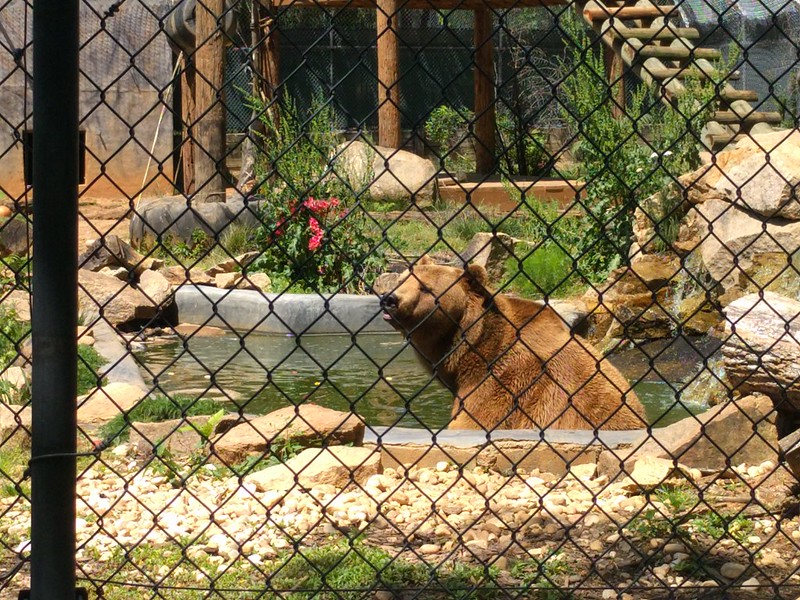 END_OF_DOCUMENT_TOKEN_TO_BE_REPLACED

I loved Busch Gardens Williamsburg. Since my first visit I’d been back a few times, and I love the theming, the rides, the food, and the overall atmosphere. I really liked Sea World San Antonio as well for having the same type of atmosphere. And so I was really excited to finally visit Busch Gardens Tampa. On Wednesday Morning my parents drove me to Rob’s apartment complex in Orlando and we headed out from there, getting to the park sometime in the early afternoon.

Once we got thru the gate I was struck by how similar yet different this was from the park in Williamsburg. It had the familiar semi-claustrophobic, but really awesome entrance. And it was very nicely done. The park wasn’t very busy, which was great. I definitely wanted to get back there sooner rather than later already. Our first ‘attraction’ was a bird sanctuary. We walked thru and looked at the themed topiaries around the park, and eventually came to the first credit, Air Grover.

I’m not going to to a rundown for this, it was your basic Zierer kiddy coaster that I’d ridden plenty of times. It was a cute theme, and it was a credit so ‘nuff said. We walked around the park even more trying to decide what to do. I definitely wanted to ride the new drop tower, Falcon’s Fury before I chickened out. But our first major coaster ended up being Sheikra.

END_OF_DOCUMENT_TOKEN_TO_BE_REPLACED

In the thirty years I’d been alive, I’d never ‘really’ been to Disney World. I’d been to Florida a couple of times, and even went to Downtown Disney once. I had been to Disneyland in 2005, which was my first Disney park experience. I’d tried to fit Disney World in on so many occasions, so many different ways, but finally I was talked into a 3 day weekend to at least get there and try it out.

On Saturday morning January 15, 2011 I flew out of Charlotte with a layover in Atlanta, where I met up with a former co-worker who was going to Disney with her family as well. Then around 11:00 AM, my plane touched down in Orlando. Matt, who’d made all of the plans and reservations, was already there and on his way to Animal Kingdom to meet up with Bill & Jill. Since he had our packet of information, I had to wait in a long line just to get the ticket to ride the free Magical Express bus. I was hot and sweaty. Yeah, I wasn’t in the best of moods, but, hey! I was going to Disney World!

Once I got my ticket the wait for a bus wasn’t very long at all, and the bus was nice and air-conditioned. I didn’t have much in the way of luggage, just 2 small overnight bags. I arrived at the Coronado Springs Resort in the early afternoon to find a very pleasant resort that I was almost sad I wouldn’t get to enjoy as most of my time would be spent at the parks. The resort had a beautiful lake situated in the middle of it. I rushed into the gift shop to buy necessities (a tooth brush, mouth wash, Speed Stick, and of course, Mouse Ears!) and headed to the Concierge desk to pick up my room key/ticket and information.