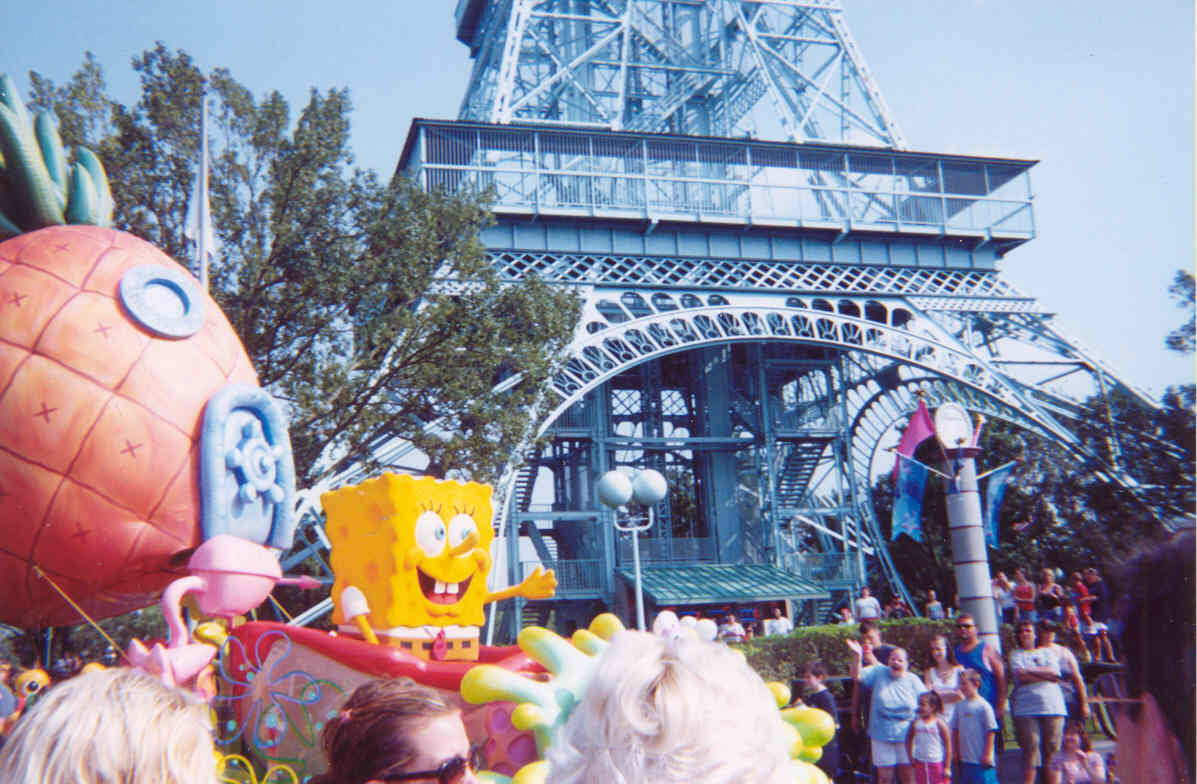 My original goal for the summer of 2004 was to visit at least one theme park every month from May through October. But because of car trouble and an overall lack of funding I had to skip the Beast Buzz event in June, and my planned trip in July to Cedar Point was pushed back to August in order to spend that day with friends that would be visiting the area that same week. I also ended up skipping a visit to Dollywood in late July. Because of so many setbacks, I was determined to get to Kings Island in August. I hadn’t been to the park since my 8th grade field trip in 1994, so it had been just over a decade since my first and only trip to the park. Since I ended up having a 4 day stretch off of work I decided to use that to my advantage.

I had thought of going to Coney Island Park in Cincinnati the evening before, but after a grueling drive to OH all I wanted to do was set up my tent and sleep after I arrived. Driving by the park right before it closed, I was able to watch the fireworks, get a look at Son of Beast, and watch Drop Zone cycle a few times. I had discussed meeting up with Danny from CoasterBuzz and, though we were going to meet that evening, I had to get some sleep. So I checked in at the Kings Island Campground, got my lot, set up my tent, and went to sleep after my 6 plus hour trip to Kings Mills, OH.

The next morning I couldn’t sleep past 6 AM. I went to the bathhouse and took a shower, popped some ginger pills and aspirin for the pain and nausea that I didn’t want to have later, and since I was up I figured I’d go over to the McDonalds around the corner and have breakfast. After that I went back to my tent to lie down & make a few phone calls before I walked over to the park. I could have waited for the shuttles to start running but I figured I could use a morning walk to get me going.
END_OF_DOCUMENT_TOKEN_TO_BE_REPLACED

I’d known for months that I would be visiting Carowinds in May as I would be in NC for the weekend of the 14 so I made plans with my good friend (and then roommate) Jon to go again as we had the year before. It had been announced that the park would be adding the world’s first Star Trek themed ride, which would be opening in May and as a Star Trek fan, I was excited. That I had ridden a near clone of the ride already and had enjoyed it made me even more excited to ride.The original plan called for Jon to head out to NC and spend the week with friends, and he and his friends would meet up with me on Friday at the park, after which he’d head back to Salisbury with me for the weekend.

As the beginning of May rolled around, though, Jon realized that he lacked the funding to travel to NC for a  day, much less a week, so I was without a riding partner as all my other friends weren’t going to be able to make it till Friday evening. That same week Andy Wong messaged me on CoasterBuzz to let me know that he too would be at Carowinds on the 14th, and wanted to know if I wanted to meet up to meet in person and hang out, and of course I said yes. We spent the 2 weeks before making plans over instant messenger and phone. Finally it was the day before the trip. I called and made final plans to meet Andy at the front gate. We were to meet at the park, but if one of us got there signifigantly early, that person was to get in line for BORG, and we’d meet up after we both rode.

That morning at 4 AM I woke up, got ready, went in to town to gas up, and at 5 AN headed out from the tiny town in WV where I reluctantly called home for the North Carolina sun. I had planned to stop around 6 AM for breakfast in WV, but the place I had wanted to get breakfast at hadn’t opened yet. I put off breakfast for a while, and decided to head for the interstate.