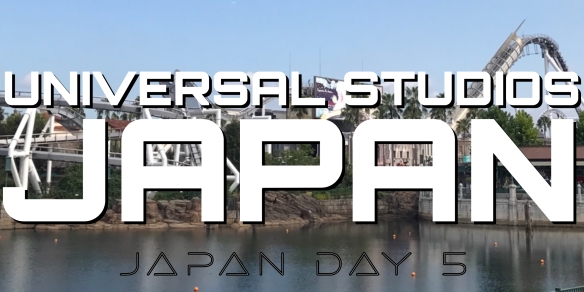 Universal Studios Japan is another busy park where you must arrive before opening to get an Express Pass, otherwise it sells out and the lines can be outrageous. Since you can’t get the Pass online on any English website based in the US, it has to be purchased onsite. So after going to sleep early, we got up early and headed to Osaka once we checked out of Hotel Anteroom (I had accidentally booked one less night than we needed, but we decided just to Hotwire a room in Osaka). Osaka is a very convenient hour or so train ride from Kyoto.

We arrived a good hour before park opening. I’m actually fairly proud of the fact we were able to do this for all of the parks we needed to. After purchasing our tickets and choosing our express passes, we got in the massive line to go in. Thankfully the older lady selling us tickets was very accommodating with our lack of Japanese and helped us pick the correct Express Passes. Then just before 8:30, Woody Woodpecker and his girlfriend came out to greet everyone.  Once the gates opened, everyone rushed into the park. Universal is another Japanese park with a covered ‘main street’. My first impression of the park and CityWalk were that they were definitely modeled after both of the US Universal parks, and that’s great.

At this park, you choose which type of Express Passes you want. You get 4 A level rides at timed slots, then get B level rides (You choose between 2 rides for the 3 slots) you can use at any time. This is a busy park with long lines, so we wanted to maximize our Express Passes and play it smart. Hollywood Dream, the park’s mini B&M Hyper, is running one of its 4 trains backwards and calling it Backdrop. We decided to hit it up first thing since it’s only one of the trains, and they were running 3 forward. The wait was between 20-30 minutes, not bad considering you were waiting for only one of the four trains.