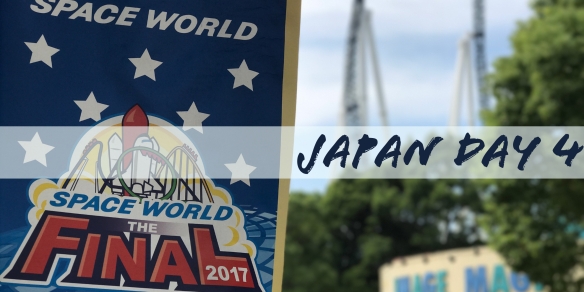 Isaac & I woke up super early again on Tuesday morning, but this time we skipped breakfast at the hotel as they didn’t start serving for another hour or 2 and headed to Kyoto Station to catch the Shinkansen to Space World. I realized I’d forgot my phone on the way to the station, but once we had our tickets for the train we realized we had plenty of time to run back for it and eat a bite at a breakfast place across from Kyoto Station. Breakfast at Topscafe was interesting. You ordered from a machine then hand in your ticket. It was busy, cramped, but clean and the food was very good. Once we finished eating we headed to our platform to catch the train.

We arrived at Space World after a 3-hour Shinkansen ride and a couple of transfers onto the local train line. This area was definitely different from Tokyo & Kyoto. Not one of the major Japanese tourist areas, much further south, even hotter, more humid, and in a more industrial setting. We passed right by the park and into Space World Station. Many people were heading to Space World since it was closing, so we had to stand in line for a bit to get tickets. Lines would be the order of the day.

Thankfully, all of the coasters opened. Unfortunately, all but 3 of them had long, slow lines, with a couple having insane wait times, as they seemed to dispatch trains every 10-15 minutes, just as I’d read online. Since we were prepared it was only slightly annoying, but expected. After getting into the park we headed to Zaturn first, as a launched Intamin was more prone to breaking down. Walking thru the park, it looked very different than the photos I’d seen from even just a couple of years ago. It was clean, but it was definitely not being fully kept up. We headed around the corner and got in line for the coaster. The line wasn’t long, but launches were slow. Once we were in the station, there was an area where you had to lock up all of your personal items, then head into the main queue area. Eventually, though, we were on in the back row of the train.