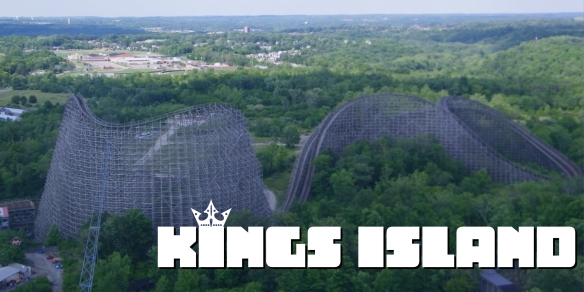 My first visit to Kings Island was in 1994 on a disastrous school trip that caused me to miss riding both The Beast and Vortex. My 2nd visit was a decade later. While it was much better, I walked away that evening in pain because I’d walked and stood so much.  I’d tried to get back to Kings Island a couple of times, once on a trip in which I ended up in the hospital in Columbus due to kidney stones and a bruised kidney (thanks Magnum).  Since I was going to Holiwood Nights I figured this would be the closest I’d be to the park for a while, so why not?

Sunday morning I woke up after everyone else and got ready. Since we all drove separately I left 2nd and was about 30 minutes behind Rob. Thankfully Rob called and texted me and the others about parts of I71 North being closed off for construction. I was able to tell him the detour and a couple of hours later we met up at a park and ride near the park, since Rob didn’t have a Platinum Pass and I did, so that no one had to pay for parking.

The parking lot was quite full and people were pouring in by the minute. I asked the gate attendant where season pass parking was and she told me to go left and I would see it.  Eventually I saw the preferred parking lot, so I pulled in and asked if my pass covered that and the gentleman at the gate let me in. We were just a few steps from the entrance.  I love Platinum Passes, especially the last 2 weeks with Kings Dominion and Kings Island letting me park so close.