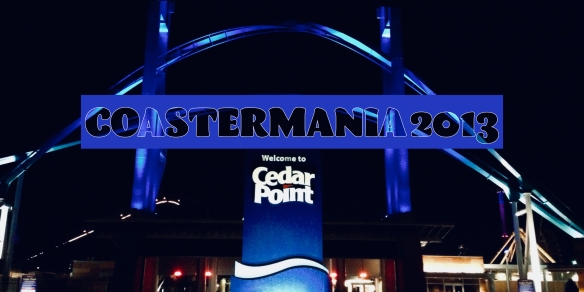 I’d never been to Coastermania. Every year I thought about going but it often conflicts with Holiwood Nights, which I usually went to every other year or so, and then in the ‘off’ years for that, I’d usually been busy around that time doing other things. In 2013 I planned for Coastermania though, because I really like Cedar Point, and I wanted to ride Gatekeeper.

Because of things that couldn’t be helped I left work 2 hours later than I’d wanted to on Thursday evening, leaving the Charlotte area around 6 PM. The drive to Huron, where I had a room, was long. Really long. And it just felt like it was never ending. Getting stuck in roadwork and traffic at different times didn’t help at all. Eventually, though, I made my way up to northern Ohio and got to the motel around 2:30 in the morning. I usually use Hotwire to reserve a room and always get a decent deal, but rooms for Sandusky were quite a bit higher than I wanted to pay for, especially for the star ratings available. I ended up booking $49 at Motel 6 only because I’d heard it was clean and close. It was. In fact, it seems Motel 6 was renovating its rooms and going for a more post-modern, minimalistic approach. Wood floor laminate, white and orange walls, IKEA looking furniture, and it was all very clean.

Having only been able to sleep for about 4 hours before waking up and checking out, I sleepily stopping by McDonald’s for breakfast on the way to the park. The forecast kept calling for sunny skies and 80 degree weather. Well we were in deep fog and it was maybe in the 50s.