The last time I was at Myrtle Beach prior to this trip was in September of 2006 for the final operating day of the classic Myrtle Beach Pavilion. A sad day, and a large part of the reason I hadn’t been back since. However, 2008was the inaugural season for Hard Rock Park, a new theme park which I’d been following the planning and construction of for quite a while. I had wanted to go in it’s first year of operation but never made it down to Myrtle Beach in 2008. Imagine my surprise when, after just a few months into its first season, the park abruptly closed and declared bankruptcy.

This could have been the end of the park, but thankfully a new owner stepped in for the 2009 season, even if they had to change the name and much of the theming as well as rip out lots of other theming. I didn’t want to miss my 2nd chance at visiting the park.  Unfortunately the second season would be the last season for the park which has since had all of it’s rides moved to other parks and the site has since been demolished.

I decided to take off on Friday just before Memorial Day Weekend and offered to take my grandmother down to her house in Salisbury NC since I would be staying there overnight on Thursday. The trip to North Carolina was quick and uneventful and on Friday morning I was up early and ready to head further south. The ride to Myrtle Beach was pleasant. I did get slightly turned around a couple of times but still made very good time even with stopping for gas and a few pictures at the infamous South of the Border tourist trap.

END_OF_DOCUMENT_TOKEN_TO_BE_REPLACED

Waking up on Thursday morning I got my things together, ran some errands, and headed south. This was my only major trip planned for the year, and it was a mixture of excitement and sadness because this would be the last time I would visit the legendary Myrtle Beach Pavilion. The drive from my home in southern West Virginia to Myrtle Beach was around 7 hours. Thankfully Janet Jackson had released her then latest album that week, so I planned to give it a full listen on my way south. The weather was rather dreary, but I knew that reports were for sun in Myrtle Beach thru the weekend.

About 90 minutes in to the ride I stopped in Wythville, VA since gas was only $2.08 to fill up and get some food. I wouldn’t stop again until North Carolina to get some directions, and then South Carolina for gas. Just outside of Myrtle Beach, on US 501, something in the other lane caught my eye. The Wacky Worm station and train from the now closed Grand Prix was on the back of a truck being transported elsewhere. I had seen pictures of the track packed up. I guess someone bought it. I had left around 10 AM and expected to arrive in Myrtle Beach around 5 PM and surely enough, at about 5:30 I was pulling in to the parking lot of the Hotel. I had spent the last 3 hours looking forward to arriving and relaxing in the room for a bit. That, however, would not be the case once I arrived.

Once I arrived it seemed as though everyone was having some type of problem with the staff. Sea Crest is a very nice ocean front property where we have stayed for at least 10 years. My parents would be arriving there the day I was leaving, and my mother had made my reservations as well since we were going at almost the same time. Unfortunately, there was an issue with the reservation.

END_OF_DOCUMENT_TOKEN_TO_BE_REPLACED 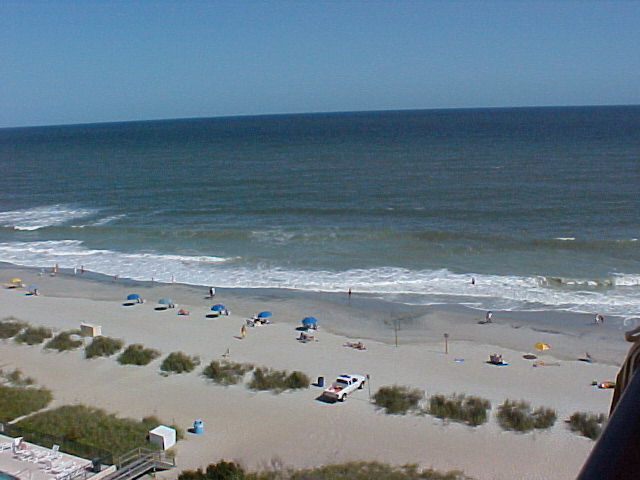 For many years Myrtle Beach was my favorite place to visit for vacation. It had everything I want to do; roller coasters, swimming, restaurants, night life, you name it. As a kid my family went every year. My most recent visit had been in 2002. As it was late in the season, it was much different visit than I was used to but I had a lot of fun. I decided to take some time from my new job and head to the beach with my family. Because of a previous engagement, we would be leaving for Salisbury, North Carolina on Friday, September 17 and staying the nite.

Because of Hurricanes Charlie, Francis, Ivan, Bonnie, and Janeen, I was very afraid we were going to be rained out as it started raining late Thursday evening at home, and continued thru our trip to NC. I was happy, though, to see beautiful blue skies when I woke up Saturday morning. We left Salisbury around 4:30 pm and headed south. It was about a 4 hour trip including our stop at Pizza Hut in South Carolina for dinner, but we made it to the Holiday Inn (now Sea Crest) Hotel we were staying at around 9:00 pm that evening.

After checking in and taking our luggage up to the suite, I promptly changed clothes and headed out for a nite on the town. I hadn’t really been out since moving back home, so I was happy to finally be getting dressed up for a reason. I cruised around downtown for a bit which, though it was the off season, was still fairly active as it was the weekend. I didn’t want to arrive at the club too early, so I cruised some more around Myrtle Beach. Then at around 11:30 pm I headed for Club Kryptonite, the hot new club at Broadway at the Beach. I forgot my flyer to get me in for two bucks, so I ended up paying $10. It was “Coyote Ugly Night” so there were loads of girls on boxes and up on the bar dancing and pouring drinks. The DJ was great, loads of good music, and the crowd fun. Getting back to the room, I took a shower and went to sleep.