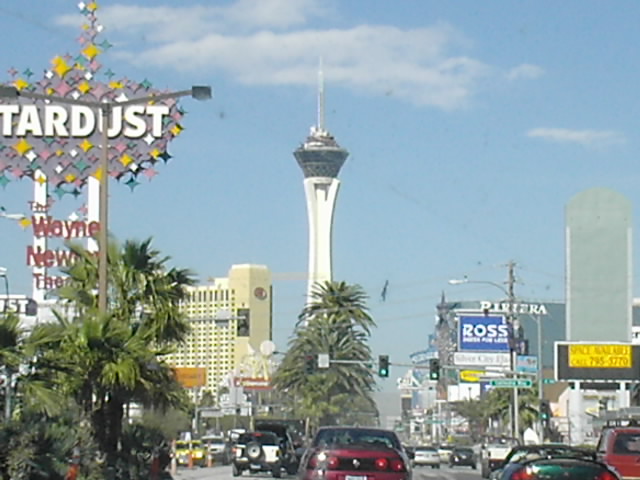 On Thursday we had plans to do several different attractions around Las Vegas. We met up with the gang, which were now joined by Tina and Bill, who had arrived this morning from Los Angeles, as well as Rob, our Las Vegas native, for an all day pass on Speed. We only took 2 spins, which was still cheaper than one ride on Manhattan Express.

Speed The Ride-You have to travel thru the Nascar Café to get there, but once you’re in the station very little NASCAR is actually seen. The launch into the over banked left hand turn was great. Then it goes into a loop, thru more LIMs, another turn to the left, and up a large spike. The kickback at the highest point was great. Then you do it all again with a deceleration at the LIMs instead of a kicker launch. I really liked Speed, and after it was all done, we rode it again. This time I sat with Jeff in the front seat. Even with the OTSRs, this was nothing like Joker’s Jinx with ‘em. This was a better start to coasting in Vegas!

Apparently we were a few drinks behind everyone else with those 99¢ margaritas, but Jamaal and I decided to play it sober for now. The gang re-grouped and headed down the street towards the Adventuredome indoor theme park at Circus Circus. Circus Circus is an older property, and it shows. I was going to book two nights for us there, but I’m glad I didn’t. Actually, the inside didn’t look as bad, and I hear their steak restaurant is one of the best in vegas. But we were there for one reason and one reason only: Canyon Blaster.

We made our way through the casino and around to Adventuredome. The first ride we saw was their newly installed Chance Slingshot Tower. I had rode one in Myrtle Beach and loved it, but I was only willing to part with enough cash for the main coaster here. We walked around Adventuredome, which is very pink. Adventuredome is an indoor amusement park with a huge faux mountain in the middle and several rides, mostly Chance Rides, scattered about. I would like to spent a few hours there at some point in the future. Eventually we all got to a ticket booth and went to the coaster station. 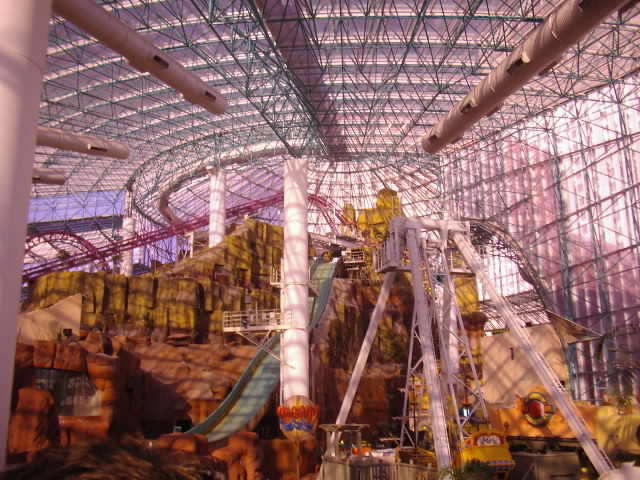 Canyon Blaster–This was one of the smoother Arrow loopers I’d ever ridden. I think that being indoors helps, not being subject to the elements, with less of a chance of rust or fading paint, all of which could affect the ride. Everything in the Adventuredome was very clean and well kept. This was the first time I’d been on an Arrow coaster with their later rolling stock. It was very comfy, even if they didn’t look very Arrow-esq. The ride wasn’t very different from any other Arrow loops-crew. You have a first drop into loops and a turn into corkscrews, then a helix before you’re done.

The other kiddie credit was not open and I wasn’t in the mood for any flat rides so we wandered around while some of the crew played DDR, and eventually left. Some of them still had to get that Manhattan Express credit but since Jamaal, Jeff and Myself had it we went to do the other geeky thing I’m into-Star Trek.

For years I’d wanted to go to Vegas just to visit Star Trek: The Experience  I mean, this was Star Trek Mecca! At the time, while I still enjoyed Trek, I wasn’t quite as huge a fan. This was something I wasn’t going to leave Vegas without doing. We made our way to the Hilton, passed thru the ‘futuristic’ themed casino (which just happens to have one of Travel Channel’s “World’s Best Bathrooms”, and yes we visited), and then I saw it.

Voyager, the Enterprise, a Klingon Bird of Prey. I was super excited. So we bought our all day passes to both ‘Klingon Encounter’ & ‘BORG Invasion 4D’ and headed thru the ‘History of the Future’ museum. I filmed the whole thing. I even got to talk very briefly with a severely tall Klingon. Eventually, we made it to the queue of ‘Klingon Encounters’, the original attraction. The wait wasn’t very long. 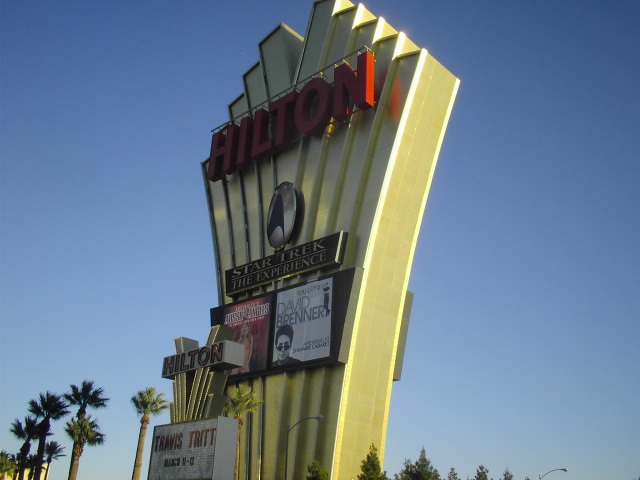 Klingon Encounter-I didn’t know the storyline until I got there. You’re met by an attraction host and the intro has you lined up ready to head into the attraction. But something goes wrong and you’re transported onto the Enterprise D. The transporter effect was brilliant. You’re rushed to the bridge of the Enterprise for a briefing, where you find out that someone in the group is an ancestor of someone important in the future, and a rogue Klingon has went back in time to change the future. The next major scene is in a turbo lift where, again, they use special effects that were very well done. Finally you’re taken to a shuttle craft where the simulator part of the attraction begins. I’m not a huge motion sim fan, but this was the best one I’d been on. As you exit, there was a newscast playing on the screens that gave an ‘update’ about a UFO landing in Vegas.

You exit thru retail shops and Quark’s bar on the Promenade. Then it was back around to do BORG Invasion. Back thru the museum and into the other queue. This time the wait was even less. We were all eventually led into the first room for our pre-show and briefing.

BORG Invasion 4D-This one was even better. The pre-show features the Doctor from Voyager telling you why you are there. This time you are on a space station. Then something happens, and the station is under attack from the BORG. As you’re moved through the space station, the BORG start to attack the ‘staff’ of the space station, assimilating them. This was more like a walk through haunted house style of attraction. At the end of it all ended up in a large theater that used practical effects to make it feel as if you’re in a different kind of vessel, with 3D and practical effects putting you in the action. Because I used to wear glasses, the 3D glasses on most attractions didn’t work well for me. These worked like a charm. I really enjoyed it. Afterwards we were back on the Promenade, where I picked up some stuff. Then we decided to have a drink at Quark’s Bar. I had a Warp Core Breach. It was quite large and Jeff had to help me finish it after he drank his Mind Meld. We called the group and met up eventually at the Bellagio after riding the Monorail from the Hilton to Bally’s. They had been watching the fountains for quite some time now. We stayed and watched a full run of the fountains as well before heading off to Fremont St.

The Fremont St. Experience was the world’s largest television. It’s actually a large canopy over Fremont St. that stretches from one end to the other, over 5 football fields long. Viva Vision is the series of shows between 6 and 9 minutes long that are shown at the top of every hour. Once a busy street in Downtown Las Vegas, most of the area is closed to vehicles now and is a shopping, eating, and gambling venue. I found it to be very clean and entertaining, with live music and a fun atmosphere.

At the top of the hour, however, Fremont St. gets very different. The things that Vegas is most known for, the Neon lights on the casinos, all go off at once, as the large overhead screen comes on. We were about to witness ‘The Drop’, a psychedelic underwater techno music show. Jamaal took video of the 8 minute show. There are a few different shows.

After that Jamaal and I headed to the Stratosphere Tower, as did Dawn who was dropping off Kristin and Jeff. We all eventually met up with Tina and Bill at the top. The nite could have been a lot different… 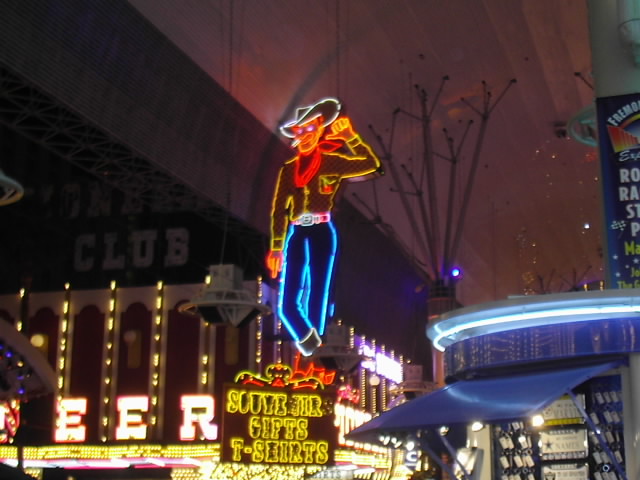 Once we get to the top we find that Insanity, the new ride at the top of the tower, was closed. The person selling tickets had told us that the ride was open and operating. This was, after all, opening nite. Tina and Bill almost made it on before it closed down. What do you do when you have a building over a 1000 feet tall standing in the desert where the wind is always blowing and you’re looking for a new thrill ride? Build Insanity, of course, which can’t operate in winds over 25 mph. Insanity never ran again that nite, and we stayed till closing. Oh well, at least it wasn’t a total loss. There were three other rides at the top of the tower.

So instead of riding Insanity we boarded their other new ride, a see-saw with an attitude: Xscream.

Xscream-Scariest. Flat-ride. Ever. Hands down! We got on close to the back. I didn’t have my glasses on, but could still see well enough. The platform you stand on lowers, and you’re sitting there being held in by a lap bar dangling 900 feet in the air. Did I ever mention I’m afraid of heights? Whew. Very scary. They run a few programs on the ride, all equally as bad. I swore I’d never ride again, but I ended up riding 2 more times after this (screaming like a girl the whole time) and even once in the front row.

After Xscream we headed farther up the tower for another coaster credit.

High Roller–This had the worst ops I’d ever seen in my life. They tried to fill the train and since the top of the tower wasn’t busy, we waited. And waited. And waited. Then they realize that the guy sitting in the front seat of the coaster was too big to ride the coaster. So they all look at him, then they go inside to discuss it. For about five minutes. Then they come back and tell him he can’t ride. Then they wait till a few more people arrive. Quite a while later. I know we sat in that car a good twenty minutes before the ops finally decided to send the train around. It goes around the circuit twice, but one would have been enough. Not very fun, actually rather boring. And it was rough.

Jeff and Kristin finally made it to the top and we all rode Big Shot.

Big Shot-Even sans glasses (darn me for forgetting my strap), I could see a lot of the city. Big Shot was more fun than scary, especially now that I realize that I like S&S towers much better than Intamin as you’re not held at the top before dropping. A couple good bounces, and air at the top made this a really fun ride.

More rides on both Xscream and Big Shot followed. We had a last ride on Big Shot before the tower closed for the evening. Then we all parted ways for the nite. The plan was for Jamaal and I to go to ‘Ra’, a club at the Luxor but it was too late and I was too tired. So I went back to the room to sleep as Jamaal ventured out to wander around and shop. We got up fairly early the next morning to leave. 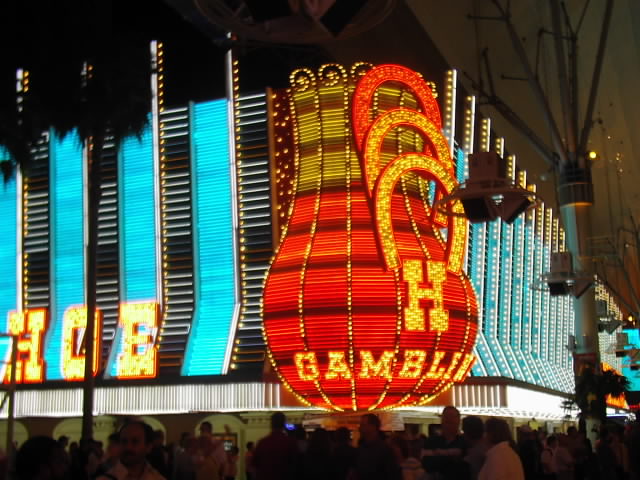