Okay, so this one doesn’t have much Canada in it, but thats where I started out for the day. Friday morning I woke up, packed up, checked out, and headed to the Rainbow Bridge to cross the border back into the US for good on this trip. Crossing the border into the US was always quicker than crossing over in to Canada. I was on my way pretty quick, with a couple of quick stops for pictures, and off through Buffalo and on to Darien Lake for my first visit. The day was cold and rainy, which was fine as I only wanted to spend a short amount of time at SFDL to ride the coasters. This being the first year back fully under the Six Flags Umbrella, my Diamond Elite Membership got me in, with free parking, and lots of other perks I ended up not using or needing on this visit.

The drive to SFDL was quick and easy. I stopped at yet another (the last of the trip) Tim Hortons for breakfast, and before long, I was pulling in, showing my pass, and parking near the gate at Darien Lake. Apparently there was some band competition there, but the park was still very dead. And as I’d never been before, that made me very happy. I had seen Superman running as I drove by the park to the parking lot, so I knew it was up and running, and it would be a milestone coaster for me. So I headed in with my pass and made my way over to the left, walking to my first coaster of the day.

Ride of Steel (400)-FINALLY! I finally hit 400 credits. I’ve ridden the sister clone at Six Flags America, which was my 2nd hyper coaster ever. I’ve loved it for many years. I was glad to see that this ride had updated their trains to the newer restraints. For my first ride I sat in the last row. Before long we were speeding on our way up the lift hill. Getting pulled over the top, the first drop I was very used to from it’s sister in MD. The rest of the ride, though, was very mediocre. It’s cold, early in the season (opening day), and early in the morning. So even though there was airtime, the ride had not warmed up. It was good, mind you. The turn into the first hill, up and over had major floater air. The last 3 hills gave airtime as well. But it wasn’t what this ride is capable of, and that’s okay. 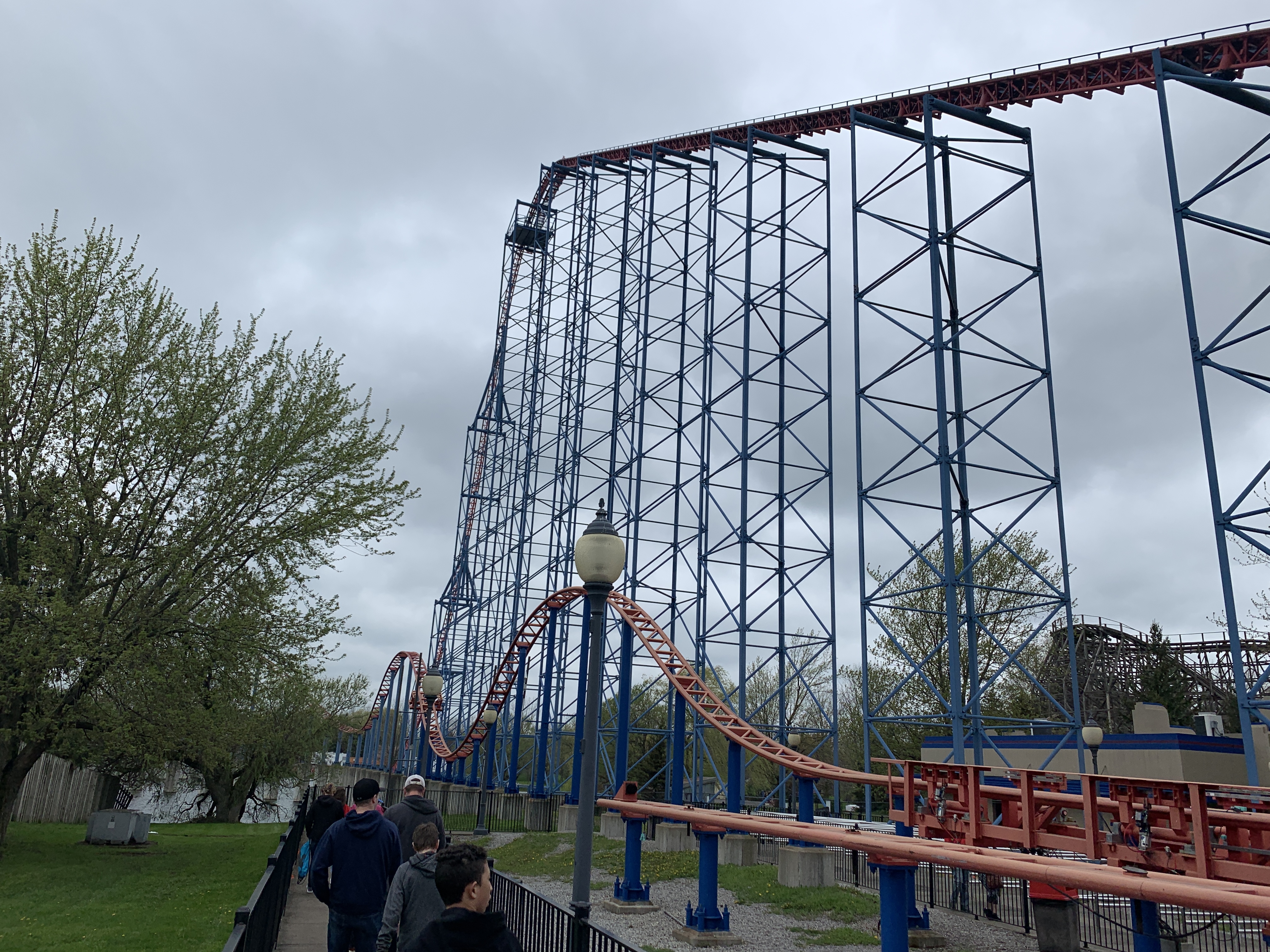 Walking over to Ride of Steel, I noticed that Predator wasn’t open, which was disappointing. The layout looks really fun. But they were retracking the lower turn on the far end. That was a bummer, but I realized that SFDL is only about 2 hours from Waldameer, so the next time I’m in the area, I’ll pop up for that.

I walked across the fairly empty park, heading to the newest coaster addition to the park. I noticed the very well done kid’s section, Rowdy Ridge. More Six Flags should take a look at this and add something similar. Tantrum was a walk on to the front row.

Tantrum (401)-While I enjoy Eurofighter coasters from Gerstlauer, they’re kind of hit and miss, especially if they have over the shoulder restraints. Tantrum had a 2 row train with only lap bars. This thing is smooth and a lot of fun. The first beyond vertical drop was good, followed by the super cool and disorienting sea-serpent like first set of maneuvers. Then you drop down, twist a bit on the straight away, and back up into an over-banked turn, then an inclined loop, and then head into the final brake run. Short, simple, but super effective, it was a great ride.

I noticed that the SLC, Serial Thriller, wasn’t operating which, while disappointing that I wouldn’t get the credit, wasn’t a huge loss. I headed through the new kid’s area and wanted to ride the Moose on the Loose ride, but it’s meant for kids, and the weight limit meant I couldn’t ride, even though there was no line and barely any kids there. The riders that were on seemed to enjoy it though. But next up I planned to ride the park’s classic Arrow looper. It just took a while to find the entrance, since the exit is on the opposite midway.

Viper (402)-For an older Arrow looper, it was actually fun. I sat in the front row of the back of the train as it had more leg room. The first drop is fun, then you speed into a series of loops of different kinds, topped off with a helix and back into the station. Surprisingly, I wasn’t ill from the positive Gs, nor did I have any headbanging, so that was a win/win for me on this classic Arrow coaster.

Darien Lake is a very charming park. I walked around the back of the lake to more rides and, even though there are some areas that could be updated, it was fairly charming. I just wish they had concrete walkways instead of asphalt because, even though I wasn’t there on a hot day, asphalt makes heat and humidity worse. The park’s newest addition, a Star Flyer, was up, but not open yet. They seemed to still be working on getting it ready. It looked nice. The next stop was a first, a Zamperla moto-coaster. 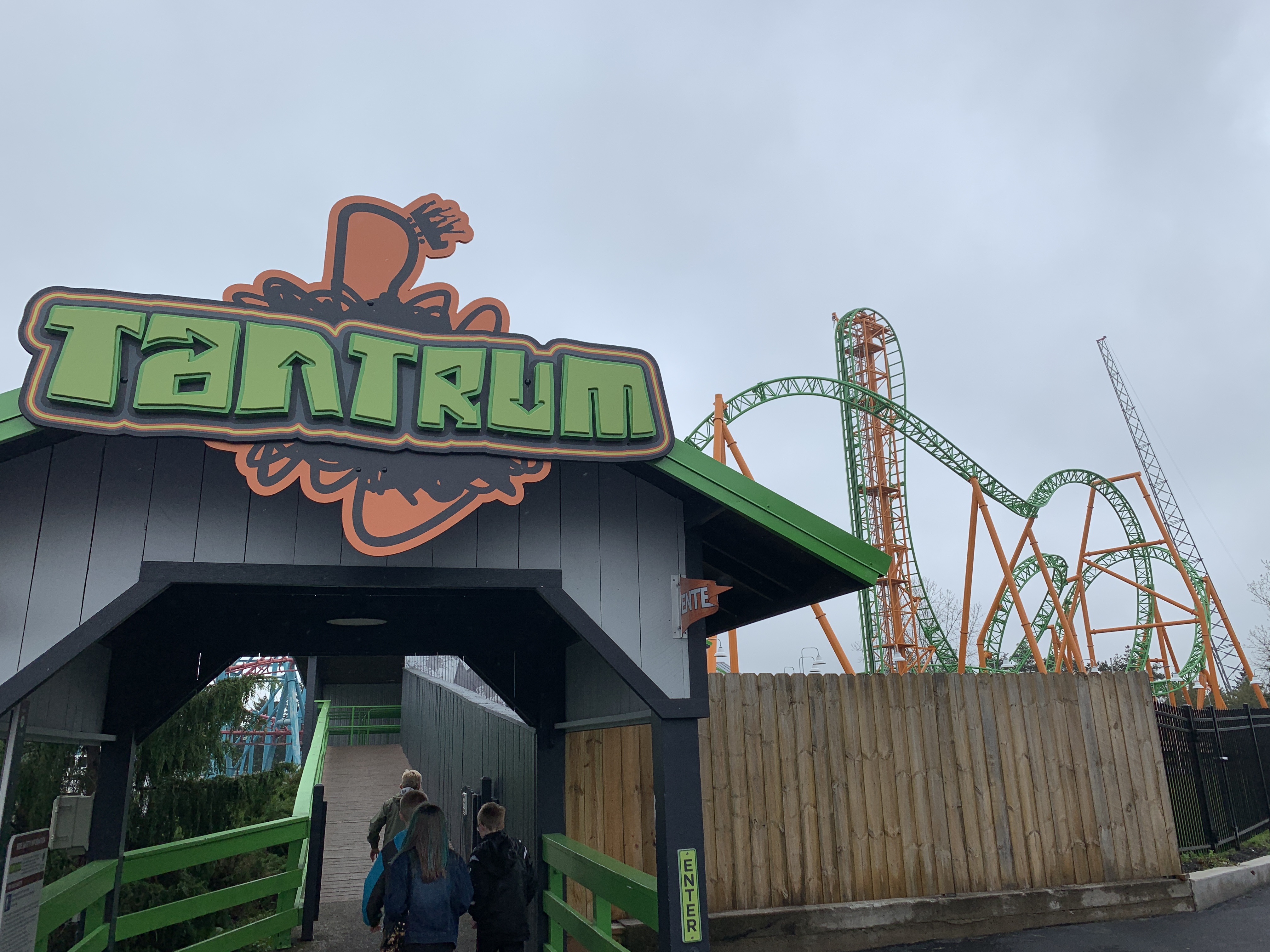 Moto Coaster (403)-I have to say, the first launch was way more powerful than I expected. I ride in the last row, and the ride was fun. You launch into an upward curving hill, then across a straight away, then another curved drop that goes into a mess of twists, turns, and helices. It was a lot of fun. I do wish they’d do a little better at keeping the area around the ride looking better, but it was a lot of fun.

I was hoping that the credits I needed that would typically make my head hurt or make me feel slightly ill, and at this point I was 1/1 (with the SLC closed). The next one up was the park’s boomerang, so I headed there to queue up next. Boomerang Coast to Coaster (404) wasn’t bad. I road in the front of the car, and there wasn’t any head banging. As I was close to RoS, I went back over for a front seat ride and, though it was a little better, the ride was still sluggish. Not bad, just sluggish. Then I walked back over for another ride on Tantrom which, again, was super fun, before heading out of the park and heading south.

So that was it. No more parks, no more coasters for the week. I left Darien Lake and headed south, through NY, PA, and then into WV, where I stayed with my very close friends, the Klien’s, for a nite in Morgantown, WV where we ate great pizza and had beer and chilled and talked. Saturday morning I headed even further south, through WV, VA, and NC. Once I arrived at home, I quickly had to shower, shave, and get dressed, as I had a wedding in SC that evening to attend.

So I really enjoyed my trip to Canada and NY. Toronto was a great city, and the exchange rate really helped out. All of the parks were a lot of fun, and I’m excited to head back north in the future to continue to explore them.