Over the last several years many people, for many different reasons, have talked up Toronto as being an amazing city to visit. I’d never been to Canada, and Canada’s Wonderland had finally started to add some better coasters to go along with their great collection of flat rides in the last few years. I’d wanted to go to Toronto in 2018 but unfortunately some issues with my old car prevented that. In the meantime, I’d gotten a new car and taken care of some finances so I decided to finally visit the country up north.

I should have planned my trip a couple of weeks later because Canada’s Wonderland & Fantasy Island, 2 of the parks I would be hitting, didn’t start daily operations until a few weeks later. I wasn’t used to this living in the south, where parks open in March. And sadly, Marineland wouldn’t be open at all during this trip. But the dates were set and, ultimately, this wasn’t a coaster-centric trip. I needed some vacation time off with some sleeping in every morning and not having to worry about stuff. On Friday, May 3 I headed north after work to Pittsburg where I’d be staying for the evening.

Then Saturday morning I woke up early and headed in to New York towards the Niagara Falls area to Martin’s. The day was gloomy but after parking I noticed that the main reason I was there was definitely up and running so, after paying to get in, I made my way the long way around to Silver Comet. Fantasy Island was quaint. It was definitely a family park with a few decent flat rides and 3 coasters. The first ride for me was the park’s signature wooden coaster, a 1999 Custom Coasters International installation. 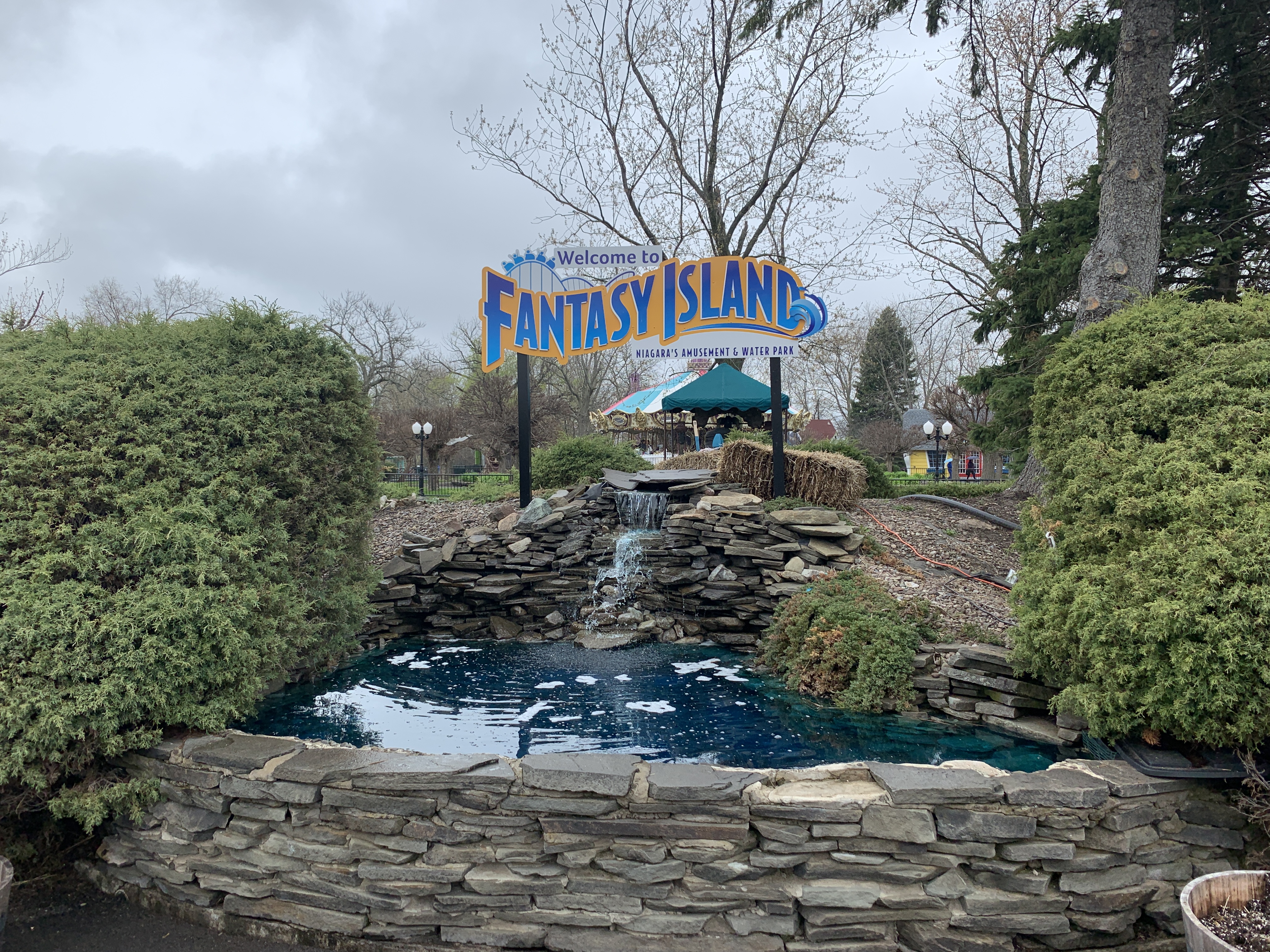 Silver Comet (384)-Surprisingly comfy, the PTC train quickly dispatched towards the lift hill. You can see the skylines for Niagara Falls and Buffalo from the top of the lift, which was neat. The first drop is really good, then you hop up into the turnaround, then down the ramp before turning and dropping back down. There are a couple of hills and 3 more turn around that follows, with some bunny hops back to the final brake run. Silver comet was running so well. This ride wasn’t ever on my radar prior, but I’m glad I stopped to ride it.

I walked towards the park’s other adult coaster, a spinning Wild Mouse, but it had yet to open so I walked towards the front of the park instead and waited for the park’s train, which was a fun diversion. After my ride I headed back to Silver Comet for a couple of more rides. It got better every time and I was able to get rides in the front, back, and nearly back. I’d heard that they had the mouse open so I headed back, but sadly it was still being prepped. This was their first opening weekend for the year, after all. At this point I decided I would head on to Toronto and hopefully avoid any evening rush hour. I was staying about 30 minutes north west of the city.

I had never crossed international borders on land before. Several friends & acquaintances gave different experiences both coaster enthusiasts and not, of crossing at Niagara and other areas in NY State. I arrived at the Rainbow Bridge, paid my toll, and headed over to Canada’s border. After handing over my passport and answering a few questions I was on my way to Toronto. The drive from Niagara to Toronto was just over 90 minutes. I stopped in Niagara Falls, ON to grab a bite to eat, and stopped once again to use a restroom before arriving at the hotel just after 5 PM. I’d Hotwired a nice place in the suburbs that was convenient and about a 30 minute ride into downtown Toronto. 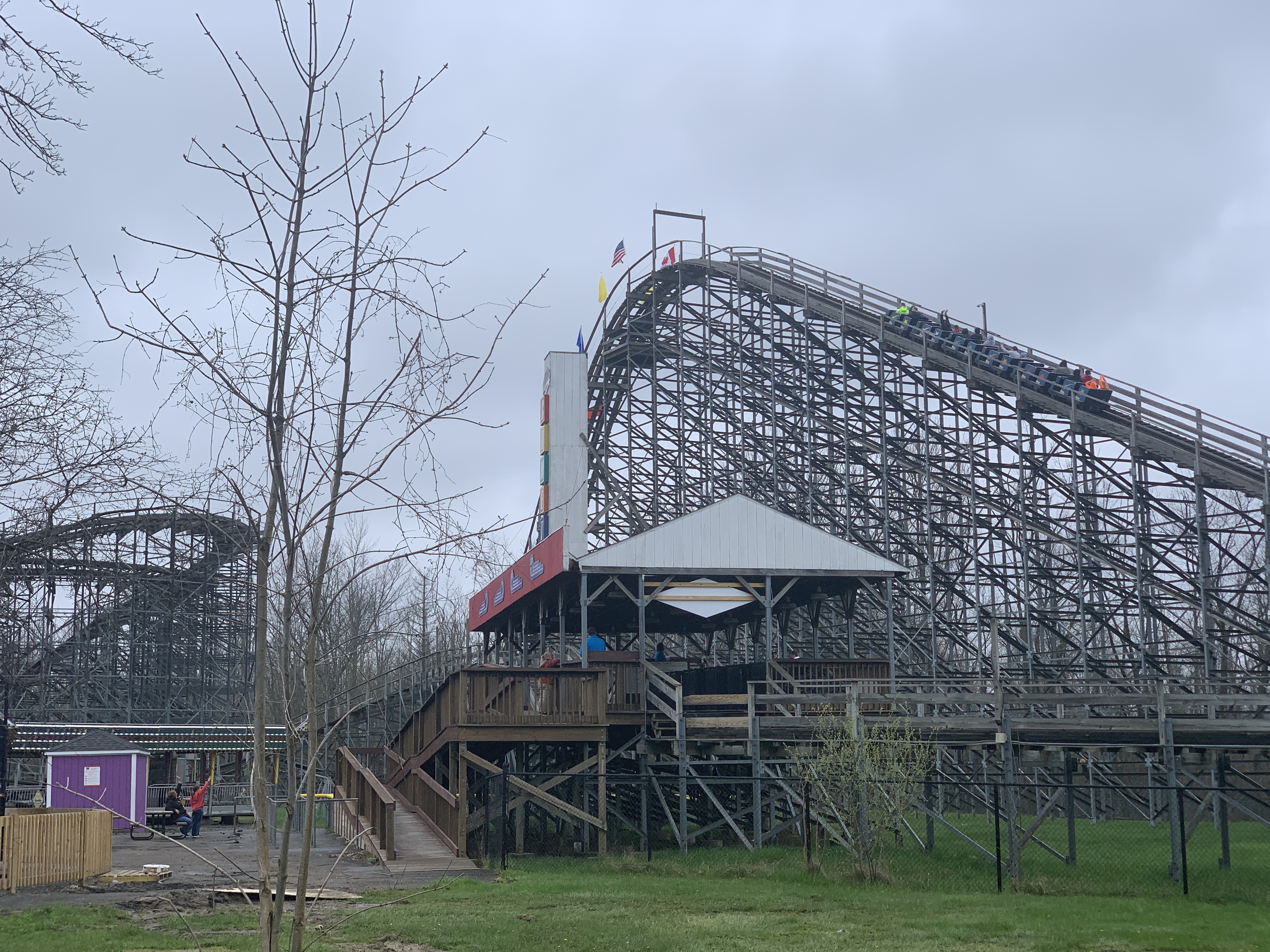 After I checked in and got comfortable at the hotel I chilled for a bit before changing clothes and heading out to dinner. I’d searched for the best sushi in Toronto, and a small place almost around the corner came up, Aoyama Shushi. So I headed there. After I arrived I was asked if I had a reservation, which I didn’t. I offered to come back the next evening with a reservation, but they were very accommodating and sat me in the middle of the tiny dining room. There were mostly other Japanese and Korean people there eating sushi. I ordered a Chef’s Choice Sashimi Plate and a bowl of cold soba with dipping sauce. It was legit and very, very good. In fact, it was better than the sashimi (and sushi) I’d had in Tokyo, and the noodles were comparable. Thank you google for the recommendation.

I’d had some intermittent issues with connectivity on my main phone since I’d arrived in Canada, so I ended up spending the next 90 minutes on the phone with Verizon to get a fix. Thankfully I had my backup phone that I use for work to call as the calls kept dropping out on my iPhone. They were able to get me switched to a network for the duration of my stay.

On recommendation from several people, I headed into Toronto for the evening to a couple of spots for a couple of drinks. At this point I really dug Canada, and Toronto especially. The people were fun and friendly, and the exchange rate was super if you had U$D. I knew immediately that I would be back to Toronto sooner rather than later. I’d talked to a friend of mine that lives in Toronto that I met through one of my other major hobbies (I met him on a Janet Jackson fan board about 15 years ago, and in person a couple times since), but he wasn’t able to make it out Saturday nite, which was fine because I’m very accustomed to making my own fun, and I did. He planned to meet up with me at Canada’s Wonderland the next day to hang out. It was a late nite, and I knew I’d be having an earlier than I’d wanted morning, but Sunday was the first full day in Canada and I had plans.