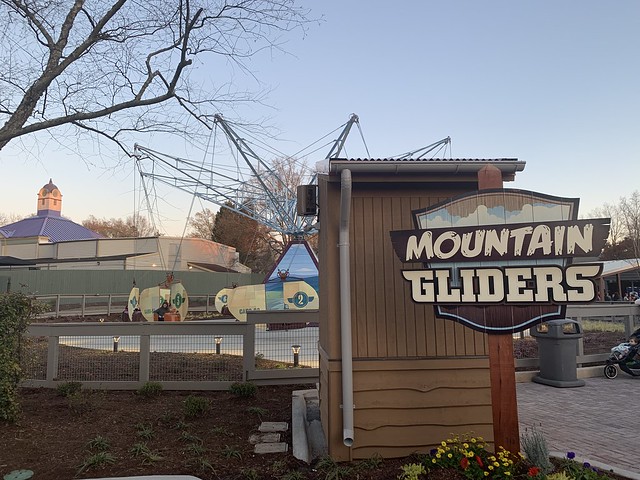 I noticed a new stage with live entertainment, saw the newly added fireplace with people sitting around, then saw the line, which was out in the midway. Then I saw the Mountain Gliders (Thanks KI!), and they look way nicer than I’ve ever seen them at Carowinds. So I got in the massive line. The new sign for the ride is something special. It has lights in the snake’s eyes, moonshine stills (the ride is themed to Granny’s Moonshine, that’s what the Copperhead Strike really is). They had a massive temporary queue that snaked (ha!) all through the open midway to the actual entrance. It was long. I waited in that line for about 3 hours, which is not something I normally do, and wasn’t planning on doing on Friday nite, but I did.

The whole area is nicely themed. The area around the new rides are very nice. And the queue for Copperhead Strike has the best theming I’ve seen out of a Cedar Fair park, save for maybe Knott’s. The whole queue is at Dollywood levels of theming, making the storyline about moonshine quite obvious if you know anything about making moonshine illegally in the mountains.

There was one slight breakdown as I was about 5 trains away. This was close to about 10 PM. Eventually, though, trains started launching again and after about 20 more minutes, I was in the station and in queue for the second row. I rode on the right side to take full advantage of the jo-jo roll. 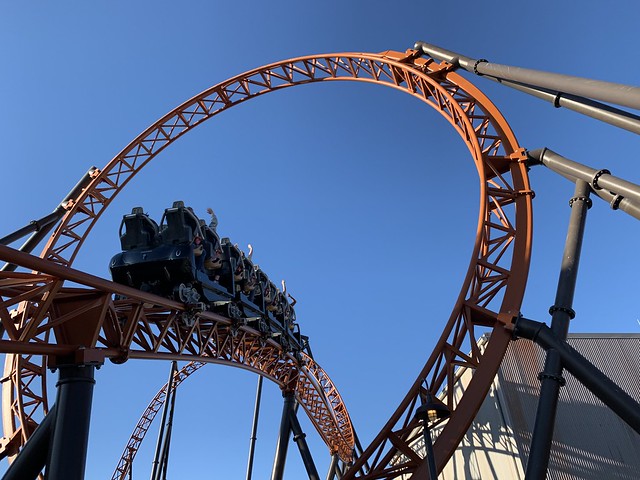 Copperhead Strike (383)-As the train moves out of the station you’re thrust forward into the jo-jo roll. I’ve been on Hydra a few times and never minded the maneuver on Hydra, but with only lap bars its a much different experience with a lot of hang time. Then you roll around and into the barn. I was unaware that, save for a themed room to start the launch, there would be anything going on in the actual barn. But I heard about the ride on media day from everyone I knew that was there, and without going into detail, they said it was similar to the Shed on Mystic Timbers. It was much better than the Shed, and without all of the preliminary hype that lead to a lot of disappointment on that ride. I won’t give it away, but it was very well done. Then you launch. The launch starts off mild but gets more forceful just before you head into the first inversion, a loop. There is a lot of hang time in that loop, and it’s glorious. Then you drop down and up over an airtime hill that delivers some decent ejector airtime. Next up you hit the corkscrew, followed by twists, turns, and hills swooping down and up towards the ride’s second launch, which, incidentally, includes a hill during the launch. Which was fun, but not aggressive. Next up is a double-up into an inverted top-hat element with super hang time at the top of it. Afterwards you drop down, turn, then another vertical loop followed by a kind of twist and dive element, then followed by a twisting mess of steel, hills, turns, swoops, and eventually a hop up into the brake run.

So that was it. The park was closed, which was fine as this was the reason I’d come. My first thought just after getting off of the ride was that it was a mini-Maverick. That’s a very good thing as I love Maverick. The following couple of hours and the next morning I saw that sentiment repeated several times on social media. I liked the ride a lot. Great pacing, really fun, super comfortable, just aggressive enough, and a very good second half. I was impressed, and glad that it exceeded my expectations. I celebrated by getting a pecan Cinibun and iced coffee.

On Saturday evening I picked my friend Stefan up and headed back down to the park. Maverick is his favorite coaster, so I told him that I though it was a mini-Maverick. We arrived at the park, which wasn’t super busy. After a bathroom break we headed to Harmony Hall for dinner. Then I remembered the new restaurant in Blueridge Junction. We headed there instead. I had rotisserie beef brisket, with greens, mac & cheese, a cobbler, and drink. I like the brisket at Harmony Hall, but this was really much better, and surprisingly great compared to most theme park food. The greens were also great, and the cobbler was good too. I may eat more here than I end up eating at Harmony Hall. This is a much better option than Wings, the former restaurant in this space. 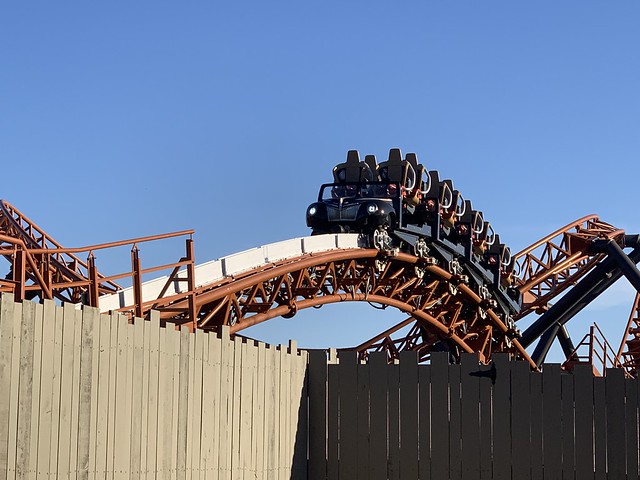 We headed over to Copperhead Strike next. The line started just at the real entrance to the queue. The ride was actually down, and people were fleeing the line in droves, so we decided to wait it out. And wait we did. It was nice to see the queue themeing in the daylight. The ride had a couple of hiccups. Also, the Fast Lane line was super long. I think they should have waited to add Fast Lane to this ride for the first 4 weekends or so, but that’s just me. It was another wait of about 2 hours, slightly more.

We did eventually get into the station and got in line for the last row. It was just as great the second time. Stefan definitely liked the ride, and we’re excited for the crowds to tame back down. I’ve found that Friday evenings after work in the early spring tend to have very light crowds, and helped to avoid long lines on Fury when it debuted, so I’m hoping that holds true. I can’t wait to ride more.

We’d planned to ride Fury, but the line was longer than we’d wanted, so we bailed on the park and went to Culvers. Once again, I’m so happy for opening weekend at Carowinds. There isn’t much left at the park for them to fix before the park is where it needs to be and can move forward. I love living in the bright future I predicted a few years ago, and can’t wait to see what the park has to offer over the next few years.