I can remember just a few weeks before opening weekend for Six Flags over Georgia in 2010, having just relocated to North Carolina, that I could attend my first opening weekend of any park while returning after a disastrous visit the previous spring for the annual Spring Fling ACE event. I was excited and made plans to leave after work that Friday, spending the weekend in Atlanta. Nine years later, I would return for opening weekend, though I’ve been to the park several times in the years since.

My plans included leaving work early Friday, for which I’d requested and had approved leave for. However, due to circumstances beyond my control, I was unable to leave work until 5 PM. This made my arrival closer to 11 PM, and wiped out any chance of dinner plans in the city, and due to my own hurried attitude, caused me to leave my debit card at a Wendy’s in South Carolina, which I didn’t realize until I was checking into my room. Thankfully my room was already paid for and I had credit cards and Apple Pay, so my arrival and check-in at the Westin Peachtree was quick and I was in my room in no time.

I did freshen up and head out for a slight bit to have a drink and try to enjoy the evening, but eventually made my way back to the Westin and my bed for the weekend. On Saturday morning I headed down to find the hotel’s breakfast buffet in the lobby. I’d gotten used to the breakfast buffet at Marriott and had toyed with going there, but as Westin is a Marriott property, and the buffet was $10 cheaper, I decided I would give it a go. It was just as good, and different enough. Afterwards I headed up to the room and got ready to head out to Six Flags. 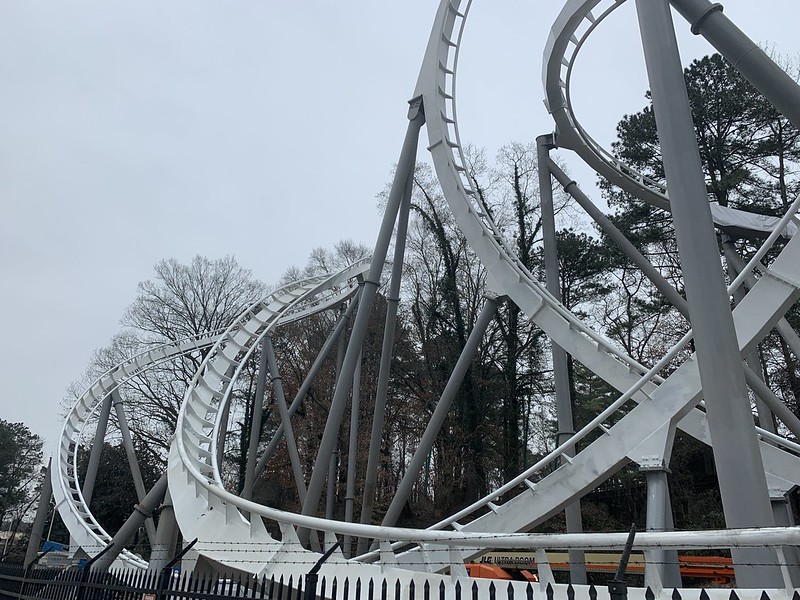 Arriving at the park around 11:15 AM I was greeted by a fairly empty parking lot and a park with light attendance, much as I’d imagined it would be when planning the trip. Walking from the parking lot to the front gate, the first thing I noticed was that Georgia Scorcher, the park’s stand-up coaster, was being primed and readied for painting, something that’s come about 10 years later than it needed to. The coaster looked terrible, and is one coaster flanking the front of the park. I can’t wait to see what it looks like.

So I headed over to the membership entrance and in to the park. I noticed lines weren’t long as I walked around by Cyclone and Acrophobia, which had no one in line. I could have picked up my 2 free skip the line passes that I receive each visit, but didn’t feel the need. There wasn’t a line to get the passes either, so I though that if I needed them earlier, I’d pick them up. The park looks nice, and they’ve been doing things over the last few years to spruce it up in places. My first ride of the day (and year) was Monster Mansion. The wait was maybe 20-25 minutes. I love dark rides and enjoy this on every visit. I do wish they’d do a little upkeep on the front facade, though, because the inside renovation a few years ago really holds up well.

Next I headed through the back of the park and eventually down into the Lickskillet area, walking by the area being prepared for this year’s new attraction, a Steampunk themed Pandemonium. The sign was erected and some theming, yet the ride has yet to start vertical construction. I walked through and up to the Metropolis area next. 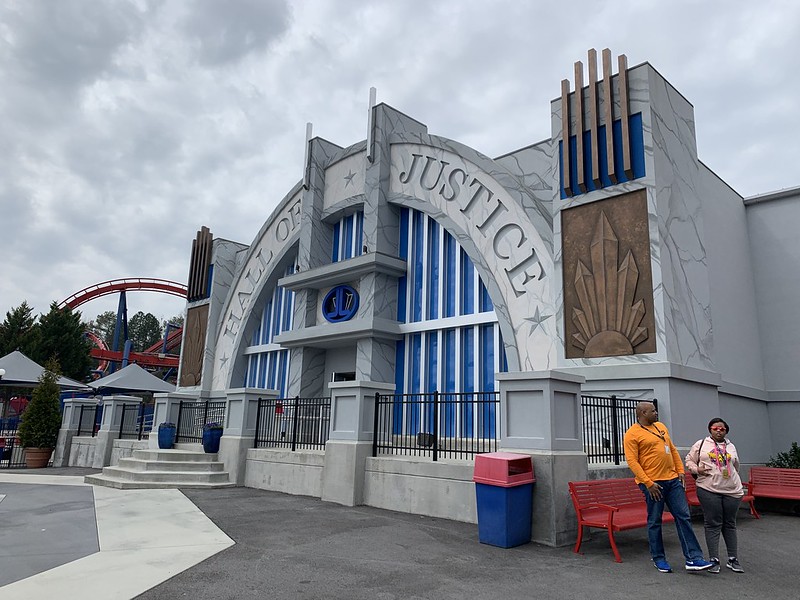 Since I’d ridden Monster Mansion first, I decided to continue the streak by riding Justice League: Battle for Metropolis, the park’s newest dark ride, and an outstanding addition, higher quality than most regional parks are known for. There was no wait to ride and in just a few moments my vehicle was fighting along with the Justice League against Lex Luthor, the Joker, and others. I enjoy these types of shooter dark rides, and this one is surprisingly really well done.

For my first roller coaster of the season I headed back around and got in line for Goliath, the park’s signature hyper-coaster. The wait was around 30 minutes as many coasters, this one included, were only running one train. Goliath is still an outstanding coaster, one of the best of the B&M Speed Coaster models. I hope it, too, gets repainted in the next few years.

My next destination was the park’s newest coaster, last year’s conversion of Georgia Cyclone to Twisted Cyclone. Again, it was about a 30 minute wait. I decided to ride in the back. This coaster, though short, packs a lot into a little. The first drop pulls you right over in the back and the reverse cobra roll element is very disorienting. The fan turn and series of inversions and airtime hills that follow are some of the best examples of what designers can do to make a ride thrilling yet comfortable. 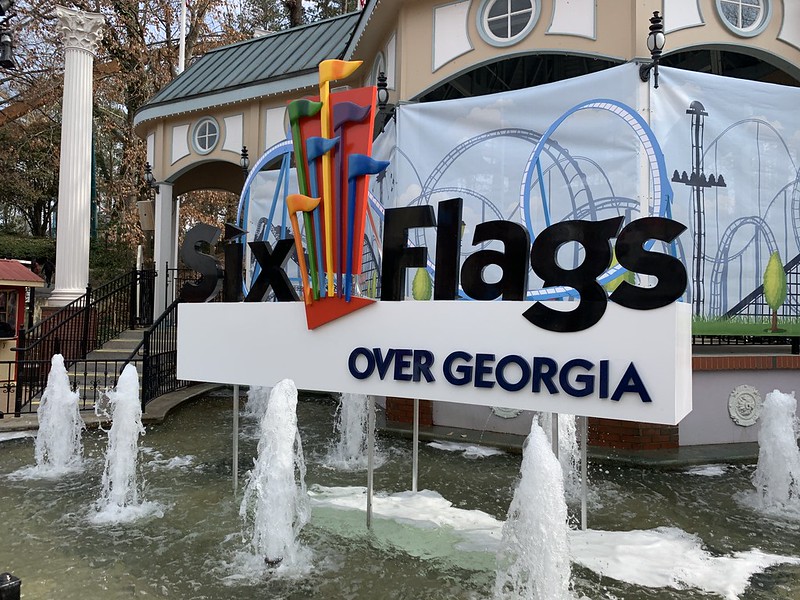 Heading back around the park I went into the Gotham City area next, making my way around the long way. Mindbender was running in top form. Finally, I headed over to my favorite of the Batmen rides. There was only a wait for the front row, and it was a short waits, so I rode Batman in the front to call it a day.

Six Flags over Georgia is a great park with the ability to kick it up a notch as long as they continue to add rides and renovate areas, while simultaneously keeping the park up. I could have stayed longer, but didn’t feel the need. I headed back to the Westin to rest for a bit. I’d planned to find the pool, but eventually I had dinner at Hsu’s about a block away and decided that Sunday would be a better pool morning.

I did go out for a drink on Saturday nite, but unfortunately my allergy attack from earlier in the day just kept getting worse and no medicine seemed to help. So instead of having another fun night on the town, I headed back to my room and ordered room service, in bed early, looking forward to breakfast and pool time on Sunday morning.

Sadly, that wasn’t what happened. I tried to wake up early enough on Sunday but just couldn’t get the strength to get up early. Instead I was in bed until about 11:30 AM. I didn’t feel well. My stomach was sour. So instead of having anything to eat and lounging at the pool, I drug myself to my car and headed home. It was a miserable drive, unfortunately, and I ended up missing 2 days of work. But I still love Atlanta. I’m sure I’ll be back this year, in fact, I may even go back in October for a fall visit.