We woke up and were out just before nine on Sunday morning. Breakfast was had from Duncan Donuts, and because we were in an AirBnB south of Cedar Point, our drive to Kings Island was only around 3 hours. After getting close to the park we stopped at Burger King for Blake and Isaac to get some food. We were all hungry, but I had a meal plan so was planning on getting lunch in the park. I did cheat a bit and get a small hamburger though.

Pulling up to the park I immediately noticed that the parking lot wasn’t really full. This would be my first visit to Kings Island on a holiday weekend and I didn’t know how it would be. This was a good sign. We arrived just around 1pm and headed to the front gate. After getting thru the front gate I suggested we head straight back to Mystic Timbers in case the line was long, so we went straight back. To my delight and surprise, the line was short, maybe about 15 minutes, so after putting our stuff in a locker we got in line.

Mystic Timbers–I have to admit, when it was being built, I wasn’t impressed with the ride, but as people started to ride it last year it became clear that Mystic Timbers was a hit. I started to get excited about finding out for myself. And it definitely is a hit. The first drop reminds me of Thunderhead. There is airtime on the hill over the lift. Then the ride really hits its stride as you head out in to the woods with massive amounts of GCI airtime. It isn’t severe ejector air, but it is really good. Then you have the turnaround and tunnel which is also a lot of fun. The return trip is just as insane, and then of course you hit the shed. Now, I knew what was in the shed, obviously, and had heard mostly negative comments about how it just wasn’t what people expected. I honestly thought it was a clever trick for stopping on the brakes at the end of the ride, and wish more rides would do something like that.  Overall, though Mystic Timbers is an amazing creation by GCI. 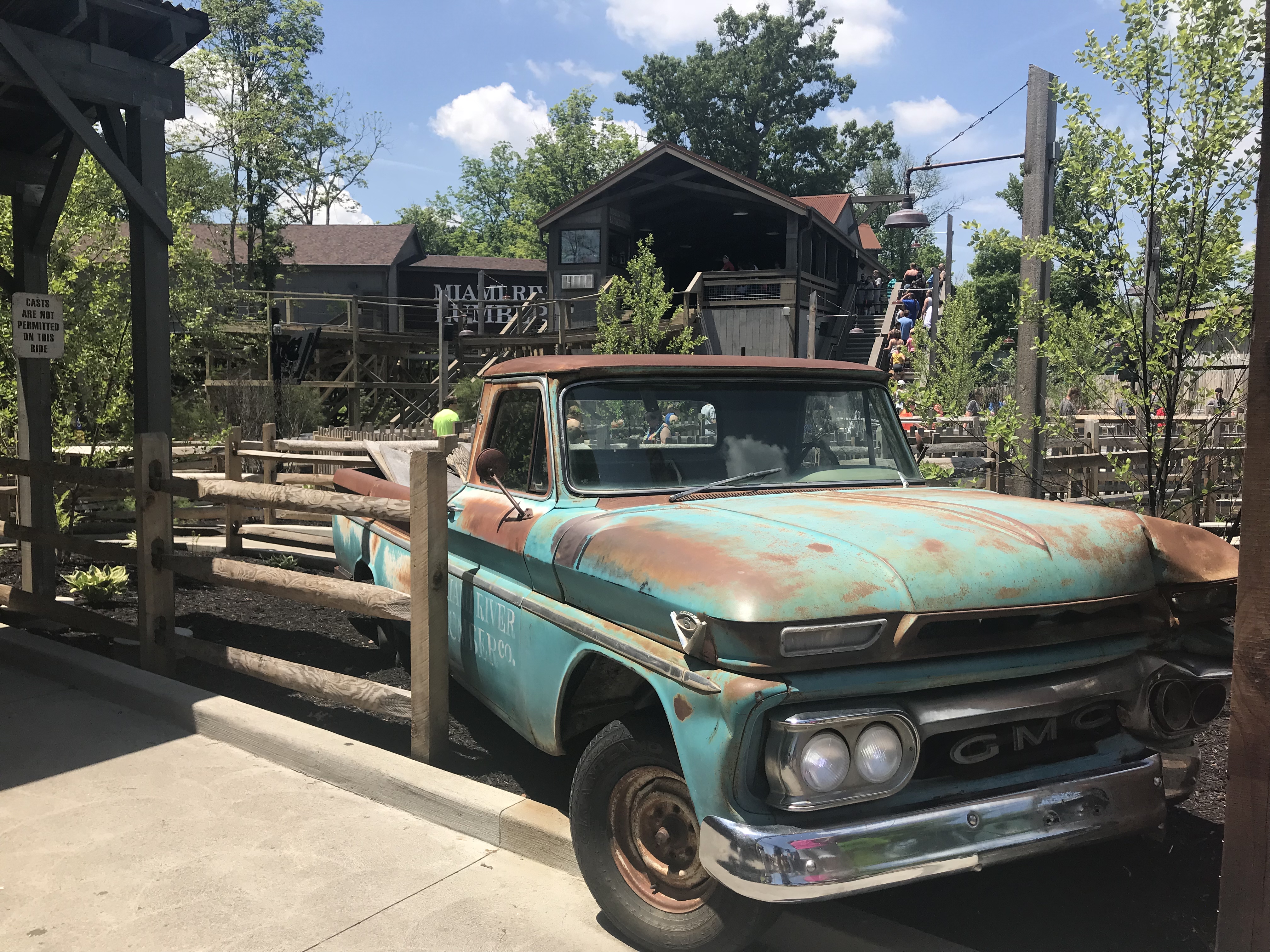 Our next destination was Diamondback. This is one of my favorite B&M hyper coasters.  It delivers in ways most of their others don’t. There were some dispatch issues, then a protein spill, but eventually we made it on. And it was just as good as its ever been. We were on near the back, and unlike the last time I was here with Isaac, Diamondback did not eat his keys to the car.

We wandered around the back of the park for a bit and then headed over to The Beast.  The line wasn’t incredibly long, but the attendant said the wait was about 45 minutes.  We waited maybe 30, sitting in the back of the train. I know that The Beast doesn’t get a lot of love anymore, and I get the reasons why. But taking the ride for what it is, I really like it. It still gives an out of control feeling thru the woods, and even more so at night, which we didn’t get to do on this visit. I really like The Beast, regardless of the lack of any real airtime.

I wanted to get lunch so that I could time my next meal pass meal for dinner, so we hit up LaRosa’s so I could get some pizza and bread sticks while Isaac and Blake chilled for a bit. Then we headed up to Banshee. This has solidified itself as my number one Inverted coaster. I was able to get better pictures today since the sky cooperated. It did not on the last visit. The first drop without the dip at the top is great and the whole course delivers.  I’m not huge on positive g forces and often don’t like inversions, but Banshee delivers them the right way. 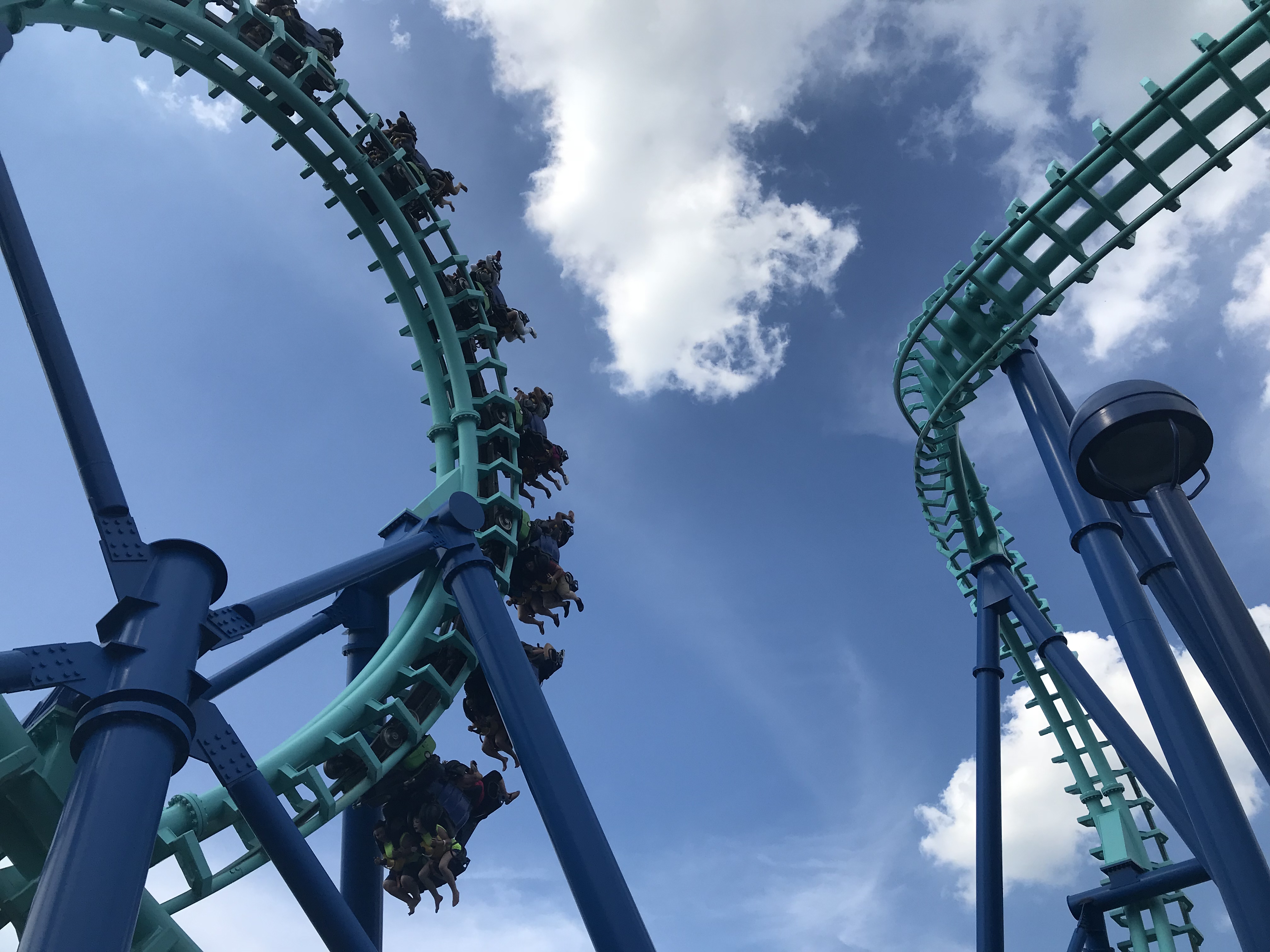 Since we were in the area we hit up The Bat next. I’m not a huge fan of suspended coasters, but this one seems to be the best of the batch that is left. The orange paint scheme looks much better, and I’m glad they decided to rename this coaster from Flight Deck. And since we were already close to Invertigo we headed to that line next. For a mild crowd day we waited about 30 minutes for our ride on Invertigo. I sat facing up the first spike. Its sad that this is the last one left in the U.S.  I think this is a much better version of the boomerang ride, though I’ve as of yet ridden a Giant Inverted Boomerang.

We had seen the advertisements for Cirque Gravity, which was at the theater in this particular area, and decided to head there next. These Cirque shows are very well done.  I’ve enjoyed the ones I’ve seen at Carowinds and Kings Island, which now totals, I believe, three different shows. After we were let out of the show we headed over to the kids section so that I could get some blue ice cream. Then because Blake’s phone was losing it’s charge, we went to the free charging station by the Diamondback gift shop before eventually having dinner at Red’s Hall of Fame Grille, since Isaac and I had a good experience the prior visit.  This visit, however, was not so great. Blake and I got our food in decent time, but Isaac had to go ask for his and at that point it was cold. So he took it back and we left.

One thing I don’t ever recall riding was the park’s remaining log flume, Race for your Life Charlie Brown. I’ve seen it themed to several different things over the years, but I don’t think I ever rode it and since the line was so short, we decided to give it a try, and boy was it a lot of fun! It was kind of a mixture between Carowinds lost log flume and Kings Dominion’s. 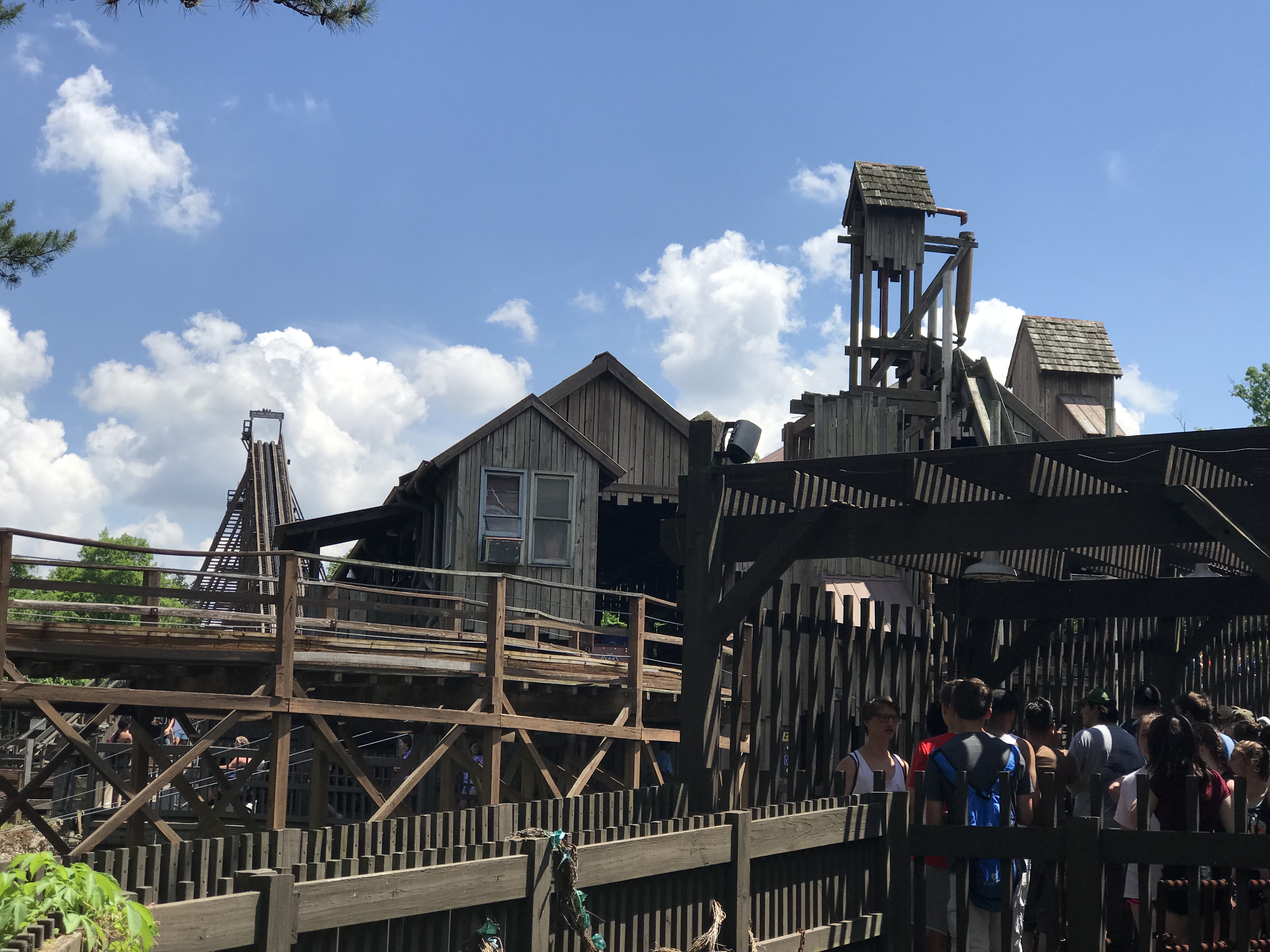 After that we took a spin on the KI & Miami Valley Railroad around the park. There was about a fifteen minute wait for a train, which gave us a nice break. Then we headed to Racer, which was running very well. I do miss having a backwards train though. And while we were in the area we hit up Adventure Express, which was running surprisingly really well, so much so that I could totally forgive the anticlimactic ending. Isaac still hadn’t eaten, so we tried a few different places, eventually settling on the Festhause.

But once again, he had a bad experience, so he had to leave without food again. Not sure whats going on with their food services, but it really wasn’t good on this trip. Walking around the park took up some time. Eventually we decided to hit up Flight of Fear for our last ride of the trip. Although the mid course brake hasn’t been off like it used to be in quite some time, this its still the superior version to Kings Dominion, where most of the queue has been left to rot and there isn’t usually lights in side. I’ve always preferred the Kings Island version, and it was a great way to cap off the night.

Once we were finished, we decided to forgo Best night rides and head to the front to see the lights and fireworks show, which was really pretty great. The use of LEDs and fireworks throughout International Street was spot on, and we enjoyed it quite a lot. After that we headed out to a nearby Walmart to stock up on some stuff and then headed to our really swell suite at the Doubletree in Blue Ashe. Score one for Hotwire. The next morning we woke up and had breakfast at the Bistro at the hotel, and it was surprisingly very good. Then it was a long drive home through Ohio, West Virginia, Virginia, and finally North Carolina.