Hurler at Kings Dominion had been closed for some time.  Rumors swirled, announcements were made, and in March of 2017 Twisted Timbers, the successor to Hurler opened to the public, an RMC hybrid coaster with the same layout but major re-profiling and 3 new inversions. Over the past few years I’ve spent Easter weekend in Virginia for Kings Dominion and Busch Gardens, but this year, though I had Good Friday off, I had prior plans on Saturday and couldn’t make a weekend of it as I had been. The weather outlook for Friday was not looking good initially and I considered going to Dollywood instead. Friday morning, however, the weather forecast was much better so I left my home just north of Charlotte, NC and headed north to Virginia.

I arrived at Kings Dominion around 1:30 and saw a fairly light crowd of cars in the parking lot. I noticed that Dominator wasn’t open, but lots of other visible rides were up.  Once I was in the park I went to the Burrito place on International Street, but the line was long. So I went to Panda Express. Long line there too. I looked on the KD App to see what restaurants took the all season meal plan and noticed one in Candy Apple Grove. I passed by Chik Fil A (another long line) and headed to Mac Bowl, which was kind of like a Subway for Mac & Cheese. It was decent. Then I headed to the back of the park to see what the wait for Twisted Timbers was like as it wasn’t listed on the app showing wait times though most every other ride in the park was a five or less minute wait.

The line was out near the repurposed store near the ride’s entrance. It didn’t take me long to figure out, though, that the ride was not open. They were sending a train out periodically with 6 people in, but the line was closed. I stood around for a bit and took some pictures, but eventually decided to leave the line. But before that I got a message that some friends of mine were in the park for the ride as well, so I texted Craig. It took a while for him to respond. But in the interim I headed over to Intimidator for a ride.  Sadly, just as I was about to get on, the ride went down. Bummer. So I headed to the next nearby coaster, Flight of Fear. I got in line, but sadly after a bit of standing and not moving, I left and headed to Grizzly. 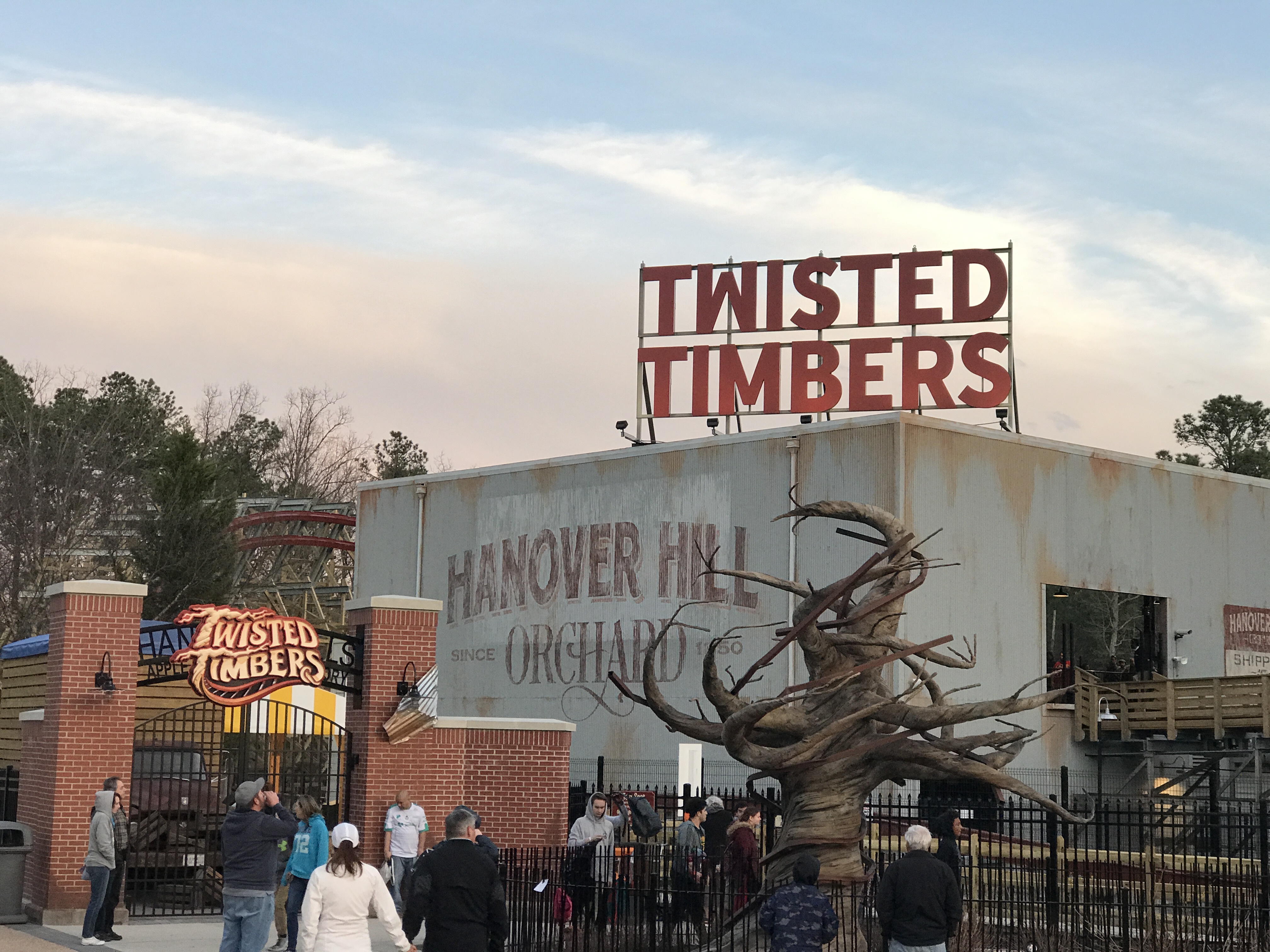 After heading across the front of the park and finally getting to Grizzly I was in the station. They were running one train and there wasn’t a very long wait. Once I was on the train it started pouring rain just as we dispatched. My ride on Grizzly was wet and cold, but the ride was running very well. Just before I got to ride Craig texted me and said they were eating at Mac Bowl so I headed there to meet them after my ride. I said my hellos to Kyle, Casey, and met Vikki, then Craig came out as well. After they finished we headed back to Twisted Timbers to see what was going on. The line situation was still the same, but they were sending some trains through so we stood in line for a while to see what would happen. After about an hour we gave up and went to ride some rides.

Craig wanted to check out the store while I ran to the restroom. When I was finished, I went in to the store, but they’d already left. I needed to buy more comfy shoes, so I did that quickly and then went over and met the group in line for Delirium. Then we headed over to Avalanche. We took two rides in the back of Avalanche. Afterwards we got in line for Volcano. I tried to figure out the Battle for Kings Dominion app but I couldn’t get it to work in line. After about 20 minutes we were on in the back, and Volcano is still running really well.

Next up it was time for a back seat ride on Intimidator 305, which still hauls through the course with some major airtime and laterals. Afterwards we got on Flight of Fear as well. I miss the music in the drum, but the lighting was all on. After that we walked across the park and hit up Grizzly again, noting that Twisted Timbers was testing. After we got off Grizzly we went over to Timbers, and sure enough, the line was open, so we got in line. They were running one train, but the crew was doing a good job at pushing people thru. We waited just under an hour. The queue is really well done, as is the repurposed station. 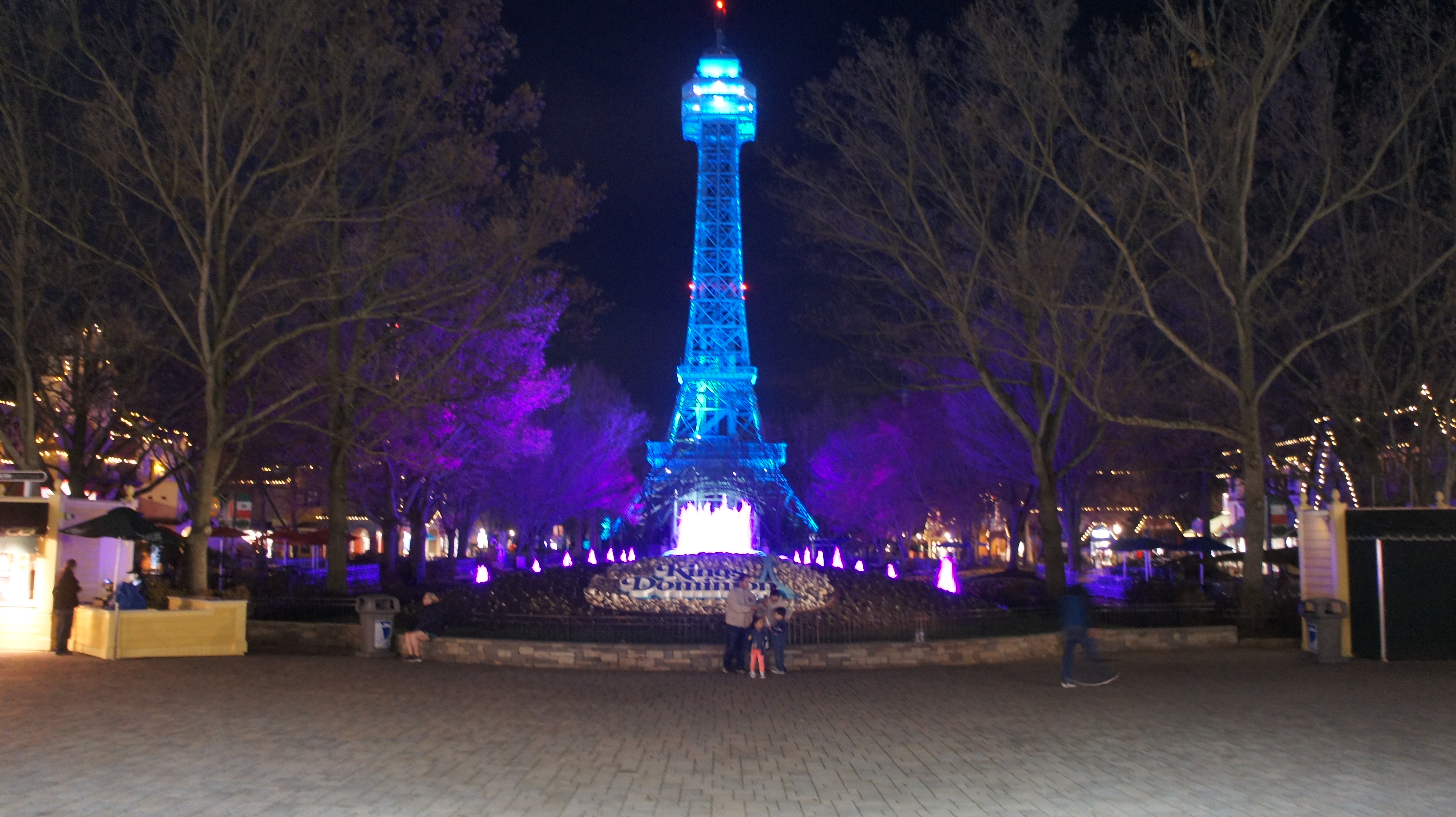 Twisted Timbers–We rode near the back. I rode with Vikki. The lift is fairly quick, then you dip down, bank, and turn directly into the inverting first drop. After that theres a small hop with airtime, then an overbanked turn back into another small hop then three airtime hills that delivered even in the cold. Then you hit the cutback inversion that was really fun, followed by a few hills, an outward banked turn, inversion, another turn, hills, and then brakes. It has really great airtime, good pacing. I liked the ride a lot. Twisted Timbers is a true reprofiling of Hurler. It has the same course, but the elements are all very different, and it works. The ride was a lot of fun.

So I was at the park for several hours before finally getting to ride Timbers. It was worth it. I’m not sure when I’ll get back to Kings Dominion, but their lineup of quality coasters just grew by one.

At this point it was around 9 PM and dark. I said my goodbyes to the group as I had a 4.5 hour ride home. First I had to head over and get my stuff out of the lockers by Intimidator before heading back to International Street to use my season meal pass once more at Panda Express before heading out. I’m glad I got to go ride Twisted Timbers, and look forward to my next visit when I can get a few rides in instead of just a credit run.