Waking up the next morning we had some of our leftover Korean food for breakfast before hitting up the pool, then heading out. We were going to find the Hollywood sign from a good vantage point so we headed to LA and then to Hollywood. We actually accidentally ended up at the foot of the hike up to the Hollywood sign. We weren’t prepared, nor did we have the time to do the hike, though I definitely want to do that at some point, so we walked a little bit up the trail before heading back down and driving back to Anaheim for day 2 of Disneyland, or in this case, California Adventure.

Today there were no GPS mishaps. We parked in the parking garage and headed to the Grand Californian on a much easier route this time, meeting up with our contact/new friend for a drink at the bar at the Grand Californian. She was starting her vacation today and wanted to start off right, so we gladly obliged. I had a drink made with Wild Turkey, Red Stag, and something that made it all taste a bit smokey. It was good.

I really did enjoy my visit to California Adventure on my last visit a decade ago, but the park has now grown in much more, and obviously there is that recent billion dollar make over. There were elements I liked from the original, but I won’t mourn their loss much because California Adventure, as it stands now, is amazing. We headed over to Pacific Wharf and straight to the main attraction there.

California Screamin’–My last visit was pre-trim brakes being added to the course, but without the audio working. This ride was with trim brakes and audio working. I think Screamin’ is a surprisingly adult ride for Disney, but I like it. The launch is fairly intense.  It’s a fairly long ride, with lots of drips and hills. Now, the 2 bunny hops towards the end weren’t nearly as powerful with ejector air like they used to be, but the ride isn’t necessarily ‘ruined’.  Just a tad more ‘family friendly’.  The loop is well done, and overall the ride has held up over the years.  I liked the addition of the audio this time.

Next, we headed over to explore Cars Land. Wow. It is such an amazingly detailed area. This is some of the best of Disney theming that I’d ever seen. It made me excited to get to Tokyo in 2017 even more. We toyed with Radiator Springs Racers fast passes, but the line wasn’t that long, so we got in and waited the 45 minutes instead.

Radiator Springs Racers–As much as I liked Test Track and the new ‘Tron’ Track, this is a much better use of the ride system. I really liked it. The first part going thru the animated scenes and interacting with other cars is a lot of fun, and the racing element was a hoot. Yes, I said it was a hoot. That’s how I’m describing it. All good fun. And worth the wait in the elaborately themed queue. 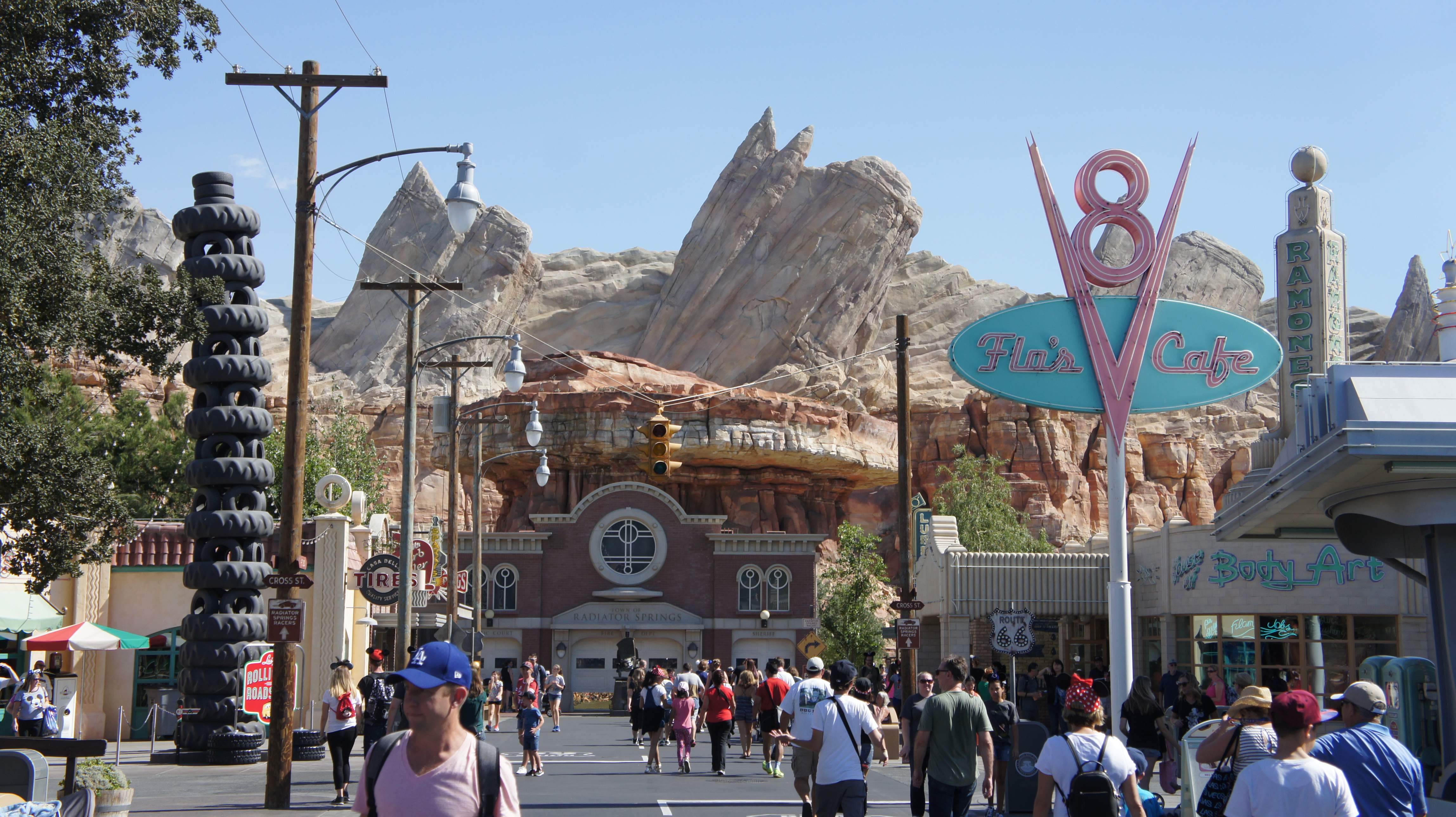 Since we were on a thrill ride kick already we walked over to pay our respects and get our last rides on Tower of terror before it closes down to transform into Guardians of the Galaxy Mission Breakout.

Twilight Zone Tower of Terror–The queue was full, but the wait wasn’t bad. It isn’t the Florida version, but I’ve always had a special place for this Tower of Terror  I’m not upset to see the theme change and hope that Florida version remains the same, but I really do like what it has in California. The queue is different. And they had 3 women in period clothing singing period music in the lobby, which was a nice touch. I was able to play with my newer camera in low light. The ride itself is the same great ride it always has been. I love the airtime that you get during the ride’s ups and downs. And I like the mirror floor that is different than the Florida version, though the 5th dimension in Florida is much, much better.

I’m sad that I couldn’t find a really good souvenir that conveyed that the ride was history.  I looked, but nothing stood out. Oh well. We headed to Starbucks on Buena Vista street for some caffeinated beverages then hit up the burger joint by Soarin’ (which coincidentally, I’d hit up on my last visit in 2005). After that we hit up Grizzly River Rapids. 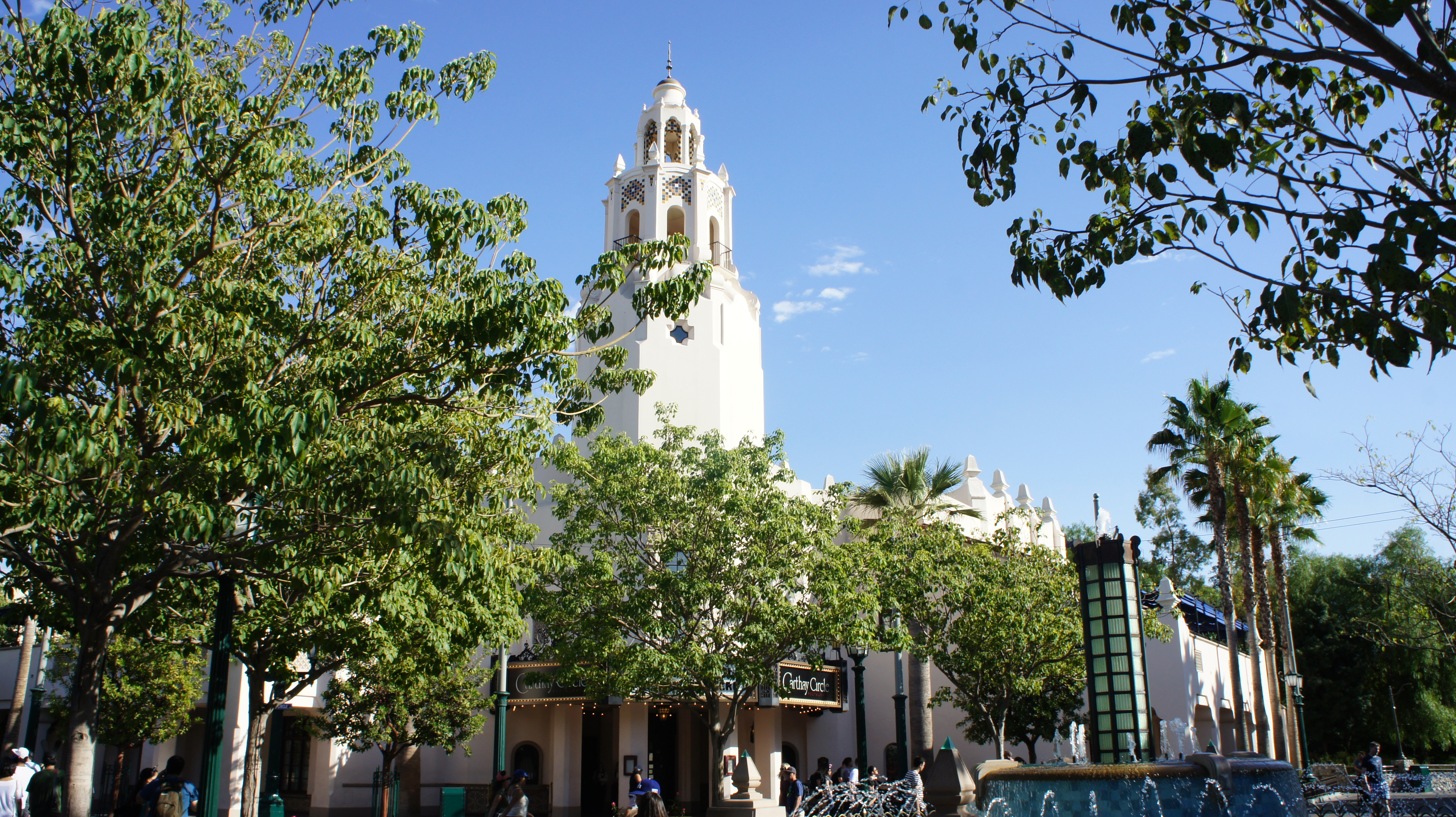 Grizzly River Rapids–First off, this ride is outstanding and a lot of fun. But our group made this one of the best experiences on a ride ever. There was a family with a mother, young daughter, and 2 older teen boys on one side of us, and a father with an 8 year old (or slightly younger) son to our other side. The dad jokingly said to his young son that if he gets scared, to grab on to the teenaged boy sitting beside him. I don’t think any of us would have expected what happened when the young boy latched on to the teen and hugged him tight for most of the ride. The teen’s family was laughing, the teen looked awkward (yet secretly liking it), and the boy’s dad was apologetic but amused. Isaac and I thought it was hilarious. Both families were just really fun, and the whole dynamic was great. Again, the ride was great, we got wet, I love the drops, and the theming is really well done.

We walked back over to the area overlooking the lagoon, took some pictures, then headed to the Golden Zephyr. As soon as we were getting on, the ride went down. We decided to come back. Instead, we headed to the Sun Wheel. The wait for a swinging cage was a bit long but worth it. Though not as terrifying as Deno’s Wonder Wheel, the Sun Wheel is a lot of fun, and a bit unnerving.

The sun was setting quickly now and the park was coming alive at nite. Of course, any park is usually great at nite, but this park went out of its way to be amazing at nite, and it shows. We had options, but Toy Story Midway Mania didn’t have a terrible wait, and, I mean, c’mon. It’s Midway Mania. If this were Florida the line would be 2 hours. So of course, we got in line. And of course, I won for our car. I really do love this ride. As does, like, everybody. 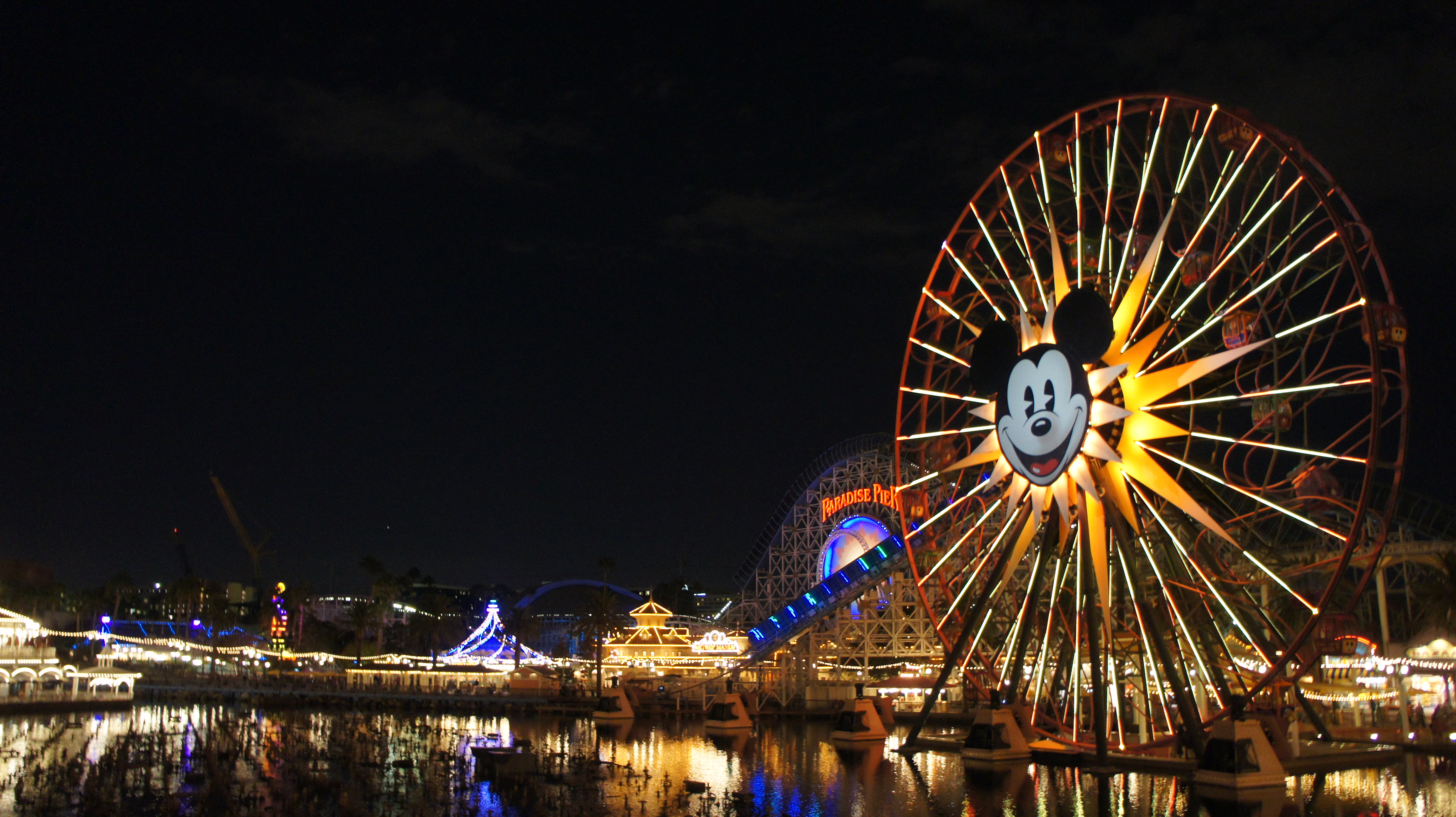 When we came out, it was dark. We had VIP reservations for World of Color, but it wasn’t quite time. We were trying to decide what to ride next. That ended up being Golden Zephyr. Afterwards, Isaac went on a hot dog hunt which, thanks to me, took us all around Pacific Wharf and back. We found the VIP section, but our names couldn’t be found initially on the list, so we were kind of put in another section which was okay…but had obstructed views.  Isaac went to get his hot dog now that he knew where, and as I was taking photos, a host came over and said that they had our two seats in VIP, so when Isaac came back, we headed on over.

World of Color-I’ve been looking forward to this for years. Ever since it was announced.  And it was worth it. The only thing I wish is that they were doing the Tron encore, but oh well. The show is spectacular. The whole park around the lagoon plays a part. Screamin’, the Wheel. The lighting, fire, water, and everything just plays so well together. I took hundreds of photos and videos. It was amazing. So, so worth it.

As we were leaving with the crowds, we went over, and thanks to Disney being such a friendly park, were able to walk in to Cars Land to take some night photos, then Buena Vista street at nite. We headed back to our car, stopped at In N Out for a late night snack (a California staple) and headed home to get some sleep. After some nite time pool time, of course.