I was just at Cedar Point in 2013 for my first ever Coastermania event. I didn’t expect I’d be going back again so soon as I rarely get to visit one of my favorite parks being that it is such a long drive. When they announced the conversion of Mantis to Rougarou I knew I wanted to get back, because I really hated Mantis. And with Maverick’s new restraints it was just too tempting. Then the stars aligned, I asked another coaster geek if he wanted to go, and since this would be his first visit and I tacked a few other parks on to sweeten the deal, and viola, we had a trip planned. Doug got to my house just before 6 AM on Friday, May 22, and off we were on our 9 hour drive to Sandusky.

This was the first time I’d actually made the drive with someone else, which was nice because I had someone to talk to. Somewhere in West Virginia I stopped and introduced Doug to the amazingness that is Tudor’s Biscuit World. It was so worth it. Then, around 4 PM we finally arrived in Sandusky. We had to make a few stops as I needed a new battery for my camera. I’d planned on getting a newer, better camera, but for now, this was what I had so we stopped and I picked up one of Kodak’s stupid proprietary camera batteries for $40 (and they wonder why they went bankrupt).

Then I realized that I forgot to grab a memory card, so we went from the battery store (yes, we went to a battery store) to Target where I picked up a $10 8GB card. Afterwards, we checked in to our motel for the next two nights. Disclaimer: Never stay at the Roadway Inn in Sandusky. Never book below a 3 star room on Hotwire. Even if the reviews are good. Anyway. We headed over to the park. It was a little chilly and honestly I wish I’d packed a hoodie, but I didn’t. Doug, on the other hand, brought his brand new warm hoodie with him. I knew the breeze on the lake would be cold. Oh well. We got to Cedar Point just before 5 PM.

I always tend to park in the Gemini lot, so we circled around so Doug could see the park and then got ready to head inside. The day was beautiful, if a bit cold. We got to the counter to pick up a ticket for Doug. I presented my Platinum Pass, and much to our surprise, it was only $10 to get Doug in. Then, when I asked how much the ticket would be for all day Saturday, we were even more delighted to be told $10. It was a promo that apparently wasn’t promoted very much, but Platinum Passholders could get tickets for $10 for other people for the weekend. I actually toyed with spreading some love and giving the people behind us the discount, but they had already prepaid for their ticket.

The park wasn’t extremely busy, which I figured would be the case. Fridays on Memorial Day weekend are rarely that busy at most parks in my experience. First up we headed over to Magnum. It had a small line, and stopped running for about 5 minutes but quickly restarted.

Magnum XL 200–We sat in the infamous 1-3 seat for Doug’s first ride. Magnum was running very well. The third hill always delivers airtime, and the return trip is always fun. The trim before the turn around wasn’t too strong, so no discomfort there. Every time I ride, I’m reminded of the time it hit so hard and sent me into my seat so hard that it knocked a kidney stone loose, causing an ER visit the following morning. But I still loved Magnum. 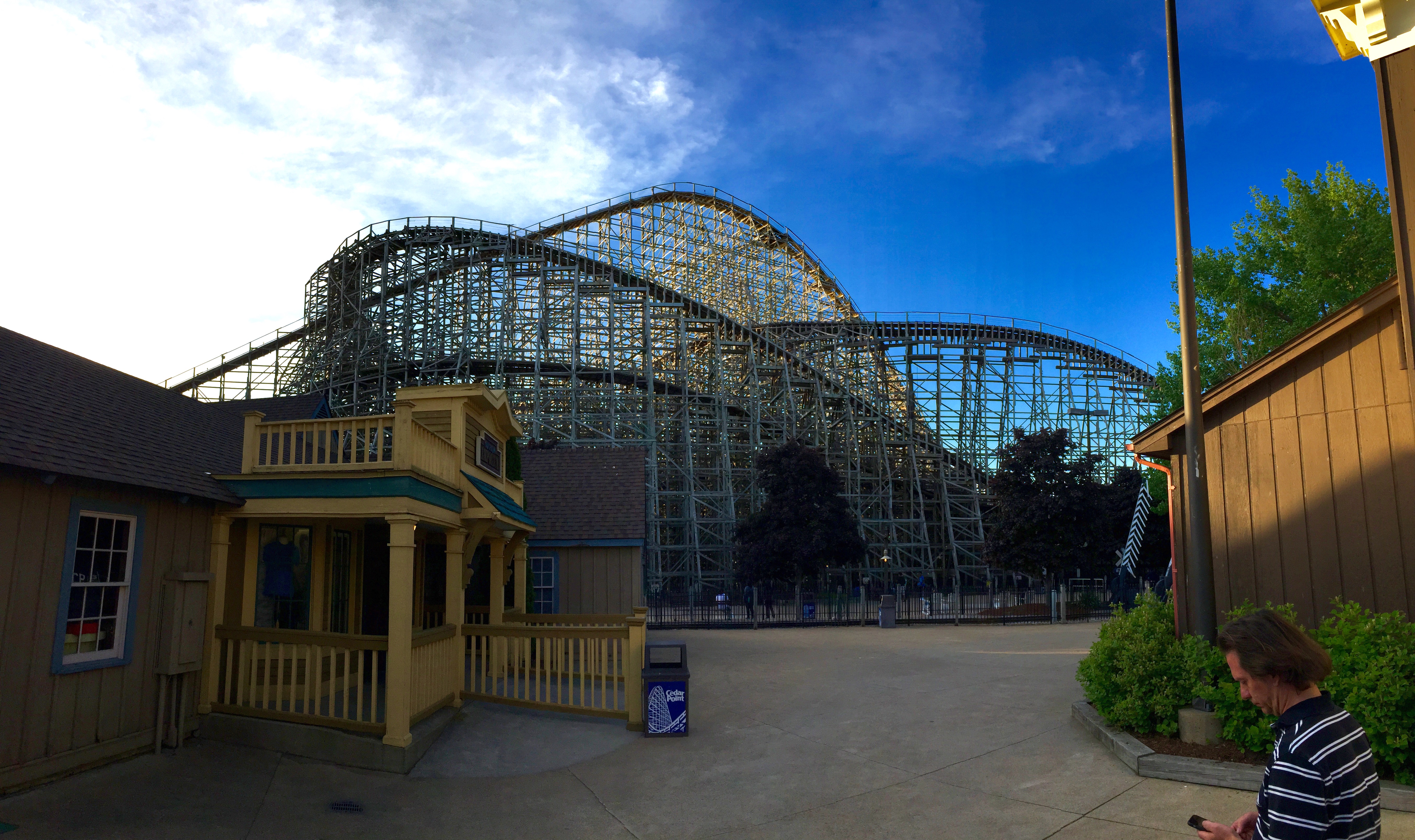 Walking over by Dragster we saw that it had about an hour line soo instead we walked over to Iron Dragon which may have had a 20 minute wait and since Doug needed the credit we knocked this one out of the way. It is what it is. It’s certainly not the best, but it is a fun ride, and kids tend to like it. You get some good views of Dragster and Rougarou, plus the pretzel turnaround was fun. There just isn’t much to say about the ride that hasn’t been said of it during its lifetime. Next we headed over to the park’s newest attraction on an old track, Rougarou (Where are you?!).

Rougarou–The ride looked so much better with its new paint job. And the station looked neat as well with the Rougarou eyes on the sides of the station. I think our wait was about 30 minutes. That part was so much better than any wait times I had with Mantis, as they were hauling getting people on the train to dispatch, and not sending out half empty trains like they always tended to do on Mantis. This change made a world of difference for an otherwise unimpressive coaster. After the lift you dip and turn towards the first drop. The trim on the first drop was no longer on. Then you head up into the loop followed by the dive loop and 2 inclined loops. The second half is mostly close the the ground with corkscrews thrown in for good measure. This layout was really much better for a floorless coaster. The ride is now very fun and re-ridable, everything Mantis was not.

Up next we walked to Millennium Force but it was down, so instead we headed over to the Red Garter Saloon for dinner and drinks. I’m not a fan of country music and the show was going on, but whatever. I had a sub that was included with my Dining Season Pass and a RougaBrew beer. We headed back thru Frontier Trail to check out the line for Maverick, which was way too long and we were going to have all day with Fast Lane on Saturday, so we went over to Mean Streak instead.

Mean Streak–Everyone says it was rough. I’d contended for years that it wasn’t rough, it was just boring. Doug agreed. The trim killed any excitement it may have had, but the ride literally just meanders around after the first drop. In fact, I didn’t even bother riding on my previous visit, and this visit I really only rode it because Doug had never ridden. I know it’s not on the plans at this point, but in the future, an RMC makeover of Mean Streak would, in my opinion, fix the last ‘bad’ coaster in the park. And by bad, I mean absolutely boring. (Update: Would you look at that…)

I took Doug thru the Town Hall Museum. Now that I’d discovered it I always make it a point to visit; I love going in there and looking at all the old pictures, models and what not. It really does have great atmosphere. Next we walked over to Gemini midway which had changed significantly since the last time I was there, and it looked absolutely amazing. I loved the string lights overhead. I loved the LED light packages on the rides there. A few nice flat rides with great light packages really make a park pop at nite time. Since we were there, we rode one of my favorites.

Gemini–We rode both sides. They weren’t synching up to race for what seemed like most of the weekend tough we did get one or 2 racing rides. The ride was running as good as it ever ha, smooth and fun, with airtime in all the right places, and some hand slapping. We rode both sides of the ride before moving on, but honestly, I could have marathoned it. And there was no line so it would have been easy to do. 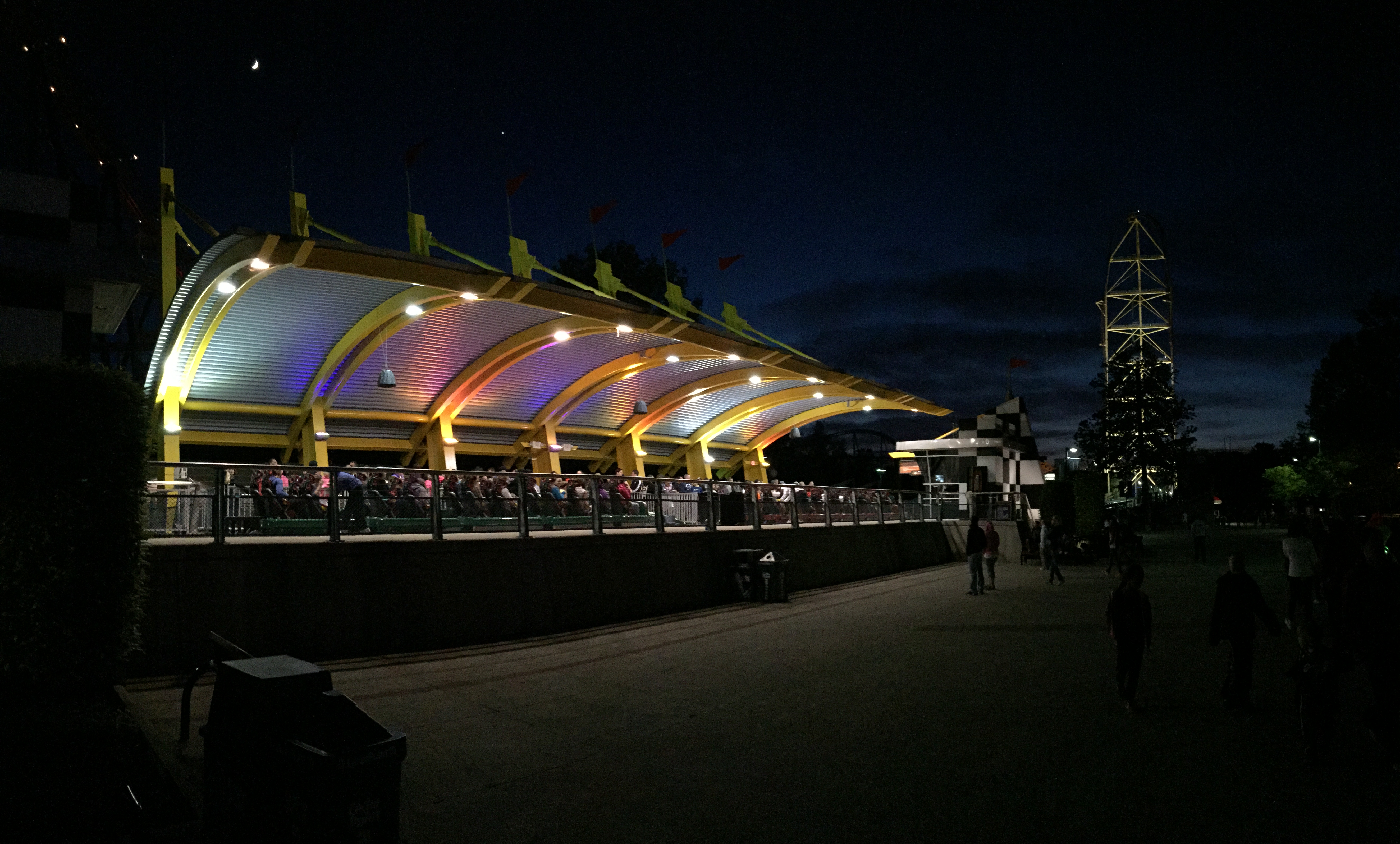 Next we walked over to Pipe Scream and gave it a spin. It made me a little queasy, but I’d still love to see one of these at Carowinds. We walked around and saw that Dragster didn’t have but about a 40 minute wait so we got in line.

Top Thrill Dragster–It’s such a great thrill ride yet such a terrible coaster, but way better than Kingda Ka. We opted for a back seat ride. When I first rode Dragster, it terrified me up till the actual launch. Then I loved it. Again, not as a coaster, but as a great thrill ride. Doug agreed with me. And it was running as good as ever. I love the launch and how it literally takes your breath away. And if you can see it, that view…IS…AMAZING.

By this point the park was near closing time and it was dark which meant that Magnum was sitting darkly across the midway beckoning for us to come and get some end of the night rides in the dark, so we headed to Magnum from TTD across the midway. 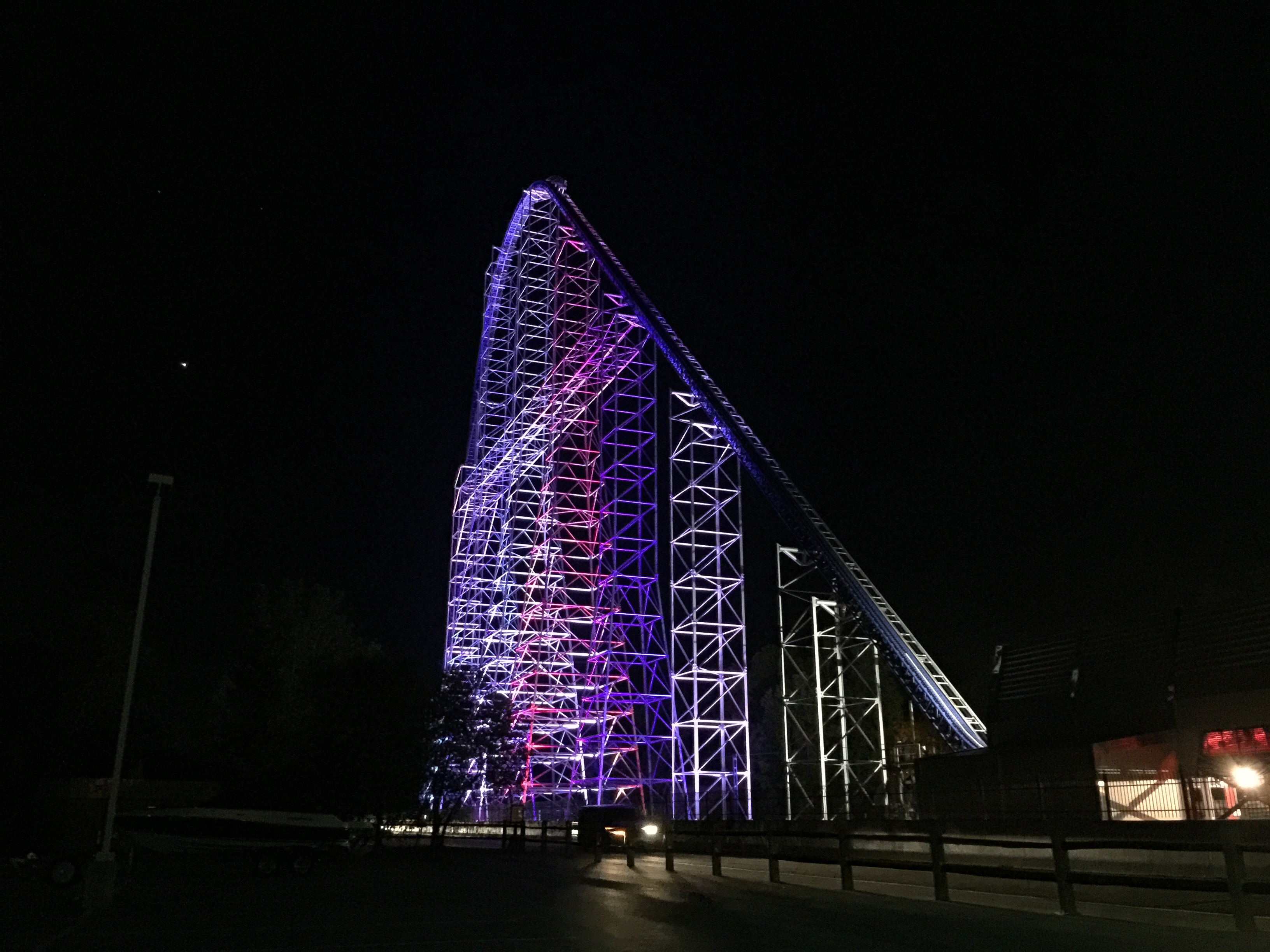 Magnum XL 200–There was still a hint of sunlight in the corner of the lake, while the rest of the skies around us were pitch black. Magnum is already a great ride. The last time I was here we finished the nite on Magnum for Coastermania ERT. But I’d never had rides like the 2 we took this time. It was already breathtaking that you look out on the second hill to see nothing before you and then you drop and turn. The third his was amazing, but then something happened that I’d never had happen before…no trim brakes! Oh My Goodness! I already loved Magnum, but these 2 rides pushed it up in the rankings because that second half was brutally fantastic without the trims. Amazing ejector air in the dark with pitch black tunnels! We ran around for another ride (or was it 3? I don’t remember…) because it was so amazing.

The evening was really wonderful. I absolutely love Cedar Point, and really wish it wasn’t so far away. We finished the night with some pictures and headed to grab a bite at McDonalds then back to the hotel to rest up for a full day at one of my favorite parks.