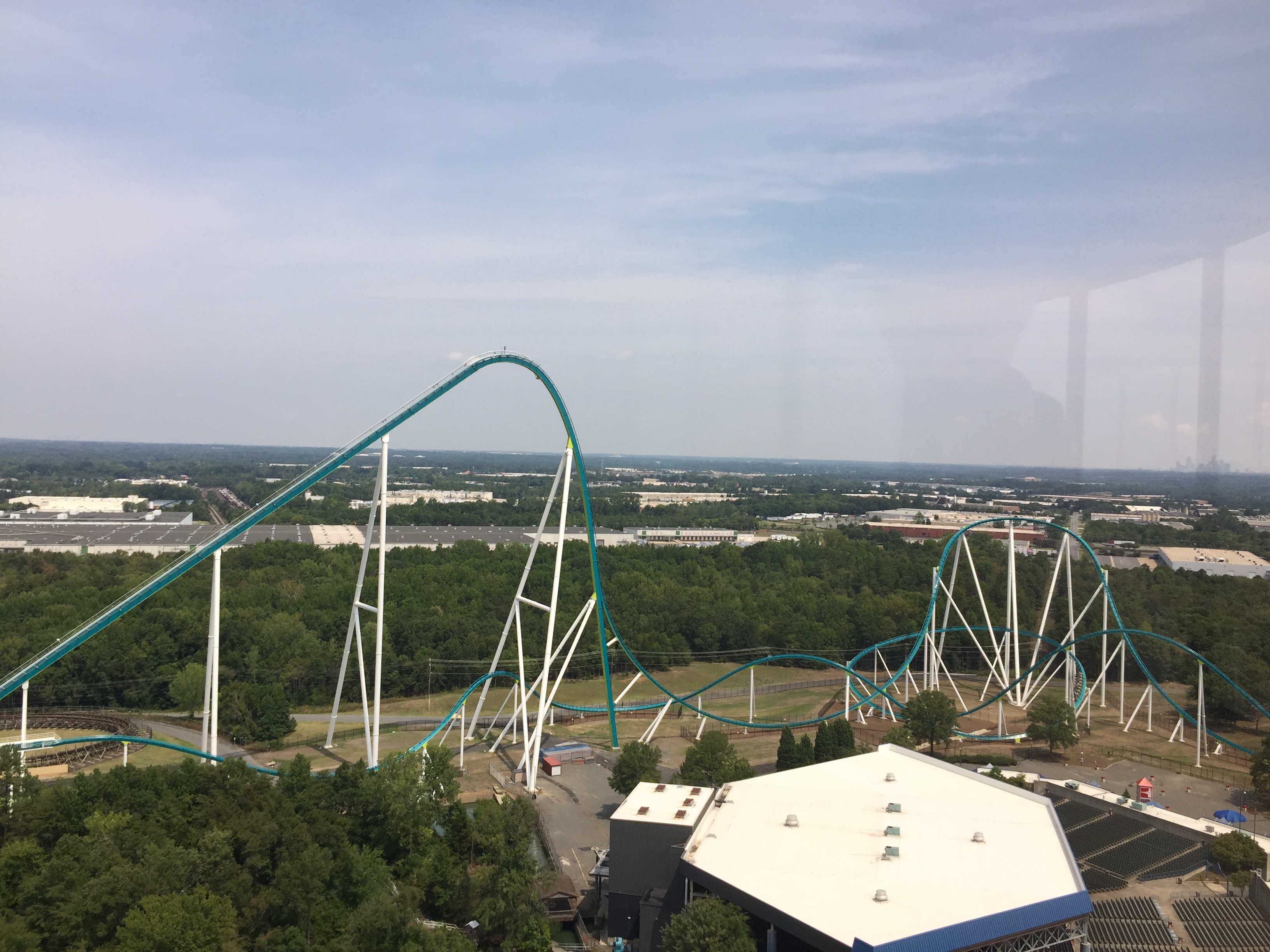 For those of you familiar with the park, the line started at the exit of the covered walkway near the Scrambler. I had visions of Banshee’s opening day waits of 4 hours but, thankfully, it wasn’t like that. The whole line, which went into the Action Zone, then down an access road close to the queue, then into the queue took about an hour forty. Not bad, actually. And it moved. Constantly. A full queue would take an hour or less to move.

There were some nice touches in the queue, since it was getting dark they had color changing LEDs shining on the lift structure like Millennium Force. And there were color changing LEDs under the sun shades that pulsated as well. Oh, and the lift hill motor, which is right by the last section of queue, was really loud.  My first ride was at nite in row 7 (of 8). The crowd was VERY psyched and the crew was very good. They assign seats, but I didn’t notice them asking for single riders which would have been a big help from what I saw.

The ride dispatches and starts going swiftly up the lift. About a third of the way up, you speed up. Really fast. Then it slowed down just at the top at 325 feet in the air. The first drop was amazing. Much what you would expect from any Giga coaster. You speed up into the first overbanked turn and for what it is, it was intense. The speed was amazing, you get some positive G forces and the drop off had great airtime. But what surprised me was the odd sideways airtime that you got on the next two banked rampy hills. Honestly? It was like exaggerated trick-track with airtime, all at very high speed.

Then you fly up and around into the far turnaround at the end of the ride. I kind of knew what to expect here as Goliath that debuted at Six Flags Great America the previous year had similar elements, and this did not disappoint. Again, there was airtime all while you’re sideways. Then you drop off of the treble clef shaped turn around and it was amazing. Scary even. Flying under the bridge and then up into the next banked hill, there is more airtime.

After that, you hit the first big hill after the drop. There is a trim there, magnetic, and the 2 rides I got really slowed the train down noticeably. Having said that, much like the trim on Diamondback, I really didn’t mind because it had the added effect of ejecting you out of your seat going over the hill. The last two bunny hops had ample airtime. If you go in expecting Intamin or RMC-esq airtime, that’s not what this was. But it was some of the strongest airtime on a B&M speed coaster. It was just as good as Nitro, Goliath (SFoG), and Diamondback. Better than Intimidator across the park, a solid ride in it’s own right.

This was the best B&M coaster I’d ever ridden. It fell in to my top 20 favorite coasters. A very solid coaster. It interacts with the park’s entrance amazingly. It has what it takes to help transition Carowinds to the next level. Me and some friends from Carowinds Connection had a chat with Mike, the GM at the time, in Harmony Hall. He’s great. Having him and Jerry running that park as it moved forward was what the park needed. Carowinds has a very bright future. And I can’t wait for it.