My second full Disney day was spent at the Studios park. I’d never spent the entire day there. But this time I’d get it all crammed in. Who says it isn’t a full day park? I paid my money to park and took the tram to the front of the park. Once inside I did what I meant to do the day before, and picked up a Magic Band, which was really nifty. One of the first things I did was to head to Star Tours, which was down last time as they changed over to the then current version. It was about a 30 minute wait.

Star Tours-I’d ridden the original version of the ride at Disneyland in 2005. I’m really not into most motion sims as they tend to make me sick. Mission Space the previous day did a number because it was so intense, and even though it was very well done, Star Tours made me queasy. The 3D effects just don’t work that well for me, I’m not sure if it’s because I’ve had Lazik or what, but overall it was still a solid attraction. Its just not one that I’ll be re-riding muc, even with the random changes. We got the Hoth mission.

I couldn’t get a fast pass for Midway Mania, which is a shame as I love the ride, and I didn’t get to ride it on this visit. I did, however, get to test out the slow motion video capture on my iPhone 6 Plus at Lights, Motors, Action! This was the first time I’d seen the show. It was packed, and it was really well done. I’d heard the rumors that it would be ripped out soon, so I’m glad I was able to ride as that ended up proving true. 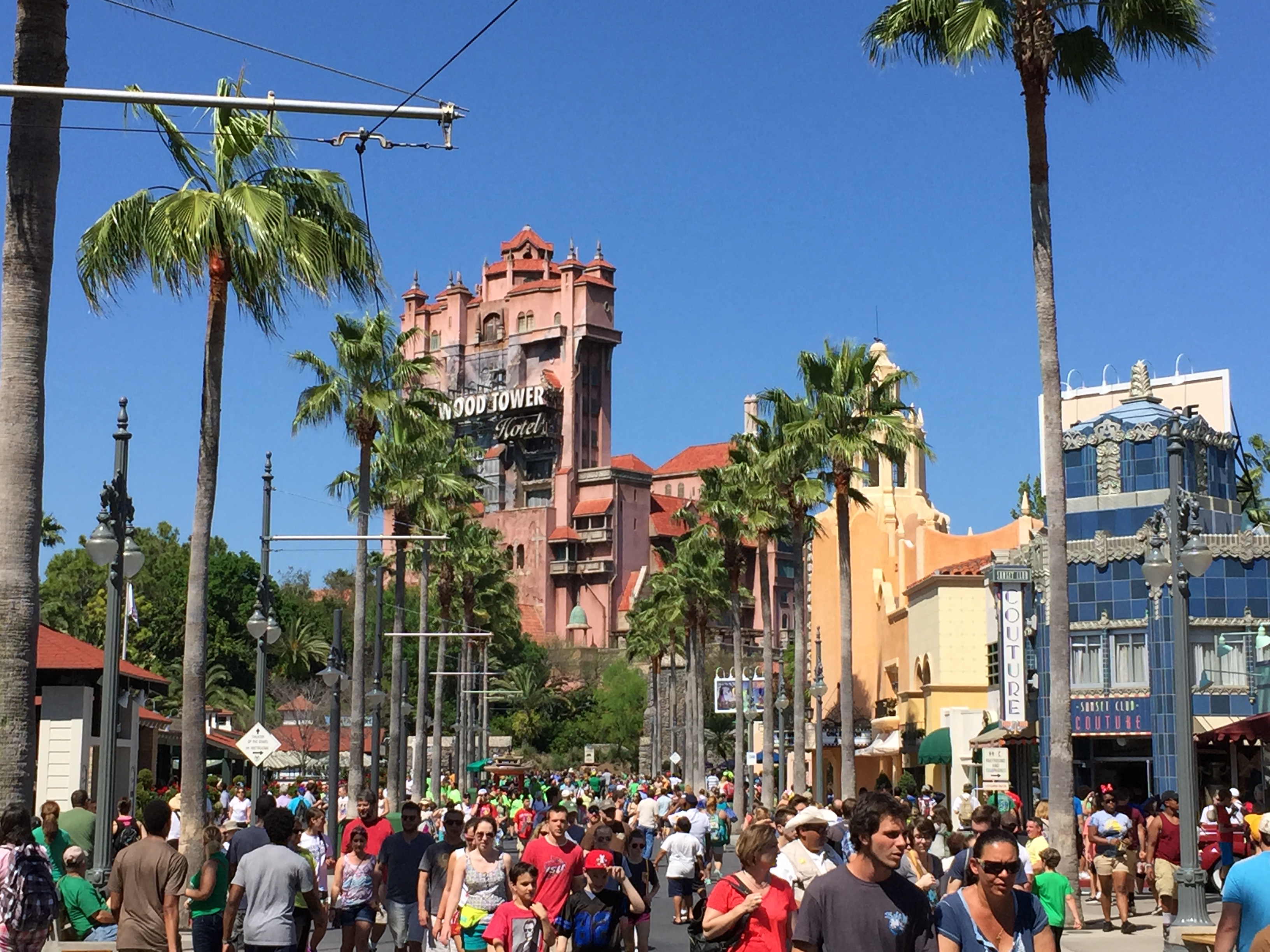 Up next I went into the One Man’s Dream exhibit. It was nice, and I loved the miniature versions of many of the rides and castles. The propaganda film at the end was interesting as well. But it *was* still propaganda, in my humble opinion. Next it was time for one of my favorites.

Twilight Zone Tower of Terror-I love this ride. I used to love the California version more because I felt it was more aggressive. I know the Studios version has randomly programmed falls, but I’d never gotten a good one before this trip. I waited about 40 minutes, even though I had a fast pass for later. I don’t mind standing in line, though, because it’s a beautiful courtyard, and the inside is really well done as well. This ride really lets you suspend disbelief just by looking like a real, old hotel. I really got some airtime on this one, and had a really good group sitting in the front. My new shtick is to make sure I turn to the person beside me and let them know I throw up easy just as the doors shut. It worked every time.

Next I went over and got in line for Rock N Rollercoaster. I got in the single rider line as the regular line was about 90 minutes. I think I may have waited 30-40 minutes.

Rock ‘N’ Rollercoaster–This ride was a little bit shakier than I’d experienced in the past. It was still good, but it’s no Premier. The layout was really good. Launching into the first set of inversions is fun, and then it’s very much out of control and in the dark. And for a Vekoma, it wasn’t half bad. I just wish they’d go the Premier route and get rid of the OTSRs. Oh well, its still worth a ride every time. 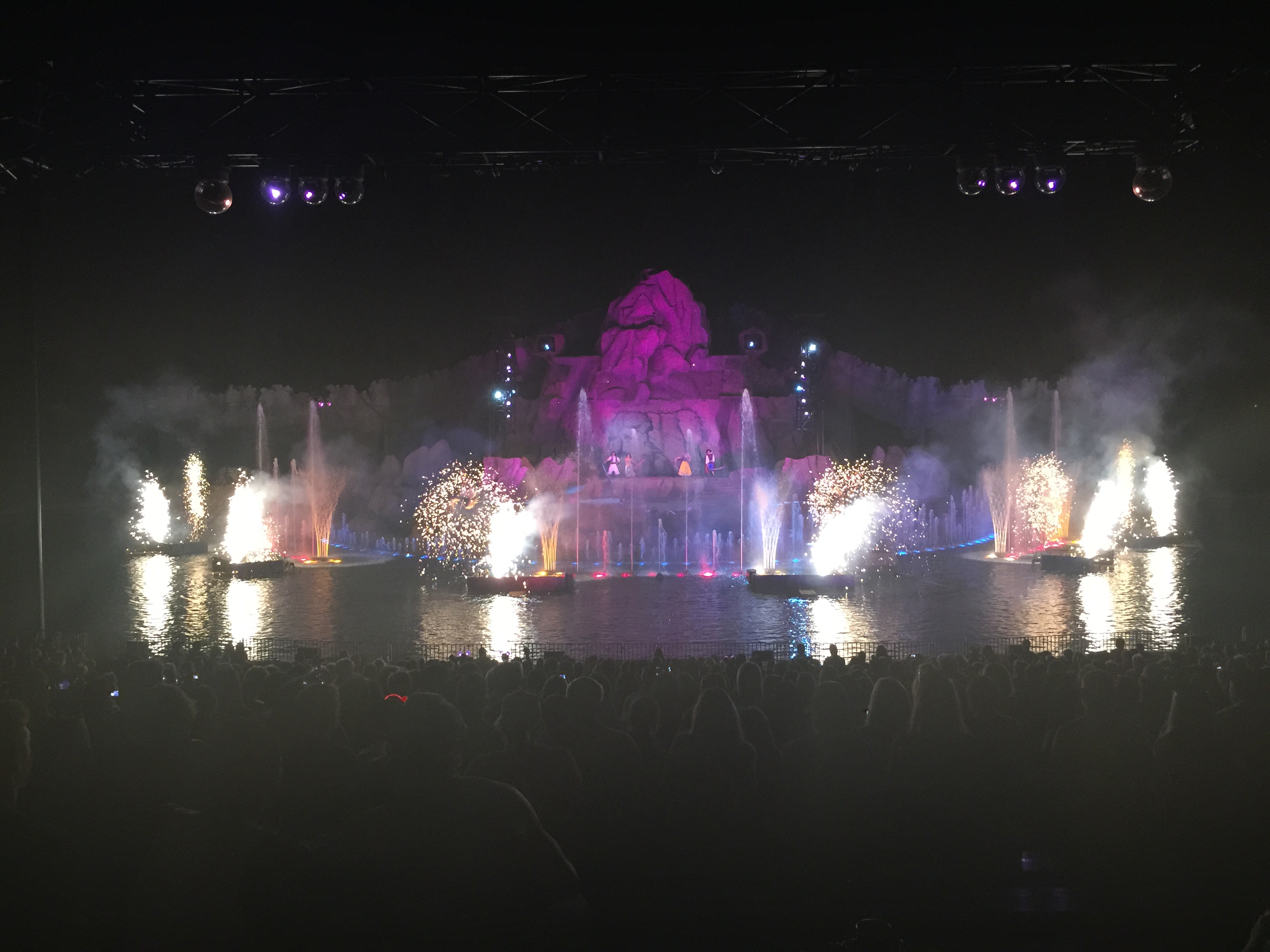 Walking around I took some pictures before having lunch. After lunch, I was close to the Star Tours area, so I watched the show with the young children learning to be Jedi. It was neat. I loved how they had the make your own Lightsaber shop. It had a line. Then I went to the Great Movie Ride. Two things were better this time. First, no big goofy hat out front to block my photos of the Chinese Theater. Second, I had a much better crew this time. Last time the girl ‘gangster’ wasn’t very good. The guy we had this time was good.

The next thing I stumbled into was The Little Mermaid stage show. It was good, if very short. Then I headed back over for more rides on Tower of Terror before heading to the amphitheater to see Fantasmic. I had a fast pass for the later show, and I was still an hour early for this show, so I left and went back to ride more Tower of Terror, my first time in the dark. I rode about 4 times before wandering around the park some more. By this point, there wasn’t much of a line for anything. Well, except Midway Mania. Eventually I did head back over to Fantasmic.

How was Fantasmic? Meh. It had potential. I just felt they spent too much time showing clips of movies on the water projectors when there was so much more to be done. It was okay, but honestly, I could have left the park earlier and went and watched Wishes again.