I loved Busch Gardens Williamsburg. Since my first visit I’d been back a few times, and I love the theming, the rides, the food, and the overall atmosphere. I really liked Sea World San Antonio as well for having the same type of atmosphere. And so I was really excited to finally visit Busch Gardens Tampa. On Wednesday Morning my parents drove me to Rob’s apartment complex in Orlando and we headed out from there, getting to the park sometime in the early afternoon.

Once we got thru the gate I was struck by how similar yet different this was from the park in Williamsburg. It had the familiar semi-claustrophobic, but really awesome entrance. And it was very nicely done. The park wasn’t very busy, which was great. I definitely wanted to get back there sooner rather than later already. Our first ‘attraction’ was a bird sanctuary. We walked thru and looked at the themed topiaries around the park, and eventually came to the first credit, Air Grover.

I’m not going to to a rundown for this, it was your basic Zierer kiddy coaster that I’d ridden plenty of times. It was a cute theme, and it was a credit so ‘nuff said. We walked around the park even more trying to decide what to do. I definitely wanted to ride the new drop tower, Falcon’s Fury before I chickened out. But our first major coaster ended up being Sheikra. 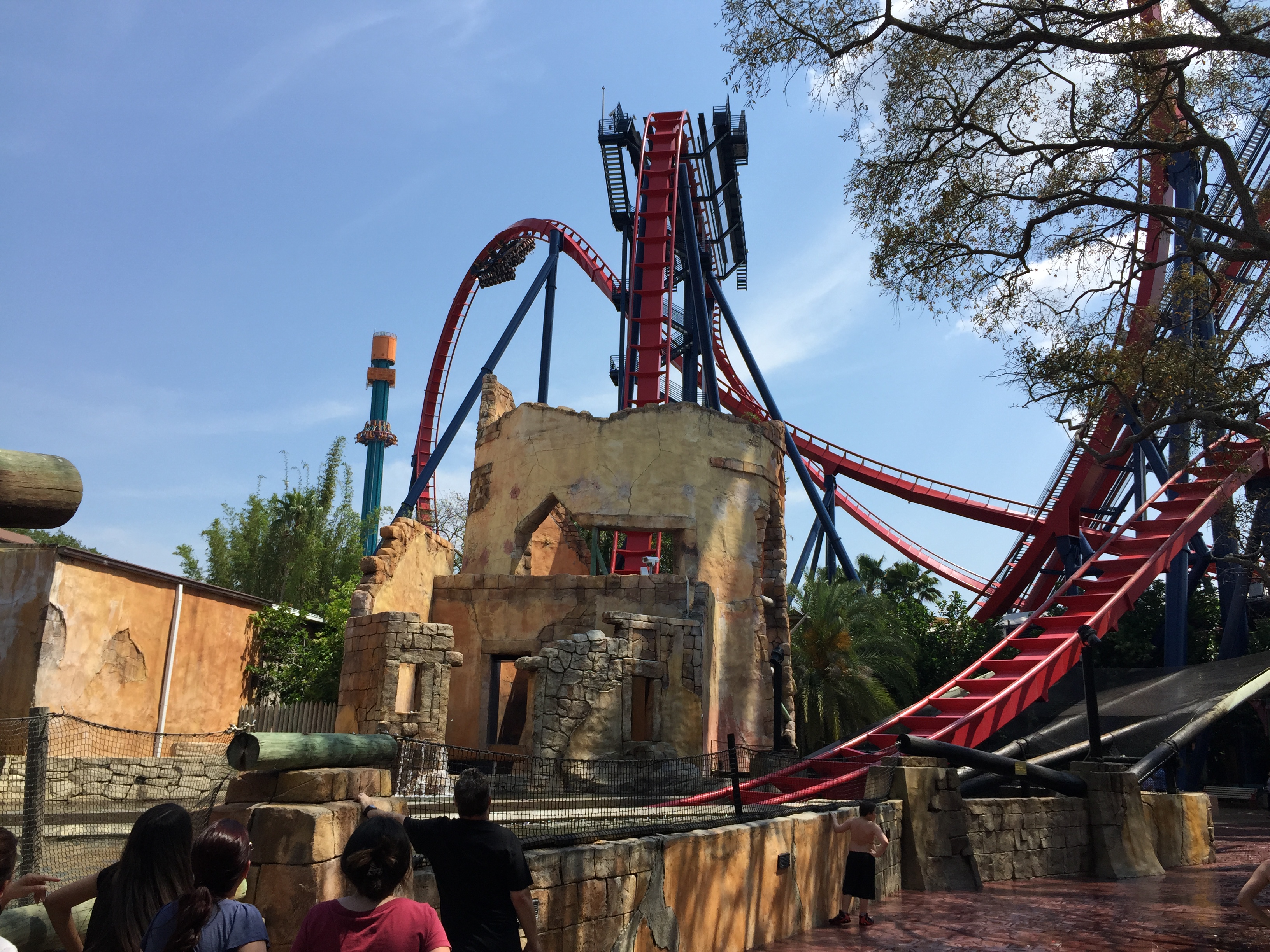 SheiKra–I really liked Griffon in Virginia. It hasdthe drop, a couple inversions, the splashdown, and even some airtime, which is notably absent at the end of Sheikra. But this coaster has the theming. And I really liked it. Our first ride was in the very front of the coaster. The first drop holding brake is as amazing as ever. I like these types of coasters, but wish they did more. This one was very well done, and the theming, especially after the second drop and at the end of the ride was very well done. Not quite Griffon, but very good indeed.

Busch Gardens Tampa has one coaster that is very notorious for being pretty stellar. Actually, they have at least 2, but one really put their makers on the map, and that was the coaster I’d most been interested in riding, from the first time I saw it over 20 years ago. Kumba, here we come.

Kumba–No overhyped coaster here. The setting is gorgeous. Love how they dug out trenches for the elements of the ride. And it looks brand spanking new. Rides that way too. Very good first drop and loop, but even though I’ve done the ‘cookie cutter’ layout of drop/loop/immelman/0G Roll/Etc., this one felt different. First, it is very loud. Second, it is very intense. The Zero G Roll was amazing. The cobra roll was great. It’s just an all around solid coaster in a great environment. I’m not a huge inversion fan, but this could be my favorite sit down looping coaster. 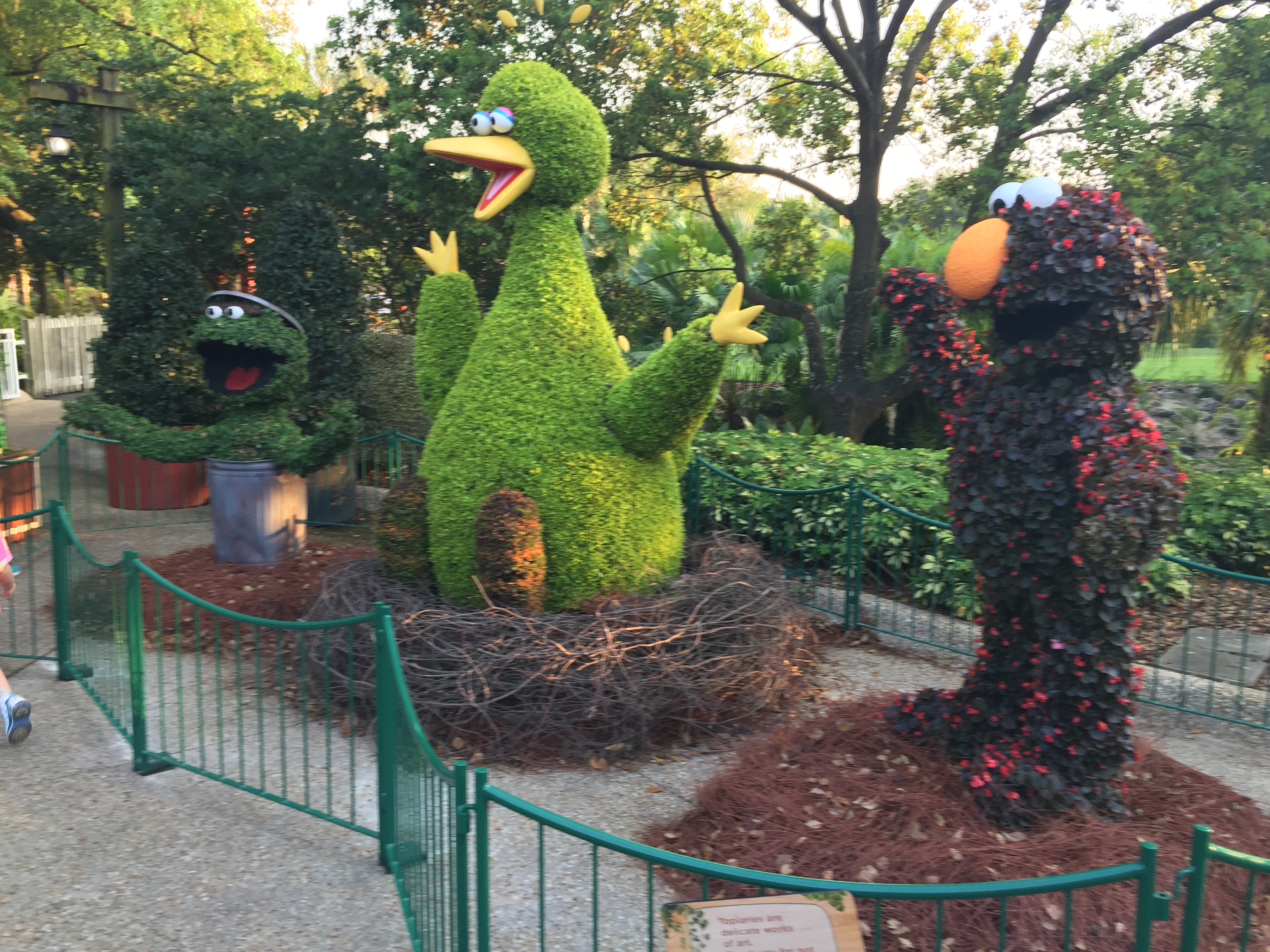 So we headed thru some more flowers and animals and then over to the newest ride, Falcon’s Fury. I’m very afraid of drop towers, but this one uses a newer restraint that I’ve tried before and wasn’t nearly as scared. But, this drop tower is one of a kind, besides being tall at a whopping 355 feet (currently fifth tallest in the world).

Falcon’s Fury–Not only is this thing tall (and it IS tall), but it’s the only one at the time of my writing this that takes your seat and rotates your seat out so that you’re facing the ground at a 90* angle. Yes. It does that. And it does it well. The wait was about 30 minutes, but totally worth it. I loved the seat and restraint. But didn’t know how it would be facing straight down. Not long after boarding, we were raising up. I was a little nervous. We got up top and…much to my surprise, although thrilling, I wasn’t terrified of rotating the seats to the 90* view. In fact, I rather enjoyed it. And that drop. THAT DROP. Is. Amazing. This is probably my favorite new drop tower. I can’t get over how awesome it was. More of these need to be built.

Afterward we went and rode the park’s stock mouse coaster, Sand Serpent. It had a line, but was a lot of fun. Wild Mice still scare me, but I always ride them. Then we went for the park’s classic Schwarzkopf coaster, Scorpion. 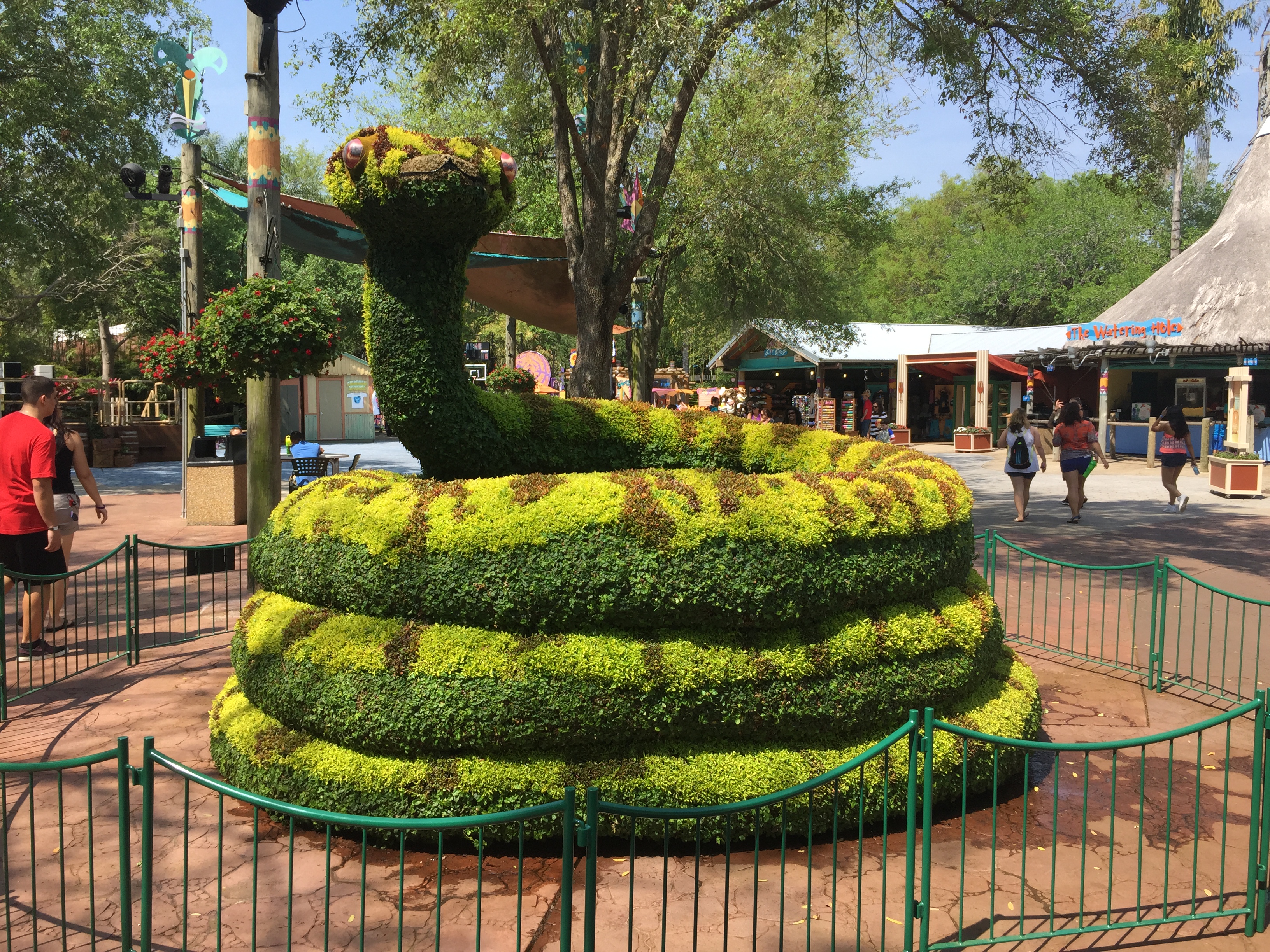 Scorpion–This coaster is a classic. Lots of fun with an inversion, some positive and negative g forces, and laterals. All with only a simple lap bar. Scorpion has a great first drop with an intense loop and some figure 8 turns. It’s a lot of fun, and I wish there were still more of these at parks. I just wish the line wasn’t so long, but it only runs 1 train.

The area of the park has been re-done for Falcon’s Fury and looks amazing. The colors are bright and vibrant, and it had a great feel to it. Up next we headed over to watch the show where a cheetah runs at 40mph, but the trainer talked a good 30 minutes without these beautiful cats running, so we gave up and walked away. Earlier we watched the elephant interaction, which was very well done. Then we headed to a coaster that in my opinion is underrated.

Cheetah Hunt–I’d heard about this. During construction it looked kinda cool, but not what was expected. Obviously I’d rather have just a lap bar or at least soft shoulder restraints. My vest came down very tight during the ride. But I’d heard it was rather meh, and I wanted to try it out. I’m so glad I had low expectations! The launch out of the station was meh, but after that, the ride was really good. Up into the ‘tree’ there was airtime. Great drop off. Several other launches. An inversion for good measure, and scenery and theming. There were some nice pops of air to this thing, and i was impressed. It wasn’t Maverick. It was more like Verbolten in a sense, but more aggressive. I really liked it! Should have rode it more. 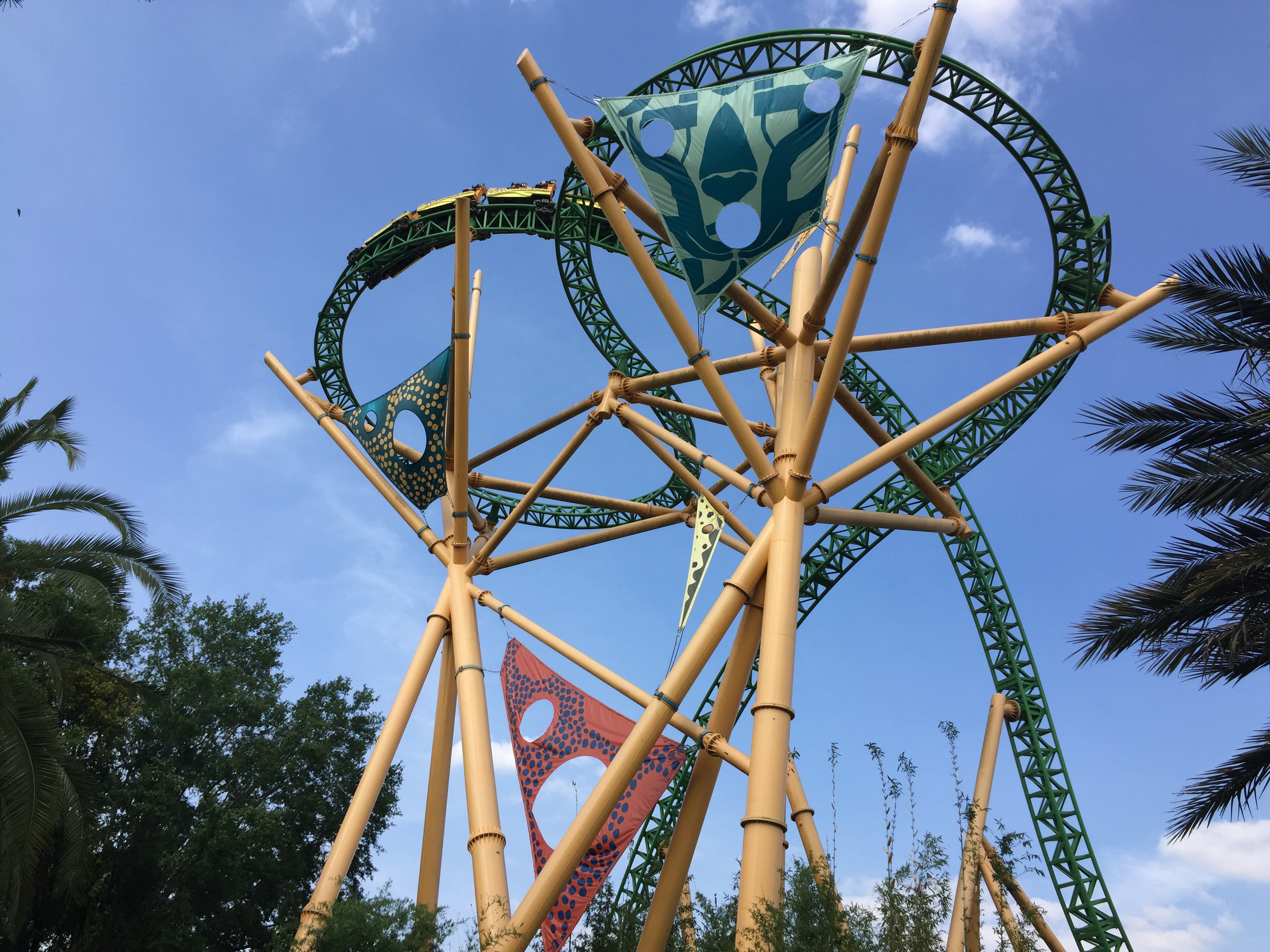 After that we were tired. Before hand, we stopped at the nice big house with a restaurant and bar for Rob to get his drink on, and after we were kinda tired. We weren’t ready to leave yet, though, and so we headed to another coaster that gets very good reviews.

Montu–This ride looks amazing. The theming is again, top notch. And it’s probably close to being my new favorite invert, though it may have to settle for number 2. I really liked the drawn out first drop. The inversions were well paced, and the theming was well done and made for some serious head and feet choppers. I like all the trenches you fly thru. This really makes the coaster. Month is solid. Very solid. I should have rode it more, but it was also intense.

So Rob and I headed out for a bite before heading back to the park for a bit. When we returned, we did the log flume, which was fun and wet, another round of Falcon’s Fury, and then finished on Sheikra. I really liked Busch Gardens Tampa. I’m definitely going to go back sooner rather than later. It’s a beautiful park with a solid line up of coasters. Too bad it’s 10 hours south.