I had gone back and forth on what day I wanted to drive out to L.A. and visit some parks. After checking on line everyone said that it would be a busy week, especially the weekend. I was going to go on Sunday and meet up with someone, but they weren’t feeling well, so I pushed it back to Monday hoping it wouldn’t be as busy. I woke up and headed out from Vegas around 6 AM. I stopped for gas and a Red Bull and actually made it to Knott’s Berry Farm around 10:30 AM, and that was with traffic. I also passed by 2 overturned vehicles and two tire blowouts on the way.

Going in to the parking lot I flashed my Platinum Pass at the gate to park and headed to the front entrance. It didn’t look to be too busy at this point and I was only planning on staying at Knott’s for about 2 hours. Unfortunately, my pass wouldn’t scan at the front gate so I had to get a comp ticket, but that didn’t take very long. Once inside, I was reminded of how much I loved Knott’s Berry Farm. It’s such a charming, clean, and beautiful park. I headed over to my first credit. At this point, the midways were all but abandoned. There were people there, but not a lot.

Sierra Sidewinder–I wasn’t really looking at this as more than a quick credit. Both trains were running, but they were only loading one, and the wait was maybe 6 or 7 minutes. I sat facing backwards in the front car by myself, with 2 larger guys sitting in the same car facing forward. I REALLY liked this ride! I was surprised at how well I liked it. The first curved drop was great and it has some fun laterals, a bit of airtime, and great spinning action. Everyone on the ride seemed to enjoy it as well. I went in not expecting much, but this was actually a really fun ride, and a great way to start my day. 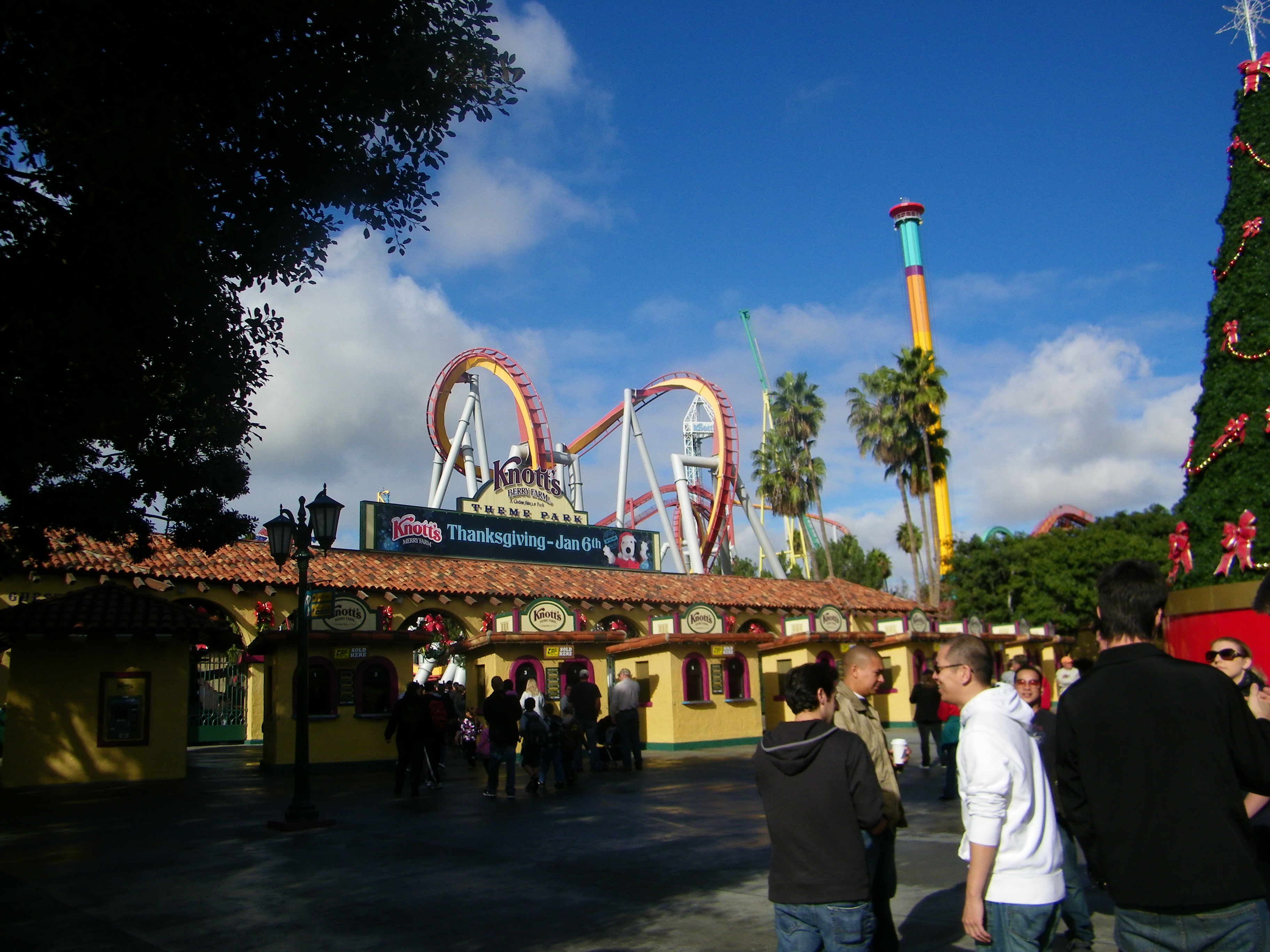 Silver Bullet–Many people didn’t care for this ride according to reviews online, but I loved it. I sat in the front row, the best place on any inverted coaster. The drop was still really good, and the layout was a lot of fun, with odd airtime on an inverted coaster, and strong laterals thru the helix. I loved the overbanked turn, and like that the layout is different from most other B&M inverts. Plus the setting is quite nice as well. And yes, it was still my 2nd favorite inverted coaster.

I walked back thru the park with my camera out. I was going to ride the Log Flume, but didn’t feel like waiting once I saw the line. It probably wasn’t that long of a wait, but it was the longest line I saw all day. Instead, I went to ride one of the best coasters in southern California. On my last visit, I still wore Rx glasses to see. Obviously you can’t wear them on any ride at Knott’s, and without them I couldn’t see a thing. Now that I didn’t need to wear glasses anymore I could finally see while riding.

Xcelerator–They were only running one train, and there was no wait for anything but the front. I decided to ride in the back first. Xcelerator still packed a punch when launching, but I’d forgotten how great the overbanked turns on it were. After riding I ran right back around and waited for the front. I’m still not sure why Knott’s chose to group the whole first car into one queue. Everyone wanted to ride in the very front, so the 2nd row was going out empty. I missed my chance at riding with another single rider, so I had about a 20 minute wait for the front. Had I realized that, I would have jumped in the second seat, but oh well. It ate up some time, but little did I know my day would go well enough that I didn’t need to worry.

I toyed with riding MonteZooma and Jaguar, but figured I’d try on my way out. I wanted to ride Windseeker, but it was closed all day. I was trying to complete my full set of Windseekers. So I headed over to the only other credit I knew I could get that day, since I’m too tall for the kiddy coaster that I was too late for on my last visit.

Pony Express–I sat in the front. The restraints reminded me of a Disk-O, obviously as they’re made by the same manufacturer. The launch was fun and the layout, while basic, was really neat. You launch straight and then into a banked turn before flying over some hills, lateral fills turns, and finally a turn in tunnel. I got some decent airtime on the hill before the tunnel. It was a nice family ride, and I’m glad that Knott’s invested in some family rides, which seemed to be carrying over to 2013 as well.

I had never gotten the chance to experience the Mystery Lodge on my last visit, so I just caught that while walking by. It was a neat experience, but I didn’t realize that it and the pre-show were going to take so long. On the one had, I’m glad I finally got to see it, especially if it ever ends up on the chopping block and lets face it, how often do I get to Knott’s? But wish I’d have been able to see it on my first visit when I had tons of time to do everything. Oh well.

Because I didn’t know how my day would go, and because I’d waited for the front row of Xcelerator, and because I did Mystery Lodge, I skipped eating anything at the park and headed over to Ghostrider before heading out. With hindsight being 20/20, I know I could have ridden Jaguar and Monte, but I didn’t, and I don’t really regret that. I do regret not eating sooner, but I’ll get to that in the next trip report. Alas, I did head over to Ghostrider. Everyone says it sucked. They usually say that, but I loved it in 2005. I knew it  nearly stopped on the MCBR now. How would I like it?

GhostRider–I sat in the back of the train. The first drop was still really great. This was my first daytime ride ever. Honestly? I thought it was a killer ride. Even with the almost complete stop on the mid course, the second half was still out of control. I don’t know if I just caught it on a good (great?) day, or if I’m just weird, but I loved my ride. I didn’t have a chance for a second ride, and maybe that’s good, but thus far, I still really like Ghostrider.

So I headed out. The morning had been beautiful. I was glad it was fairly dead at the park and that I didn’t need to buy a Fast Lane, which I was prepared to do. As I was leaving, it started to cloud up. I guess I left just in time, I know how notorious Knott’s is when it rains about shutting everything down and/or closing. All in all, I had a great 2.5 hour visit to one of my favorite parks. Too bad its across the country!