My last visit to this park was the spring of my first year living in North Carolina, and I went during opening weekend  I hadn’t been back since, and I lived so much closer now.  Something always seemed to come up. So I decided on an impromptu trip to Atlanta in the middle of July since I hadn’t been to the park during the summer yet. Besides, I needed a coaster break. I left work at 4:30 PM on Friday the 13th. Traffic wasn’t bad for the most part, and I actually made it into Atlanta and down to Austell by 9:00 PM. I’d gotten a room close to the park. Normally I’d have stayed at the Hilton in Midtown, but they were full, as were the rest of the nicer hotels down town so I figured why not stay close to the park as that was the reason for the trip.

On Saturday morning I got up and headed over to the park a little after 10:00 AM. The forecast was for thunderstorms all day and it had rained the evening prior, but that morning I woke up to beautiful skies and hot temperatures. I was hoping the park wouldn’t be packed and that the chance for rain would keep people away. I don’t know if it worked or not, but even though the park was far from dead, wait times and crowds weren’t unbearable. My first stop in the park was my only new credit.

Dare Devil Dive–I headed over to Dare Devil Dive first because I was afraid the line would get too long. Thankfully it was maybe a 20 minute wait. First off, Kudos to the ride ops. The announcer was funny and engaging, and the girls working the train were fast and efficient.  I really liked the new train design with only lap bars.  That was much better than Mystery Mine’s OTSRs. The first drop was a beyond vertical drop and it was fun. I was surprised at how smooth the ride was. And how fun it was, too! The first inversion was smooth, there was some nice slightly floaty airtime on the course.  And the final inversion was slow and fun. Overall I was far more impressed than I expected to be. Now if they’d only put these restraints on all the other Eurofighters. 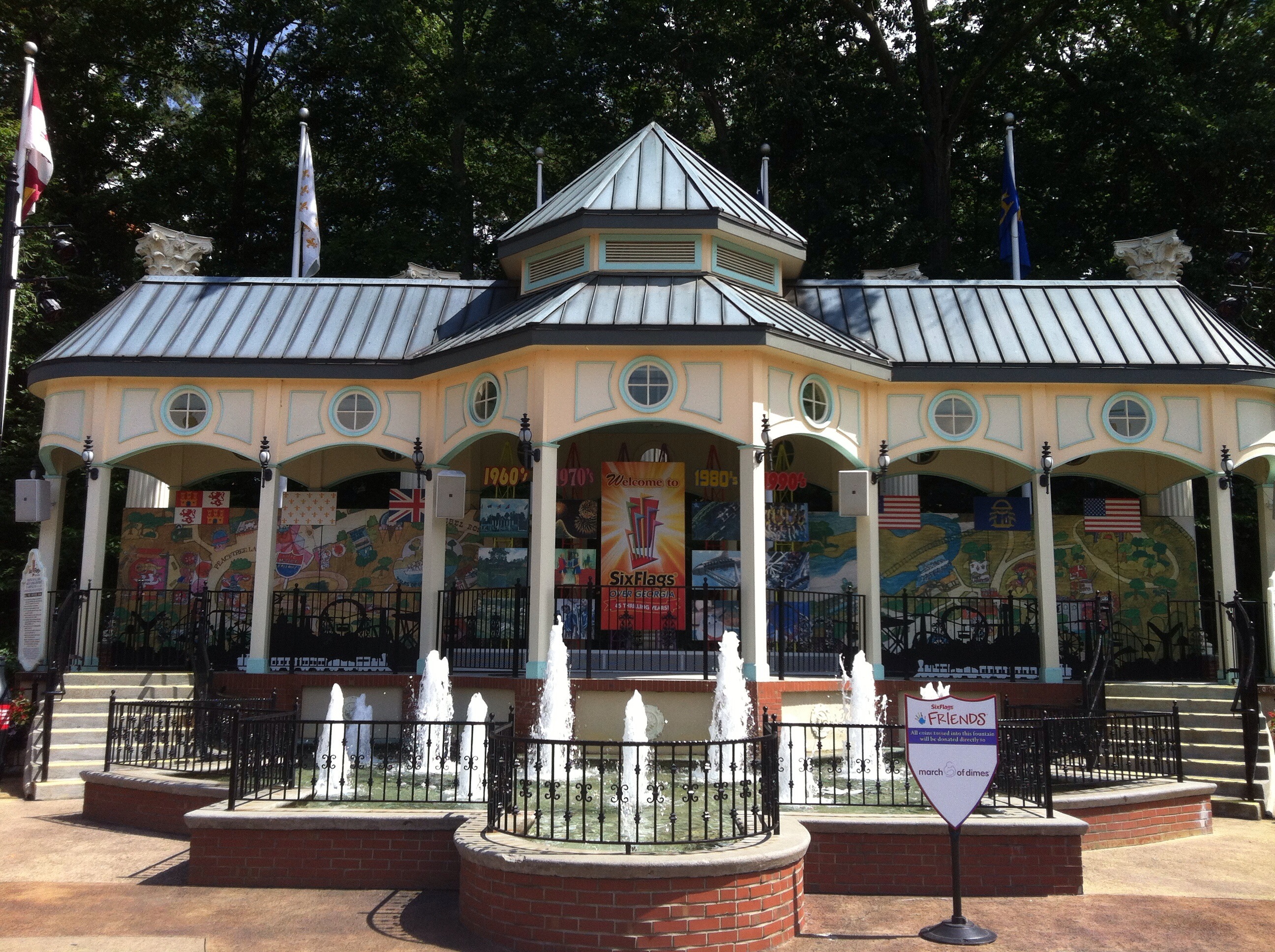 I headed into Gotham city next to ride Mind Bender. I love this park because it’s definitely one of the nicer Six Flags in the chain. And aside from Ninja’s theme, the rest of the park runs a fairly consistent theme in each of the different areas. This Gotham City was probably the best themed in the chain as well.

Next up I went to take a ride on Goliath. I headed over and the wait was about 20 or so minutes. I decided for a seat near the back  and ended up in the 2nd row from the very back.

Goliath–Goliath is consistent. The first drop is always great. I really love the ride, but having ridden an average of almost 1 B&M hyper per month for the past 5 months, I’d actually move Goliath just below Diamondback. But Goliath was always good. There was  nice amount of quality B&M airtime. The line moved fast, and this time it wasn’t raining.  I still loved the ride, and I’m glad to have returned to ride it again.

So I walked over to check out the line for Monster Mansion but I didn’t feel like waiting at that point. I ended up going over to the train station near Acrophobia and catching the train instead. I rode the train all the way around this time. I love trains in parks. Lunch was at Johnny Rockets before riding the Sky Buckets across the park. 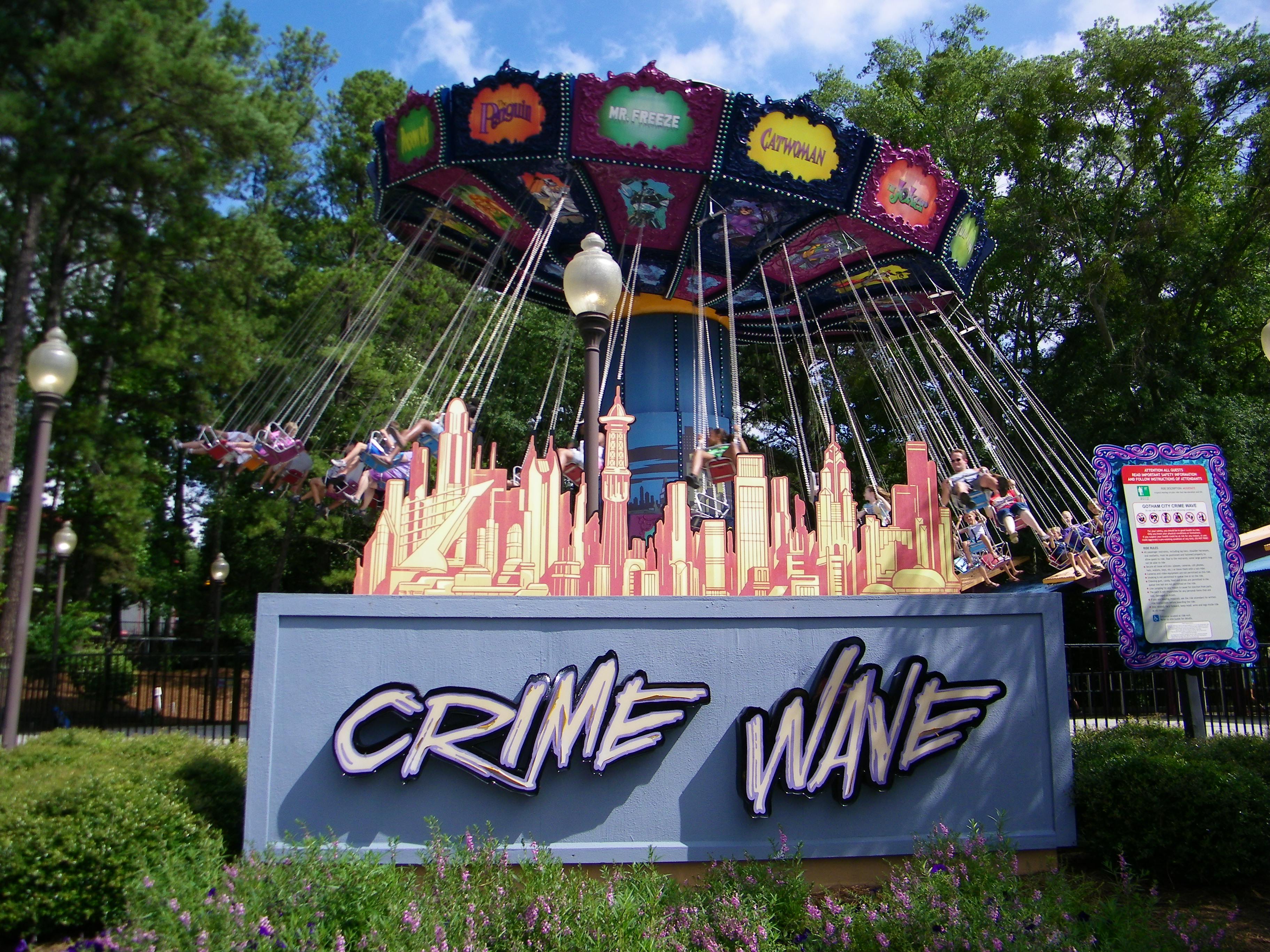 Once I arrived across the park I headed up to Great American Scream Machine. There was no line, and just a 3 train wait in the station. I headed to the back of the train for my ride.

Great American Scream Machine–This is one of the more underrated wooden coasters out there. The first thing I noticed was that they must have changed the padding on the seats and small seat divider because I fit better and it was more comfortable. This coaster really had some great airtime on the course, especially the ending. I could ride it all day, and wish I’d gotten some more rides on it.

I wanted to ride the rapids ride and Superman, so I decided to pay $4 for a locker bracelet. This was new, and actually a good value. You pay $4 for a wristband that gets you 2 hours at each locker you use. I put everything in the locker and got in line for Superman.

Superman Ultimate Flight–When the sign says 30 minutes, you better count on 60 or more. The line was short, but the wait was incredibly long and made worse by an annoying kid that didn’t realize that I was ignoring him for an hour. Anyways. I rode near the back of the train. I much preferred the ride on the B&M flying coasters to Vekoma. The first drop was great. The pretzel loop was intense and amazing. Twisting and turning above the ground smoothly is an experience you just don’t get with any other type of coaster.

Since everything I had was in the locker, I headed over to Thunder River next. The line was about 30 minutes, but it was worth it.  Its one of the better landscaped and themed river rides I’d been on. And I got pretty wet. The setting was very nice. After I was soaked I decided to head over to the other side of the park and watch the Illuminate show in the Crystal Pistol Theater. The show was decent, but they need a proper theater.

For the rest of the day I rode the kiddie coaster, mine train coaster, and Cyclone, along with re-rides on several rides. I headed out of the park for a bit to have a quick bite a Wendy’s near the park before coming back at nite for some nite time rides. Eventually I headed back to my hotel and then enjoyed a night on the town. I love Atlanta and Six Flags and always enjoy my visits to the park.