I tended to go to Holiwood Nites about ever other year. I’d went in 2008 for Timberliners debut, but that obviously never happened. But that’s okay. In fact, it was really okay in 2012. This was the best Holiwood Nites ever! For the 2008 and 2010 events weather was an issue. It was so hot. Miserably hot. In fact so hot that I spent most of the day on Saturday both years in the water park and then taking a nap before dinner. None of that this time, though!

With my job I wasn’t sure if I would be able to go so I never made rooming or flying arrangements since the skilled nursing facility I worked at was in the window for it’s yearly state survey, and I am not allowed to be off during that time. Instead I decided that if I go I would drive, and come up with sleeping arrangements later. The week before the event I messaged Bryan Bird to ask if I could potentially sleep in my car at his cabin and use the shower there, which he was fine with since I knew mostly everyone in the cabin already.

Since there was no survey the week of the event I left from my job on Thursday evening to my parent’s house for the nite. I left later than I had wanted to on Friday morning because I stopped by my old job and was there for quite a bit talking, but when I did leave it was raining outside and I had hoped that this wouldn’t cause me any major delays. As I drove closer and closer to Indiana, the rain came down harder and harder. Rob Ackerman texted me and said the rain ended around Louisville but that it was still overcast at Holiday World. There were 2 nasty wrecks on my way, but thankfully they were on the other side of I64 heading east, so I wasn’t affected. All of my worrying was for naught, though, as I made it well before the event started. That I forgot about the time change helped.

Having arrived in the area I stopped at Wendy’s since it was still several hours before dinner, then I headed to CVS to pick up some essentials, and finally made my way to the liquor store near the park for more essentials. Since it was so early I headed over to the hotel to visit with Kris and Eric. Bill and Jill were there too and eventually Matt and Mark showed up.

Once everyone was there we headed over to the cabin. Bryan had let me know that I could stay in the cabin for Friday nite since someone had to cancel and Saturday was up in the air so I was happy that I at least got one nite in the cabin. Once we headed over and met up with everyone I drove over to the park to register. Thankfully they let you into the park early so we immediately headed back for a ride on The Voyage.

Voyage–I knew about all of the track work and the major redo of the turn around. I’d never had ‘bad’ rides on Voyage, but it had always just been so intense that I can only ride it a few times before needing a break. In 2010 towards the end of the nite I hit a stride and rode it maybe 6 times in a row, but that was way out of the norm. This would be my only day time ride for the year and I really wanted to see how the ride was tracking. Oh My! It was like a new coaster. The turn around, usually so intense that I needed the mid course brake just to breathe, was by far smoother and more tolerable. It was outstanding. The rest of the ride was great too. I can tell that there needs to be a little bit of track work once you get to the hill going over the station and back to the final brake run, but the ride was so awesome that I didn’t want to get off.

After our ride we walked up to the picnic pavilion for the official start of Holiwood Nites. They did a skit with Dan and Pat Koch as a Ghost Buster and the Stay Puff Marshmallow Man, then someone went over the rules, and after a bit we were all off. I wanted to go ride Raven first so I headed with a group there.

Raven–I’m only going to do one breakdown of this ride. My first ride was kind of ho-hum. Very smooth, but not that exciting. It wasn’t nite time yet, but the ride just wasn’t giving me the airtime I knew it had. I like Raven, and even after all the rides, which eventually got better, I still liked Legend better. Even hill 5 wasn’t that powerful during the event. But it was running very smooth!

Legend was next and I was excited. I love Legend and hoped it would still be running as well as it had on previous visits.

Legend–Wow. I always love Legend. I swear it gets better every time I ride it. It was intense and fast. There were a few moments of great airtime throughout the course. Everyone seemed to agree for the most part that it was running insane. I’d almost go visit the park just to ride Legend. It had some amazing forces, some “Oh My!” moments, and lots of laterals.

Once we got off of Legend we went to eat some pizza and fudge. The café was kind of packed, but that’s okay. There was plenty of pizza, Pepsi, and fudge to go around. I visited with friends, met some new ones, and hung out a bit before we made our way to The Voyage. I rode in the back. At nite, this thing was a beast. It takes no prisoners. It was so smooth and intense, gave major airtime on the first few amazing hills, and the third drop on the triple down is my 2 favorite element on a wooden coaster.

Some of us kind of came to the conclusion that aside from the obvious, the track work having been done, that we were also benefitting from the fact that the temperatures were mild and it wasn’t humid, so no one was overly exhausted for our Voyage rides. All I know was this was the best time I’d ever had at Holiwood Nites. Rob and I headed over to Legend for a bit. We ended up getting a train all to ourselves, so we rode a couple of times in the very back before heading up to Raven for a bit, and then back to Voyage. Eventually the nite came to a close so I drove Eric & Kris back to the hotel before finding my way back to the cabins where the party had already started.

Water park ERT was in the plans for the next morning, but it was too cold and I was too sleepy. We all did get up around 11 AM drove in to Dale to eat at Denny’s where I had a bad allergy attack and couldn’t stop sneezing. I had taken meds, but they weren’t working very well. Once we got back we hung out at the cabin for a bit and then went to the park. I wanted to do the walk-back tours of the coasters, so I split off and went with Kyle, Ethan, Craig and his kids. The walk-back was actually interesting. There was not much on the Legend/Raven tour, but the Voyage tour was really nice. I’m glad I packed my comfy shoes. 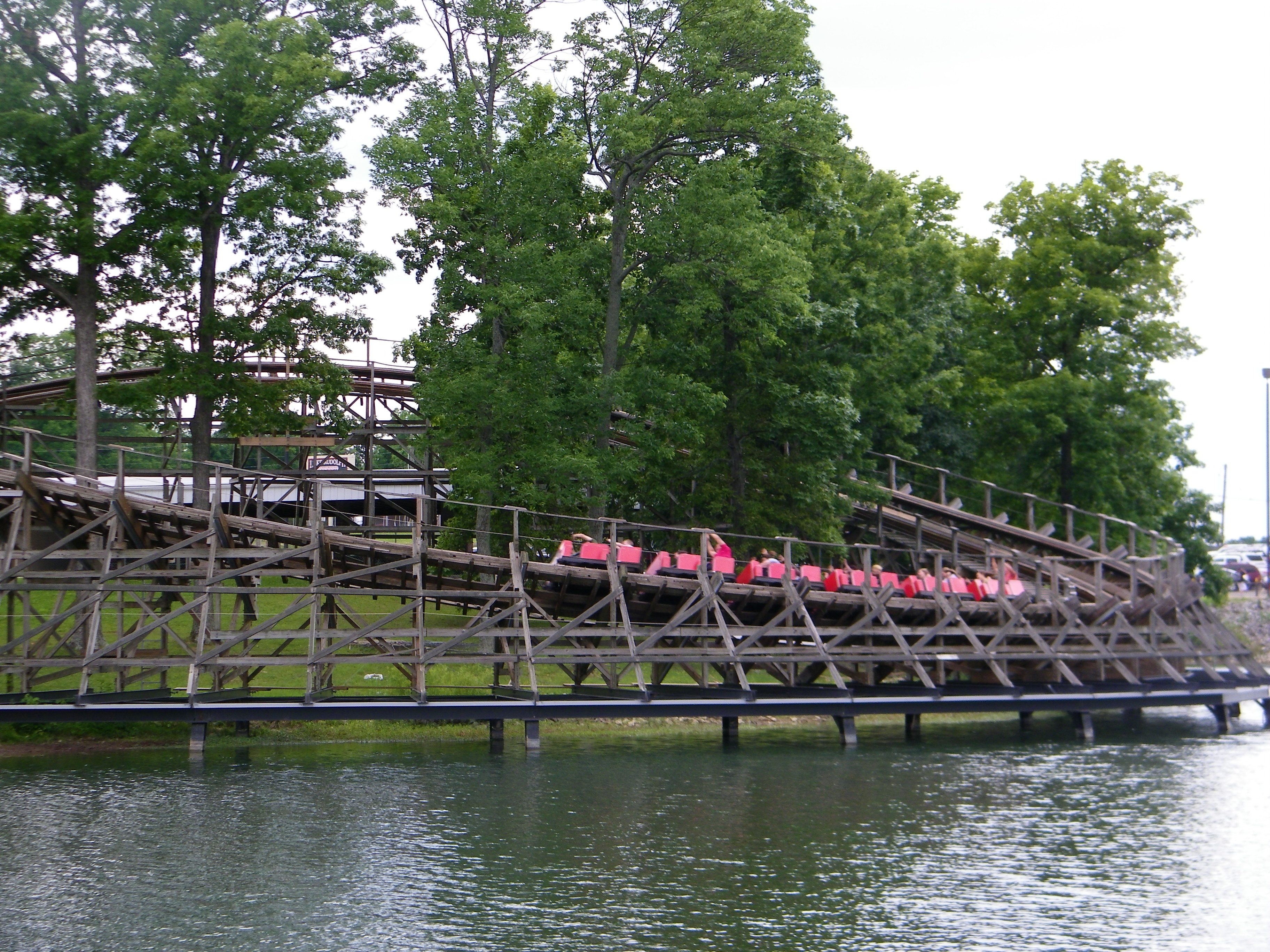 Wanting to ride Pilgrim’s Plunge I headed there next but it was down for a bit so I hooked up with Bryan and Stuart for Gobbler Getaway instead. Kyle ended up riding with us too. My turkey caller wasn’t working well so I only scored 60 points. Boo! After that we walked back up and went to ride the Sparkler, the park’s new sky swing ride. It was short, but boy was it unnerving! I liked it. Then we hurried over for a shot at Liberty Launch. The shorter S&S towers are far better, with much more pronounced airtime.

After that we all went back to the cabin for a bit. Once back in the park I stopped for ice cream and then arrived at dinner as it was being served. The pork BBQ was quite good, but for the love of all that is right, Holiday World can we get mayo AND Miracle Whip? They are not the same thing and burgers really are better with onions and mayo in my book. Thanks! But dinner was good and fun as always as we sat around and talked geek.

As ERT started I headed first to Voyage. There were a few Legend and Raven rides early on, but it was all about Voyage. At one point, though, Mother Nature decided to sprinkle some magic on the tracks as it began to rain. Voyage was super intense at that point. Granted, I couldn’t marathon as much as I had the nite before, but the speed amazing. The ride was ridiculous, the rain hurt, but it was all worth it. The ERT for the weekend was epic. I’m sad because I doubt it’d ever be that good again though one can always hope it’s cool and sprinkles in the future too. I got another couple of rides on Legend and for the 2nd time in a row, ended the nite on Raven. It was running much better.

When ERT came to a close we stood at the entrance and talked to Paula, Dan, and others for a bit before heading back to the cabin. The person whose spot I took on Friday didn’t get to come at all, so I got to stay in the cabin a 2nd nite too. I was actually in bed and asleep by 1:30 AM. The next morning we all got up, got ready, said goodbye to everyone else and separately headed out. Some of the group went camping. Some went home. But me and a few others headed to Ohio for my first Kings Island trip since 2004. Holiwood Nites 2012 was really a fun event. It wasn’t crowded, the ERT was great, and the weather was perfect. And dancing in the Raven station to Donna Summer was fun. Thanks to everyone at Holiday World who always makes a fun weekend spectacular!