I’d been watching with much anticipation as Busch Gardens Williamsburg announced and started construction on Big Bad Wolf’s replacement. Would it be just as good? What would it be? When Verbolten was announced I thought it looked really interesting. My original plan was to go ride Verbolten on opening weekend, but since Matt didn’t want to go that weekend I changed it to the following weekend. Matt decided not to go that weekend either, so I made plans for BuschGardens on Saturday and Kings Dominion on Sunday.

Then, of course, a week before opening, Matt decided to go. But he wanted to go opening weekend, and I already had plans. So he wasn’t going. Then he was again. So finally, the week of, I made reservations for Friday and Saturday nite in Richmond. Leaving on Friday of Memorial Day weekend was rough at first since everyone was heading to Charlotte. Traffic was a mess for about 20 miles, but then lightened up. I made my way north in about 5 hours. Matt showed up around 11 PM. I wanted to go to the diner beside the motel for a late dinner, but they closed at 11 PM. What diner by a motel closes at 11 on a holiday weekend?!?! We swung by Burger King instead before heading back to the room where I was fast asleep about an hour later.

Waking up early Saturday morning to beat the rush and get breakfast, we headed out to Busch Garden. We were anticipating lite to mild crowds, but you never know. Breakfast was at a McDonald’s about 20 minutes from the park and eventually we made our way to the parking lot where we met up with Chuck, who decided to come down for Verbolten as well, a surprise to me. 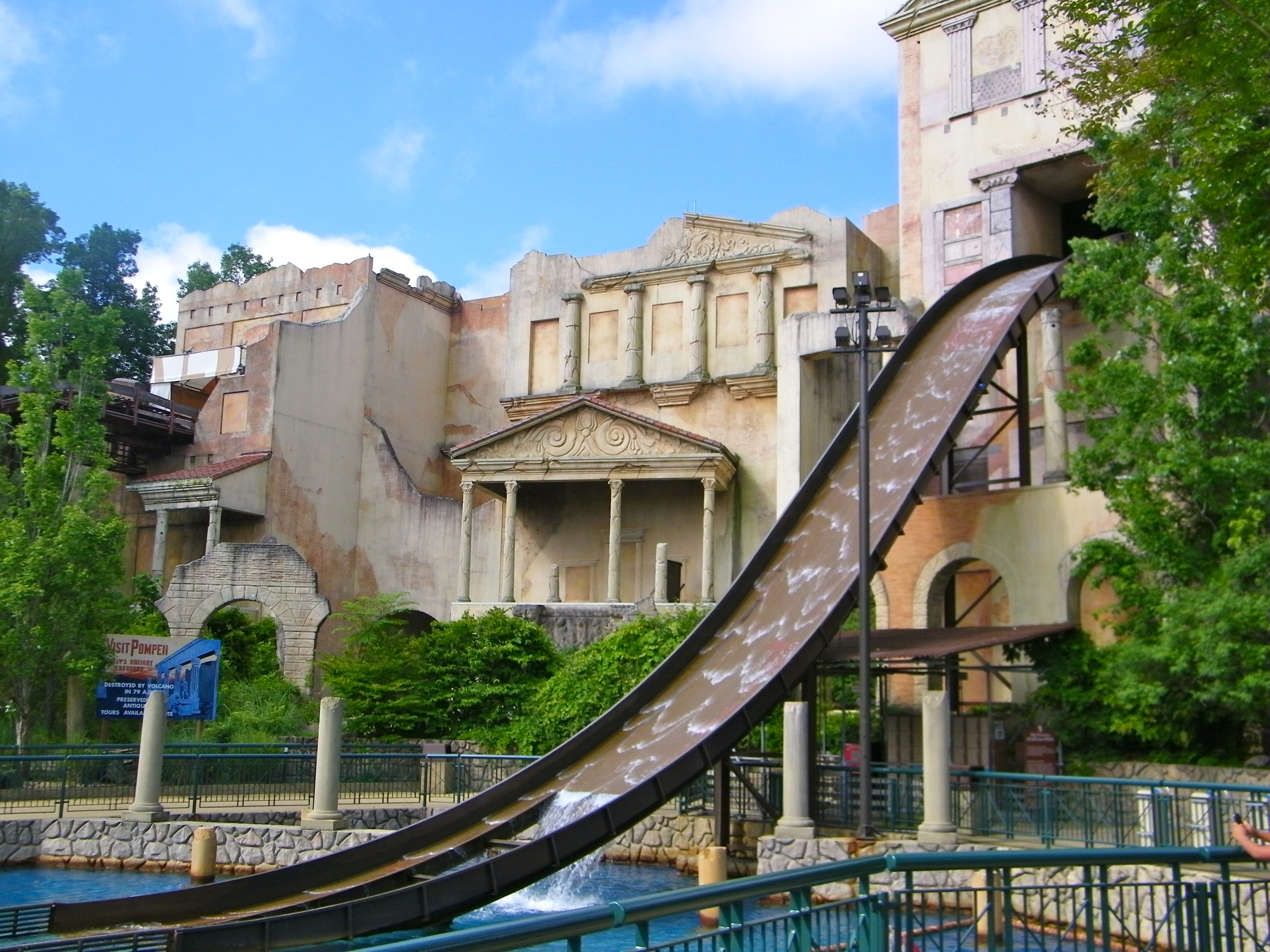 It wasn’t looking to be extremely busy at this point. I must say, Busch Garden’s season pass processing was great. I purchased online, Matt did not. But you go to an ATM like machine, hit a couple buttons if you have to purchase one or scan your ticket if you purchased online, and viola! Then you scan it at the front gate and scan your index finger. Quick and easy, and we were on our way to Italy to wait for the ropes to drop at 10:00 AM.

We waited by Escape from Pompeii for the ropes to drop and scurried over to the bridge that leads into Germany to get in the line to get in the queue for Verbolten. When they opened it up, people flooded in. The wait was maybe 15 minutes, including the time it took to walk straight thru the queue. The queue and station were all nicely themed.

Verbolten–Chuck and I ended up in the back seat of the orange train. You head out of the station and into some S curves that lead thru the trees and then to the launch section that launches you into the Black Forest building. The launch was more powerful than I’d expected. Once inside there were some tight turns and fun drops, interspersed with black light theming thru the black forest. There were three different scenarios that take place in the building. We got ‘Spirit of the Forest’, which ended up with the spirit talking to you just before the vertical track drop element. I have to say, the track drop in the building was a lot more fun than I expected. Then there was a hill that drops you out of the building and then into the 2nd launch. You hop up to the ‘old bridge’ where you crawl to an almost stop, before plunging down to the river and then back up thru the trees, hitting a non airtime producing hill on the way, then a turn, and then you hit the brakes. 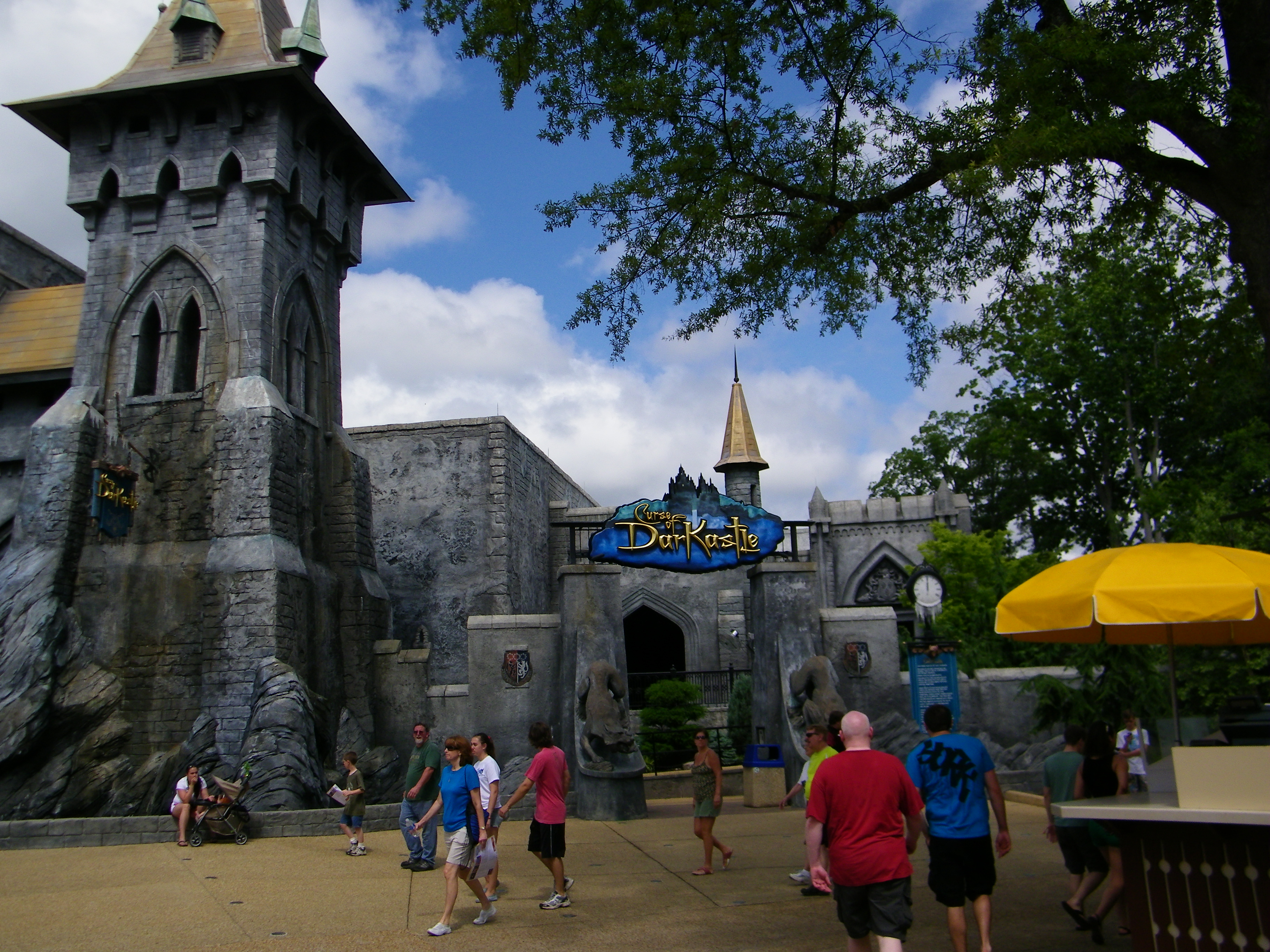 Verbolten was fun. Definitely a family ride, and something that could be completely reridable. I wish there was more theming on the outside portion of the ride, though. Also, I think the audio would have been better if it were on board. I couldn’t make out what the spirit of the forest was saying. But the vertical drop was well utilized and really fun.

Matt rode after Chuck and I and got the Wolf scenario in Verbolten’s show building. We walked over to Mach Tower next. Mach Tower was just okay. I’m still freaked out by drop towers, but this one was kind of meh. Next up was DarKastle, a walk on. This was my first time riding since I’d had Lazik surgery. I wish they’d gotten the upgraded projectors and better audio that was added to Spiderman at IoA, but otherwise, I loved that ride. Maybe more than Spiderman, even. Next we walked over to France to get our Griff-on. Chuck hadn’t ridden it yet, so we got in line for the front. The wait wasn’t very long.

Griffon–I rode in the front middle part of the train. Griffon goes up its steep lift fairly quickly, but then slows to a crawl at the top. Of course, then you’re subjected to the holding brake at the drop. This freaks me out in the front of the train, just hanging over a nearly vertical drop. It’s quite intense. Then you drop, face first, then up into the inversion, turn, and into the mid-course brake. After crawling thru the brake and dropping its another inversion. Griffon actually gives you some decent airtime on the last few hills. We immediately ran around and rode it again in the back of the train, where the airtime was more pronounced. 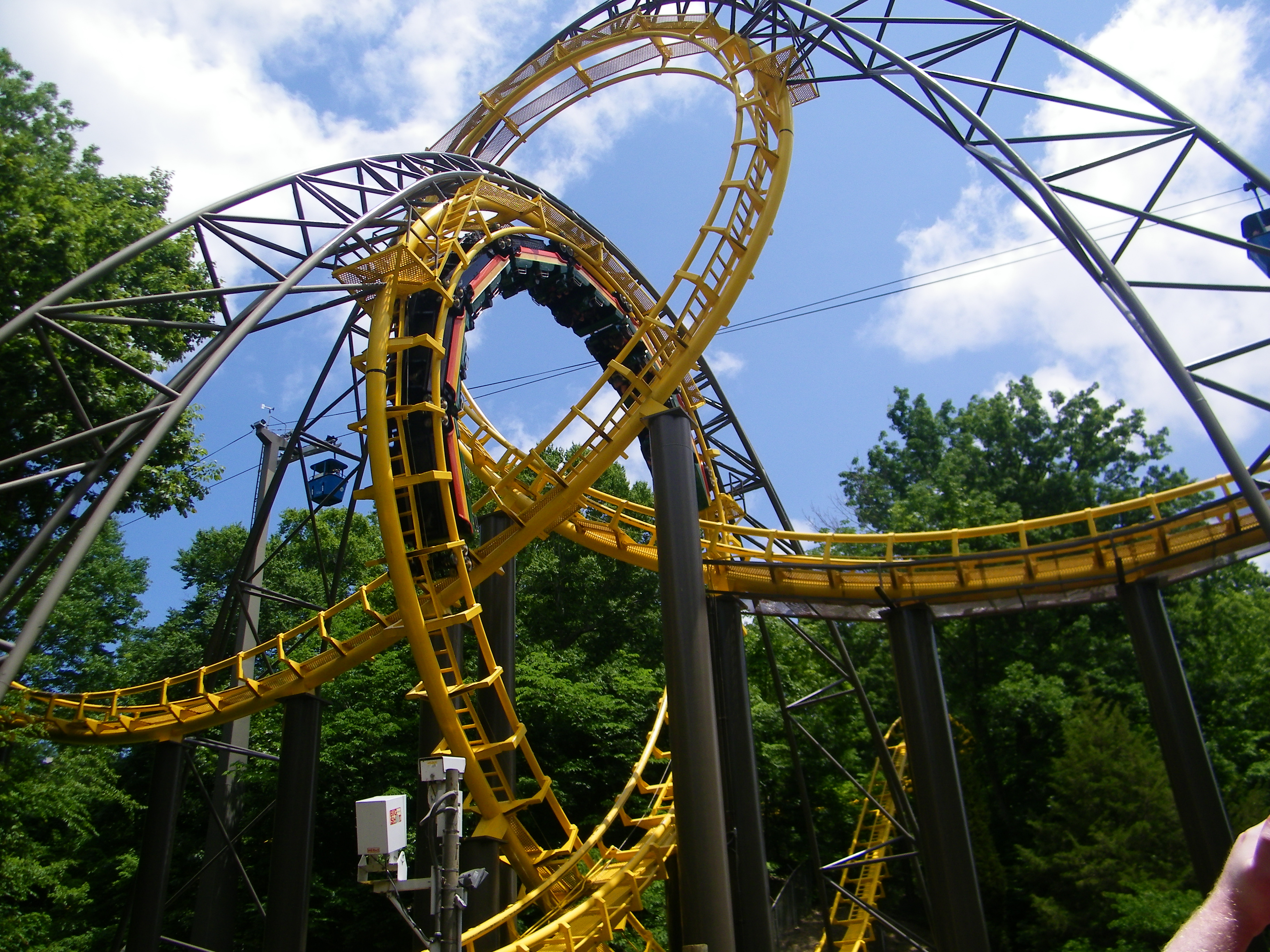 Continuing through France, we headed over to Alpengeist, which was nearly a walk-on. This large scale inverted coaster has gotten a bad rap for being ‘too big’, but I liked it.

Alpengeist–I don’t get why people think it’s not intense enough. I love the first drop and inversions afterwards. Granted, they’re all pretty large, but I don’t need to feel like my feet are being pulled off every time I go thru an inversion. Still, I don’t think that makes it weak by comparison. Alpengeist has a nice surrounding, and even with complaints that it fizzles out in the end, I think it’s a really fun, solid ride.

Heading over to Le Scoot next, we got in line for the flume. It was fun, and we all got soaked. Thankfully I was careful with my phone and camera. They got wet, but not damaged. We ended up in Ireland next. Matt and Chuck toyed with getting food, and I was hungry, but I wanted something more. We rode Europe from the Air, which was filled with way too many pre-shows and basically was a poor man’s Soarin’, a ride which I find completely boring. Besides, Chuck had been to most of the places we ‘flew’ over. So we headed back over to Germany via the Sky Ride to get some food.

We toyed with riding Loch Ness Monster, but went across the river instead to Festhaus. I spent $36 on food (Ribs, chicken, mac-n-cheese, potatoes, cake, beer, water, and a pickle). But Busch Gardens has always had good food, though the baby back ribs were tough. The show at Festhaus wasn’t that great, but the beer was. After eating, we walked out and toyed with another Verbolten ride but the line was extremely long. 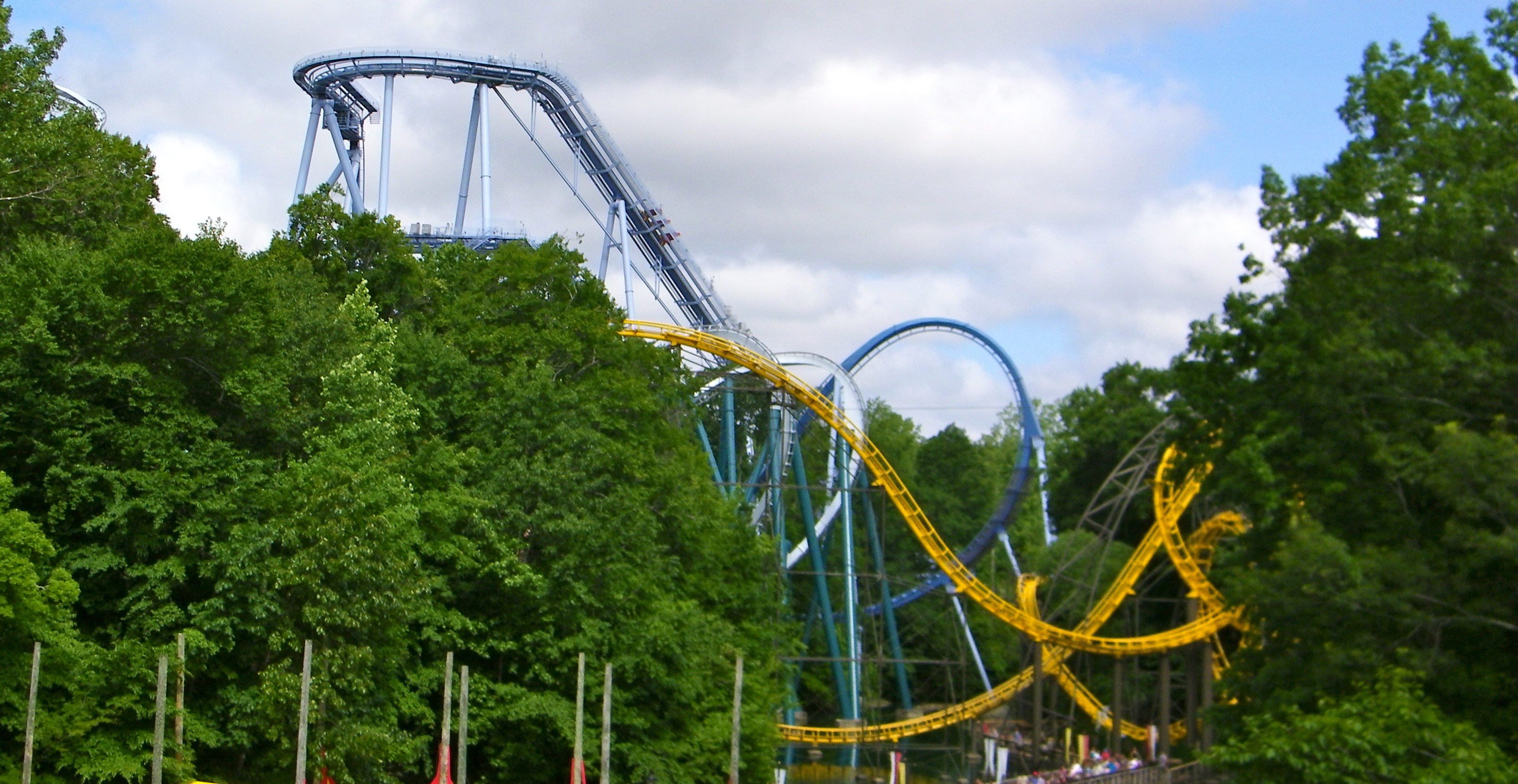 Instead we walked over to Italy to ride Apollo, the ride that everyone tells me is great, but that I just didn’t love on my last visit. When we got to the entrance I was taking my camera from around my neck to put in my cargo shorts when the ride’s entrance attendant jumped on me and told me I had to put it in a locker, to which I responded that I was putting it in my pocket. She told me it wouldn’t fit, and that it would mess with the restraints. I didn’t want to be a coaster geek, but she was being rude, and I told her I’d ridden every thing else with it in my pocket, and I wasn’t renting a locker just to put my camera in when I knew it could fit in my pocket. She then said as long as she didn’t see the camera, I should be good to go. Seriously? Every other attendant was fine with me putting it in my cargo pocket. My camera really wasn’t that big to begin with. Thankfully Apollo had no line.

Apollo’s Chariot–It was better. But still not great. We rode in the very back, and yes, there was airtime, but I just didn’t ‘get’ Apollo. The first drop is okay, the first airtime hill has B&M floaty air, but that’s it till you get to the end. We got off and went back around and rode again. It was still good, but nothing outstanding. Better than my last time.

After riding Apollo we did end up getting a locker to put all of our stuff in, but only because we wanted to ride the water rides. These were the only really long lines we waited in all day. So we first rode Roman Rapids, where I ended up getting hit with every waterfall. Next we went over to ride Escape from Pompeii, which had a long line, and again we got pretty wet. I still loved the corny show in the show building. Next up Chuck and I got our credit on the kiddy coaster, Grover’s Alpine Express. It was fun. Then we rode the sky ride again over to finally ride Loch Ness Monster. 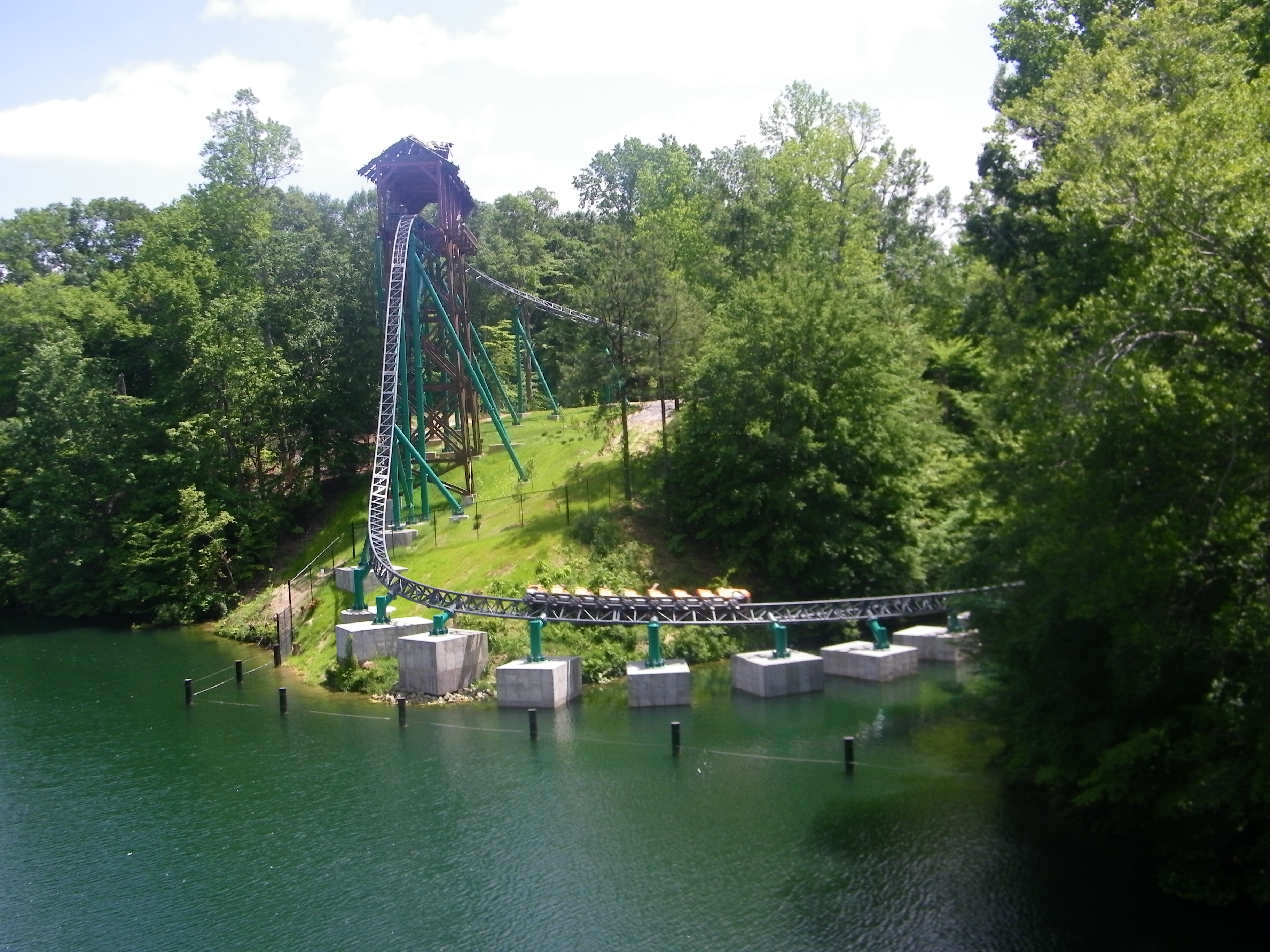 Loch Ness Monster–Classic Arrow. The loops, drops, and turns wqere all fun. It seemed like the helix in the tunnel took forever. I really wish they’d light the monster up in there again. I’d love to see it. You get some decent air on the ride, and the setting is very unique.

Another ride on Le Scoot was next before riding the sky ride back to Italy. We got another quick ride on Apollo, and this time it really was a lot better. I sat in the very last seat on the far left, and there were parts that took me by surprise. I immediately liked it better after that. We got our stuff from our lockers, made a bathroom stop, and I got another beer. Then we walked back over towards Verbolten, but Chuck decided to head out. I think we took the sky ride again. Once we got to Verbolten it was down. We waited in line for around 30 or 40 minutes as we sat on a rock wall, but it never came back up, and eventually the line was shut down for the nite.

So we took a train ride around the park and ended up eating at the Irish sandwich stand before riding the Sky Ride around and finally ending up in Italy. Griffon was down, Verbolten was down. We walked past Alpengeist, but didn’t ride. So we ended our nite on Apollo. It was better at nite where we got 2 back rides, one front ride, and a 2 row ride.

Busch Gardens was lovely. We walked to the front of the park as I took plenty of photos. I really enjoyed our day. The food, the beer, the rides all come together to make it a special park that doesn’t feel over run by children and teens. Maybe now that I had a season pass, I could head back in the fall.