Monday morning sure seemed a lot like Sunday morning. We headed out early from the Crowne Plaza and drove to Six Flags Great Adventure. I really had nothing on the agenda today other than to try and ride Kingda Ka as it was down the entire day when I was at the park last year. We arrived just after opening. I saw Ka testing, so I was excited. We headed into the park and met up with Ken over by Ka, but unfortunately the ride was down once we arrived. There wasn’t much of a line, but they had the queue closed off.

So we waited. We stood in the shade by the ride’s entrance. Monday was a little warmer than the rest of the weekend, but it was still nice with a breeze. After waiting maybe 15 minutes the ride opened and started launching riders. All three of us got in line for the front row, and since Matt and I rode together first when we got off I was able to just switch to the right side of the train and ride with Ken. I had wanted to ride this to compare it to Top Thrill Dragster since it opened. Dragster is a fun ride and only has a lap bar, but Ka had shoulder harnesses. I was adamant when the ride was built that they wouldn’t make much difference, but people had complained ever since. Now I saw why.

Kingda Ka–The launch was no different from Dragster’s launch, but the shoulder restraints felt terrible as you’re launched forward and up the top-hat. The actual ascent feels much the same as Dragster, and going over the top I never felt the magnetic brakes slow us down on the way over. It was interesting to ride this one without having glasses on and being able to see. The downward spiral really hurt my shoulders both times that I rode, and the hill afterwards was more pain, less fun. I was glad it was over the first time, and even happier it was over the 2nd time. I don’t see me riding this many times on future visits.

The section of the park that Ka is in was very nice. I loved the bamboo and the theming all over. After we got off the ride we headed over to El Toro, one of my favorite coasters ever. Once you get into the Fiesta section where Toro is, it’s a completely different theme, but still done very well. I wish they would give each section of the park a makeover like they had here and in the Golden Kingdom. We queued up for Toro, which had a very short line.

El Toro–Yep, still amazing. And it wasn’t even running in top form. Rode in the very back, and it still throws you over the first drop, which is amazing. The violent ejector air on the next two hills was great, then you pop up into the turn around, float over another 2 hills, turn, and then the most amazing thing happens as you fly over Rolling Thunder’s tracks. It feels like you’re going to get launched 100 feet in the air just before the restraint catches you and the train pulls you back down. I love it. The 2nd half is all twisty and turny, and is loads of fun at that speed. I love El Toro. I look forward to more parks building something like it.

Next up it was time to get our inversion on so we headed over to Bizarro, the 2nd coaster I’d ridden with that name in the last 3 days. I stopped a few times to get some pictures of El Toro, and then Bizarro as well. We were greeted with a fairly short line.

Bizarro–The audio in our row didn’t work, but that’s okay. The first drop on this coaster was fun, and the loop very smooth. Coming down off of the dive loop, the fire cannons went off and the airtime in the Zero G roll was great. I’m not a huge fan of the cobra roll on here because it’s a bit too intense for me, so I was glad to pop up into the brakes for a second. After that its twist, dive, 2 corkscrews around the Auger of Doom (with mist!) and you’re done. Sorry, it’s a fun ride, but Bizarro is not number one.

After taking a quick break while taking more pictures before we headed over to the fort. Matt wanted to ride the mine train so we headed there next. I saw a guy with a West Virginia shirt getting in line for the sky ride. We’re everywhere.

Runaway Mine Train–It’s a fun ride, but nothing to gush over. It does afford nice views of other coasters, though. The first helix drop is fun; there are some nice pops of light airtime on the course, and then the one good hill on the lake. Its fun, but not something I’d stand in line for.

We were going to take the sky ride over to the other side of the park but the line was too long so we walked instead. Ken and Matt told me about a few rides that had been taken out here and there on this side, which was nice and shady, but could use a lot of work. There were empty pads everywhere, and the section where Chiller was is now just closed off. There is lots of wasted space, sadly, in a park that could use more rides and more capacity. Thankfully the lines weren’t bad. We got to Nitro, which had about a 20 minute wait.

Nitro–I loved Nitro the previous year, and it was even more fun on this trip. It was running crazy. The first drop still ha nice airtime going down, and it seemed as though every hill had airtime. I grayed out on the helix, something I don’t often do. There was plenty of airtime on the hills going out, and the last 3 bunny hops didn’t disappoint. Nitro moved up a spot in my rankings. It was running very well.

Ken decided to head out for the day but Matt and I had time to kill before I had to be at the Philly airport, so we headed to KFC for lunch before going back to the park. We actually sat at KFC for a bit to relax in the air-conditioning. Once back to the park we headed over to Skull Mountain, the surprise hit from my last visit. Skull Mountain–We rode in the back, and this time the music and some theming was on. Skull Mountain is an aggressive ‘family’ ride and a lot of fun. The twists, turns, drops and speed make for an interesting ride. I really liked it with the music and everything that was working. I would have ridden again if the line wasn’t as long as it was.

Upon exiting the station, Matt pulled his iPhone out to check the time and messages. When we walked outside, some girl came up and said “Did you find that phone? Let me see your phone for a minute” and Matt said no, it was his phone. She then said “No, my husband just lost his phone and you have it, let me have your phone” and she went to grab Matt’s phone, as I repeated that it wasn’t her husband’s phone, and went to grab her hand to stop her from swiping Matt’s phone. I think she realized she wasn’t going to get the phone, so she turned around and yelled at her ‘husband’, who was standing over by a food stall (Talking on his phone, mind you) and she started yelling “Hey honey, did you find your phone?!” as he turned around and looked the other way, and started walking away. Freak.

So we headed over to The Dark Knight. The line wasn’t very long, and I always enjoyed it on my last visit. The preshow hadn’t changed, and I still like how they do the ‘graffiti’ in the preshow room. The Dark Knight-Still a lot of fun, and one of the more aggressive mice. We rode in the back of the car. I like that it has very quick theming and sounds as you’re traveling by. The ‘scare’ at the end is loud, but doesn’t really catch you after the first time. I think more parks should add something like this. Indoor mice are always a lot of fun.

We headed back over towards Nitro, but Matt wanted to ride the rapids, so we put our stuff in a locker and headed over. The line wasn’t long at all, so we almost walked on as there was very minimal wait. Got a bit wet, but not drenched. The rapids were okay, I’ve been on better, but I tend to compare everything to the rapids at California Adventure, and nothing compares.

We got another quick ride on Nitro, which was running just as amazing the 2nd time. I love that ride so much. Still, though, I like Intimidator just a tad better. Once we finished we headed over to the Giant Wheel, which I didn’t get to do the last time. I wish I hadn’t left my camera in the car, because there were ample opportunities for pictures, had I had a decent zoom, instead of just my iPhone (which takes decent pictures for a camera phone). 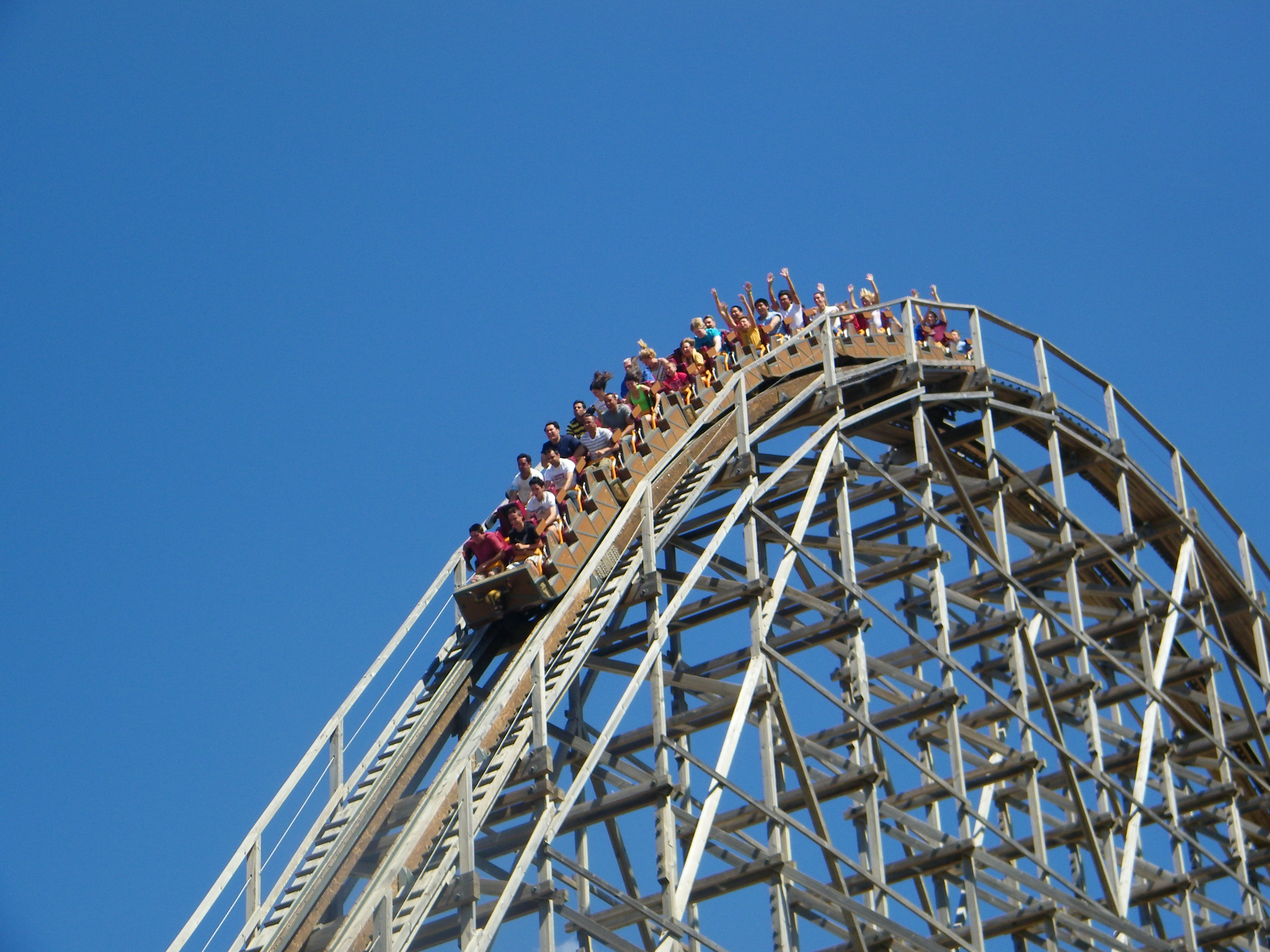 We walked back over to El Toro for one last shot on it, and again, it was an amazing ride in the back. We were going to get 2 rides, but had to leave and head towards the airport. I had a really great day at Great Adventure, so that’s 2 for 2 as far as I’m concerned. I haven’t had terrible lines or customer service when I’ve been there.

We left and headed towards Philadelphia. This was my first time seeing the city, and eventually I want to spend some time there. Matt dropped me off and I headed in to the airport to print my boarding pass. Thankfully I can always check in on my phone. The Philly airport was kind of massive. I had dinner and a frozen mocha drink. The plane ride was only an hour, and because of the turbulence, we didn’t really get any drink service, but that’s okay. I was tired when I finally got home at 11:30, but headed off to sleep soon, ready to go back to work after a holiday weekend.