I was invited to go on my first construction tour, so with my new camera strapped around my neck, a sore throat, and some comfortable walking shoes ( I headed to my new home park early on a Saturday morning to meet up with a bunch of other salivating coaster geeks. As soon as I’d gotten out of the car I saw Jonathan Hawkins, who I hadn’t seen in person since 2008. We chatted till we got to the back gate and then ran into a bunch of other people, some I recognized, some I didn’t.

We stood around for a while as Max, the Assistant ACE Rep for the region, and the park got things together, and then we headed in to the park. There were a lot of really important things going on with Carowinds for 2010 so we got a good overview of everything new. Our first ‘destination’ was a walk behind Carolina Cyclone.  It was sporting a new paint job for 2010, its 30th year at the park. I wasn’t a fan of the new color scheme but it was definitely in need of some painting.

Bart, the new-ish General Manager, likes slim trees and line of sight to the rides, Dani said, so some trees had sadly been removed, and some had been thinned down, and some new thin trees had been planted in new areas. As we walked from the back of the park to the new Planet Snoopy section much work was being done with painting, landscaping, construction, destruction (they just cut Sponge Bob off of the fountain recently) and more going on. Everyone in the park was very busy. 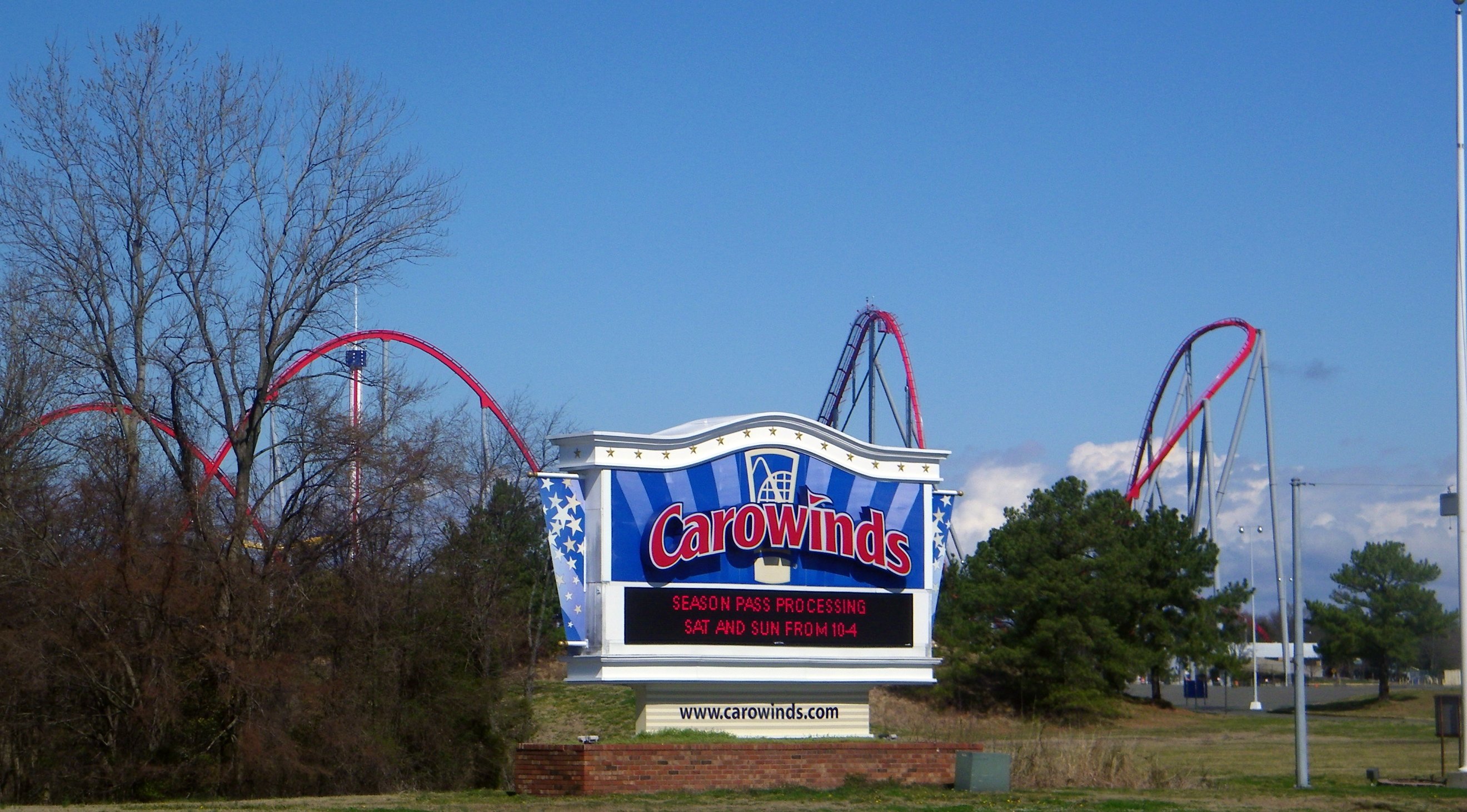 As we arrived at Planet Snoopy you could immediately tell that the newly renamed Flying Ace Aerial Chase, the park’s Vekoma Jr. SLC, had gotten a new paint scheme of yellow and orange. Many people complained but I actually like it just as good as the original colors.  We arrived in the area as they were preparing to put Snoopy’s center piece on the Red Barron ride. All of the rides looked different, and although there was still painting going on, many new banners were up and lots of Snoopy and the Peanuts Gang are everywhere.

We walked out by Afterburn’s batwing and the park’s south gate, which Dani said was getting some attention and would look very nice. By this point, though, it was all about Intimidator. We were by the turnaround and all of the coaster geeks were busy taking pictures as we made our way down a maintenance road that follows right beside the track and has amazing views of the entire ride. We were informed that grass would be planted under the ride, so no parking lot coaster for Carowinds.

We walked the service road all the way up to the picnic area underneath and beside Intimidator. Dani pointed out that they did order LOTS more trash cans, which were still shrink wrapped and under the shelters. We took pictures of the helix area and then headed over to the Season Pass processing center, which had been ‘moved’ outside of the park. Actually, they just moved the park boundaries so that you could get your pass processed without having to go in the park, which was a good thing. We also learned that the Gold Passes had just came in and were picked up and rushed from the airport that morning due to an ordering mishap. 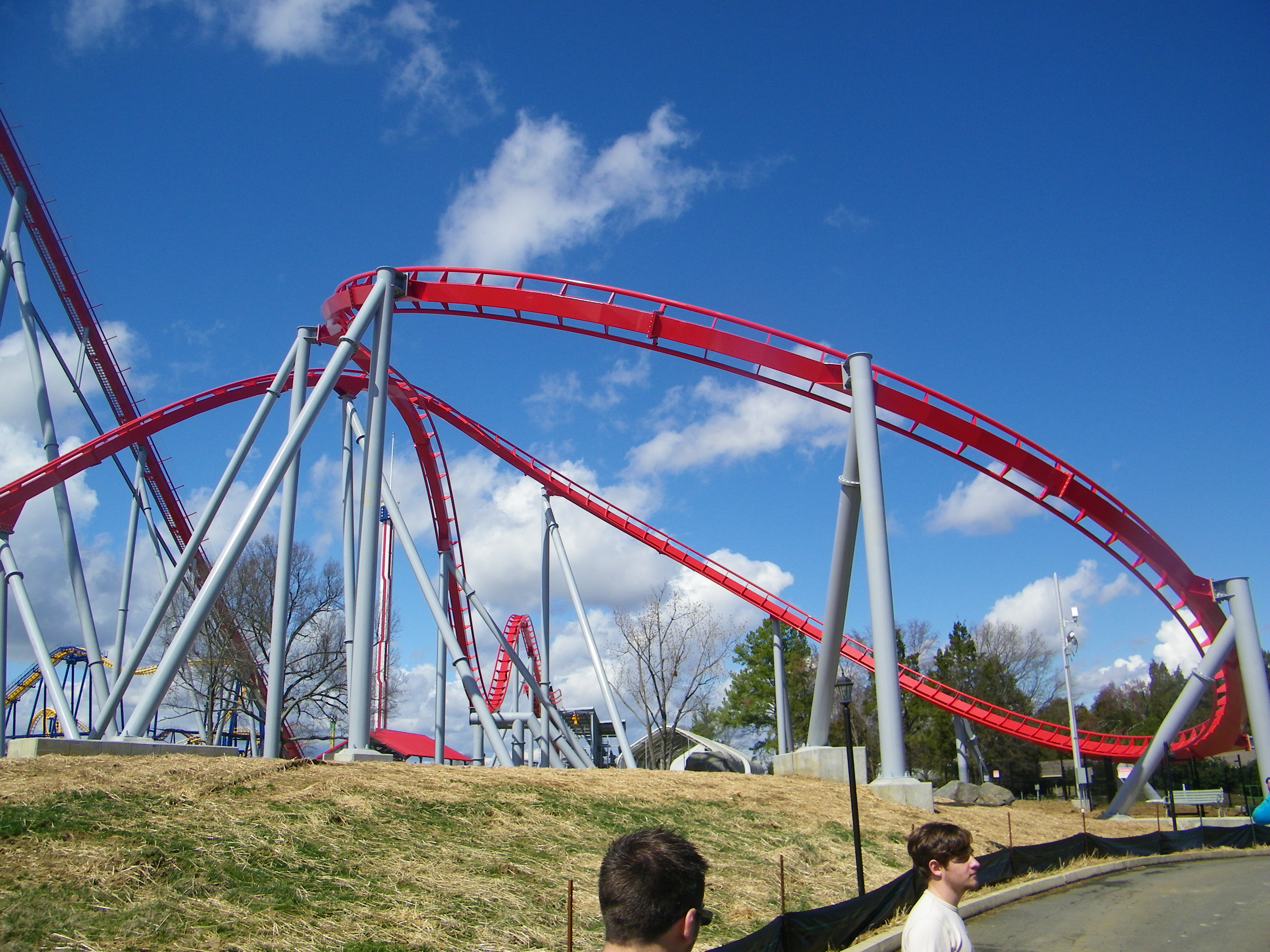 Dani, who had just ridden Intimidator the previous Wednesday, swore that the trims didn’t kill the ride. We walked around the front plaza of the park and over to Intimidator’s entrance plaza that, while not quite finished, looked very nice.  The big  grassy area beside it also looked nice and ready for something to be added.

This whole area had its asphalt removed and pavers put down, which was something the park planed to complete throughout the entire park in the next 5 years. It looked very nice. The operations team for Intimidator was on lunch so no action shots this early, but we were told that it would be around 1:30 before it started to test. Other rides in the park were testing, but we wanted to see the new toy so Dani said we could either leave and come back, or leave and watch at 1:30 from the mall across the street, or she could make the tour really long for those that wanted to stay. I opted to stay.

We walked around the park by Vortex and the Scrambler and then around to the back so that those wishing to could leave. After about a 15 minute break we headed over to the water park, where many slides were getting repainted. But one of the main reasons we went back there was to take a look at Thunder Road’s turn around, which had some major work done to the turn around. Dani stated it would be opening with the park this year, and that there was still some work to be done, but it should be completed in the next five years. 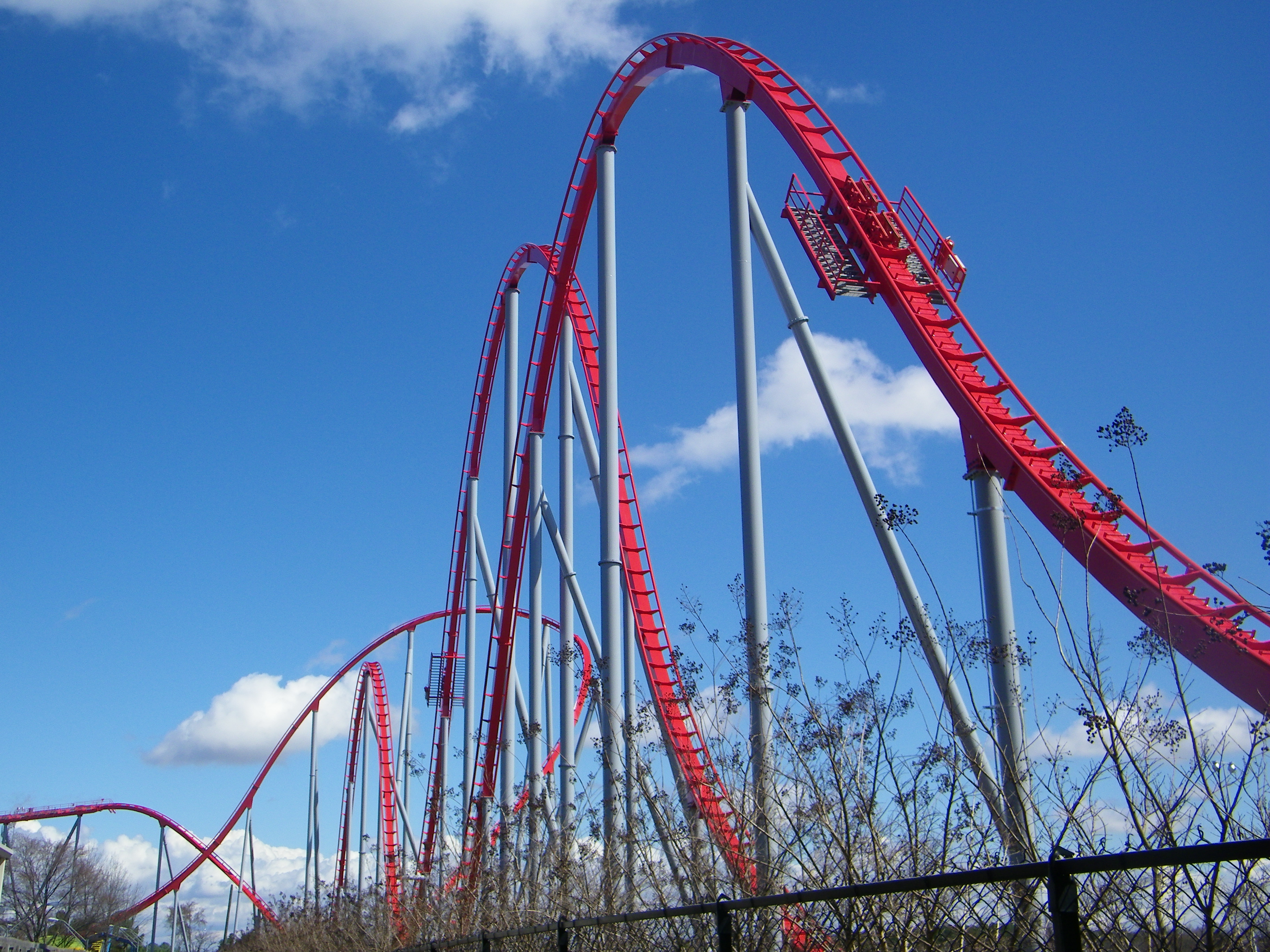 We walked thru the water park and talked about a lot of different things. Some how the suggestion to put Vodka in the lazy river came up, and I said to Dani that in all seriousness, they should consider having an Adults Only nite during the summer for adults and have DJs, bands, and what not. She said that the park actually had some serious discussions about doing an adult nite, and that they’d talked about it often  This would be something I think would be really good.

Earlier, as we came around to the Palladium I asked if there were any plans for Weird Al since he was on tour to come back, and she said no. At this point they were working on some non-religious concerts, but so far had nothing. We then walked by the former Scooby Doo dark ride where all signage had been taken down and nothing new put up yet. Dani said that it has been completely re-done inside and that it’s really amazing. I was looking forward to trying this out when I get to Carowinds. We walked back thru more of Planet Snoopy. The Red Barron planes had had the centerpiece installed by this point.

New signage was up for a lot of the rides, and the Balloon Race had been repainted. The Character Carousel wasn’t completed yet, if I recall correctly, but everything was looking very Snoopy. I guess they had some extra blue left over because they painted their falling star and the kiddy coaster blue. We stood near the car ride and waited until Intimidator finally began to run. It ran for quite some time and everyone was taking pictures. Eventually we moved to another section of the park to get more pictures. 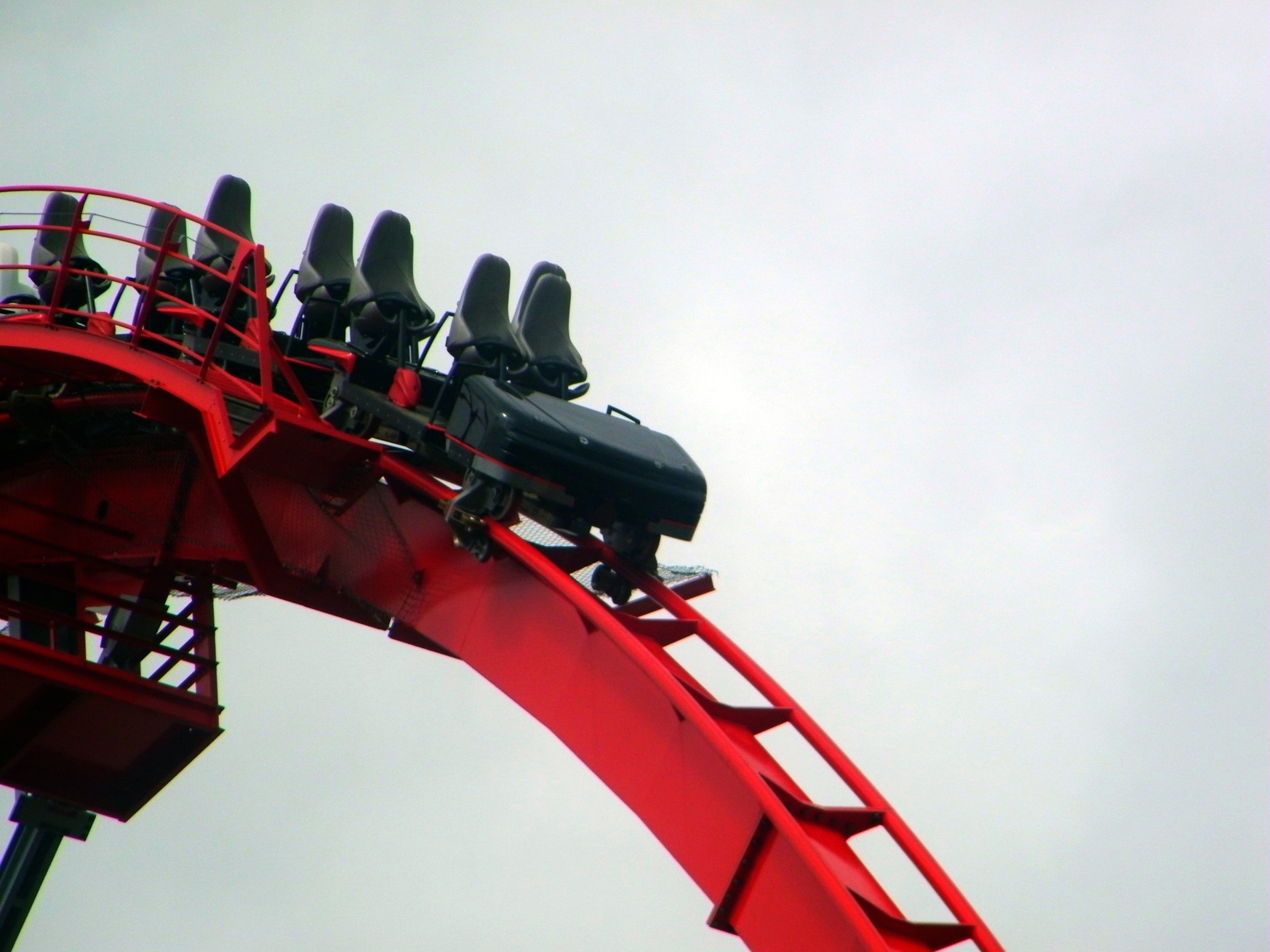 Some of the things Dani talked about were the de-Nicking of the park. Nickelodeon had the rights to anything they wanted, and they did take the character costumes but not much else. The Sponge Bob fountain was cut off at the legs (so cruel) and that whole area was under construction whilst we were there. We talked about Snoopy recognition and yes, the parks thought of that too. Dani gave us her Peanunts Spiel but said she really didn’t have to use it as there was very little backlash.

Kings Island even took Snoopy around to the schools to ask kids of they knew who he was, and of course they did. They also asked if they could name Snoopy’s friends, and of course they could. She also talked about how Carowinds goes a few times a year with the costumed characters to the area children’s hospitals and entertains kids. I didn’t know that before hand, but that’s a pretty awesome thing. After a bit we headed back to the back of the park. I hated to see Dani go, especially since I had just met her in person, as she’d been a great PR person for the park, but she had the best reasons to go (marriage) and I wish her all the best. Now I can’t wait to get back to Carowinds and check out all the new stuff up close and personal. Intimidator, here I come!