Every March Six Flags over Georgia and the American Coaster Enthusiasts hold their annual Spring Fling event. I’d never been to the park and it was on my short list of weekend trips to visit soon, so that seemed like a great time to go. I requested Friday off and started making plans while sending in my money for the event, and making reservations, using Hotwire for the first (of now many, many) time(s).

As the date came closer and closer my plans changed significantly. Add in the fact that the weather was not cooperating and I ended up with a totally different trip than the one I had originally planned. So on Thursday March 26, 2009 I headed south to North Carolina to stay at my grandmother’s second home to help break up the trip. The fact that I’d been invited to Carowinds’ Media Preview Day by my then online, but eventually personal friend Max, who has now passed away, on Friday was another deciding factor for my stop over in Salisbury for the night.

On Friday I woke up in Salisbury and got ready. It was dreary outside, which was what the weather forecast called for all weekend. I made my way to Starbucks and then headed towards Charlotte. I was afraid I’d run into rush hour traffic, but instead cars were moving at a decent pace all the way down to Carowinds Blvd. I found my way to the employee entrance and parked, made a few last minute adjustments, and headed towards the park. This was a first as I’d never entered from behind the park before. 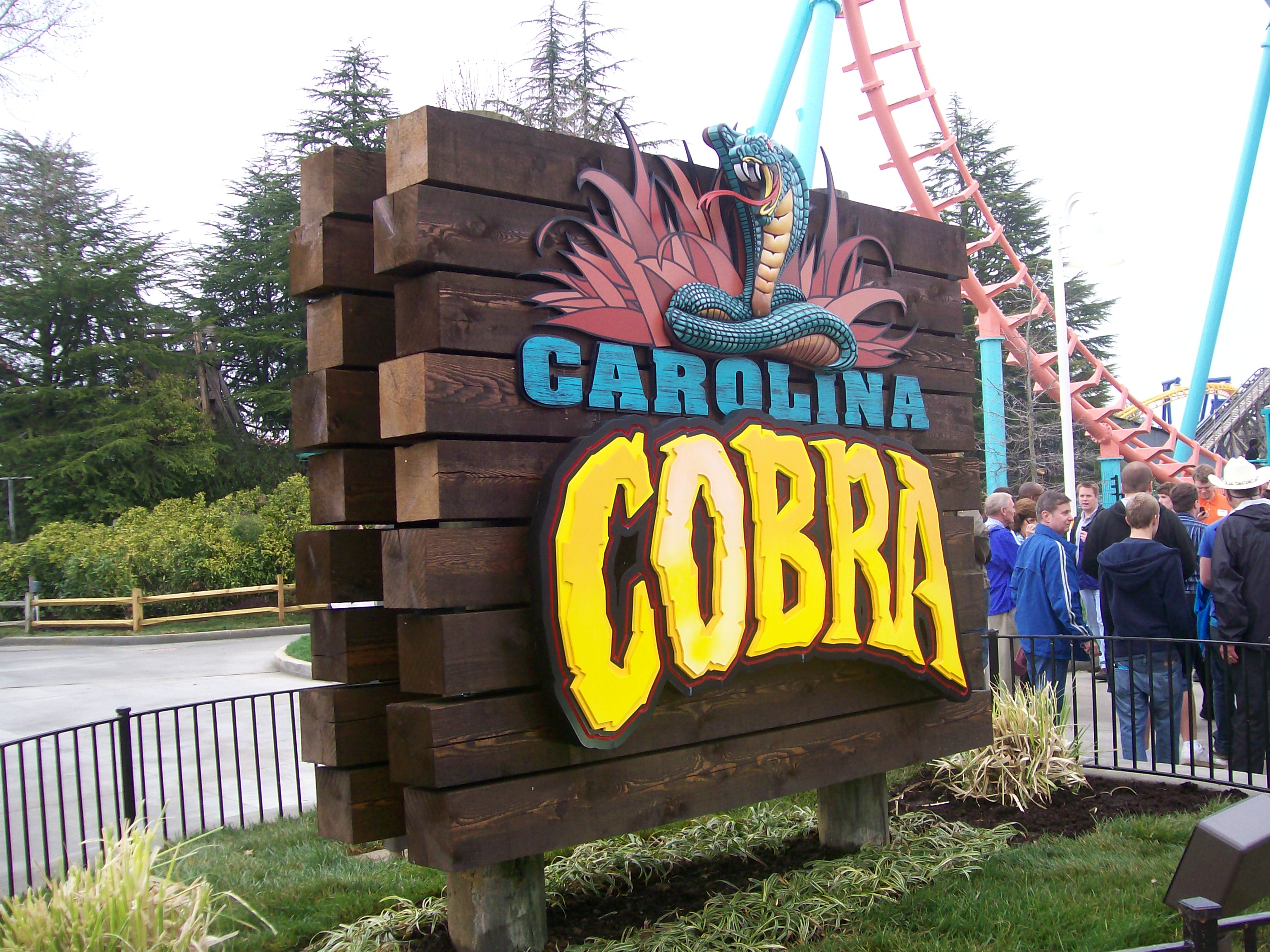 Once I made my way in I picked up my little packet of stuff and found the nearest restroom. I walked over to the newly renovated plaza now home to Carolina Cobra as it was cycling an empty train for the crowd. This was where I finally ran into Max in person. I also saw Jarvis, whom I’d also never met in person, but had interacted with online for years. Media day began with a park official talking about the new ride and everything that’s been going on with the park for the 2009 season. They were having audio problems, but I was able to hear him talk about painting buildings, the ‘new’ coaster, new landscaping, and banners that had been put up around the park. Even with all of the gloom from the rain I must say, the park did look nice and fresh and you could tell they’d added some nice landscaping.

But of course, most people were there for Carolina Cobra. This Vekoma Boomerang has found a 2nd home now that the rides side of Geauga Lake had closed down. I was lucky to have ridden it twice at the old park making this the first coaster I’d ridden at 2 different parks and thought pretty well of it from my last ride. Next up on the podium was Dani Swords, the new PR director. She came across as very enthusiastic, but sadly due to the audio problems, I could hear very little of her presentation. Up next was Bart Kinzel, the parks then new General Manager. He talked up the park pretty well and said that he saw a bright future for Carowinds. Then he took some huge scissors and cut the ribbon to the ride entrance. Sadly I missed this, but people headed to the queue for their first rides.

Max and I headed into the queue as well. One difference since the coaster had moved to Carowinds was the addition of a new train to improve rider comfort. This was the first of this type of train, and although I’d have loved to have tried one of the trains with lap bar only like a boomerang in Europe has, I must say the new train Carowinds got made a difference. I took some pix and even full video of the first official ride cycle with passengers. 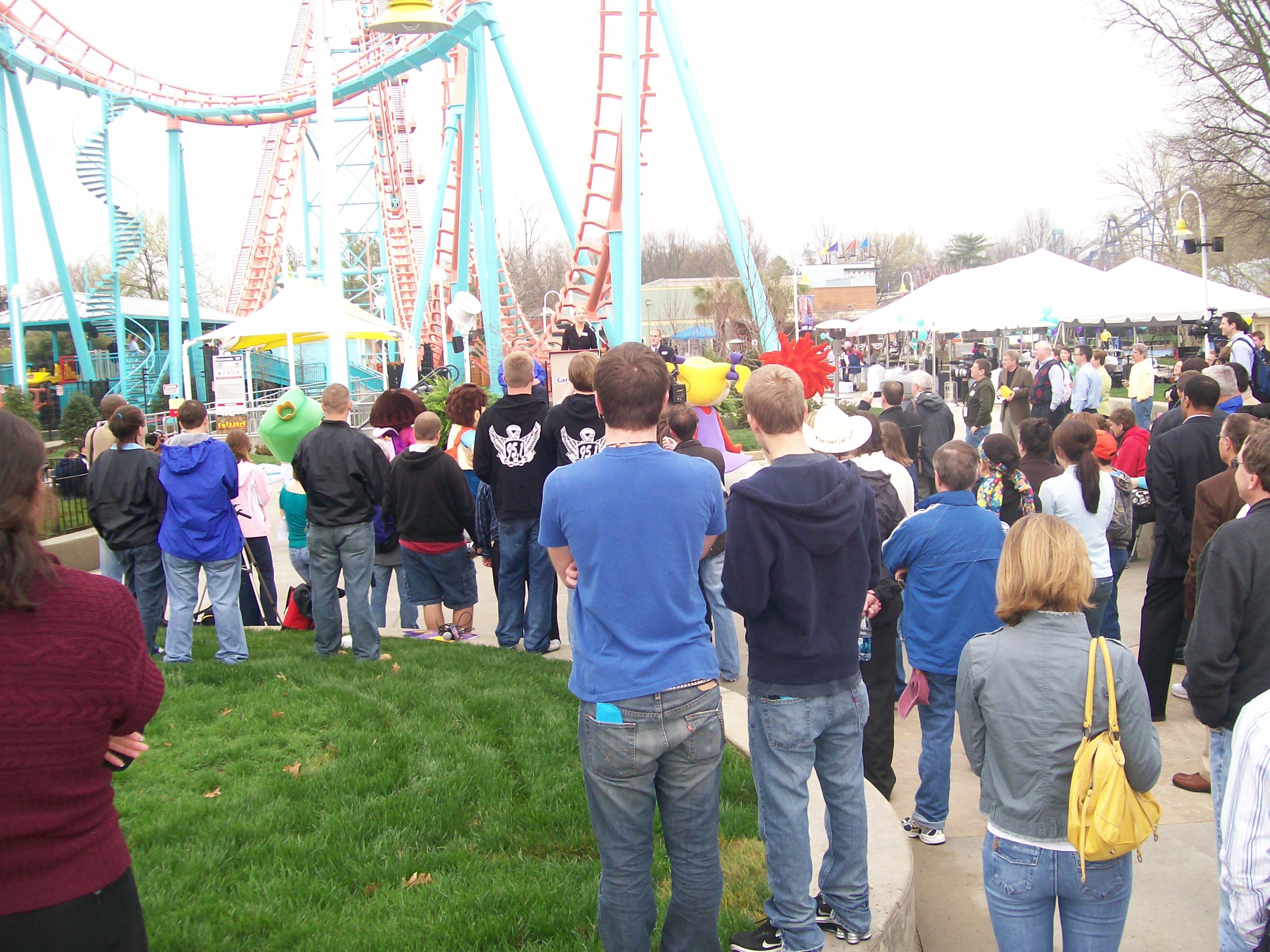 We were not expecting to ride in the 2nd train as there were no other rows open after they boarded, but 2 people were by themselves in different rows, so we chose to sit in those rows in order to get on quicker.

Getting into the new train was easy enough. The station was small but adequate, and the staff was very quick. There was a prerecorded ride spiel and once we were locked in the train dispatched. The first thing I want to point out is that the new restraints worked wonders. The shoulder harness comes so far out and away from your actual shoulders that there is no possibility of head banging. The vest was very comfortable and fit well.

Carolina Cobra–The lift up the first spike was painless as always. I have always enjoyed boomerang & invertigo coasters simply because the first drop is so very good. As we flew through the station I didn’t know if I should expect the inversions to be rough or not, but to my surprise the cobra roll & loop were both smooth and disorienting. I really enjoyed it, and it showed on my face for the on-ride photo that takes place right after the loop. The trip back was just as good, and as quickly as it began my maiden trip on Carolina Cobra was over. I was impressed with how smooth it was, and how fun these are when they’re comfortable. Even if it is used, Carolina Cobra was a good choice for Carowinds. 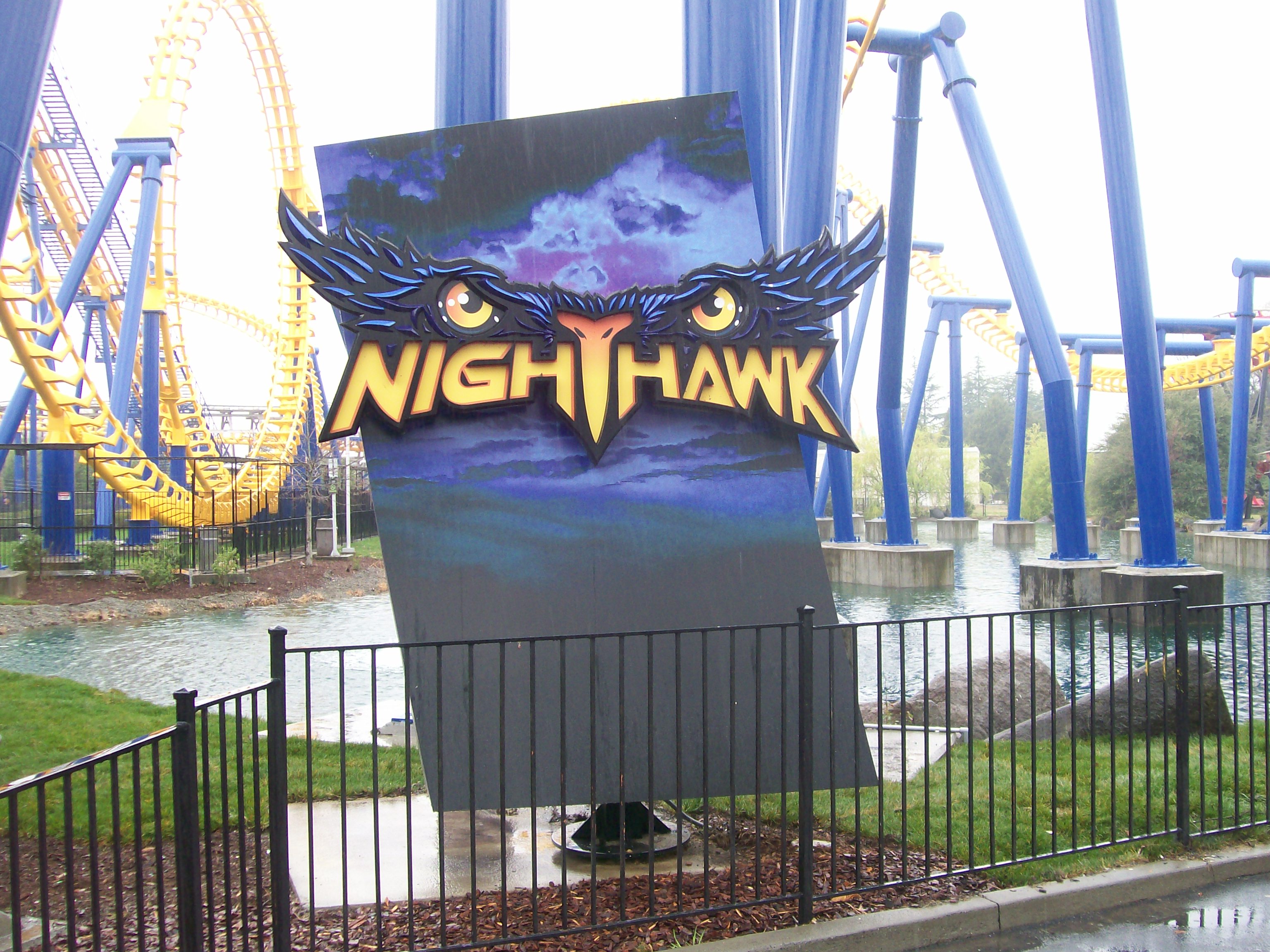 We headed into the hospitality tent next. There was a lot of good food, but I wasn’t very hungry so I had some pan seared bell peppers, cheese, and pepperoni. The entertainment from the cover band was nice, and even though it rained I have to give Carowinds credit for a very well put together event.

After eating inside the Wings restaurant I said to Max “Hey, let’s go ride Nighthawk” as there was no line, which was super rare for this coaster during operating days. Anytime I ever say those words to you, or if you hear me say those words to anyone, please smack me hard. We were offered a free game at a water pistol game stall, and after we finished playing, got in line for Nighthawk. It looked so pretty now, even though I really preferred the BORG themeing. But enough about the past… 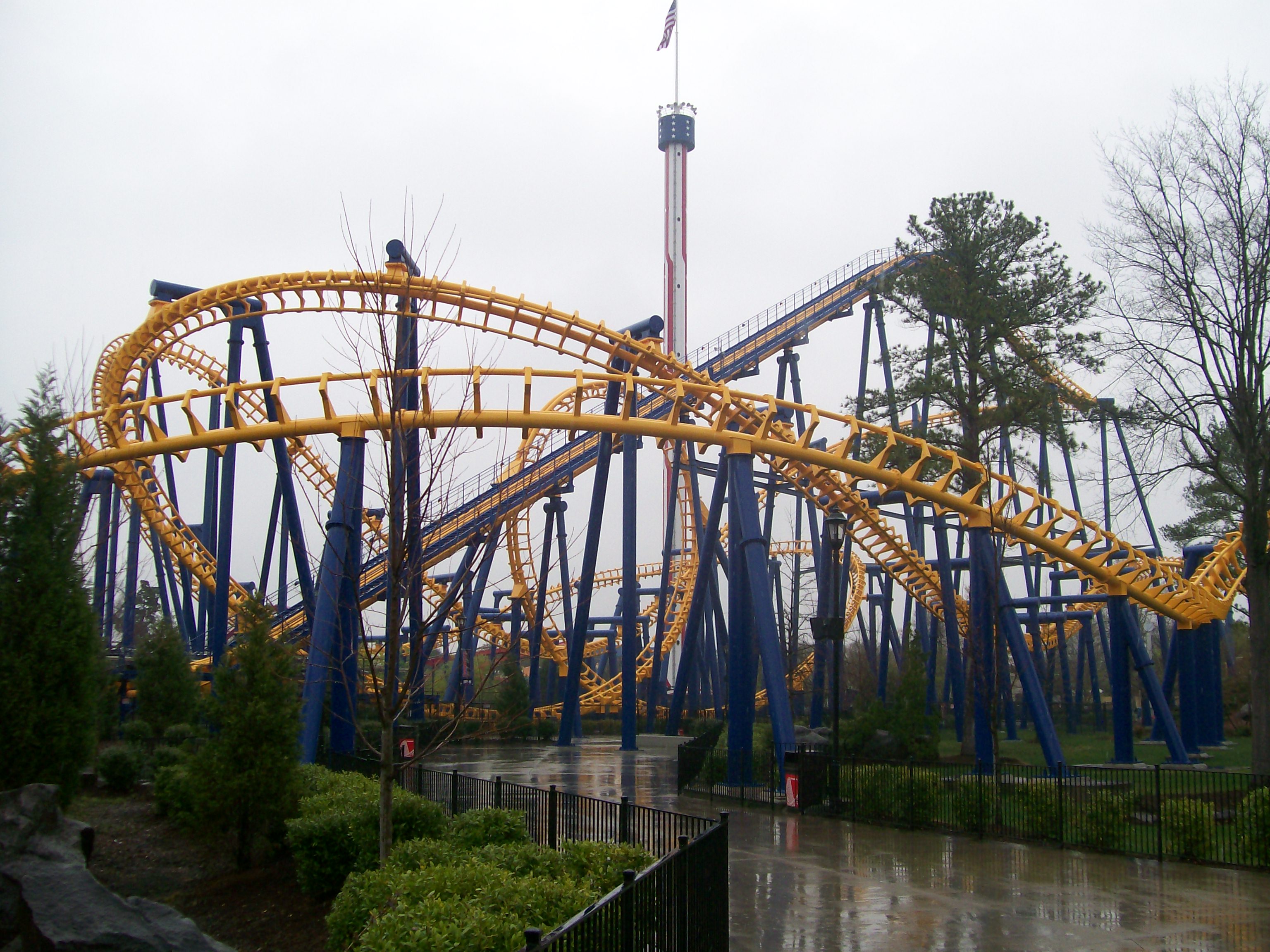 Nighthawk–I really enjoyed my last ride on a Vekoma Flying Dutchman coaster, and the very next day I would be riding a B&M Flying coaster for the first time. However, I really did not like this ride this time. It was nice riding without glasses for the first time, but this thing was so jerky and rough that I just don’t enjoy it. There were a couple of loading problems and then we were off. I think I could take the coaster if it weren’t for the loop, which has really strong forces, and the corkscrew elements. I rode just to make sure I still didn’t like it, and then moved on. It actually made me sick for the rest of the day.

After being beat up by Nighthawk, I decided to head out to Atlanta. I said my goodbyes to Max, toyed with riding Cobra 1 more time but decided against it with my newly soured stomach, and exited the park. The plan was to head south and ride some new to me coasters the next day. All in all, the media event was very nice and I’m glad I was able to go.