Ever since their newest coaster debuted, I’d wanted to go to Holiday World for their Holiwood Nights coaster enthusiast event in Indiana. My friend Matt gave it the name after a couple years off from their previous event, which I never go to go to, and lots of people I know make trip for the event. It had been held on Memorial Day weekend the first couple of years, which knocked me out of going.

In 2008 I was determined to go. I made plans to go months ahead of time. I’d never been to Holiday World. On May 23, 2008 I woke up around 4:30 AM, got ready, and headed to the Midwest for some hot coaster action. The drive from home to Louisville was about 6 hours. I’d stopped in Beckley WV to gas up and get a snack. Then around 11:00 AM I was pulling into the Louisville International Airport to pick up my traveling partners. Matt, Rob, Dan, and Melissa flew in from Philly and I would be driving them around as they accompanied and guided me into parts unknown for the weekend. As soon as we said hello and after I was introduced to Dan and Melissa, we got in the car and headed south to Bowling Green, Kentucky.

The drive to Bowling Green was about 2 hours. We stopped once we got off of the interstate at a Hardees for a quick bite and bathroom break. Then we headed to our first park, Beech Bend. After arriving at the small park, which just happens to be situated right in the middle of nowhere, we parked in the grassy parking lot and headed in. Matt had an American Coaster Enthusiast card which got us in for half price, so I scored on a POP bracelet. The park was really quirky with lots of portable rides set up around a large field with rolling hills and a pond, up from a drag racing strip. But they had a new highly rated wooden coaster, and my traveling buddies who had been said it was a quaint park with good rides. 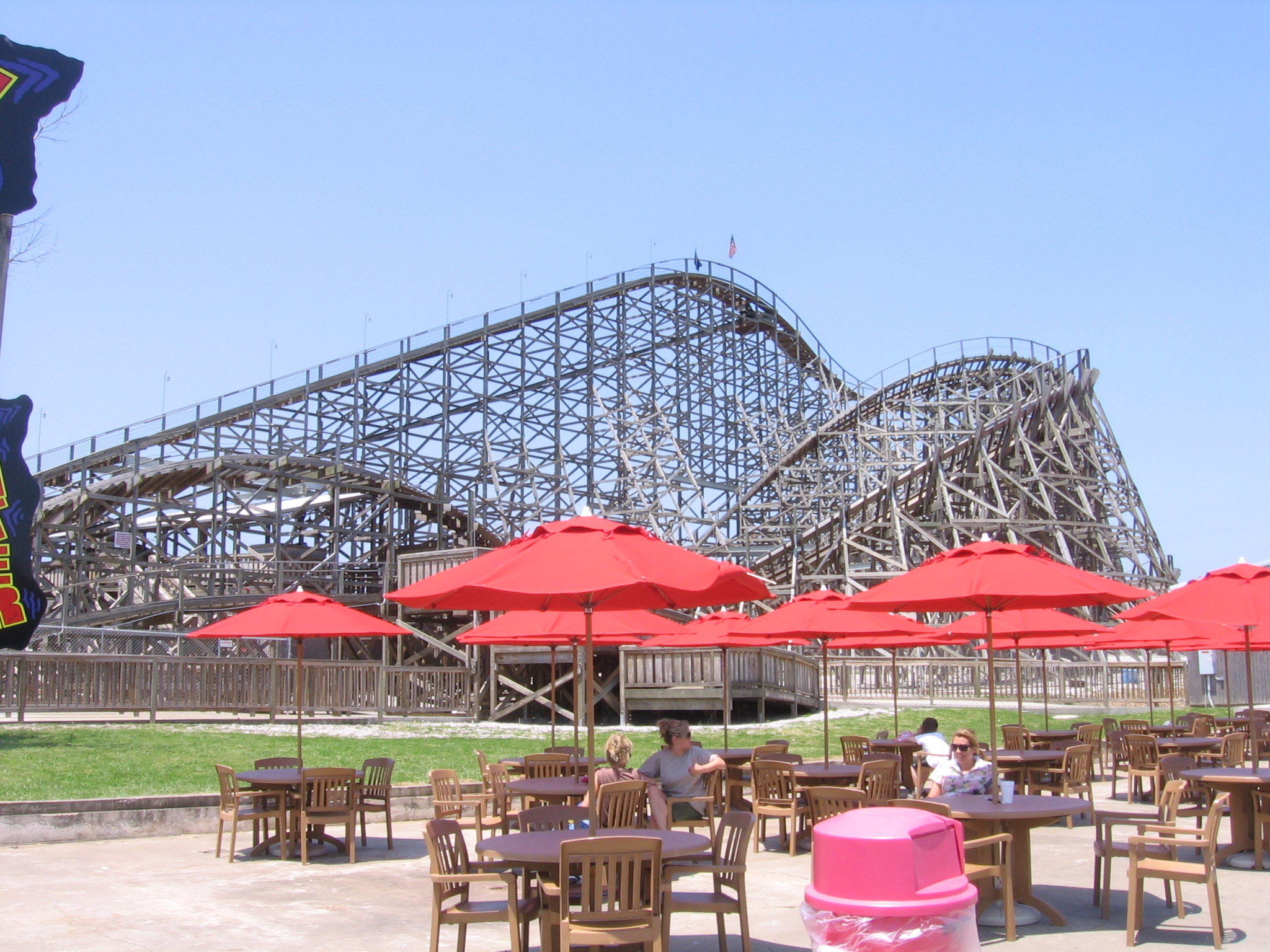 We walked around the front of the park and headed to their still fairly new wooden coaster, Kentucky Rumbler. I’d heard good things. We arrived at the very empty queue and I headed for the front with Dan, Matt queuing for the seat behind us, and Rob and Melissa in the back. The ride ops were very fun and friendly. We chatted with them while they were checking restraints and what not.

Kentucky Rumbler–The GCI guys must have an obsession with having a pre-lift section on their coasters. Not that I’m complaining, I think it’s fun. I really wasn’t expecting much from Rumbler, but once we headed over the first dip/turn/drop, I quickly fell in love! This coaster had awesome airtime and gave an out of control experience from the very first dip.  Rumbler is just crazy fun, and made me agree with whoever said wooden coasters didn’t need to be over 100 feet to be great. We immediately went around and got in line for the very back. Surprisingly the back wasn’t as fun as the front. Still good, but not AS good.

The exit was really long and required hand slaps going down the zig-zag ramp, and empties into a gift shop, which was kinda large and still fairly newish. We didn’t stay in there very long. Next up we were going to ride Looping Star, but headed to the Hip Hop Family Drop Ride instead because it looked fun. 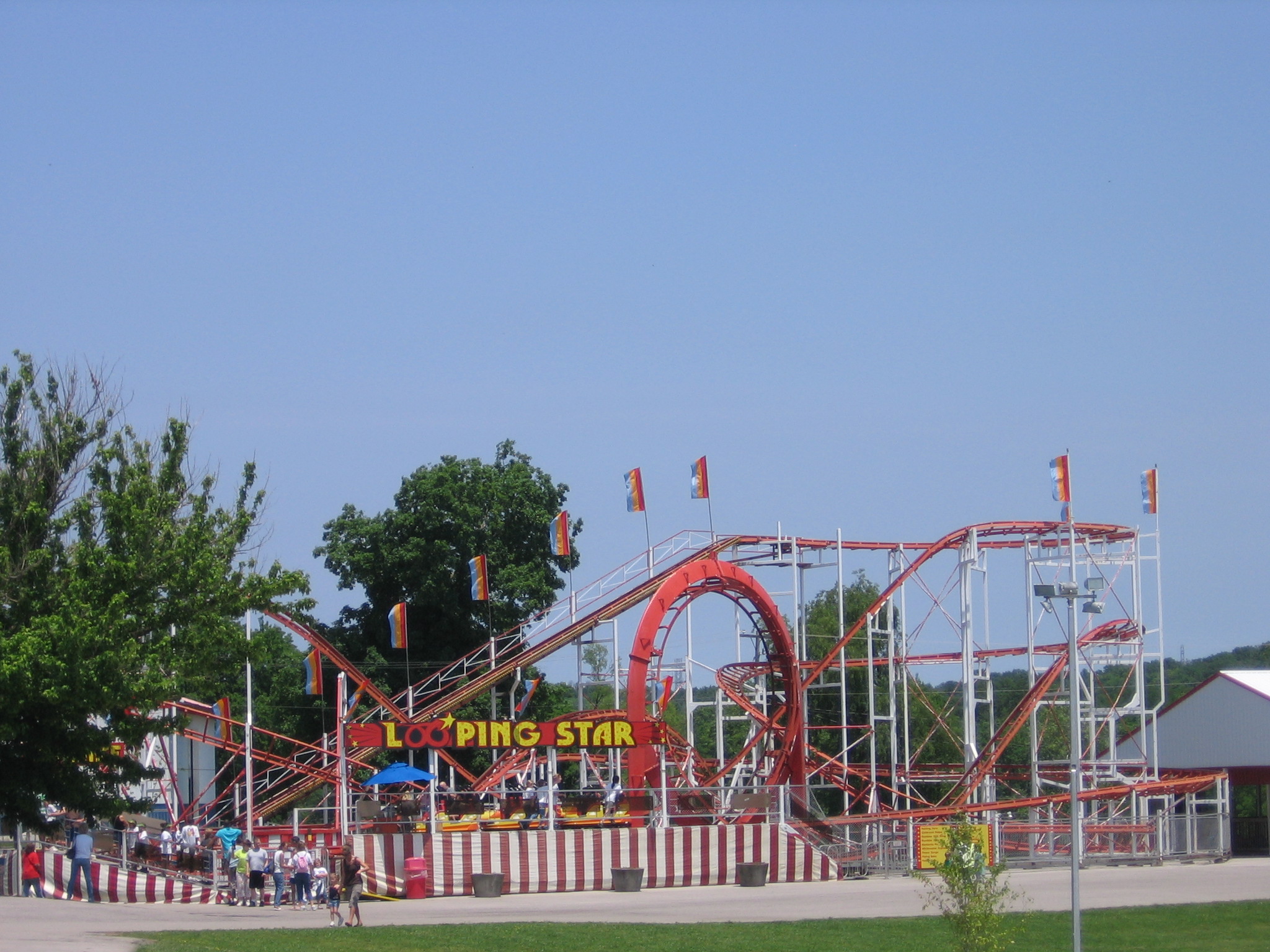 Hip Hop Family Drop Ride-Oh. My. Goodness. I thought it would be like the one we ‘broke’ at Dollywood. Nope. Not even close. No where near. This was one of the best rides of the weekend. You can’t ride it and not laugh  It was rather forceful and gave great airtime for a 30 foot bouncing drop ride. It bounced and gave a really long ride cycle. Moser Rides created a masterpiece with this thing. I’d take this in my front yard, please. I couldn’t stop laughing the whole time. The airtime was strong and the drops were too much fun. I LOVED it.

After that we headed over to the petting zoo to pet goats, look at chickens and cats, and play with lambs. We were there for quite a while petting the animals and taking pictures. Some of the goats were rather loverly creatures and I enjoyed the break, but it was hot and humid and seemed more humid in the petting zoo to me. After that we headed over to Looping Star. I wasn’t looking forward to it because it had a bad reputation and didn’t look very attractive from the midway. I knew it was going to be uncomfortable, but how much so I didn’t realize.

Looping Star–The ride op very funny, but the ride itself was terrible. It started shaking before we even got to the lift. The seats and restraints weren’t comfortable. The first drop did nothing but hurt. The turnsflung me into Dan in between the shaking. Then it went into that dreadful loop. Ouch. That hurt. In fact, I think it still does. Finally, after a few harsh turns, we were let off of the ride. As I was sitting on the brake run, however, the over the shoulder restraint was released, and popped up and bopped me in the nose. Not fun. It hurt. Never again… 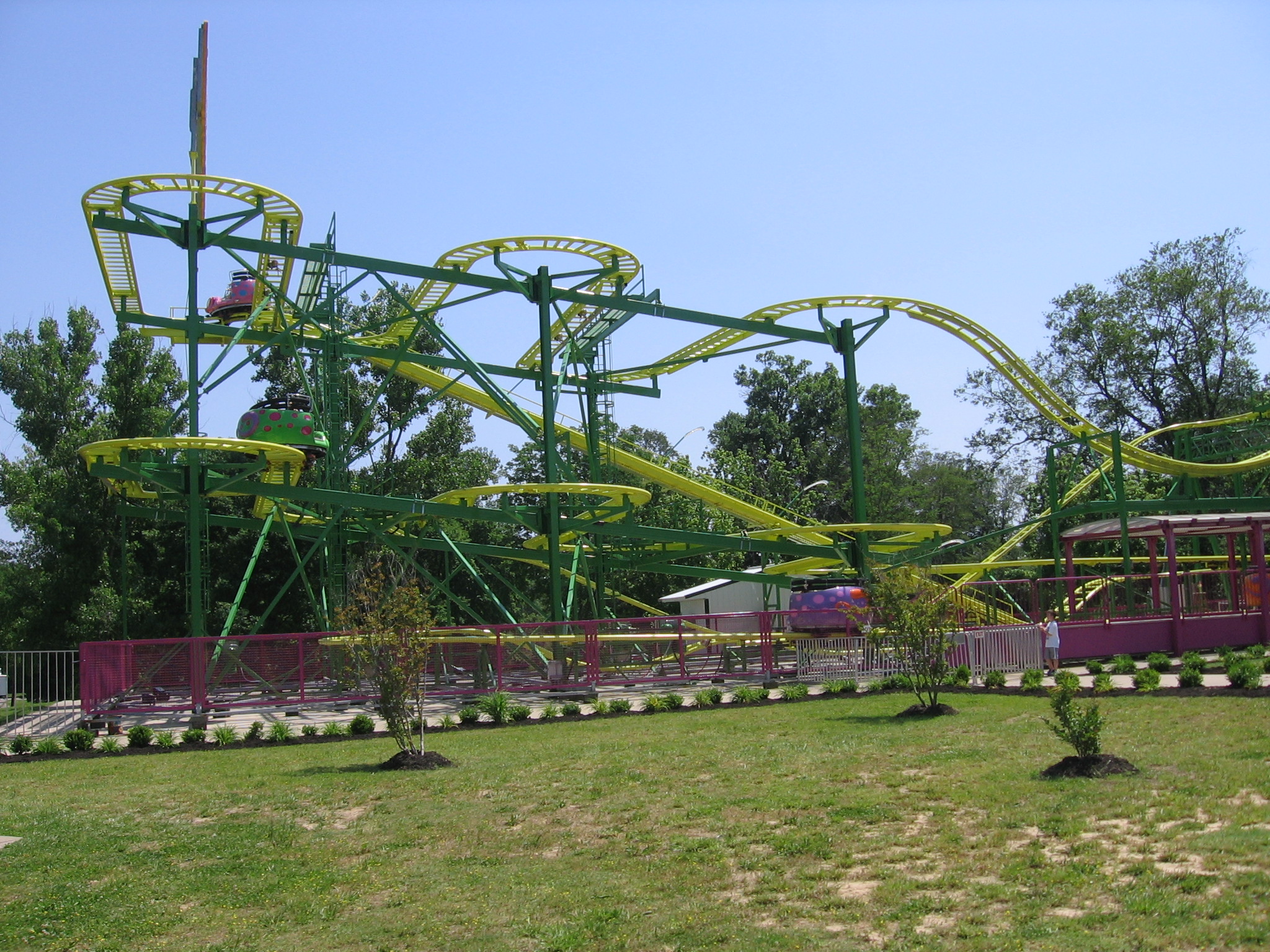 After that painfully bad experience, we headed over to Shock Drop, the drop tower.  It’s only about 80 feet tall, but it’s one of the best I’ve ever been on.  Melissa and Rob didn’t want to ride, so Dan, Matt, and Myself all got in line for a one cycle wait.

Shock Drop-Oh. My. Goodness. Heights scare me anyways. Dan and Matt tried to get me to not hold on at all, but going up I had to. You can’t look up and see the top of the tower because the top of the gondola shoots out above your head blocking your view. All you get is a quick clicking sound once you get to the top and then you drop. Going up to the top wasn’t bad because the ride wasn’t extremely tall, so I was okay with that. But this was one of the most intense falls ever. You stop literally just a couple feet from the bottom. It’s like you’re never going to stop. And it was amazing. I became a believer.

Next up was the Giant Slide.  The stairs were really narrow going up, but I managed to fit. The slide was fun if very short. At the bottom of the slide the pad on the asphalt to land on slid about 10 feet with me out onto the midway.  After we all got our slide on we headed to another coaster, the kiddie Dragon coaster. 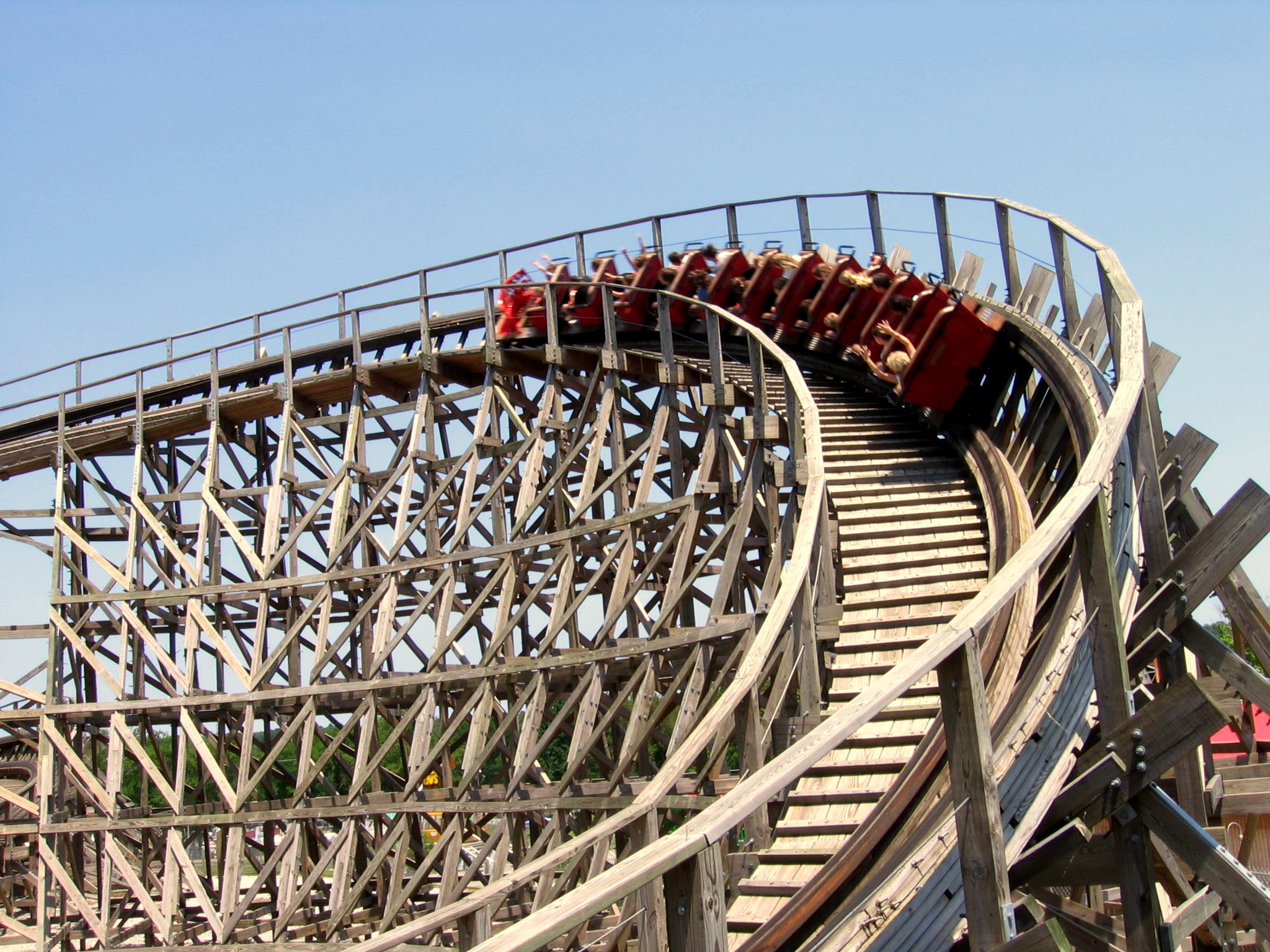 DragonDragon–This was an odd little coaster. I didn’t know they used an air compressor (The foreign ride op called it ‘air gravity’) to close and open the restraints. I’d never noticed that on any coaster before. There wasn’t much to say. The coaster goes around the track a couple of times before it stops. The first drop was fun, but it’s really just some turns and curves.

We headed down the midway to the dark ride named, appropriately enough, Haunted House. The line was the longest we waited in all day. Actually the mouse coaster may have rivaled it, but this one seemed longer.

Haunted House-I rode by myself. It’s pretty much just a big dark building with some flashing bulbs, buzzing sounds, and an occasional skull or dummy placed somewhere. Nothing major, but still interesting. I’ve been on better. I’ve been on worse. I’d rather have been with someone else to make it more fun, but we live and we learn.

Melissa and Rob wanted to ride the antique cars while Matt, Dan, and I needed water and a bathroom break, plus I wanted to ride another ride. We walked to the arcade and got something to drink, then I went to the little boys room. Dan said he’d ride the Moby Dick ride with me so we headed over to that. Matt was going to, but opted out taking pictures instead. 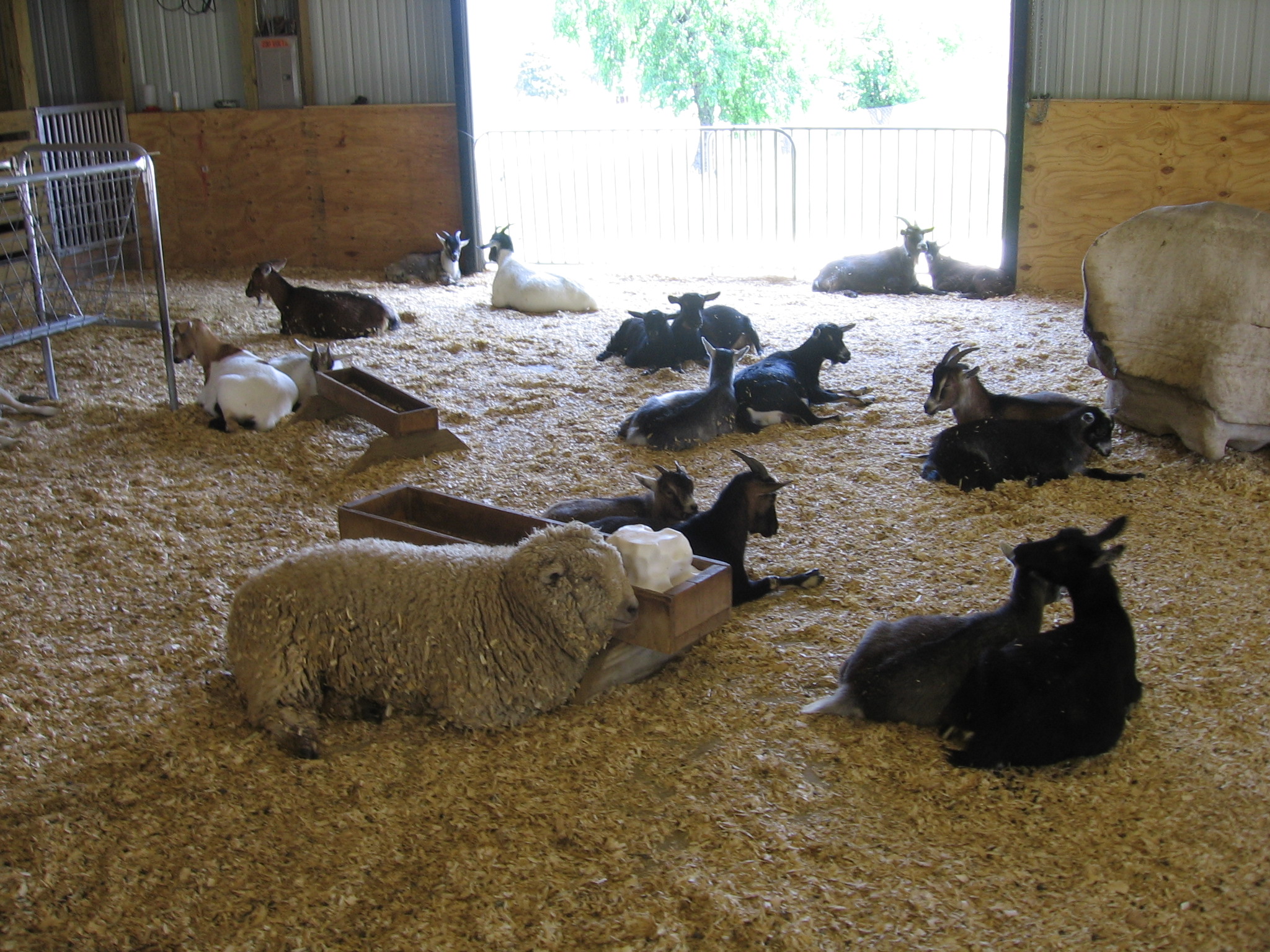 Moby Dick-I love these types of rides. The lateral forces as well as the airtime make for a fun ride. The ride cycle was rather long too, swinging both ways. Dan and I had an entire end section to ourselves. Matt took plenty of pictures and we yelled and talked to him on the ground. Another fun flat ride for a nice little park, even if the park does look like a permanent fair.

Rob and Melissa were sitting on a bench on the way to the wild mouse. We all got in line and waited in one of the longer lines of the day. I didn’t mind because the park was fairly empty and the line, while not covered, was shaded by nearby trees. Dan and I decided to ride together so that Matt could ride with Melissa and Rob and hopefully add to their spinning.

Wild Mouse–This was my fourth spinning mouse credit. Dan and I both sat on one side making the car uneven and allowing us to spin way more. The first half was fun, but unlike most mice they don’t really give me that “Oh, we gonna go over the edge” other wild mice do. But once we hit the switch, the car began twirling as we went around the tight turns and up and down the drops. This was the spiniest ride I’ve ever had on this type of coaster.

Dan and I watched as Matt, Melissa, and Rob spun to the end of the track. After we all got off of the ride we headed back across the midway. Stopping at the Giant Slide once again, asDan, Melissa, and I decided ride again. We wanted to race this time and Dan and Melissa hit the pad at the bottom before I did, which meant that it didn’t move when I hit it. Which also meant that my right leg twisted back underneath me. Which meant that I was in a lot of pain. For most of the rest of the weekend. But I lived. 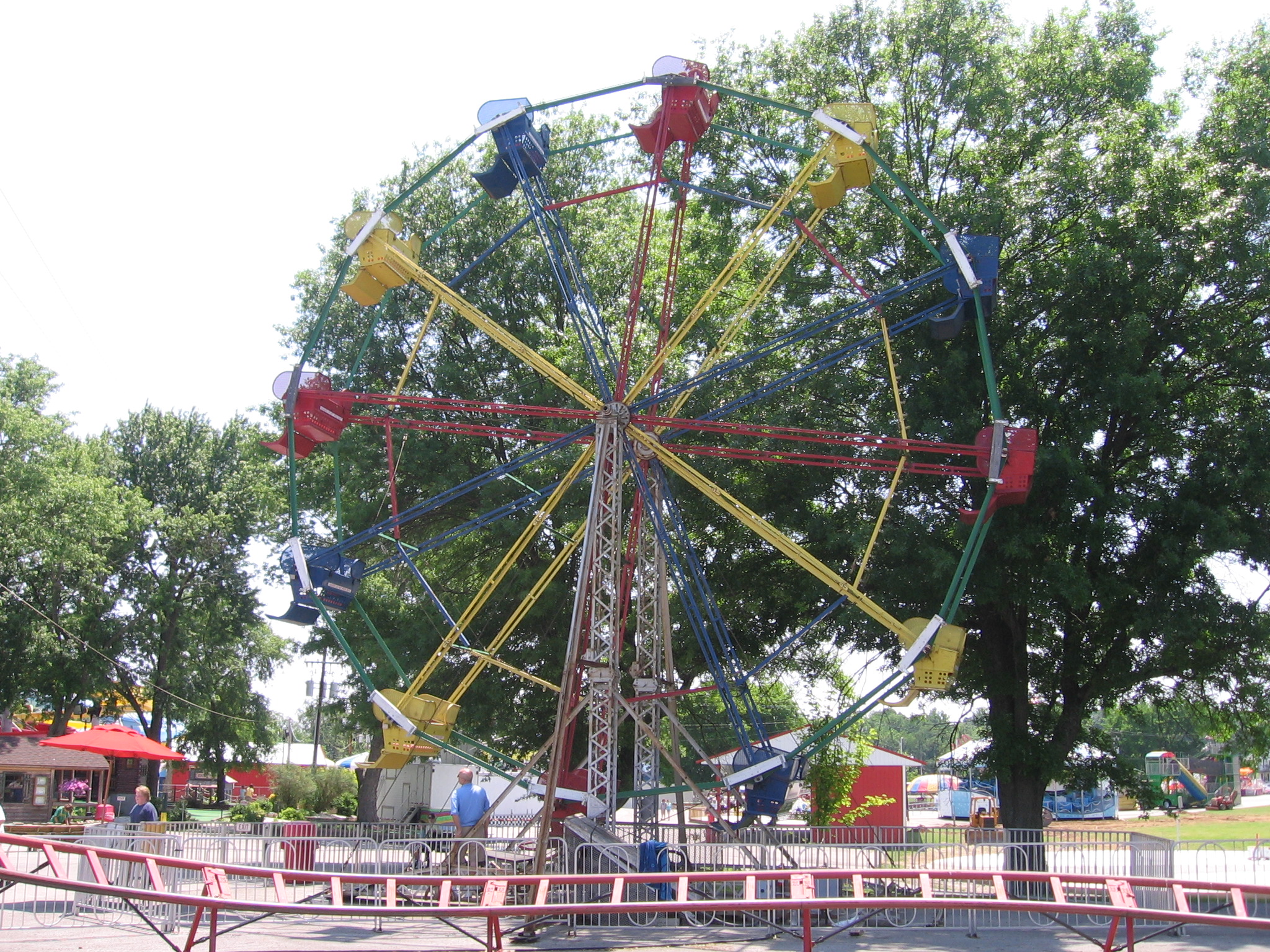 We walked back over to Shock Drop. This time I decided not to hold on, as did Matt and Dan. However, on the way down, Dan grabbed my hand. I guess it kinda scared him. Then we went back over to the family drop ride. The 2nd ride was just as fun. I LOVED it Melissa’s shoe fell off of the platform, but the awesome ride op retrieved it for her. I’m serious, this was my 2nd favorite ride in the park behind Rumbler. And that’s where we headed to next.  Once again, the station was empty. Dan, Matt, and I rode in the front again.

The ops were still fun to talk to, and the coaster was even better. I loved Kentucky Rumbler. Our day at Beech Bend was coming to a close. We stopped quickly on the way out for Matt and Dan to ride the Scrambler. Then Melissa and Rob grabbed a drink. Then Dan wanted to write a very nice comment at guest relations. The people at Beech Bend were genuinely friendly, ran the rides very efficiently, and wereawesome.  It was a charming park in the ‘permanent county fair’ kind of way. Rumbler was a great addition that they’re lucky to have, and they had a nice selection of flats and a cool little water park as well.

On our way to Holiday World we played 20 Coaster Questions on the way. We went over a really cool cable stayed bridge. Then we arrived at Holiday World at last. Here we were. So we parked and went to the entrance for my first ever Holiwood Nights.