I decided in early 2008 that I would start my coaster season off at Dollywood since I hadn’t been since 2006 and there was a coaster credit there I hadn’t gotten since I didn’t go in 2007. So, while everyone else went to Spring Fling, I went to Dollywood. I left home at about 7:30 AM and arrived to dismal skies and cool weather, but running rides. I was hoping Mystery Mine wouldn’t be down a second Saturday in a row.

In fact, everything was running except Timberrr Tower, which was testing. Mom and Dad had to be out of town for part of the weekend, so I opted to stay at home Friday nite to take care of the animals and leave early Saturday morning instead. Saturday morning I woke up around 7:30 AM, fed the animals, took a shower, got dressed, and headed southwest to Pigeon Forge.

The drive wasn’t long and I only stopped in Wytheville to get some gas and breakfast.  Once I arrived in Pigeon Forge, though, I couldn’t remember the back road to the park, so I had to wait in traffic. That time of year, however, wasn’t as crowded as summer and Xmas time. I’m so used to going into the old entrance to Dollywood that having to go in the new way was weird, but not completely foreign.  The sky was gloomy and threatened rain all morning, but at this point it was still dry. 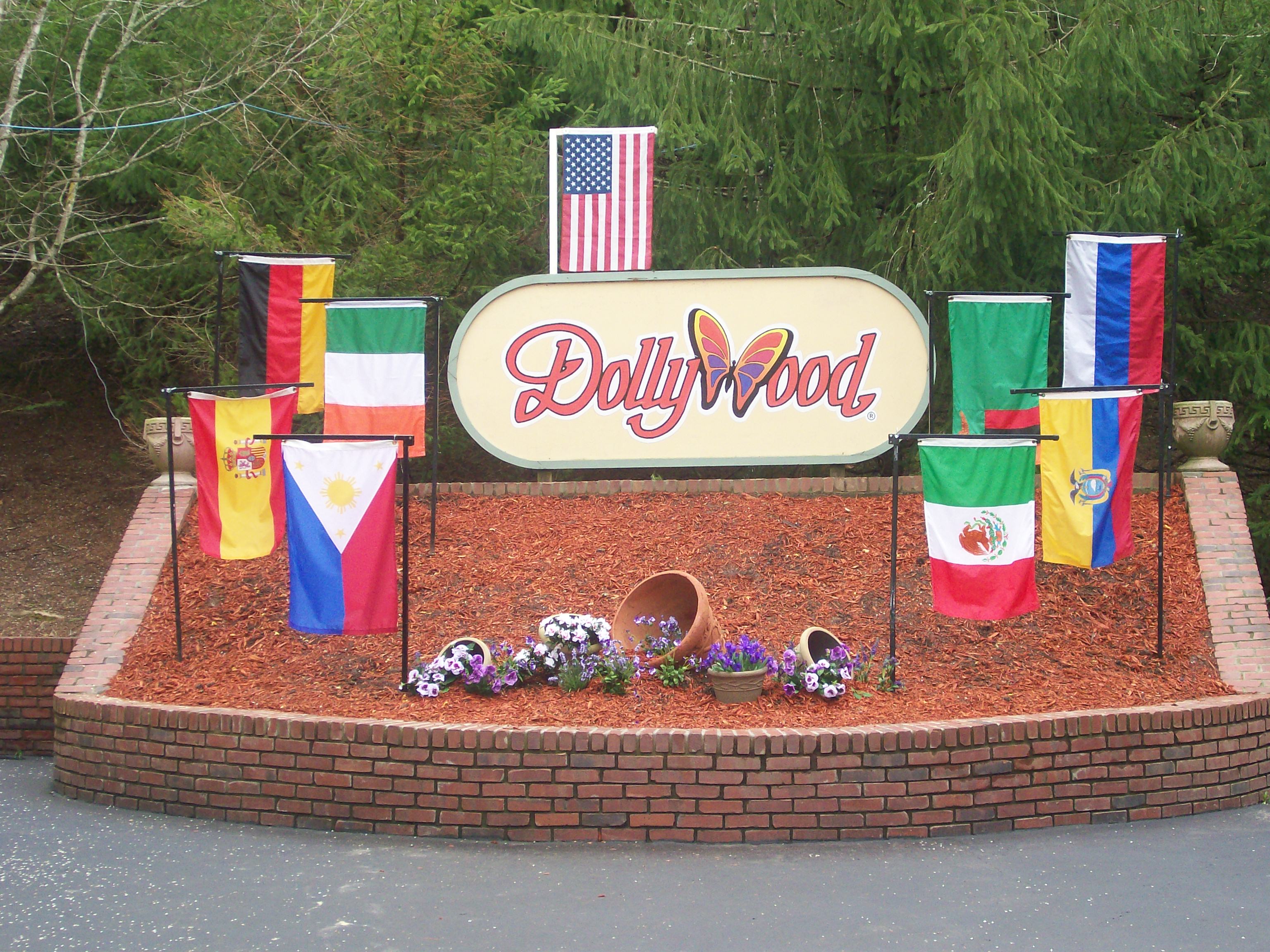 Once I parked I headed to the tram. Waiting on the tram to depart, I kept thinking that I should have worn my heavier jacket. I wouldn’t need it later, and would be happy that I didn’t bring it in the park. I was worried that Mystery Mine would be closed for the 2nd Saturday in a row, but the announcer on the tram didn’t mention it so I assumed it was running. Arriving at the gate it was still odd to me that you don’t see really any of the rides in the park unless you catch a glimpse of the Ferris Wheel or a turn on Thunderhead. I love that about the park, it’s so hidden.

I paid for my ticket and walked thru the front gate. I thought I’d picked up a map, but had the show guide instead. I headed to the left and up to Timberrr Canyon to get my first ride of the day. The area overall was only 4 years old and they just kept adding more and more to it. When I started going to Dollywood this area was called Thunderhead Gap, it was brand new, even if it only had a coaster, some shops, games, and a restroom.

Four years later most of the major attractions Dollywood had added had been to this section, save for County Fair which was in the front of the park. After a re-name to Timberrr Canyon and the addition of 2 new rides, another coaster, a kid’s play area, and more shopping, food, and restrooms, the area looked so different than it did when it opened. They’d done a great job with all of the additions. So I headed to Mystery Mine.  This was my first time riding and even though I’d seen it during construction, saw pictures of the completed ride, and knew what it looked like, I was very impressed with the theming. 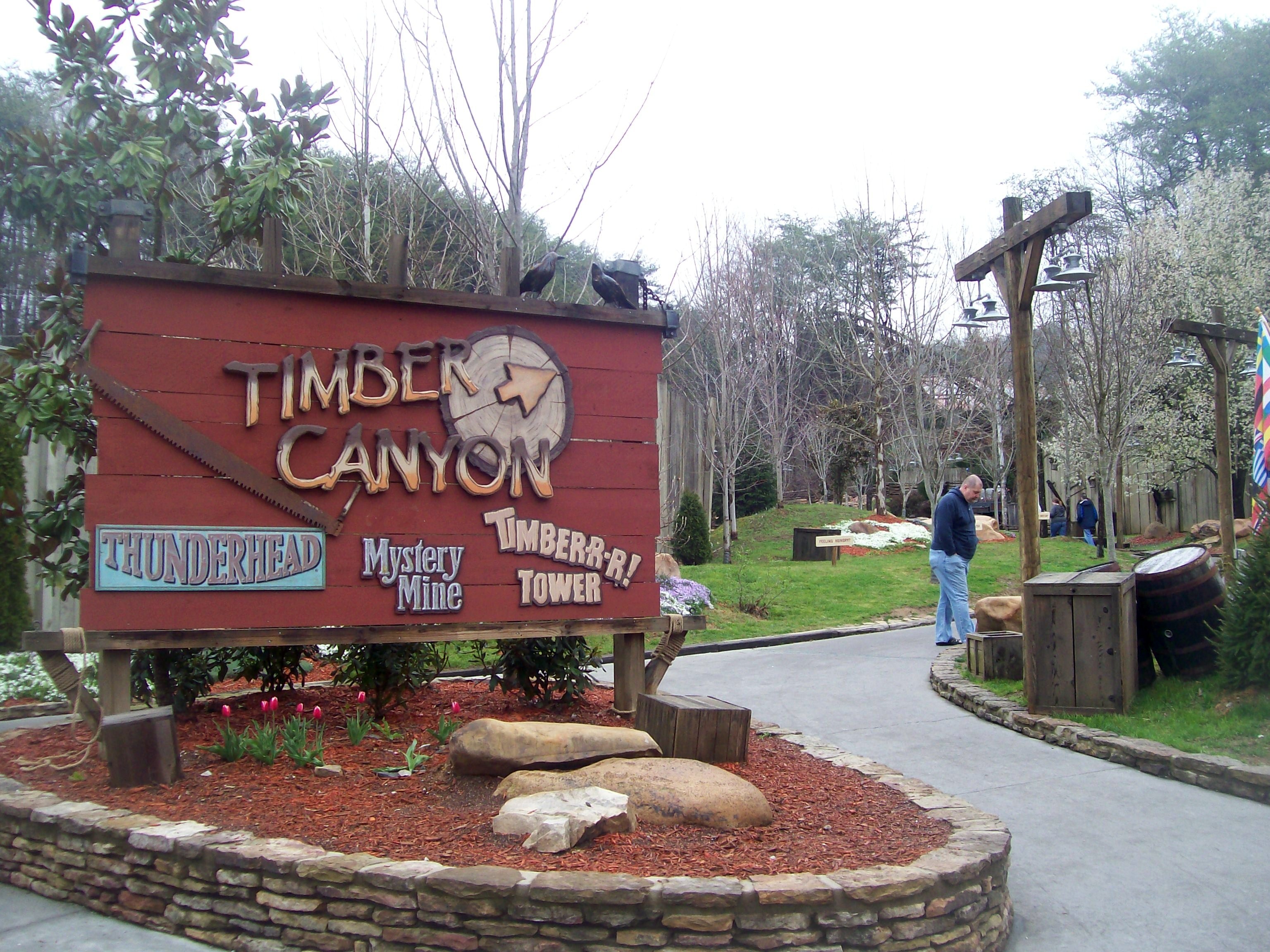 Mystery Mine–The line started at the top of the steps. There seemed to be a slight delay, but when I got closer to riding they asked for a single rider and I was put in with another group. I wasn’t aware at that point, but I’d be sitting in the same seat every time I rode on this trip. I’d decided that even though I forgot my strap, I’d ride this with my glasses on. I’m glad I did. The themeing on the ride was great. From the first drop out of the station to the first vertical lift, everything was so well done. There was some jerkiness, but the ride makes up for it overall. The first outdoor section was really fun and you get flung over the first drop in the back seat. I would have liked more airtime on the hill under the trestle, but oh well. The 2nd drop with effects was just amazing, and the inversions were nicely paced.

Mystery Mine was exactly what Dollywood needed and a great ridel. I was snapping pictures left and right and after I got off of Mystery Mine while I headed down towards Thunderhead. Timberrr Tower wasn’t up and running. I saw it test later in the day but never saw it cycle with people on it. That’s okay, though, because I wasn’t impressed with it on my last visit. I got in line for Thunderhead. The line wasn’t very long, but the ride was only running 1 train so the wait time was kind of long. I remembered how cheap their Q-Bots were when I saw the sign at Thunderhead, but it wasn’t crowded enough for me to justify even paying $10 for it. Thunderhead is always worth the wait.

Thunderhead–I knew I wasn’t going to get any nite rides on that visit, but Thunderhead was running in top form during the day rides that I got. I lucked out and didn’t have to wait any longer for a front seat ride than I would have for any other seat. This was due to the fact that Thunderhead’s station gets really congested, but that’s okay. I’d never dealt with crowds large enough for that to be a major issue. The ride was running very well and very fast. There was still ample airtime for a GCI coaster, and Thunderhead was one of the best investments this park had made.

River Battle was right past the Mystery Mine trestle and a short walk from anywhere in Timberrr Canyon. The new ride looked very nice, was very well themed, and looked like it would be lots of fun for families and groups. I decided not to ride as I didn’t want to be the only adult riding with kids by myself, especially since it was a cool and day staying wet was not on my list of things to do.

The rest of the area was nicer than I’d imagined. It looked very new obviously, but they’d added a couple of shops, food stalls, and sitting areas. And it opened up nicely to the upper part of Craftsman’s Valley. My one complaint was that there were no signs marking this as a new section, nor any signs telling you you’re now in Craftsman’s Valley. The opening to Tennessee Tornado was a welcome change. It opened up the area and showed how much room there was for expansion. 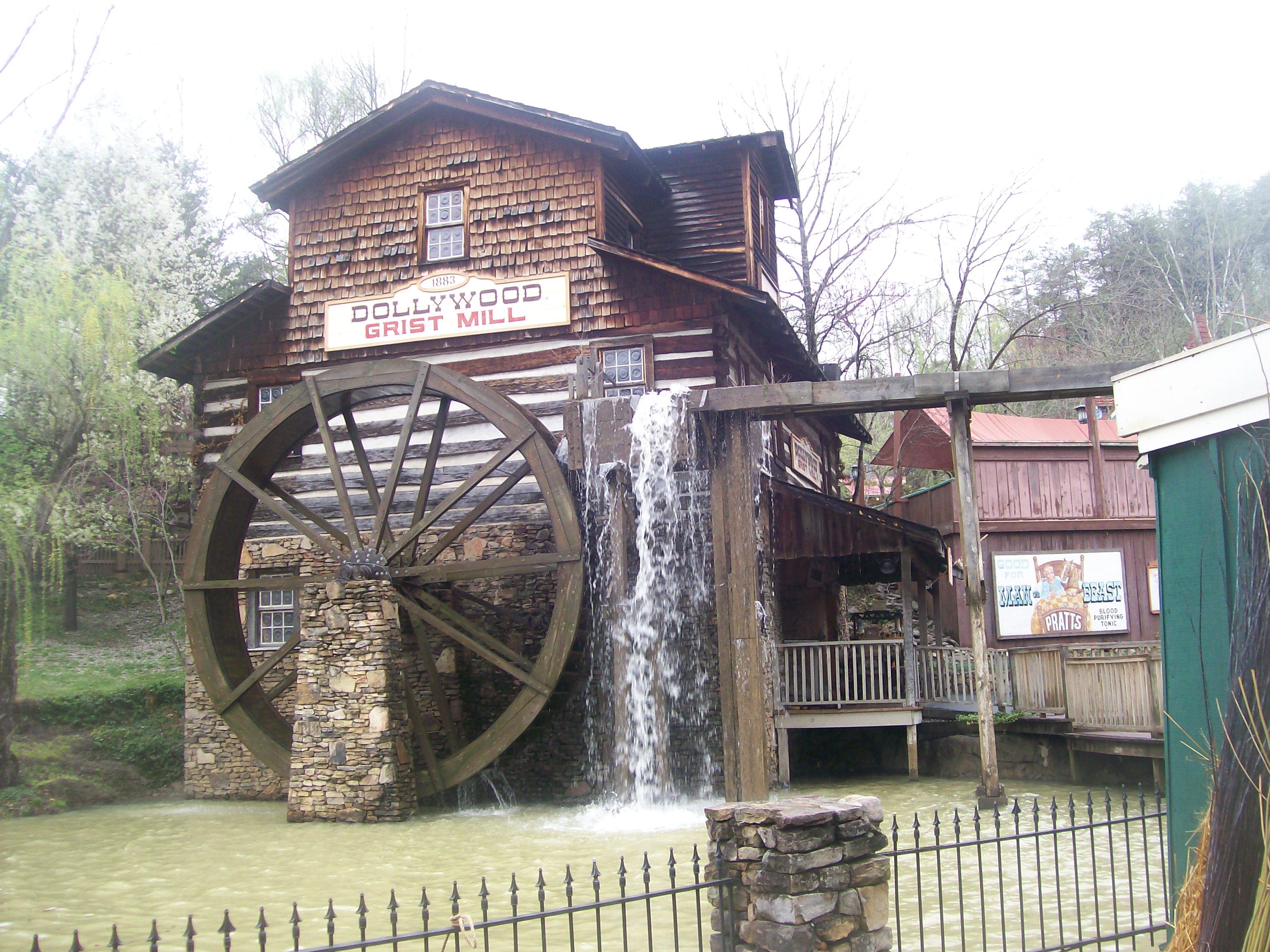 Tennessee Tornado–I rode in the very back by myself and I must say, I think Tornado has one of the best first drops on a steel looping coaster. You already got a good bit of momentum from going over the dip at the top of the lift, then the drop goes straight down and you’re in a tunnel. You get yanked over the top in the back. I loved it and always have.  Then there’s the loopscrew. Not a normal loop, almost like a corkscrew the way it banks, and it’s so huge that you get some hang time at the top. One of the best inversions out there that I’d been on. The overbanked hills and other 2 inversions were great as well. The pop of airtime onto the brake run was the icing on the too short cake.

Tennessee Tornado really showed that Arrow could create masterpieces were they still in operation. After Tornado flung me around the woods I decided to ride Blazing Fury.  Two trains were running on this one, and I only had a two train wait for my favorite seat. Blazing Fury is always campy, yet fun, and it’s another great part of Dollywood.

Blazing Fury–The scenes are really corny, and there are way too many dark spots, but the ride is still a lot of fun. The best seat is the third bench back because you get a few nice pops of violent airtime in the dark. 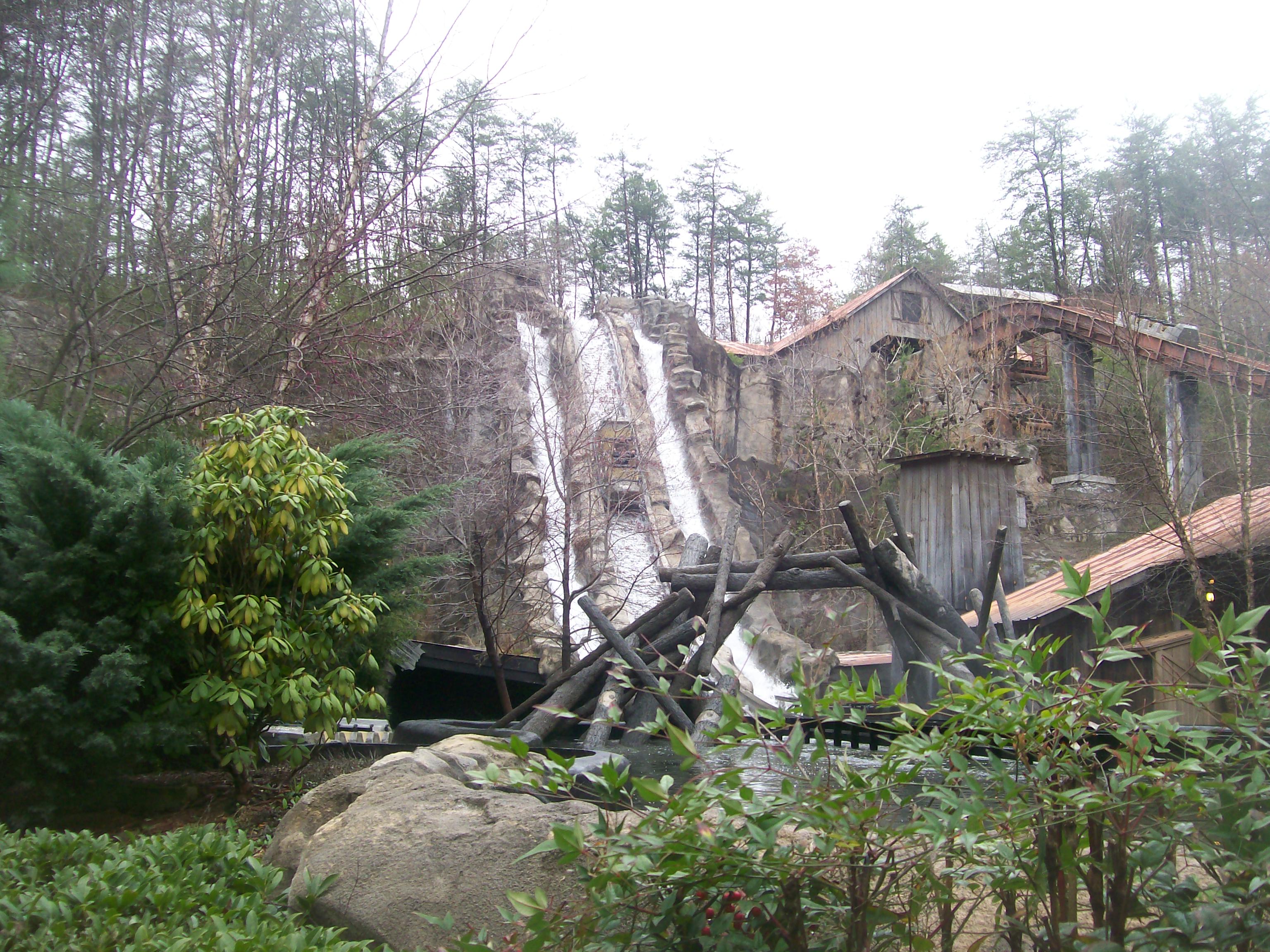 I headed down the mountain into Dreamland Forest, which had a great kids play area.  But I was heading for something a bit more thrilling…

Daredevil Falls-This was the first time I’d gotten to ride it. The ride is really fun and I liked the setting. The main drop is well themed and goes down the side of a hill, with extra themeing surrounding it. You don’t get very wet, which was nice on a cool morning.

I headed all the way down the hill to the Country Fair section of the park. I rode the Dizzie Disk and took some photos before heading into the Heartsong Theater. It was introduced to me on my last visit and I really enjoyed the campiness of the attraction. I think I rode the cars in the 50s themed area next. Then I walked back up the hill towards Tornado, but my first stop was about midway up. Well, at least the entrance was. I headed to the entrance to Mountain Slidewinder, and there was a much longer hike to go past the entrance, up the mountain. 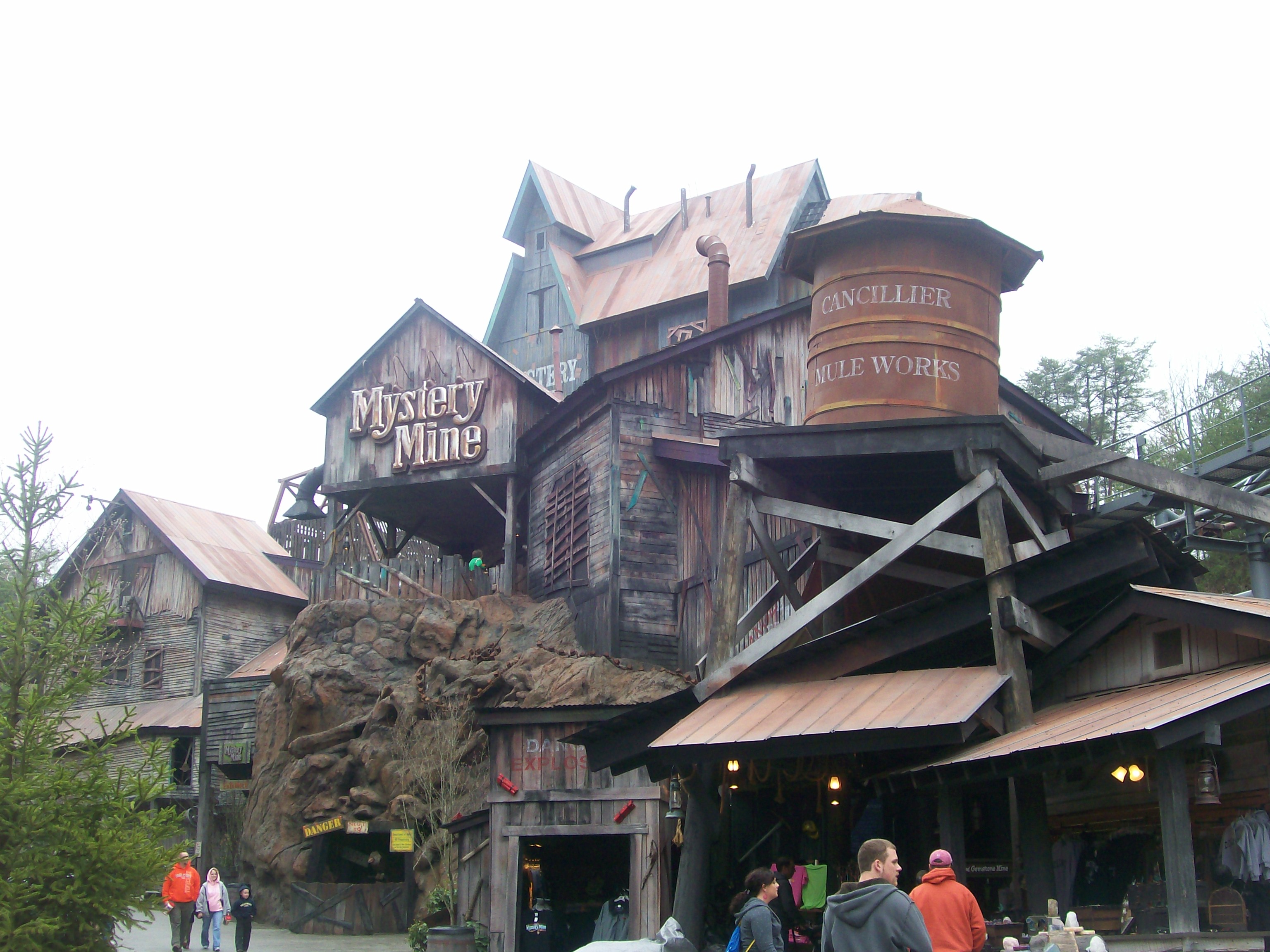 Mountain Slidewinder-After finally huffing my way to the entrance of the ride, I was put in with 4 kids. Wow this ride was amazing! Very thrilling! Very unique! I really enjoyed it, and though most rides rarely scare me, I was genuinely frightened on Slidewinder.

I got off, got my stuff out of the locker and headed further up the mountain.  I stopped and looked at the Eagle sanctuary. I think I also stopped at Blazing Fury, and I definitely took another spin on Tornado. Then I walked back over for a farewell ride on Mystery Mine. Another great addition to this amazing park.

I was tired and had plans for the evening, so I finished my day with Thunderhead. This would likely have been the last ride I’d have had a chance to ride anyways, because once I got off and headed towards the tram stop, the skies opened up and it began to pour. So I headed to my car and out for the evening. I love Dollywood, and I’m glad I was able to go in the spring when the park has it’s water rides open.