Larry had mentioned that Nathan & Corey were going to spend Tuesday at Red Rock Canyon. So on Tuesday morning we  met up with them to hike in the Canyon for the day. At first I opted out, but then decided to go ahead and go. My feet hurt and I didn’t feel like more walking, but I ended up going with the others. It took a while, but the boys finally arrived to pick us up, stopping at Carl’s Jr. for something to eat as I was starving.

Getting to Red Rock was an adventure, but once we arrived it was worth having decided to go. We spent a few hours hiking up the rocks and in the canyon, taking pictures, and even spending time relaxing on the rocks. I never did anything too hard, but I did some really basic rock climbing up a few small rock faces. Larry, Corey, and Nathan were a bit more adventurous. Corey had brought rock climbing gear, but left it at the room. We did watch other groups climb up some of the cliffs, though. We found some really interesting parts of the canyon to explore and take pictures of. The day was cool but not cold. The sun, however, was severely bright.

At one point we all climbed up to a point on the rocks and sat and watched over the canyon. Larry took some video, and we all just lay around and did some people watching. Even though we spent quite a few hours at Red Rock Canyon, and I really enjoyed going, there isn’t much to type about other than we walked, sat, climbed, walked, sat, climbed, and then we road the entire loop around to get out of the National Park. Once we were finished I told Corey that I was thirsty, and the guys that didn’t eat in the morning were getting hungry. 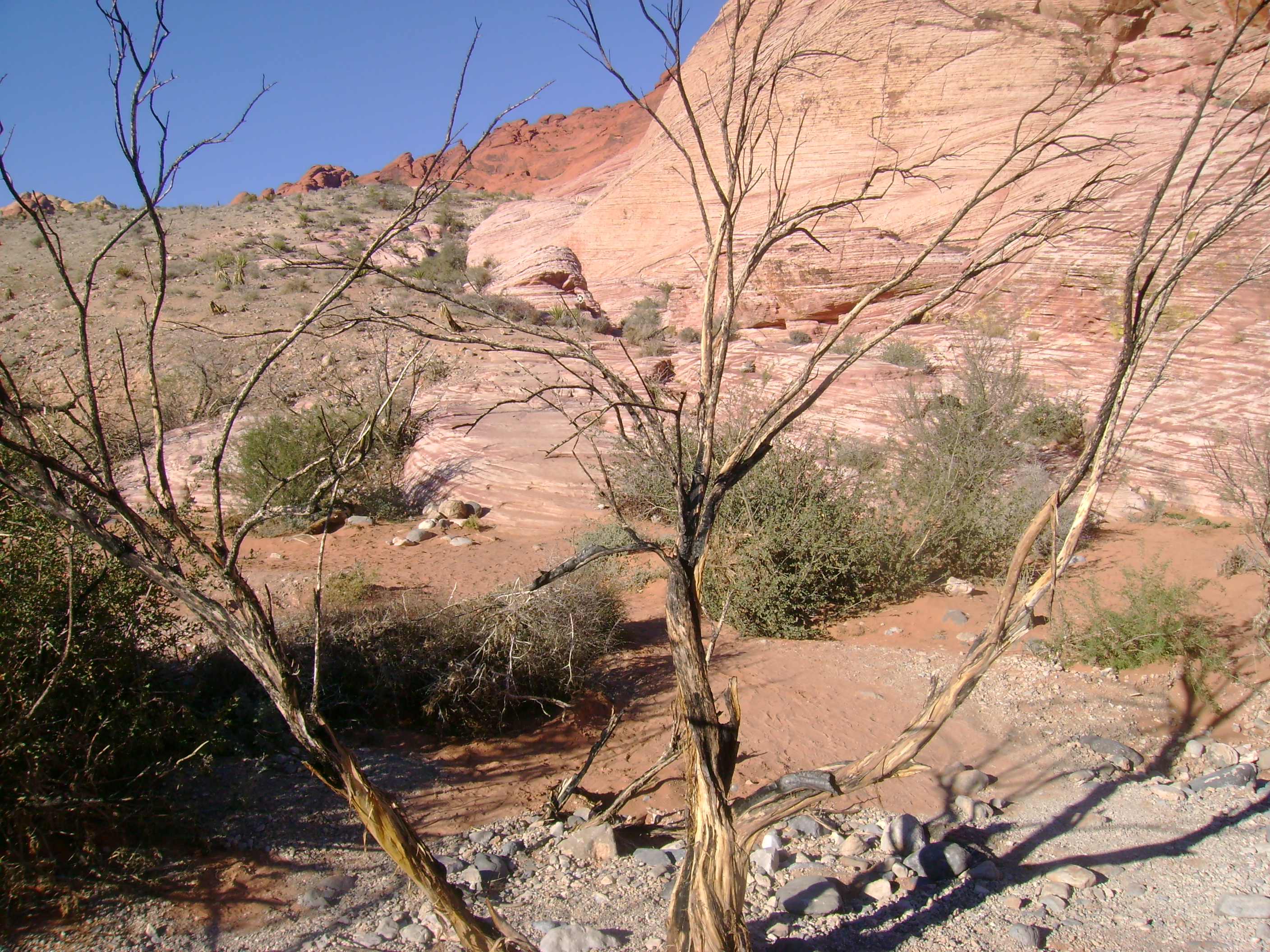 I’d have liked to have gone back to the Hotel, especially since I was very uncomfortable in the back of the cramped car, but we rode around the burbs of Las Vegas a good hour before they finally stopped at Panda Express. I’d decided to eat elsewhere later as I wasn’t hungry at that point. Once we got back to the room and freshened up I decided I’d go back to the north end of the strip and hit up Speed and the Adventuredome. I headed to the Monorail, but part of the sidewalk and thus my short-cut to the Monorail was closed off. I did, however, get to see the MGM Lion habitat with lions inside this time.

The original plan was that I was going to meet Jon and Larry at the Adventuredome in a couple of hours.They were planning on trying to get cheap show tickets to something that evening, and then were going to take a nap. I took the Monorail to the end of the line and purchased an unlimited ride pass for Speed, giving me the opportunity to ride a bunch of times. I even rode on the train a few times by myself. Eventually I walked through the casino, took some pictures of Speed outside, then headed to Circus Circus and the Adventuredome.

Since Circus Circus wasn’t far from the Sahara I walked. On the way I called Larry and he said that they’d gotten tickets for a show and that if I wanted to get one myself I could as you purchase a voucher for a ticket and then can get seats together once you arrive at the theater to pick them up. But they were going to have drinks at Red Square first and then go to the show. I opted out of the show because I wasn’t interested in the one they had gotten tickets for and told Larry I’d see them later that evening, and continued on to the Adventure, but once I arrived it was closed.

I headed back to the Sahara and again spent the evening hanging out on the north end of the strip near Stratosphere. I had forgotten to eat earlier so once I was ready to head back too the hotel I stopped at McDonalds for a quick bite and then took the Monorail back to MGM Grand and then headed for the Luxor. When I got back to the room Jon and Larry informed me we had dinner reservations at Red Square for Wednesday evening with Corey, Nathan, and Corey’s friends before we went to bed.