On Saturday December 1, my parents drove me to Charleston WV to meet Larry & Stephanie, and from there we left and drove to Elkins. One of Steph’s friends was along for the ride as well. Jon drove his new car to meet up with us in Elkins. From there we drove to Charles Town, where Jon’s brother lived. We watched WVU get soundly beaten in football as we stayed there for the nite, although I don’t think any of us got much sleep. As we were leaving the next morning, I made sure to grab my wallet, and I saw an extra key on the table by the couch that looked like the extra key I keep in my wallet, so I put it back in the side pocket where it belonged. I did, however, manage to leave my tooth brush RW’s house.

We drove to Dulles, checked our bags, and ate breakfast all before the sun rose. I’m not a morning person, but we booked a flight at 8:15 AM EST so that we could have a full first day in Las Vegas. At approximately 8 AM we were boarding the plane. This was our first time flying Southwest, and thankfully we got in the ‘A’ boarding group. The flight seemed longer than it should have at over 5 ½ hours. But we were on a plane going to Las Vegas, and everyone was in a party mood. Just before 11 AM WCT we landed at McCarran. Having watched Ratrace numerous times on DVD, I knew that this airport had slot machines. And that was what you were greeted with as soon as you stepped off the plane and into the terminal.

McCarran had a very Vegas feel to it, with shiny surfaces, slots, and neon lights. I was surprised at how quickly we got our baggage and how close the taxi line was to the baggage claim, which was good because I WAY over packed for this trip. But in line for the Taxi this annoying older guy kept trying to cut me off from my group by getting in between me and the other 2 . Finally I outsmarted him and ended up in between Larry & Jon. So we got our cab and were off to our hotel. It was a sunny day, but colder than it looked outside. 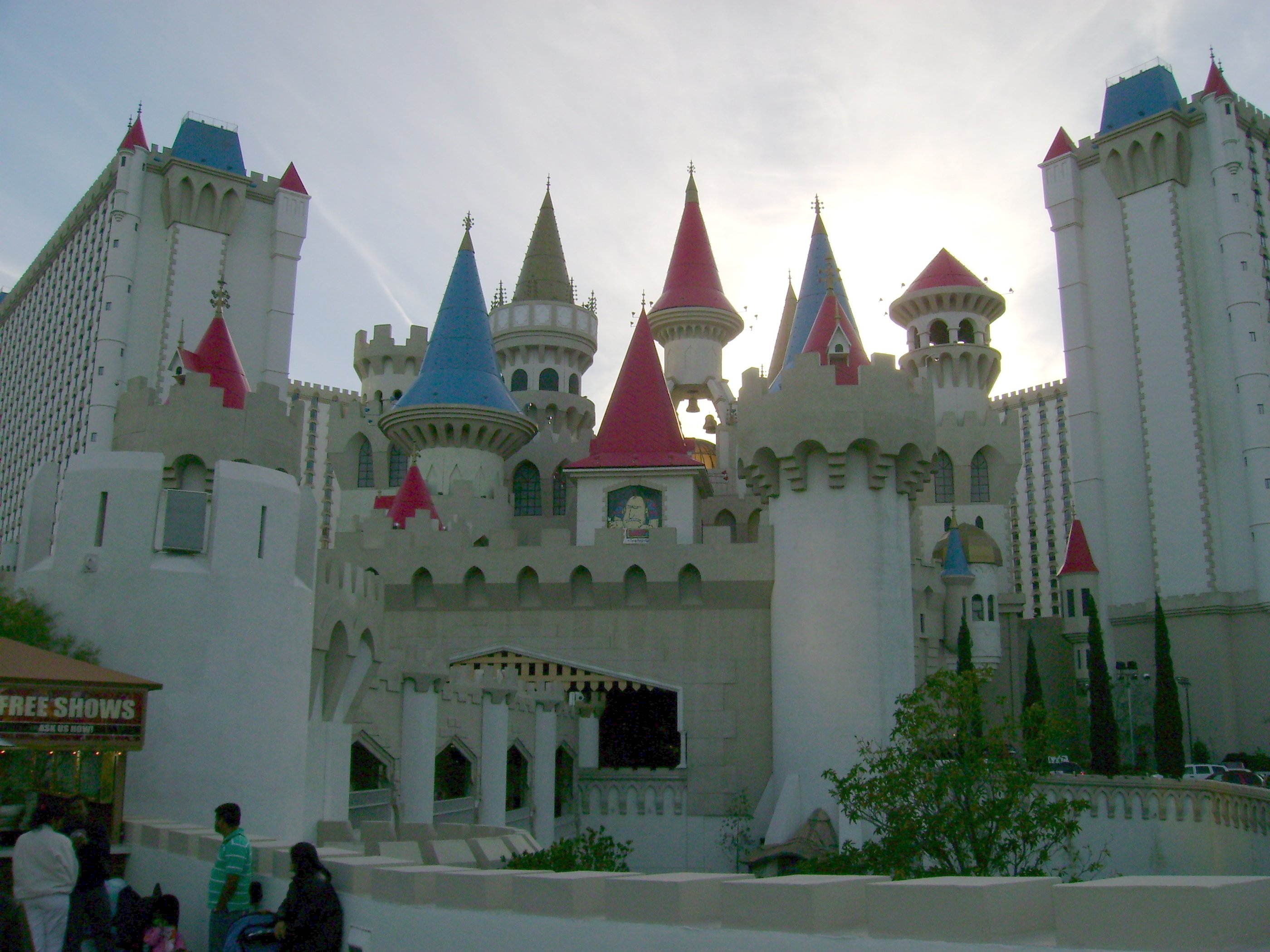 This was Jon’s first ever cab ride. The driver was really nice and was telling us about the marathon down the strip that had happened that morning. Once arriving at the Luxor we saw many of the runners. We headed inside and checked in. We had reserved a Pyramid room, but the lady at the counter, who’s English wasn’t really that exceptional, insisted on upgrading us to a tower room, which she said was bigger. She offered to do it for $20 a nite, but then said she’d upgrade us for free and add in a roll away bed. I wanted a room in the Pyramid, but oh well. Our room was really nice.

We all freshened up and changed clothes for lunch. Larry suggested a Mexican restaurant in our hotel. I’d have preferred a buffet, but I was hungry so we went of the Mexican place. I wasn’t impressed. It seemed forever to get our food, which was good, but not great. And the waitress could have been faster and kept my water filled. We were so out of it from no sleep and having flown 5 hours. I don’t think anyone really had a clue what to do. This was Jon’s first trip to Vegas so we wanted to show him a good time, but we explored the hotel first, going thru the arcade. The manager of the arcade kept making announcements when we walked in telling us we couldn’t drink or smoke in there, not that we were doing either at the time we walked in, so we left. We got tickets to the recreation of King Tut’s tomb and the In Search for the Obelisk motion ride for $15.

King Tut’s tomb took us around 30 minutes. Its a self guided tour, part of which uses headsets, and it was interesting, but nothing I needed to ever do again. You go thru different rooms and look in at the recreations of the tomb as it was found when it was discovered. It was a decent recreation too. But I was glad we got to see it. 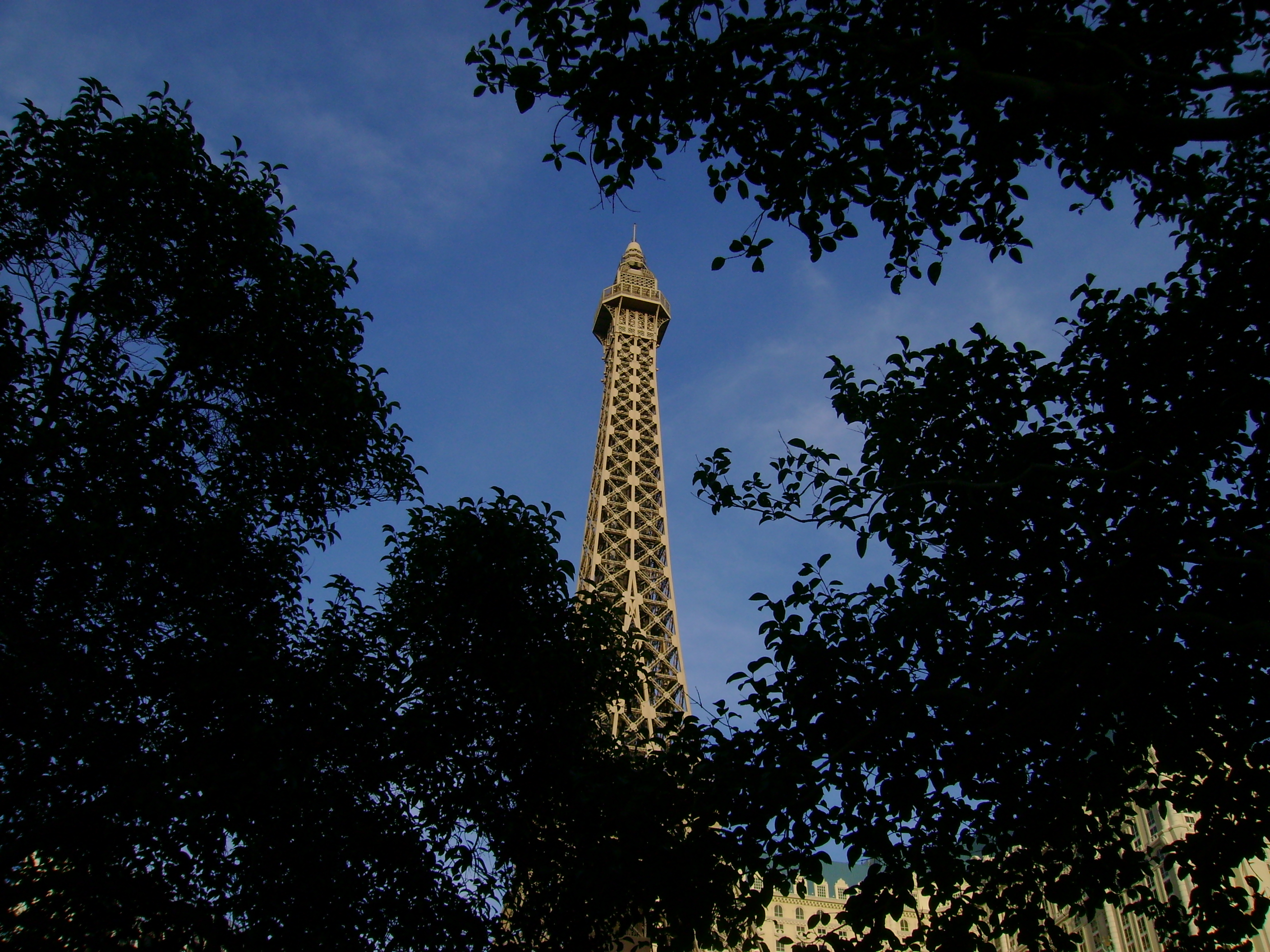 Then we did the IMAX film In Search of the Obelisk. This had potential. It would have been fun if they would have update the ride and adjusted the ride vehicle so that it wasn’t so shaky. I’m glad we rode, but the staff was lethargic and the ride needed some work. This could have been loads of fun.

Jon wanted to see the Fountains at Bellagio, so we decided to take a stroll down the strip. We walked thru Excalibur, then New York, New York and out on the strip. While not packed, it was fairly crowded for this being the slow season in Vegas. We walked down the strip shooting pictures of the casinos. Passing by a CVS, we stopped in to get some essentials like Carmex for my dry lips and water. Vegas is just so dry.

We made it to the Fountains about 30 seconds before they started a show. The show was set to the music ‘The Ecstasy of Gold’. This being Jon’s first time in Vegas, we headed across the street to go get something to drink at Bill’s Gamblin’ Hall (formerly Barbury Coast) and watched some of the people playing poker and roulette. Larry got a call that his friends had arrived, so he decided to head up to the Tropicana to meet them as Jon and I headed in to Paris Las Vegas. 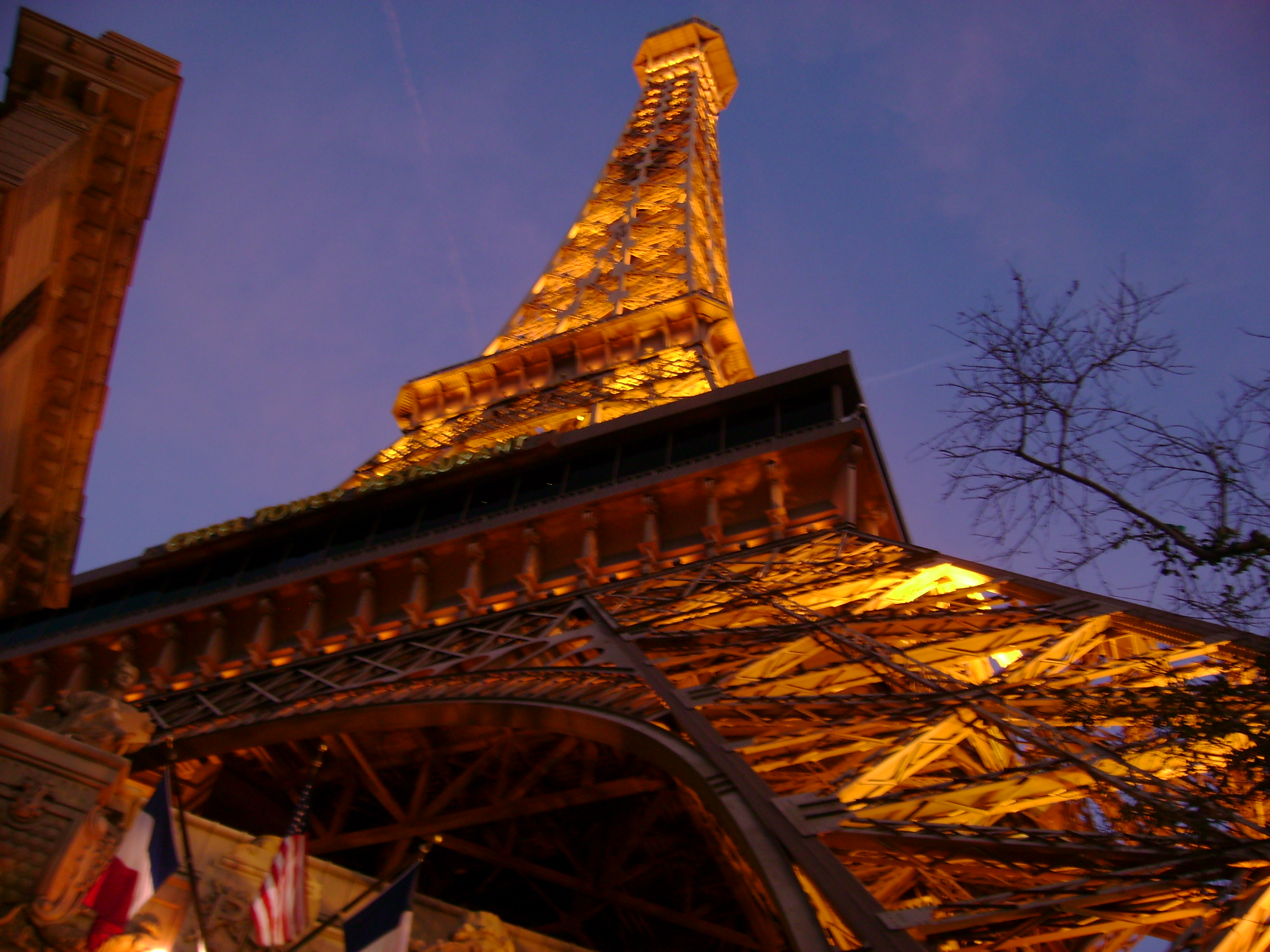 Right as we stepped inside some of the Paris showgirls were performing on the Casino floor. After they finished Jon got a pic with them and we decided to finally get at our first buffet as it had been several hours later since lunch. The sun set in Vegas at around 4:30 that time of year and it was already getting dark.

The buffet at Paris was really very good. There was more I’d liked to have tried. We wandered around the shops at Paris a bit and then headed out. It was getting closer to showtime, and I had to pick up our tickets for SPAMalot at the Wynn. We headed back to the hotel having already made plans to meet Larry and Corey by the theater. We grabbed our jackets headed for the Monorail station at MGM Grand.

This a mistake. Well, sort of. When they built the Monorail, the hotel owners made it so that you have to walk thru the casinos in order to get to the stations. Genius for them, but we ended up going in the front of the MGM Grand and following signs. That casino is HUGE! We probably ate up 30-40 minutes just trying to get to the Monorail station. This is on top of the walking we had to do from Harrah’s to the Wynn. We got to the Wynn and picked up our tickets 20 minutes before Showtime. We had to have picked them up at least 15 minutes before, so I only had five minutes to spare. Whew! 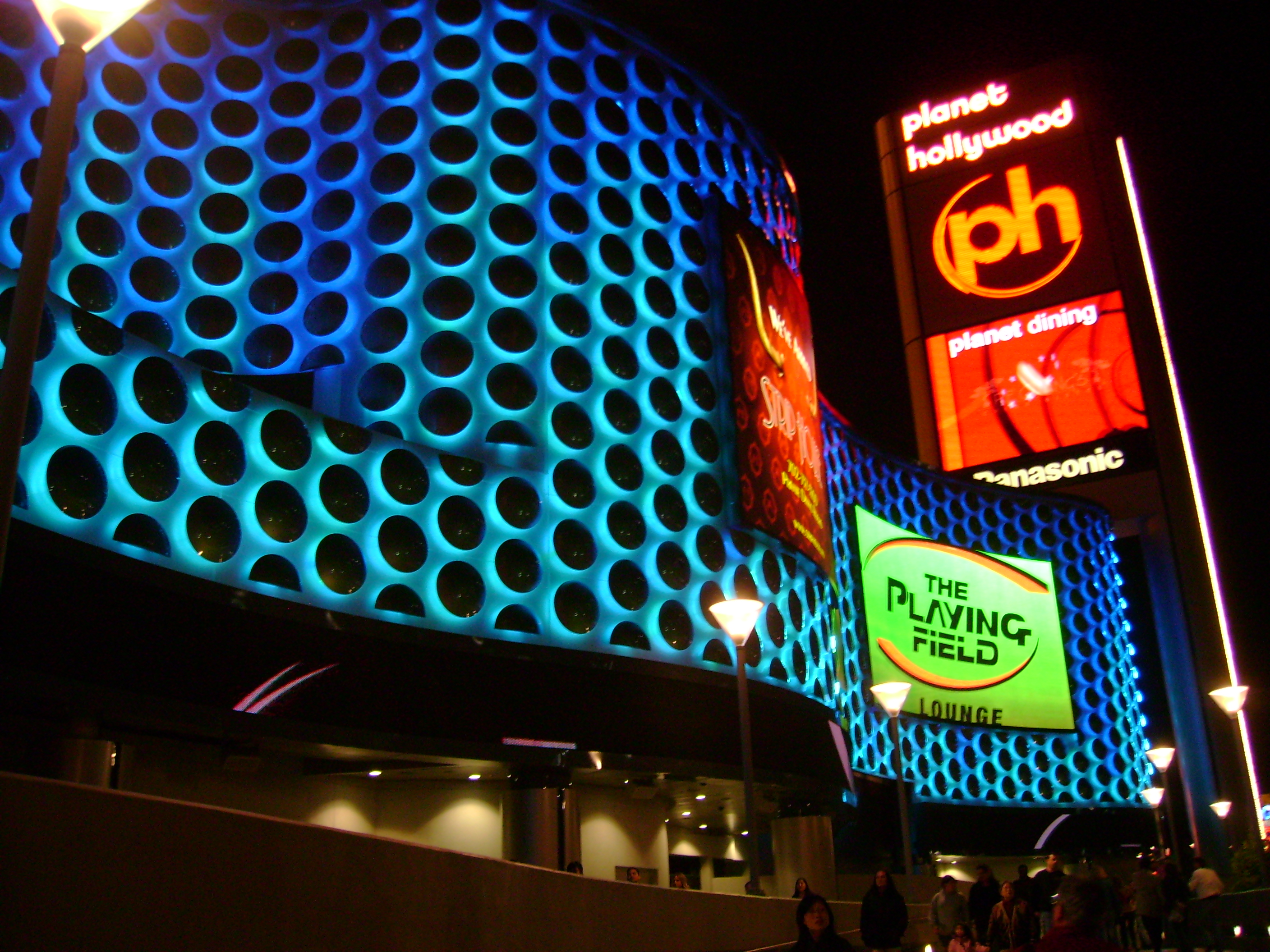 Larry and Corey met us as we headed into the Holy Grail Theater. SPAMalot was really awesome! The lead female really could belt out the tunes, and everyone in the cast was spot on. I’m not a huge Python fan, but I’d go see this again. The sets and costumes were really great, the stage was really cool, and just seeing all of this performed live was wonderful. I’m so glad we got tickets to SPAMalot. The show lasted 90 minutes. Afterward we went to the gift shop for just a brief moment and then Larry and Corey headed for the bus as Jon and I headed to the Monorail to use our 24 hour pass. Because we’d had a long day, the three of us headed back to the hotel and basically crashed around 10:30 PM.