My original spring plans included a visit to Carowinds on Friday the 11th, but due to circumstances beyond my control that didn’t happen. The main reason for the trip was my Season Pass processed. This was the first time I’d ever had a season pass to any amusement park in all of my 26 years. I considered stopping by Carowinds in March of 2007 while heading north from Florida, but decided to wait.

I knew I’d be in Salisbury in May and needed to get my Maxx Pass processed before June so that I could use it at other Cedar Fair parks. So on Saturday evening I visited with friends for about 15-20 minutes and then drove back to my grandmother’s house to change clothes and head out. The closer I got to Carowinds, the darker the clouds were. It wasn’t pouring, but it was sprinkling. I wasn’t super enthused about the trip and honestly, with the rain, I kept thinking “I’ll process my pass and leave. Maybe I’ll ride Top Gun before I go if the weather isn’t terrible”.

I had similar thoughts when I went to Kentucky Kingdom a couple of years prior, but that ended up being a really fun, short trip. This trip to Carowinds would prove to be just as enjoyable. After arriving I parked and noticed that a LOT of people were already leaving due to the light rain. 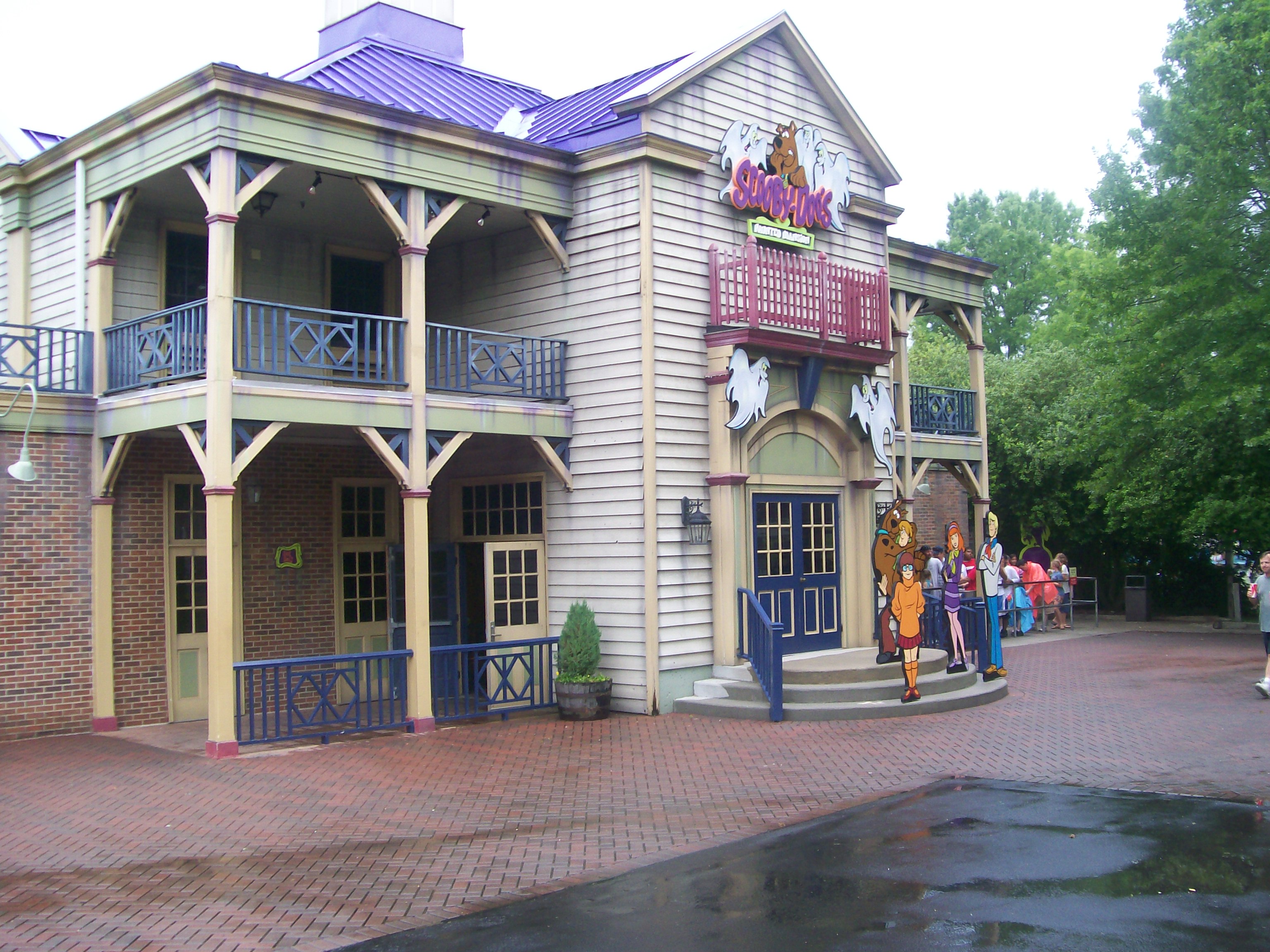 The rides were all running so I decided to stay and ride a few things. With my camera, cell phone, and season pass voucher in hand I headed to the front gate. Only one ticket booth was open, only one metal detector open and only 2 turnstiles were open. This was a great sign because no one was going in, but everyone seemed to be leaving, and it was only about 5:30 PM, with a 10 PM closing time. As I walked down the pathway I could tell the park was already under Cedar Fair ownership by all of the added trash cans.

After I was through the gate I headed to the Pass Processing Center. Only 2 people were working cameras because it wasn’t busy. In about 5 minutes I had my brand new Cedar Fair Maxx Pass, my first ever Season Pass. Yay! I knew I’d get my moneys worth out of the other Cedar Fair parks I’d be visiting in 2007. Paying only $80 for all of the parks I’d be visiting was a major steal.

There were two things I noticed with Cedar Fair now operating the park. First it felt like the same old Carowinds I’d been going to for the past decade or two. Second is that as a coaster/theme park enthusiast, I could tell that the park was in transition. There are still some remnants of the now defunct Paramount Parks branding, but seeing pictures from earlier in the season, there seemed to be even less on my visit. I expected all of the signage that said Paramount to be gone after the first year. The music playing in the park was also different. Gone were the days of Paramount & Hollywood themed music. The soundtrack was a bit more up to date. 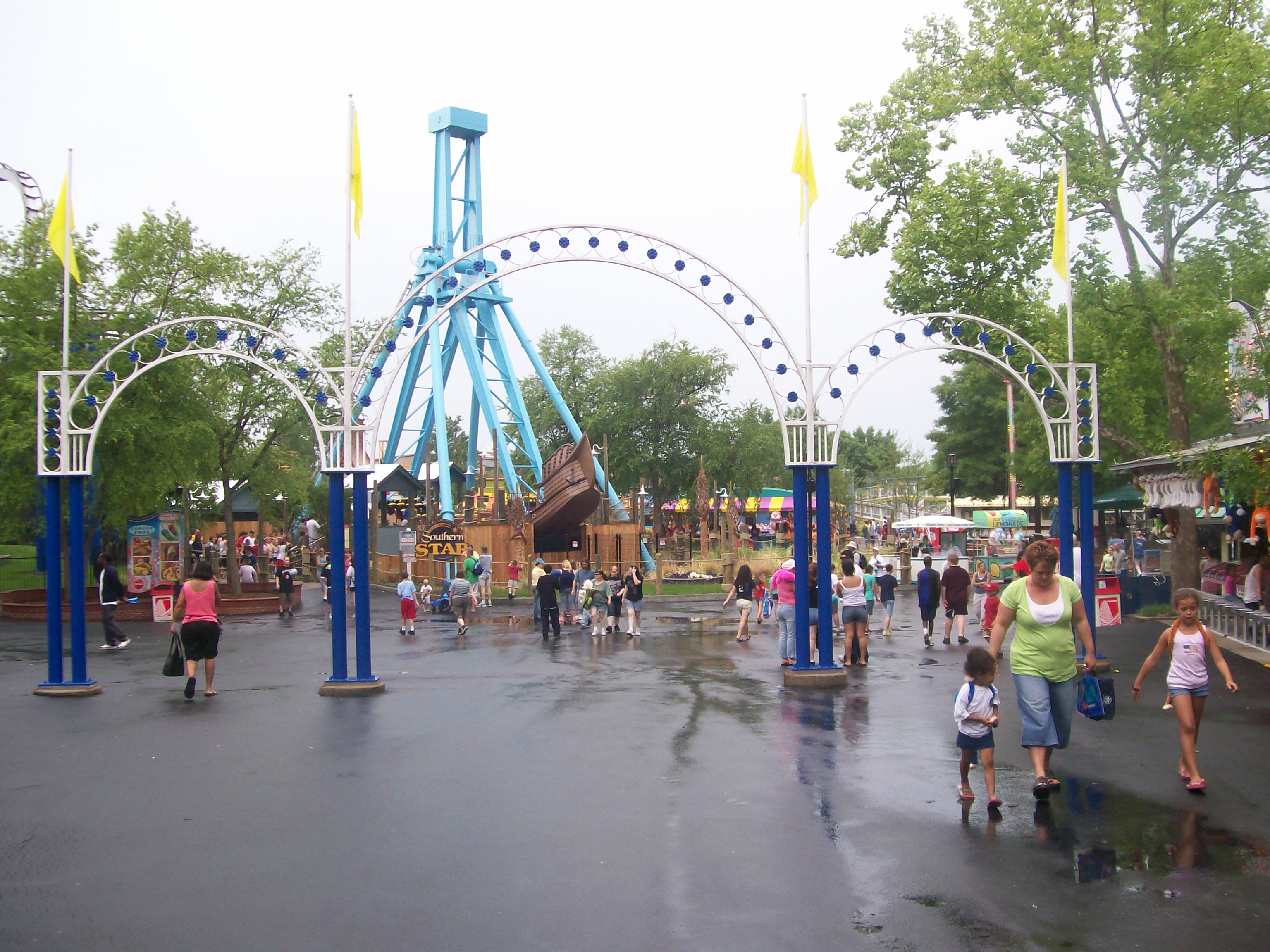 After processing my pass I headed over to County Fair. My mood ad already improved, and the rain was moving out of the area. Southern Star (formerly Frenzoid) had been moved to this section of the park and was the first thing you see as you enter. I’m glad they brought back a classic adult thrill ride, it looks great in it’s new home.

The line for Top Gun wasn’t very long; I may have waited about 20 minutes. There were, however, some kids smoking in line. I’m all for smoking if you choose to, but I have allergies and other minor respiratory issues. I’d rather not have smoke literally blown in my face. Oh well. I didn’t get a front row ride because that was an extra wait, so I rode in the next to the last row.

Top Gun–They had added on board cameras for every seat so that you could purchase your on-ride video. It was neat to watch, but I wasn’t interested in buying it. As far as my ride goes…I don’t know if it was the rain or what, but this was by far the BEST ride on Top Gun I’d ever had! I love Top Gun, it’s one of my favorite inverted coasters. But the past few years the ride was more intense than I preferred. Not this day. The first drop was really good, but the next set of inversions were smooth and I even felt the airtime I’d never felt before on the Zero G roll. The hill over station provided more airtime than I’d ever felt on an inverted coaster. And the corkscrew didn’t feel too intense. This was the best ride I’d gotten on the coaster since it opened. 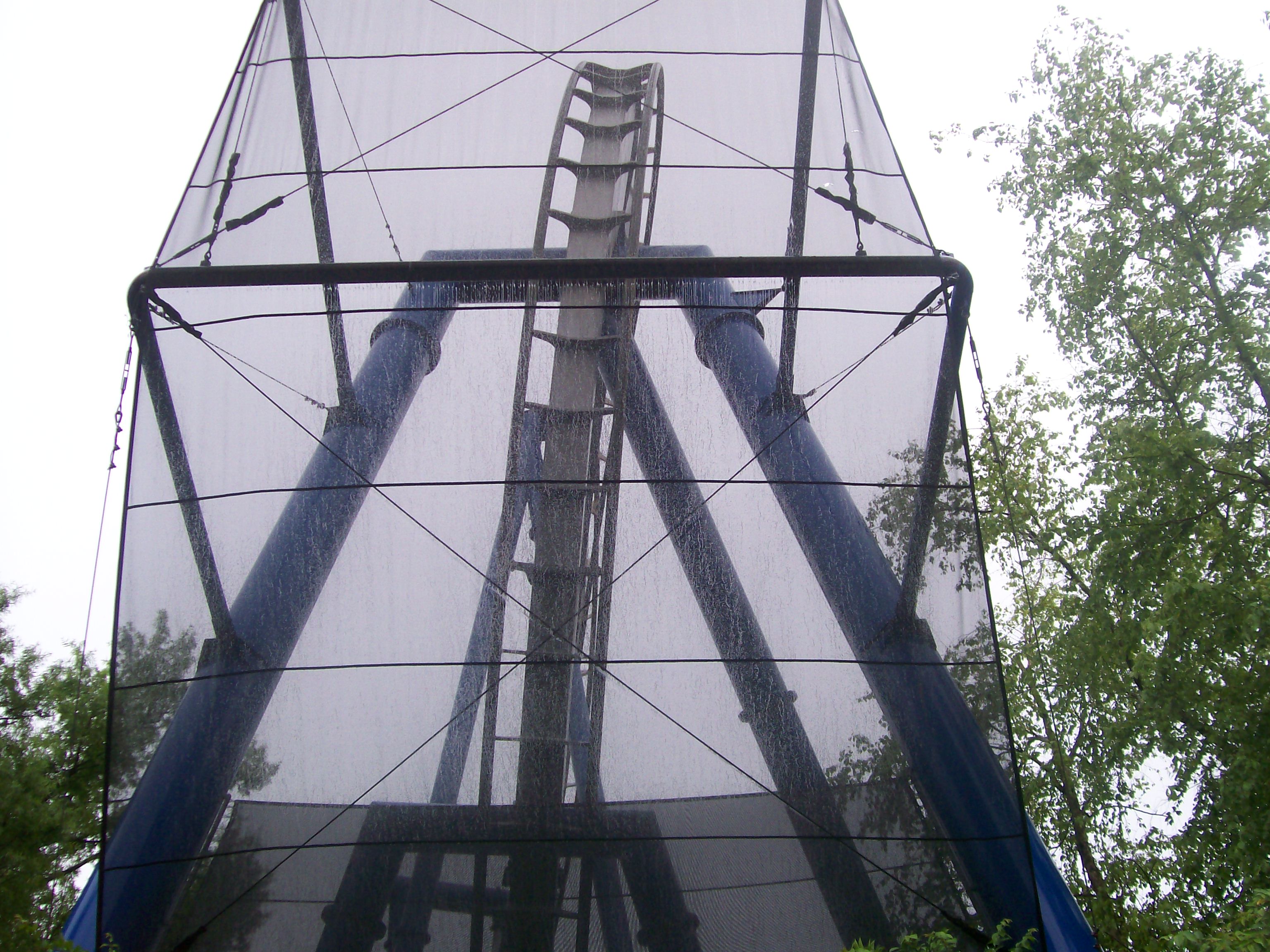 After riding Top Gun I headed to Thunder Road. I had gotten some great rides in the back seat of the backwards facing train the previous year. There were about 6 or 7 people in line for the ride. And the crew was not only doing a great job getting people on and trains dispatched, they were really pumping up the crowd, no matter how small. If this was a product of new management, I really liked it.

Thunder Road (backwards)–The track was visibly wet. The last seat facing backwards was always great as you don’t see anything but the track facing backwards. There were a few slightly rough spots, but nothing painful. I loved the whole ride. This was the fastest I’d ever seen it go up and around the turn around at the end of the ride, likely because of the wet track and lowered friction. There was airtime on every hill.

I was tempted to stay on the train as the ops said people could stay in their seat if no one was in line for their row, but when we arrived at the station the queues were full. I could have got back in line and rode but I wanted to ride the other side to see if it was giving just as good a ride as the backwards side. The attitudes of the ride ops on the forward side was the opposite of those working the backwards side. Not so friendly, no speiling. And the operator running the forward side closed the gate so that I couldn’t get to my seat, was told to re-open, and as I was walking thru Closed the gate ON me. Ouch. But that wouldn’t be the only pain from the forward side. 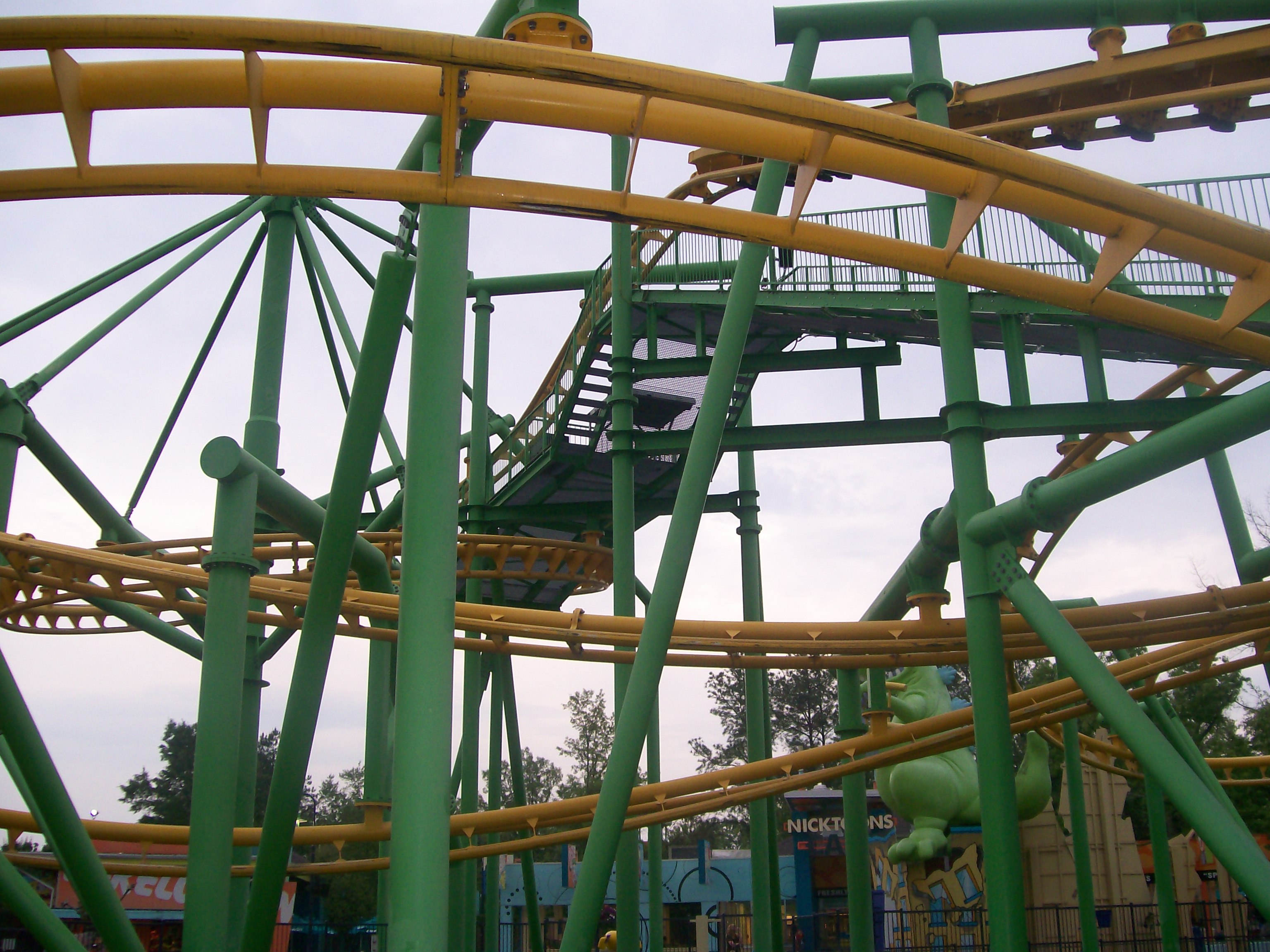 At this point the only rides that had long lines were Reptar, BORG, and Top Gun, which had a 20 minute wait. But after riding Thunder Road the lines shortened even more as rain rolled back in. I toyed with riding BORG, but wasn’t up for it. Besides it was stacking on the brake run, and I don’t like to be stuck with my head below my feet. I took some pictures and even some off ride video of Top Gun. To check the rest of the park’s lines, I walked thru Carolina RFD and Carolina Boardwalk to Thrill Zone. There was virtually no line for Drop Zone so I got in line. I think I waited 3 or 4 cycles before riding.

Drop Zone-I got on and we started moving toward the top. Drop towers like this really scare me as I’m afraid of heights but I’m getting over my fear a little. I guess we’ll see when I ride a larger model. The drop is always good, and this is one of the only type of rides that actually thrill me. There’s nothing like dropping out of the sky a few hundred feet or so. 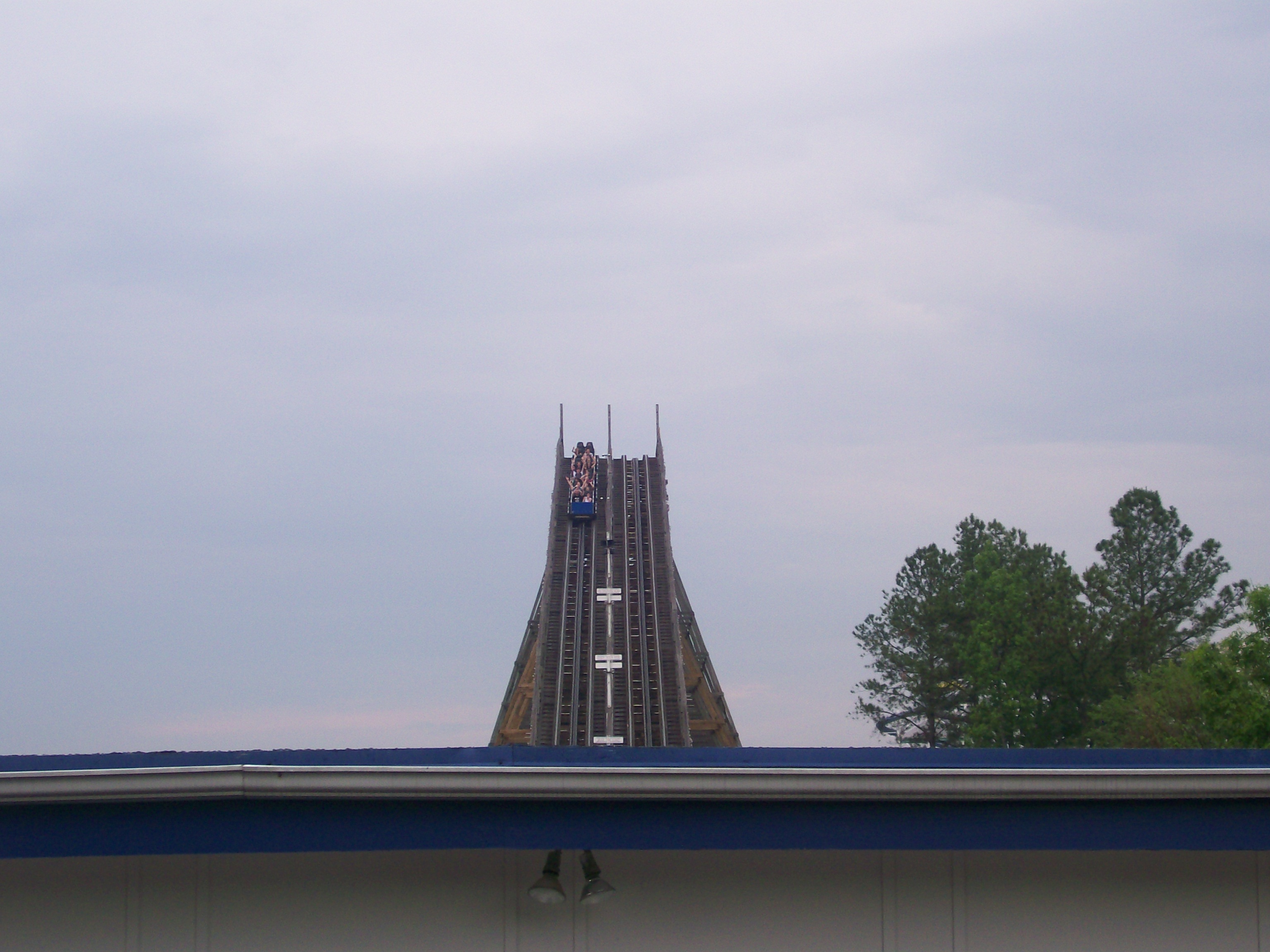 After Drop Zone, I reluctantly went over to Hurler. The last time or 2 that I’d ridden Hurler it was really painful, but I decided to give it a shot to see how it was running. And yet again. The line was non-existant.

Hurler–It wasn’t running bad. There were a few rough parts, but they weren’t as bad as Thunder Road Forward. It was running fast, and I was sitting towards the front of the train. I like Hurler when it runs well. It was a vast improvement over the previous year. Maybe one day it’ll get a full re-tracking.

I walked over by Ricochet to see it running, but not open. They were running empty seats. I knew it would probably run later so I headed back to the front of the park. Jon had called while I was on Hurler so I called him back and chatted while I walked over towards Nick Central. When I arrived I saw that Runaway Reptar had no line to speak of so I decided to ride. 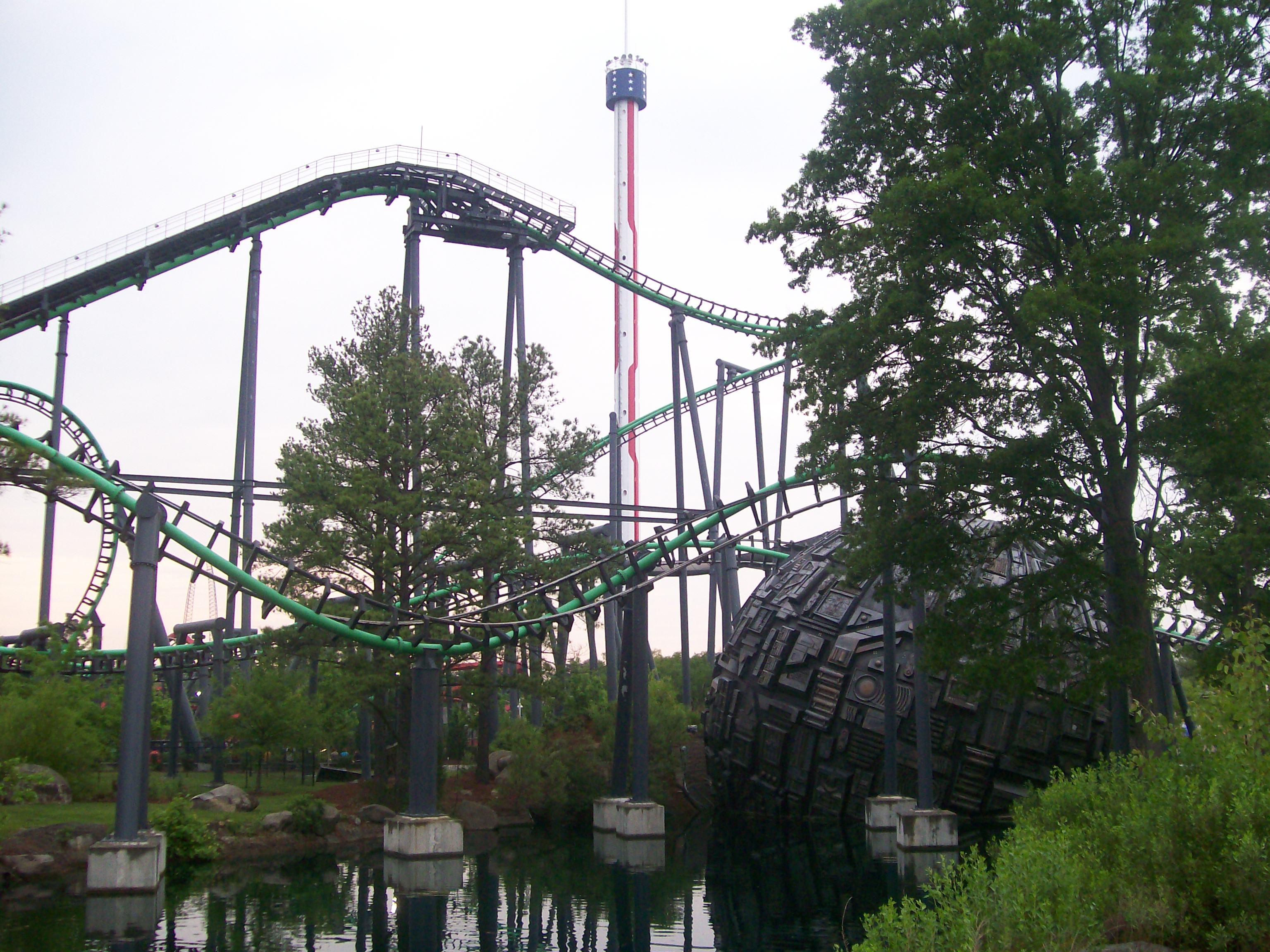 In line, a father and son behind me were goofing off and playing around. The son was maybe 5 years old. The father kept hitting the son on the head with a wrapped up plastic poncho, so the son turns around and punches the dad below the belt, sending him doubled over in pain. The son was laughing, that Dad was actually laughing, and I was laughing. At that point, the dad looks at the son and said “That wasn’t funny!” I looked at the dad (laughing) and said “Maybe not to you…but it was to the rest of us”. The dad couldn’t stop laughing and the son was on the floor. Fun times.

Runaway Reptar–This is always a fun little ride. There is a slight bit of headbanging going  but the ride itself can be quite fun. The placement of this coaster in the park was really well done. Not really thrilling, but I’d still take one in my back yard if I had a couple million lying around.

Afterwards I stopped at the Nickelodeon Café for pizza and a cookie and ate that on the run over to Rocket Power Airtime. I got in line, but you have to have a seat partner and I didn’t want to be forced into a seat with someone else. The pizza I’d had was okay, but the cookie was really good. I made my way back over to County Fair. This time, the line for Top Gun was just at the bottom of the steps so I decided I’d ride again at sunset. It wasn’t quite as good as the first ride of the day, but Top Gun has never given me a bad ride. 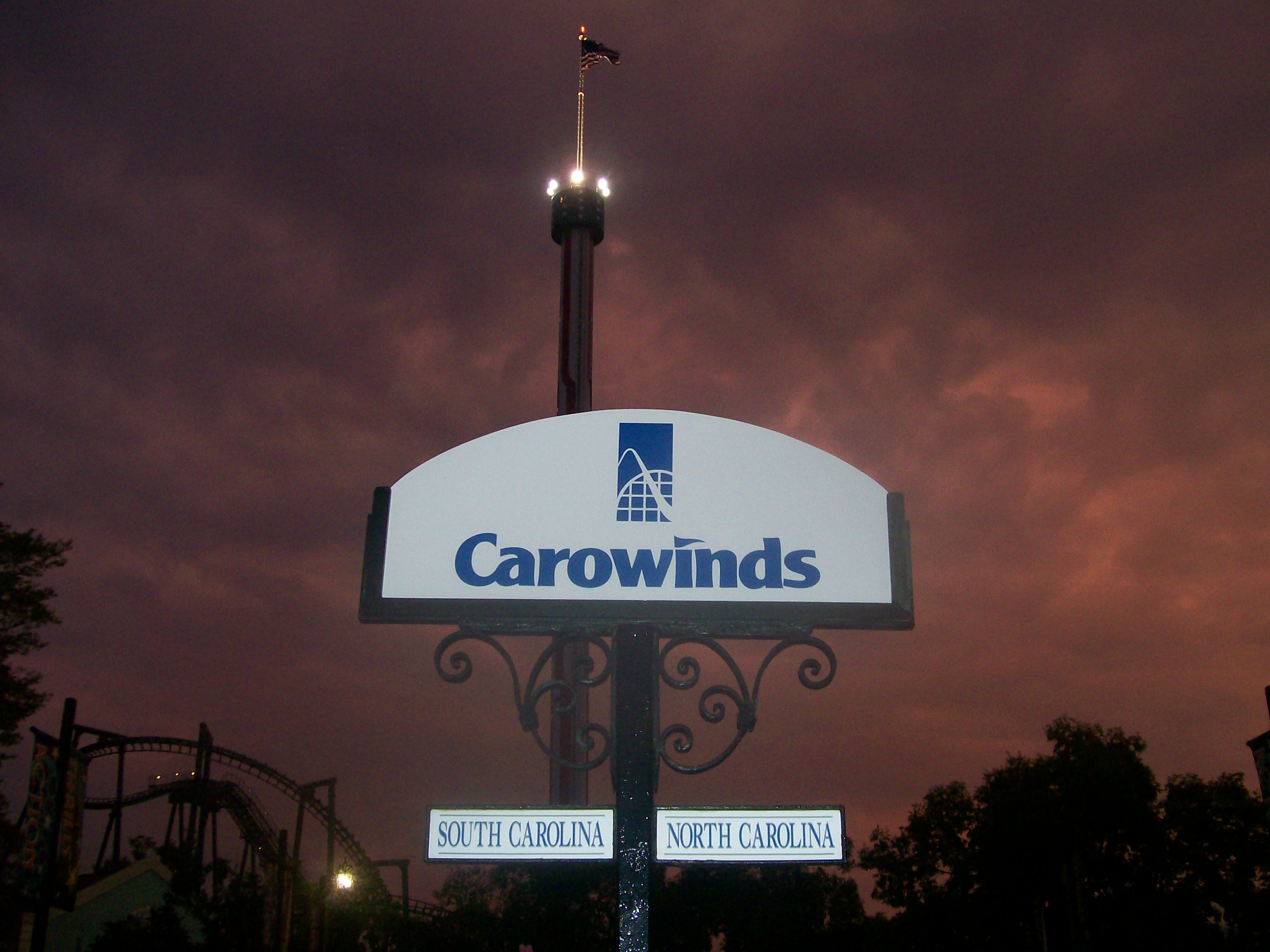 Walking around and taking more pictures, I headed over to see the water effects turned off of Flying Super Saturator. The water guns were on, but I knew I wouldn’t get soaked with those, so I decided to give it a spin since there was only about a 1 train wait.

Nickelodeon’s Flying Super Saturator–I wanted to face backwards, but I ended up facing forward instead. I dropped my water bomb successfully on a group of teens. Well, when I came around the 3rd bend, they hit the button on the geyser and completely drenched me. I wasn’t expecting it, and really didn’t want to be that wet for the ride home. I wish I’d have rode early on instead now. Oh well.

Ricochet was running with people now, but the line was longer than I wanted to wait so I decided to leave. The long, wet walk was an interesting one as I ran into some random guy that felt we were connected cosmically. After getting back to my vehicle, I put my large sun blocker for the windshield on the seat so as not to get it wet. It worked really well. Stopped and got gas, missed an exit on the way back to Salisbury, got turned around and found my way back to my grandmother’s all before 10 o’clock. This was probably one of my favorite trips to Carowinds ever.