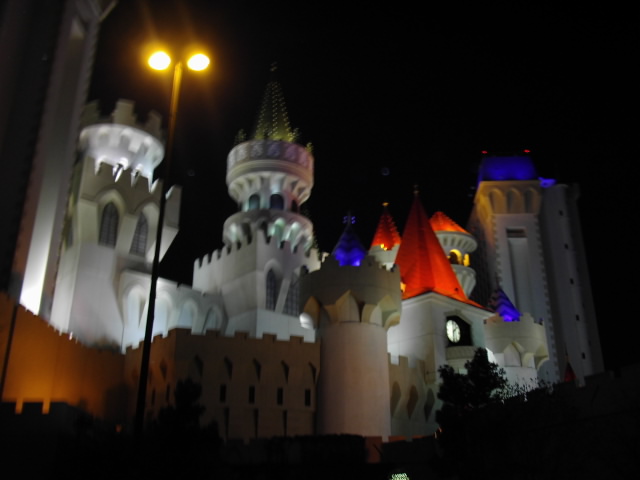 We woke up Wednesday morning a bit later than we had planned. We’d wanted to go explore Hollywood that morning, but once we woke up and got ready Jamaal had a different idea. We had seen a huge shoe store on the way to Disneyland the day before and he definitely wanted to stop by before we left Anaheim, but first we had to go to Downtown Disney for a few souvenirs, so we checked out and made our way back to the Disneyland Resort.

There was a 15-minute parking area for dropping off/picking up and since we were picking up stuff from the gift shops I figured we’d just park there since it was just a run in, run out kinda deal.

Once we arrived at Downtown Disney we stopped into the first store and picked up a few shot glasses, magnets, and key chains. There were some Mickey gloves for sale but I wasn’t spending $17 for them this time, so I got the one thing I was determined to get for my first trip to Disney: Mouse Ears. I got the traditional Disneyland Mouse Ears as I’d been wanting a pair for ever. After we finished shopping Jamaal took a picture of me by a fountain and we were back to the car in about 20 minutes.

After getting back to the car we headed to the shoe store, after stopping once again at Carl’s Jr. and Jamaal suggested leaving early for Las Vegas. I thought about it for a second and gave in. More time in Vegas was fine by me. I’d hoped that since we’d be in Hollywood Friday maybe we could head to Venice Beach and get photos of the Hollywood sign.

We shopped for shoes and then asked for the best directions to Vegas, then it we were off. The drive was just at 3 ½ hours out in the desert. We gassed up and got more food for the drive at Quiznos and Starbucks on the outskirts of Los Angeles on the advice of the guys at the shoe store. Then it was off on the most beautiful drive ever. The snow capped mountains and desert terrain was stunning. Traffic moved swiftly, rarely reaching below 90mph for us. We passed by Calico Ghost town and then into the desert. It was beautiful. We came through Primm where Buffalo Bill’s is located, getting some decent views of Desperado. We arrived in Vegas at around 5:30 PM. Traffic was getting congested closer to the city, but it wasn’t far to our hotel. The Excalibur was right off of the exit, and very easy to find. 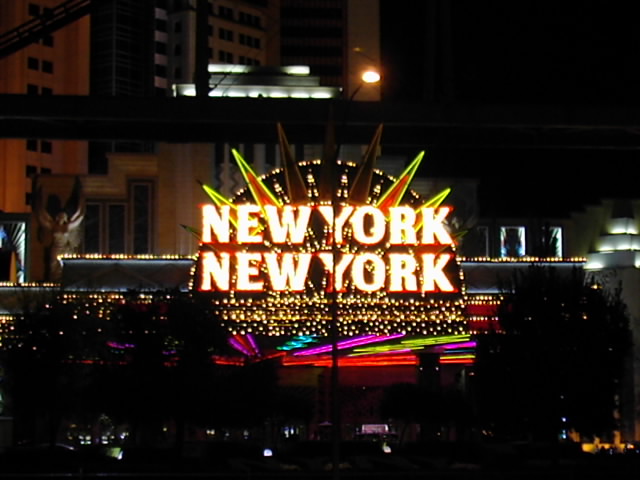 I had heard mixed but mostly negative reviews of the Excalibur. “Enjoy all the Kids”, “Its a bit run down”, etc. But in reality, Excalibur was nice, clean, and convenient, located just across from New York New York, and just beside Luxor and Mandalay Bay. We checked in (no screaming kids yet, this was March after all) and made our way up to our room with the luggage. By this point, the sun had set, and we were ready for a nite on the town. First things first, there was a coaster staring at me from across the street. It had a mean grimace and I wanted to get it and it’s bad reputation out of the way. So we made our way over the walkway above the freeway and into the NYNY Hotel and Casino.

But more importantly, we walked first right into the Coyote Ugly bar there. They were having a two for one special so I bought an overpriced Long Island Iced Tea and gave the other to Jamaal. We wondered around NYNY a bit before finding the station to Manhattan Express. Once there, I couldn’t believe the almost $20 price tag (for one ride, mind you) they were charging for a Togo…

But it was a one-time thing, so we paid and made our way to the front of the train.

Manhattan Express–The chain lift was smooth. Actually, the ride wasn’t the roughest coaster I’d ridden or ever ride. The only thing keeping me from a re-ride is the price. You go up the lift (over 200’) and then hit a fairly short drop, back up, and then its inversion time. The loop was decent, but I really did enjoy the Twist and Dive. We need more of these some day, please. The trains are cool to look at, but the restraints were weird and uncomfortable. Ah well, another credit down, and I’ll not have to do it again on this trip.

So we went back to the Coyote Ugly bar. It was expensive, so I let Jamaal get himself something to drink. The greatest thing about Las Vegas is the fact that you can have alcohol whilst walking down the street there. So we did. We walked to the MGM Grand and made a left towards Paris, Bellagio, and Cesar’s Palace. The strip was magnificent. We walked and looked around quite a bit. Once we got to Bellagio we crossed over to the other side of the street towards Paris and Bally’s. I would like to have gone to the top of the Eiffel Tower but we didn’t. 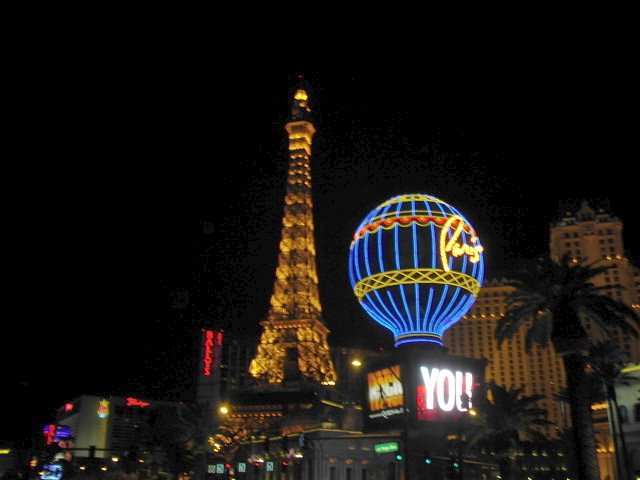 Normally I try to tip well because I’ve been reliant on tips. But our bar didn’t seem to want to wait on us. He got us our first BOGO drinks and then never came back to us. I left a decent tip, but I guess he didn’t want any more money. In fact, he wouldn’t even come by to pick up the tip. Sine we didn’t get any other service from the bar. Since we sat there so long waiting on our drinks, I picked up my tip and walked off, as the bartender wouldn’t come back to our side of the bar even when we tried to motion for him. His loss.

Instead, we saw a Roulette table. So we went to sit down. But before I finished pulling out my seat, a very nice waitress came and took our drink order. I got an Absolut and Jamaal got another Long Island. She got a good tip. We sat and watched at the roulette table, asking questions about how to play while getting a couple of drinks from our waitress.

But enough was enough and I had called Dawn Marie once we got to Vegas to set up a dinner date with her, Danny, Kristin and Jeff. We went back out to the strip to do some more wandering around. The group was staying at the Stardust so we took a cab. Then the six of us headed out to a Las Vegas classic, The Peppermill, which was basically an overpriced Denny’s with a bar. But the inside of it looked like cheesy Vegas lounge. I guess it kind of was. And I loved it.

Dinner was okay food wise. We headed back to the Stardust with the gang, and then Jamaal and I headed out. I was getting ready to get a cab but Jamaal said “We can walk it, it isn’t far”. The Luxor is not close to the Stardust. An argument ensued while we started to walk to the other end of the strip to the Excalibur. I knew this wasn’t a close walk. Eventually we got separated and both took cabs back to the room to sleep. 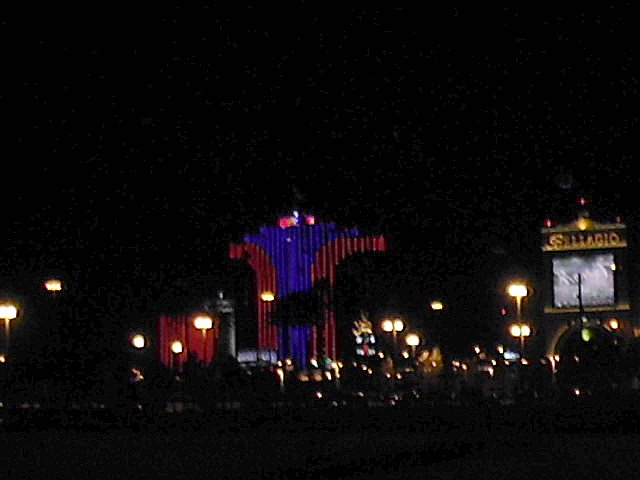